After our bicycle rickshaw ride through the Chandni Chowk Market we load into a bus for our next destination. Street hawkers persistently pursue tourists with their wares for sale. Our guide, puts on a “bus bazaar.” For instance, the man in the white shirt is selling the beads he wears on his head. After we are seated, Ranvir  holds up their wares and gives the price. If he thinks the items are of decent quality,. he holds his thumbs up.  If not, he holds his thumbs down. We pass items around before we decide.. There are usually five to six vendors crowding around the bus entrance and someone always buys something. 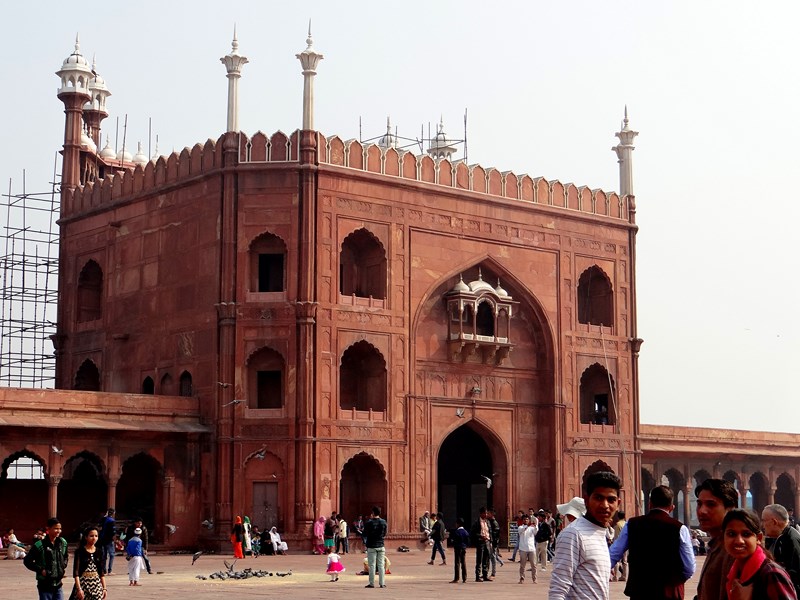 We arrive at the Jama Masjid Mosque, the largest in India. This is the outside entrance gate, swarming with people.

This is the inside at the back of the temple, also swarming with people. Hard to tell the difference. 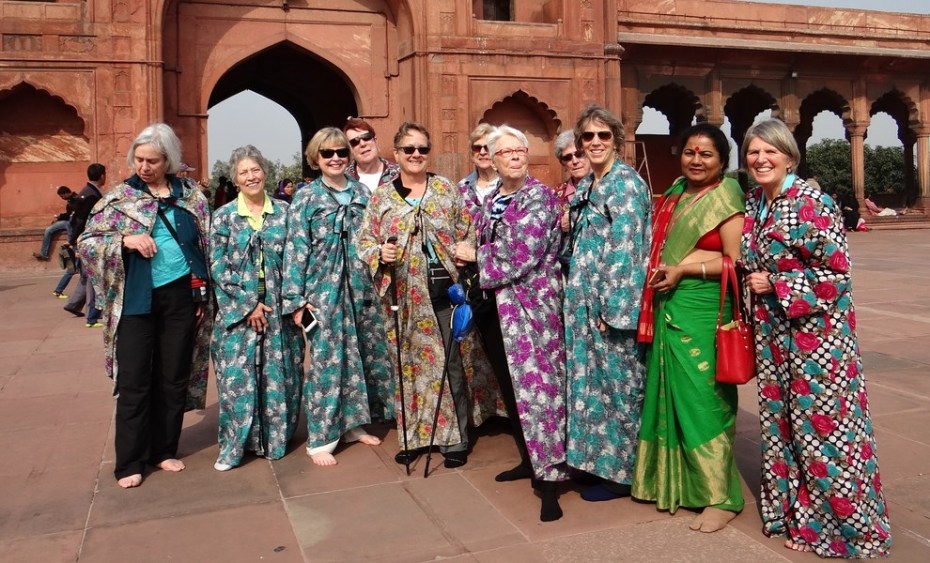 This is a Muslim temple and we must wear cover-ups, provided, and no shoes are allowed. This is the women of our group, from left, Carol, myself, Kathy, Pam, Ellen, Diane (almost hidden),Trish, Sandy, Chris, our guide and Hazel.

While Manju gave us a history of the temple, Indies gathered around interested in we tourists. This fellow wanted his picture with Theo. I took one and he had his friend take one for him. Then followed about six more guys who wanted pictures and we finally had to refuse anymore pictures.

A huge pool sits in the center of the square, where people wash their feet, and hands.  I just missed a picture of a guy swabbing his beard. They come to pray. 25,000 of them can fit into this square.

This arch is beautifully inscribed in marble. Muslim religion does not permit idols, there is only the holy words of the Koran. This arch leads into the entrance to the tower, where the Iman calls the prayer.

The tower is I believe over twenty-two meter’s high and is now closed to tourists because of a suicide.

This carved marble gate allows worshipers into the Iman’s area of the mosque. Except for tourism, The mosque is now used only on festival days.

Heavy, ornate doors can be closed. It is interesting that in ancient times, people did not use tables or chairs. They covered their stone floors with carpets and sat cross-legged and did all their business from the floor.

People feel quite comfortable laying down to sleep, or rest, or sit cross-legged just about anywhere in public. 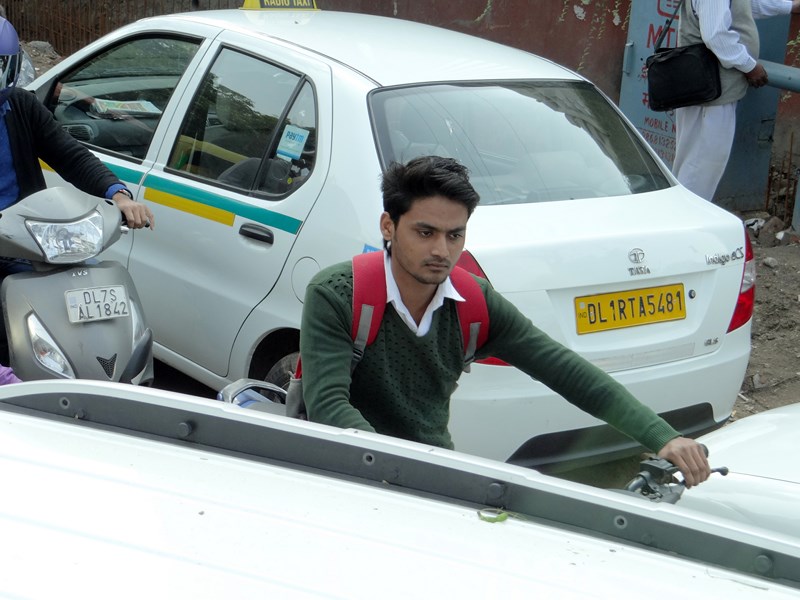 Back into the crush of traffic, we drive around the city as Manju Sharmi gives us a history of the seven cities of Dehli.

This load is so high, it reaches the bus window. Had it been open I could have reached out and touched the boxes. 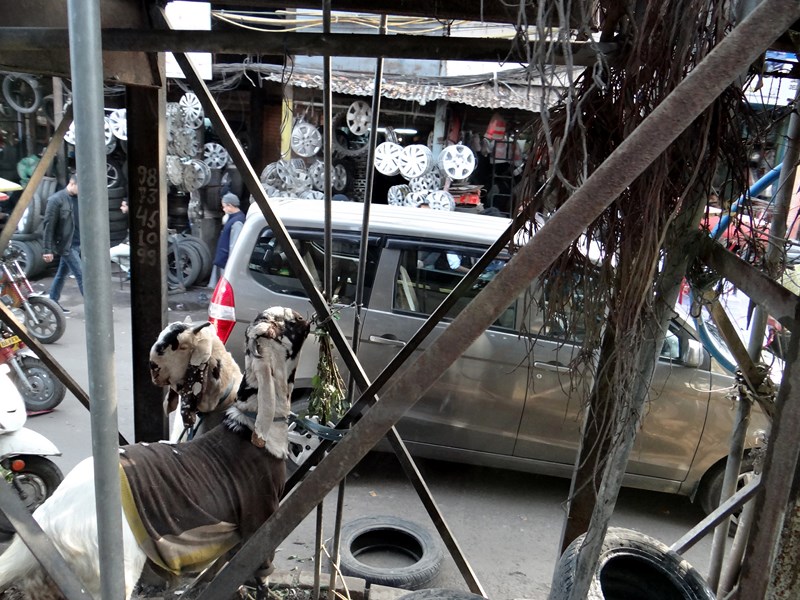 We first drive through Old Dehli, pronounced Dealie with a history of 500 years.  The city transformed and rebuilt seven times But this part of Dehli is the squalid, crowded lanes where only the poor live. 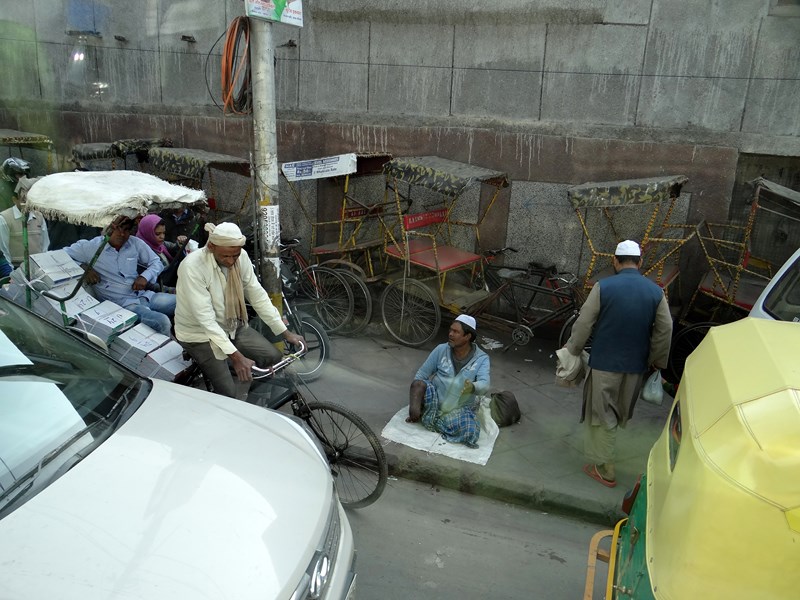 A one-legged man begs in the street. 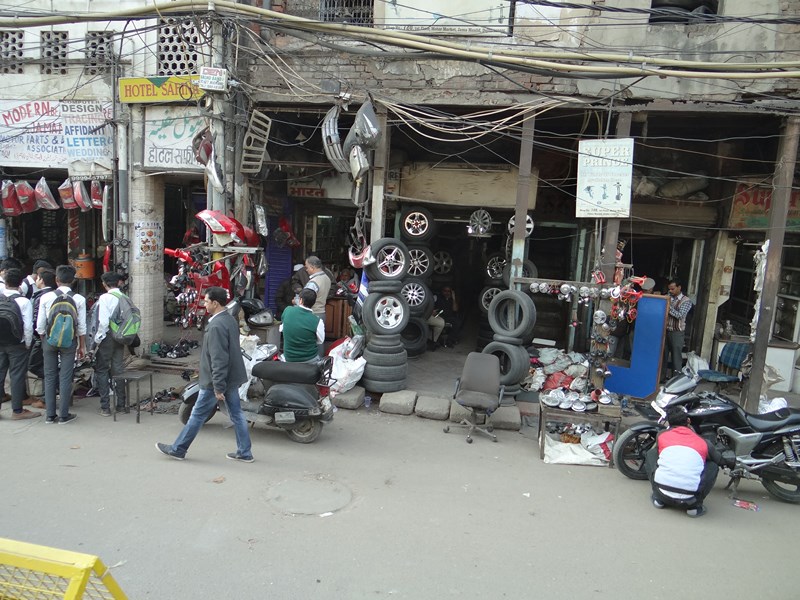 Commerce is very local. You can find live goats, chickens, and ducks for sale.

This man is selling fried chicken. Ranvir described it like this. “It is crispy chicken, beloved by all. It takes on more flavor as the day goes on with the dust and diesel fumes enhancing its flavor. I would die if I ate that food, though I used to eat street food. The people here have a powerful immune system it doesn’t bother them at all.”

When your vehicle is overloaded, you can use it like a wheelbarrow. Look at the snarl this load is headed for. Take note of the electric wires hanging on both sides of the street. 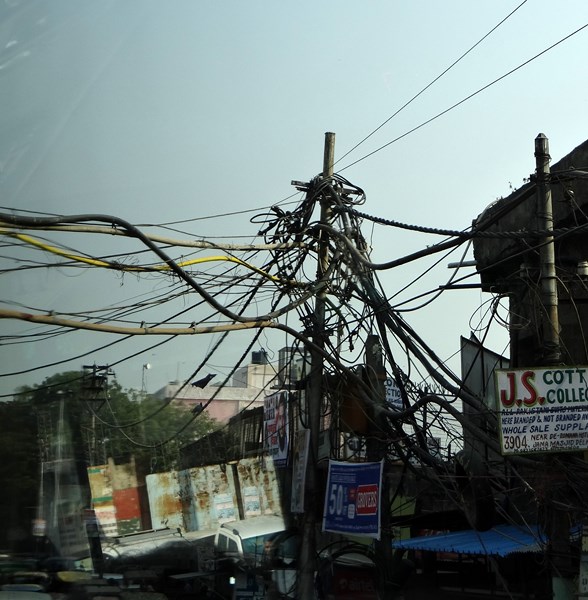 It is not my intention to make fun of these people and their way of life. They are survivors and they work hard and do what they can  to keep body and soul together.

Pictures taken from the window are subject to movement of the bus and glare, but notice the tangle of wiring above this juice stand. 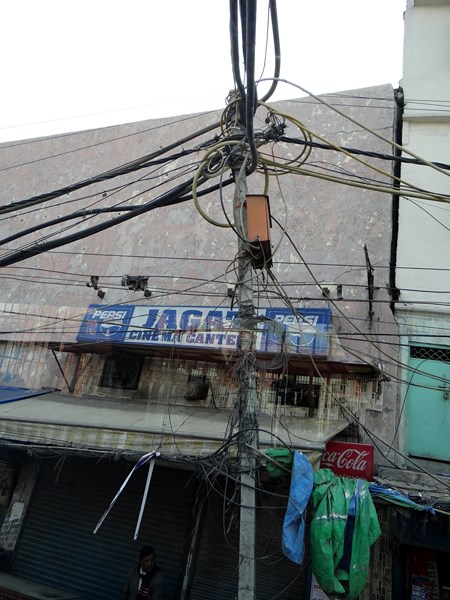 We see these pictures on the internet and laugh. One can’t help but think of the safety regulations we live with and how can this be maintained without fires?  In fairness, on our entire trip, this is the only place, in this poor neighborhood, in old Dehli, where this wiring situation exists.

The window is a sideshow while Manju gives us some interesting statistics. One child is born every second. The city has 16.5 million people.

The wealthy keep their homes from generation to generation. Sixty % of Indies rent. The city covers 1,408 square miles.  India has the second largest population of Muslims in Asia second only to Indonesia with 14.2 billion. India is 86% Muslim. We are headed to visit Mahatma Ghandi’s resting place. More tomorrow.