Interesting that this small town of Newport  has the tallest remaining lighthouse,  and the smallest remaining lighthouse in Oregon. Yaquina Head Lighthouse is  the tallest, at ninety-three feet, and 114 steps. In fact, if you put a dollar in the tank at the top, you get a pin declaring you survived the climb. The keepers had to be in good shape after working this lighthouse carrying oil cans up those stairs to the lense. This lense is one of the first Fresnel lenses and did not rotate. 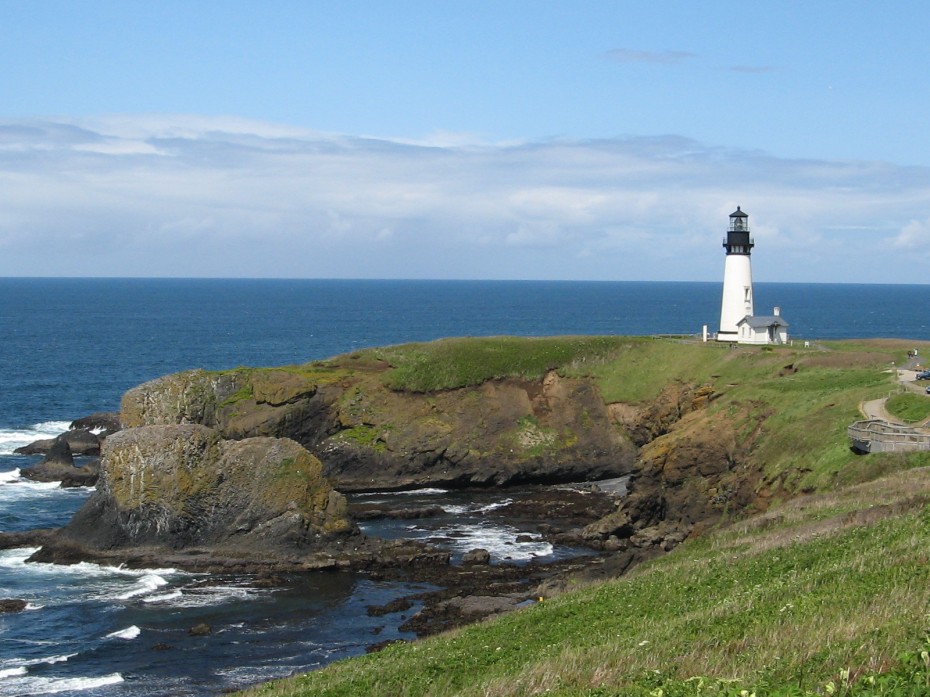 The small building next to the lighthouse is the oil house. The keeper’s residences were removed over a period of years when no longer needed.

The oil supply containers remain from the old days. Imagine hauling oil up this steep rocky point with just ruts for a road in the 1800’s. Its not easily accessible even today. It requires a 12 minute walk to get there on a nicely provided even surface. The point is 162 feet above sea level.

The keepers desk remains as well. The keepers were instructed to record everything about them, whether it was windy, raining, foggy, sunny,  the temperature changes and times, ships seen, ships lights seen,  but also such  mundane things as debris on the beach. If there were lightening strikes, an inspection or a ship smashed on the rocks, things got exciting. The logs were kept partly to alleviate boredom. Keepers were provided  a boxed library to encourage them to read and better their education. 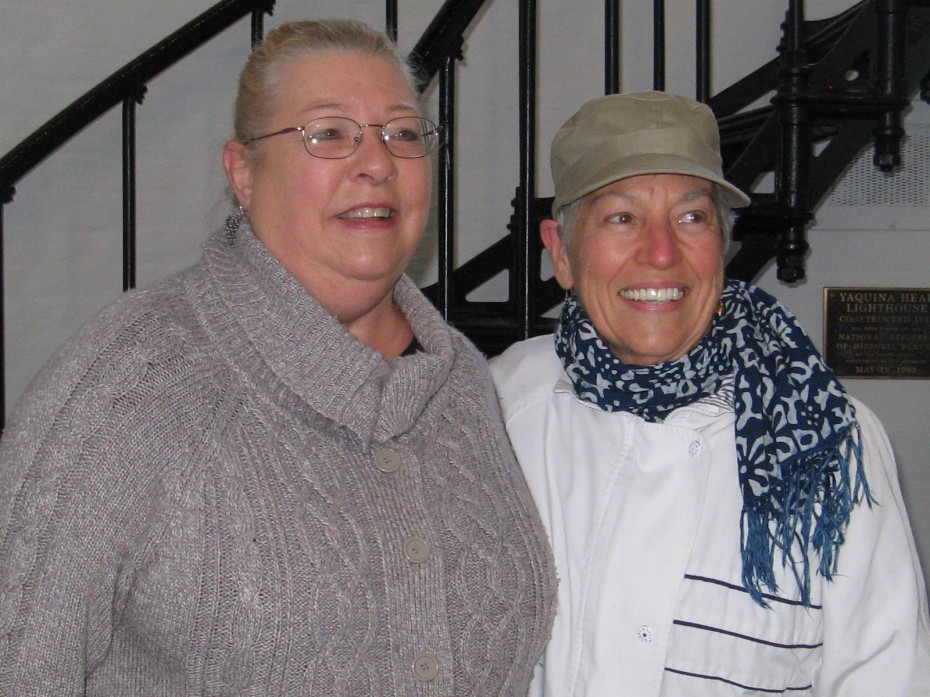 Waiting in line to get up to the top, I recognized this woman I know from my neighboring town of Sonora. She is Dr. Ralph Retherford’s secretary, my own family practice physician. What are the odds?

Below the lighthouse the beach is rugged, rocky and attractive to seabirds that feast on the mussels at low tide. The tide pools are available for sightseeing by traversing eighty-six well built, safe steps to the bottom of the hill. Walking across the volcanic cobblestones that make up most of this beach was a bit challenging for those in good physical shape.

The cobblestones were formed when lava hit the cold ocean and made instant stone droplets of all sizes. The tide pools had fat, green sea anenomes some round and some oblong. Kelp strands unfamiliar to me and starfish. 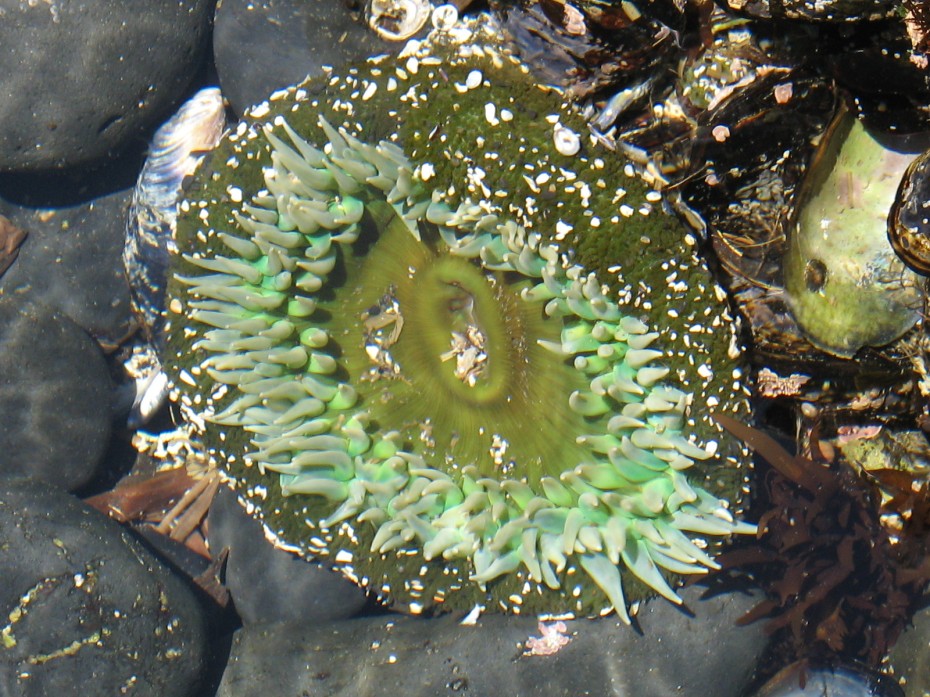 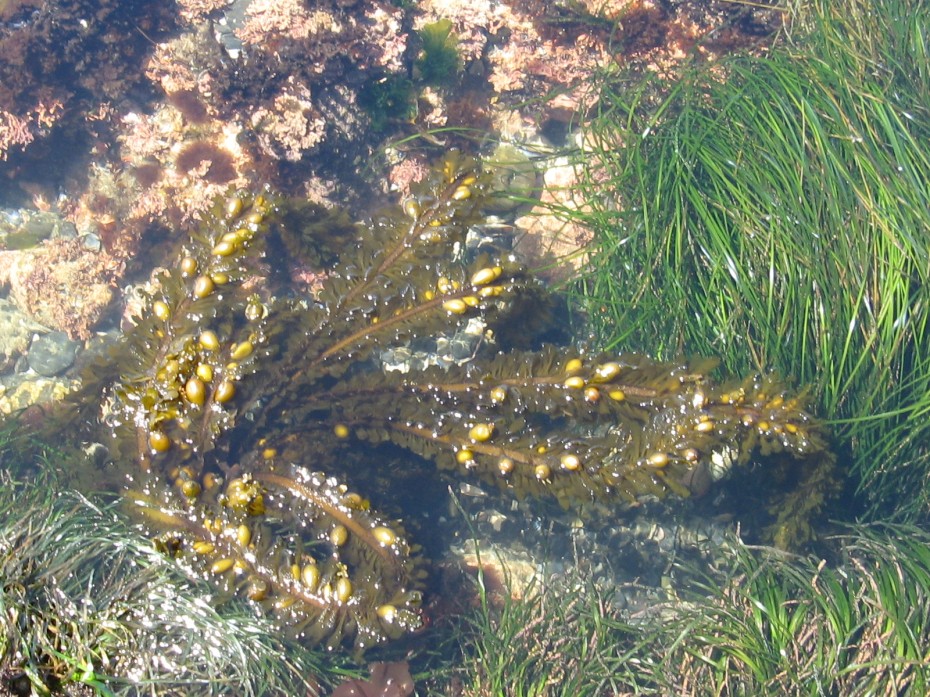 It would have been nice to pick up some mussels for dinner but no harvesting was allowed. Instead, we had lunch in town around the once famous Nye Beach resort area. Lot of neat shops and galleries to look through.

The BLM handles Yaquina Lighthouse site with an excellent interpretive center. Maintaining an old quarry on the grounds for tide pool viewing for people with disabilities is another unique feature of this particular park, which surrounds the working lighthouse. Of course, the lighthouse is only valuable to fishing boats and pleasure craft and people like us who love to dip back in time. If you find yourself near Newport, don’t miss it.