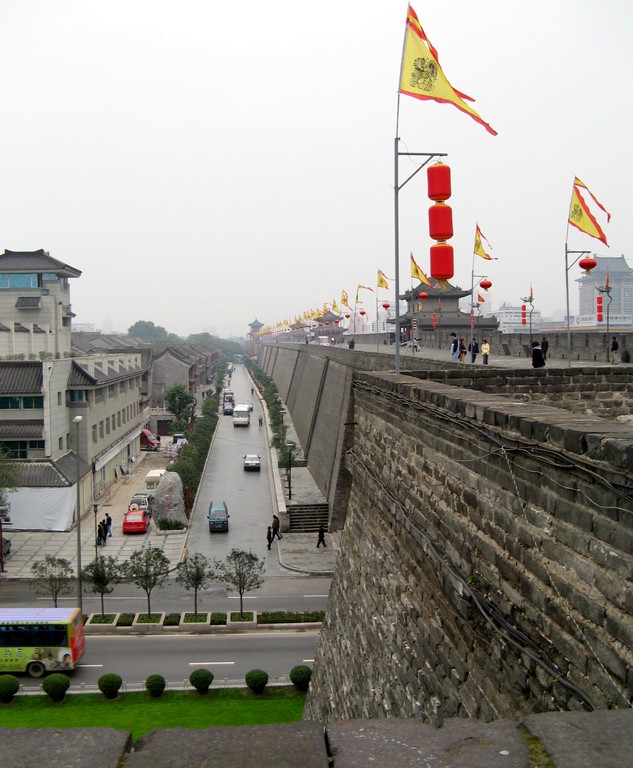 Before leaving Xian for our flight to our next destination at Chonquin, we walked up the 100 steps to the top of this old city wall. This preserved section of the wall has wonderful views of the modern city in a very affluent section of Xian. 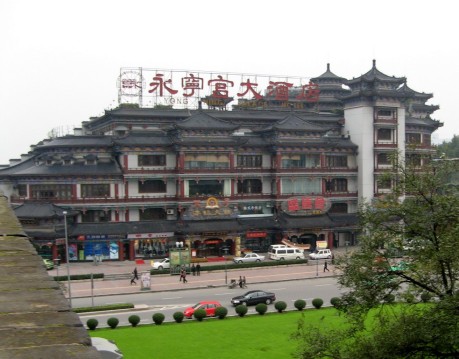 This view of  the street below is curious for how little traffic you see.  Budding new capitalists in China now want to own their own car, but they have yet to find out about  real traffic jambs. 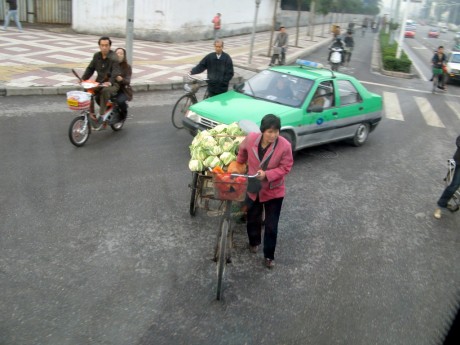 It is a city in transition, with bikes and rickshaws mingling with autos. 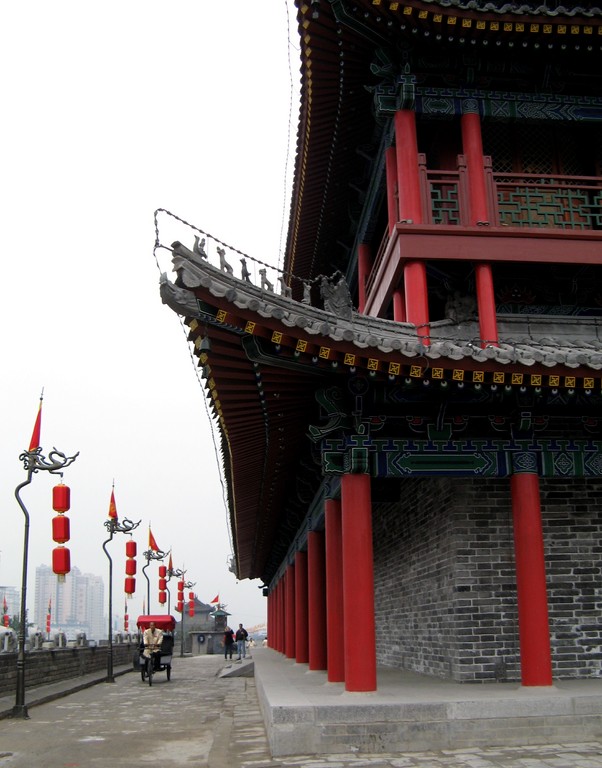 On top of the wall, are  businesses, not yet open as we arrive early in the morning. We walk  and take in the view. 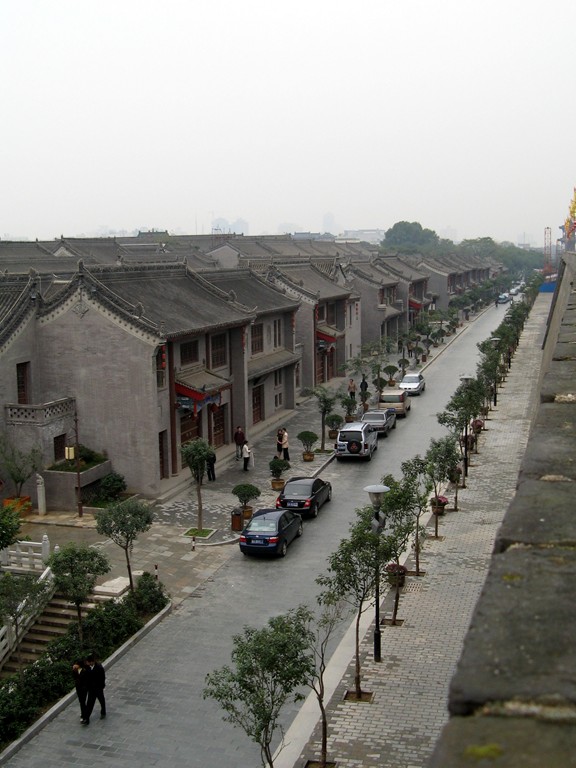 These very modern apartments have few cars parked outside. 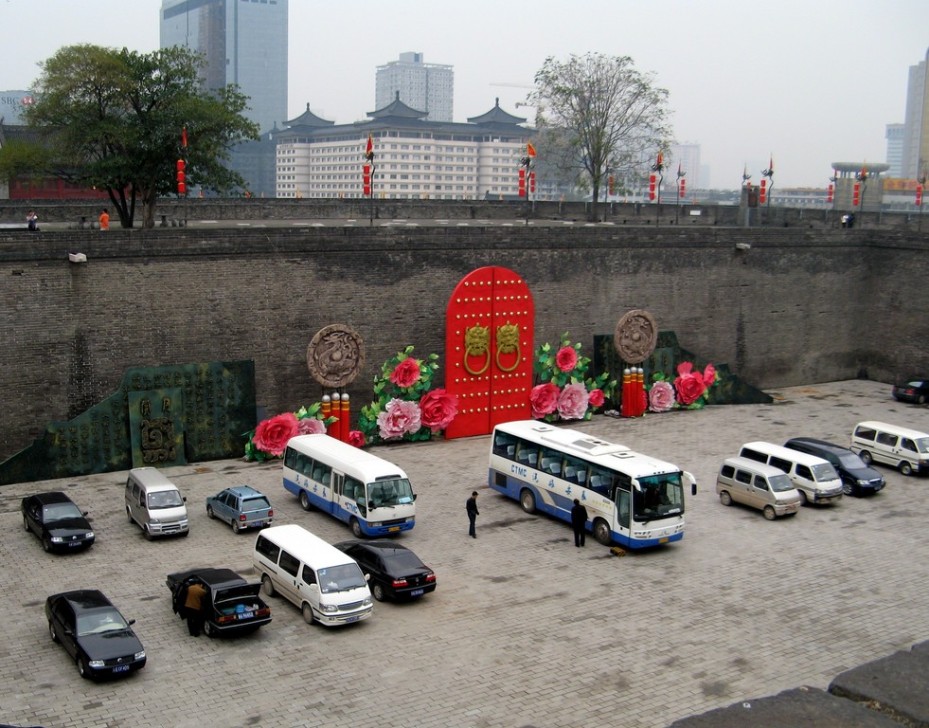 An old walled enclosure now serves as a parking lot. In America it would be jammed full. 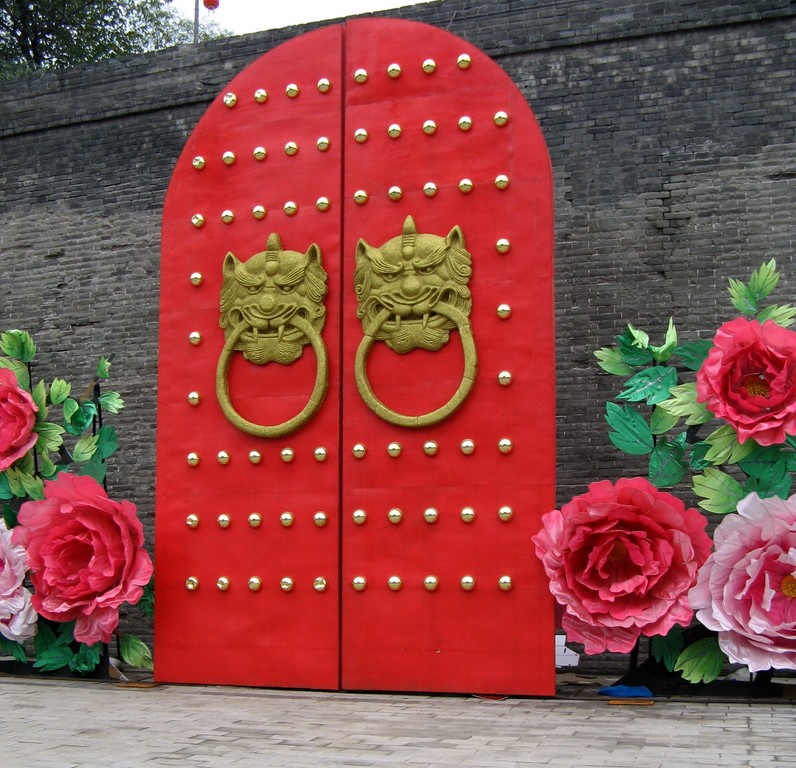 If you build a gate, why not make it beautiful?  We spend an hour on the wall before moving on to the Little Wildgoose Pagoda which is an old Tang Dynasty Temple with a huge city bell. 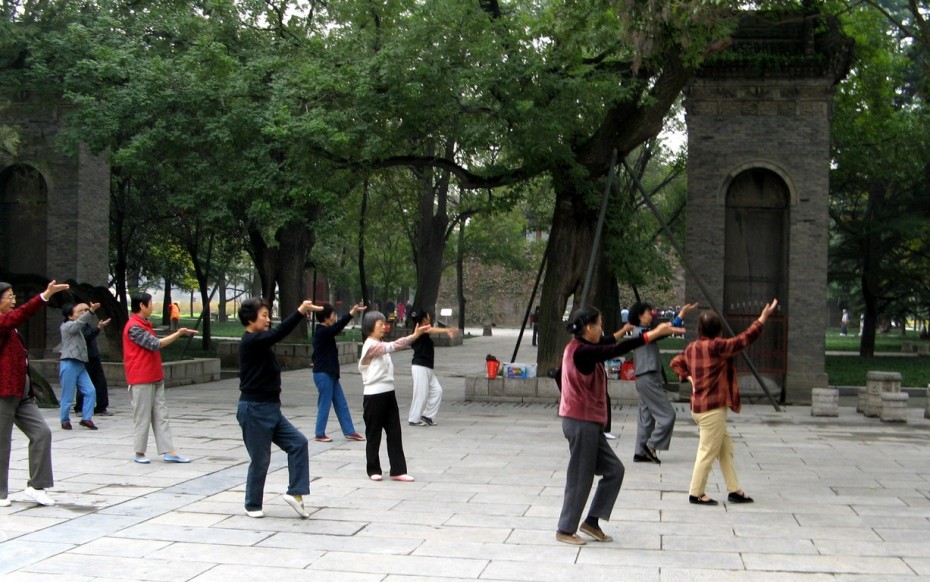 The grounds here resemble the Temple Of Heaven. It is the gathering place for exercise that all Chinese do each morning. 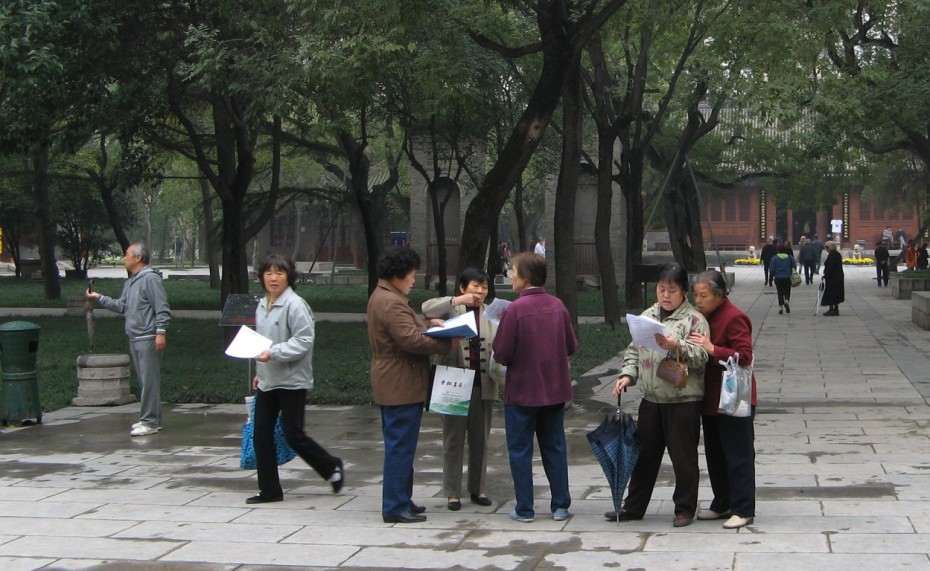 Chinese people do not have meetings in their small homes. They have a meeting and take care of business at the Temple or Park. 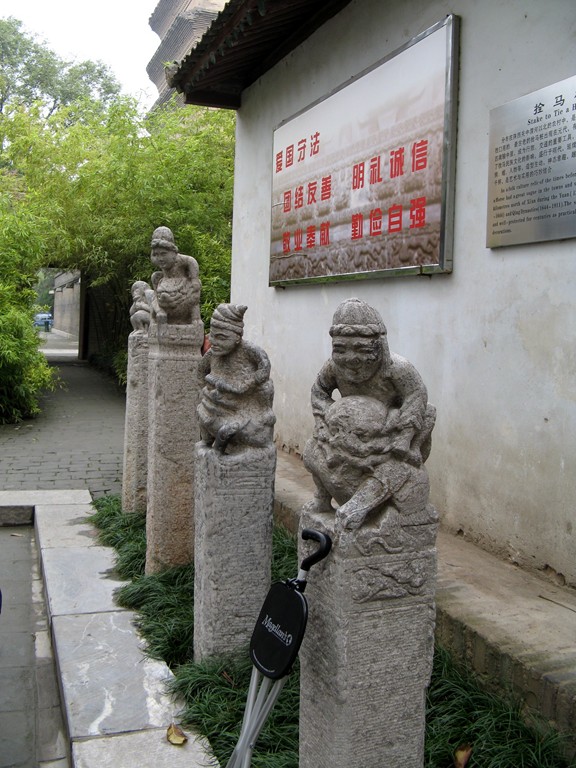 These stone posts are left over from the old days when people tied up their horse or donkey to visit the temple. 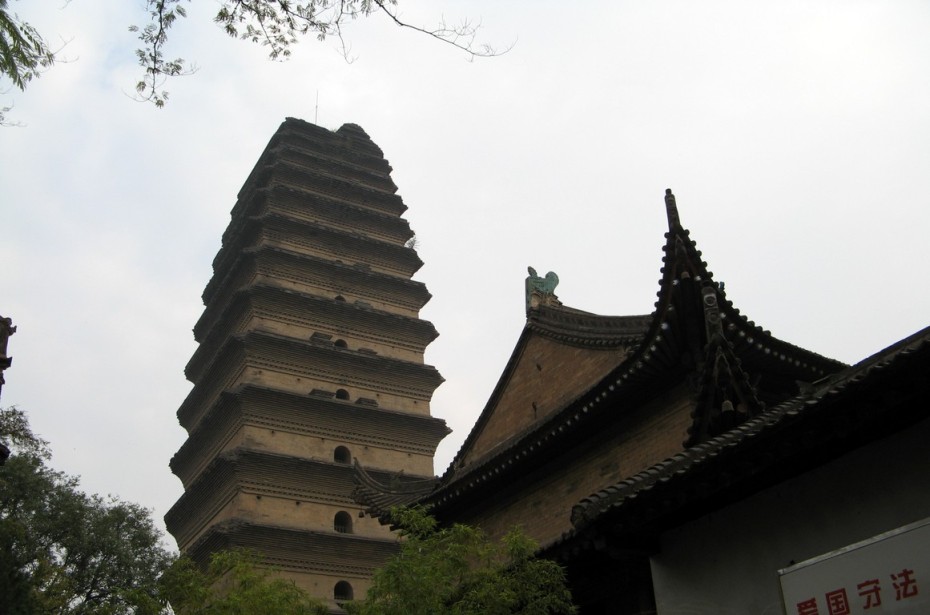 The Little Wildgoose Pagoda is named for the wild goose because a starving monk, (monks cannot ask anyone for food,) was hoping to find some meat when a wild goose flew into the pagoda and couldn’t get out. It died, (they don’t kill), and he ate it and named it the Wildgoose Pagoda. Pagodas were used for the monks to study. Buddhism was brought to this particular Pagoda by a monk who walked the scrolls from India to China. 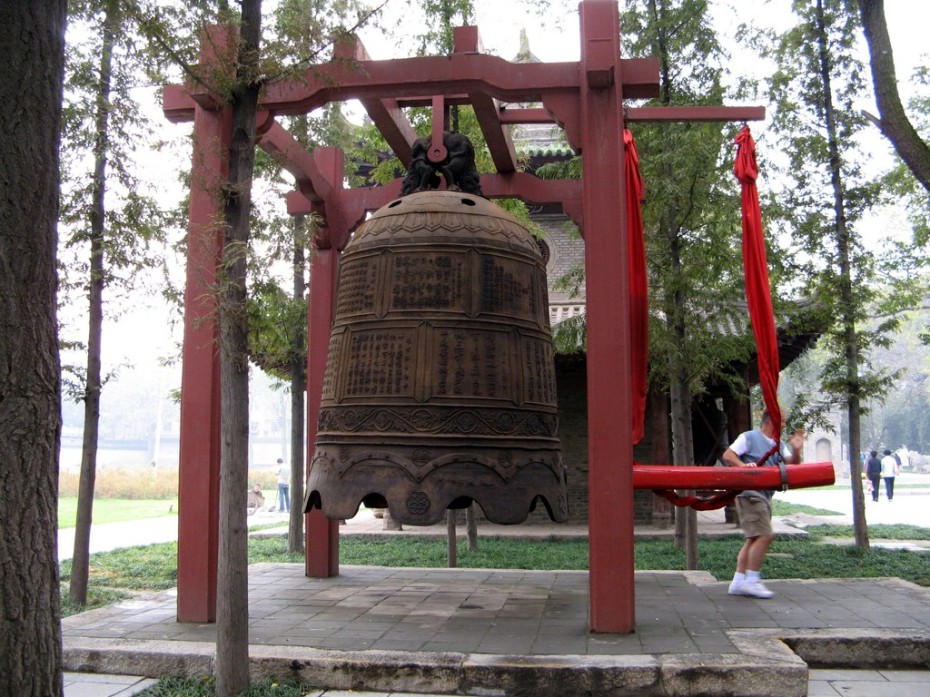 On the grounds is a famous bell. All of our big strong guys tried to ring it and could not. It takes about ten men to ring the bell as a way to warn the city that invaders were coming. It is hard to ring deliberately so naughty boys would not ring and run, it is speculated.  The Temple grounds had numerous craftsmen with shops, paintings, calligraphy, sculpture, glass, etc.  It is a lovely, serene place in the morning. 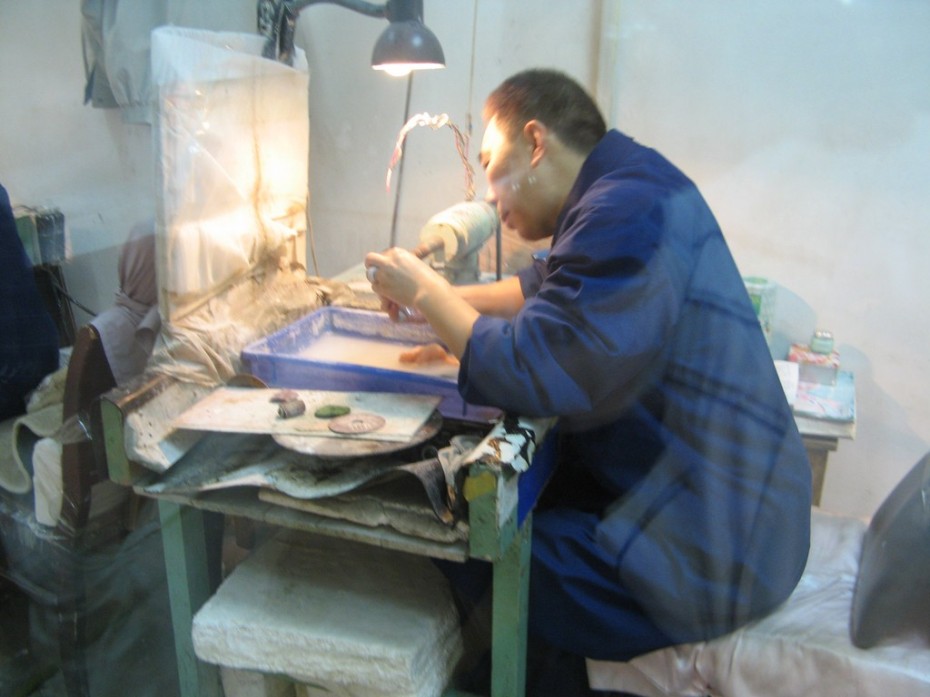 In the afternoon, we packed our suitcases and then visited a Jade Factory.  I couldn’t help but notice the poor working environment provided for their craftsmen. 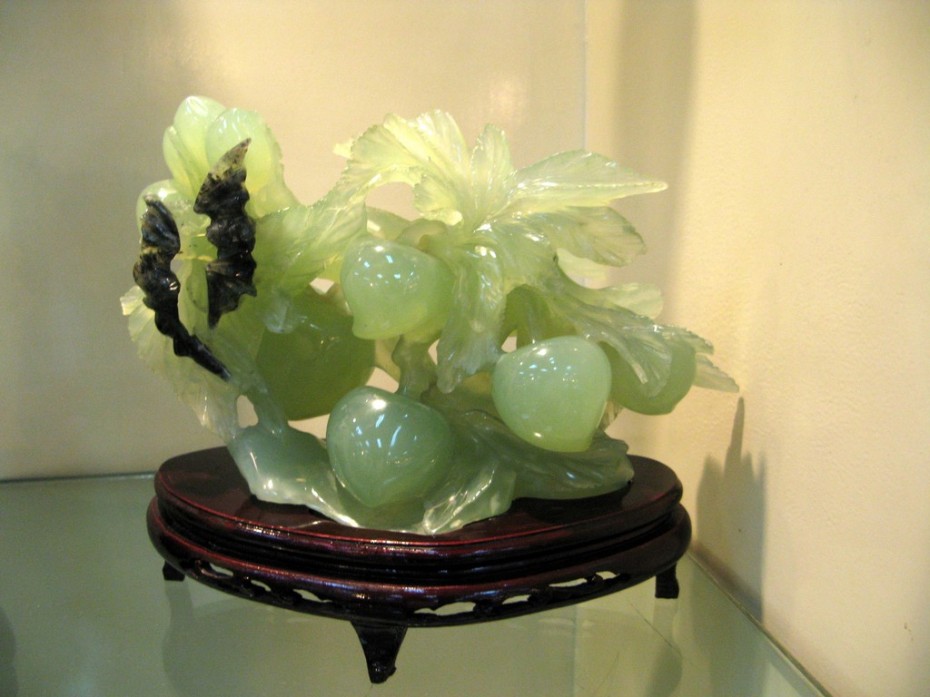 The work they turn precious, works of art. 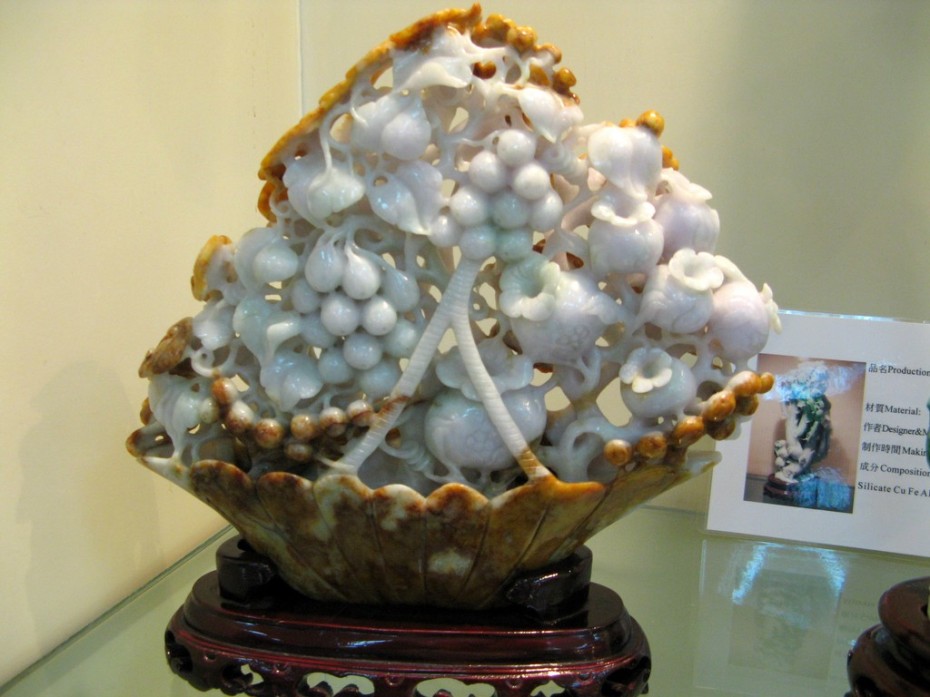 Factory visits on tours are designed to expose you to a quiet shopping environment of China’s best crafts.  We visited a pearl factory, rugs, and now jade. They are also expensive places to shop, and interesting. 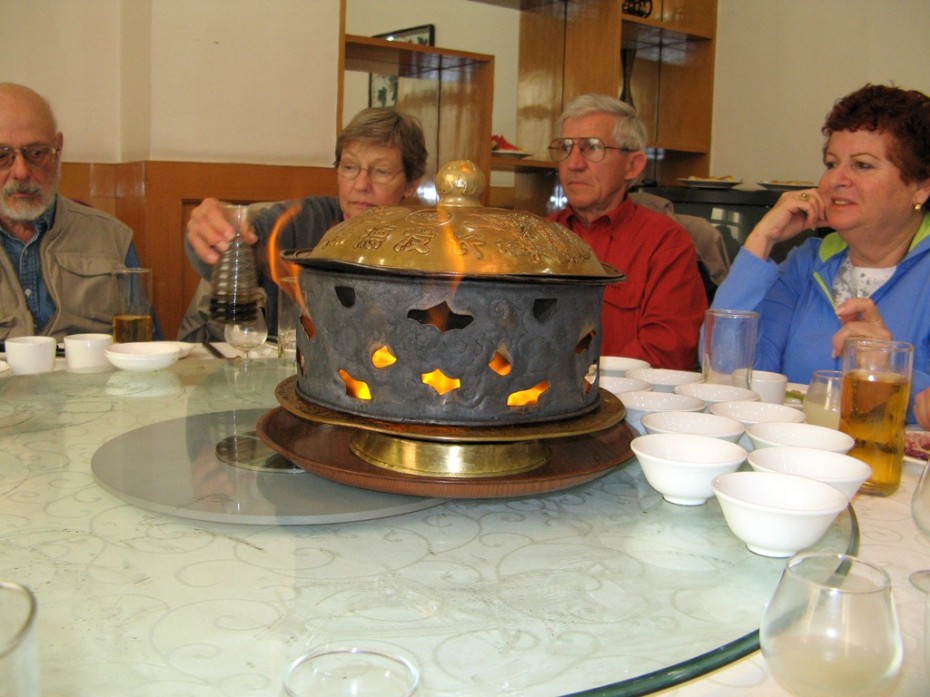 Our final dinner before our flight was a special 23 dumpling dinner, traditional food for the area. Normally the huge center turntable is filled with individual dishes. In this case, a waiter dished out the dumplings, helping after helping in the little glass bowls. It was superb.

China’s Terra Cotta Army is considered the eighth wonder of the world.  And, rightly so. Isn’t this an amazing culture? 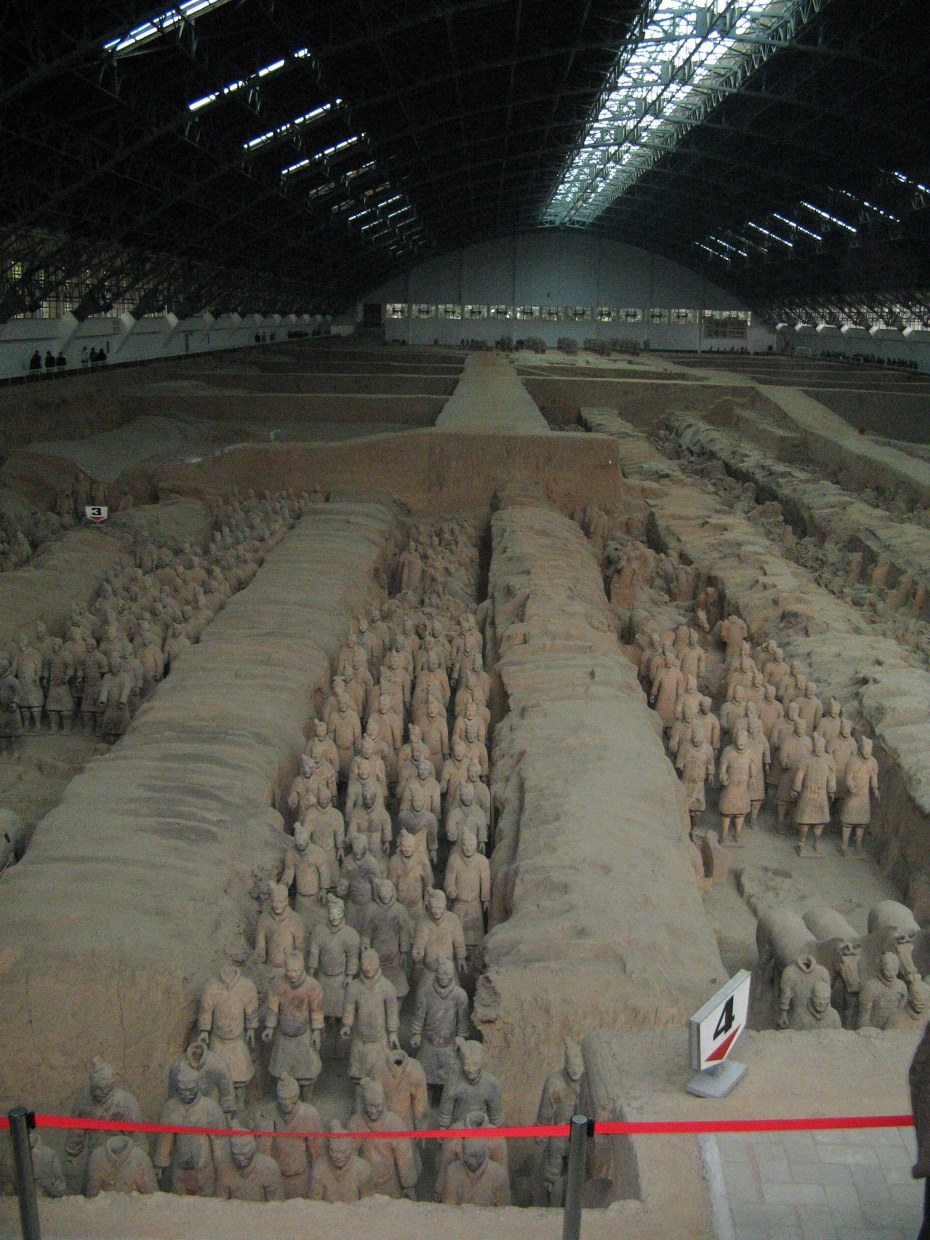 The Terra Cotta Soldiers face east and remain in the pit from which they came, standing at attention row by row. The building covering the pit is leaking slightly and is inadequate for preserving the soldiers, a problem the Chinese government has recognized and is addressing. 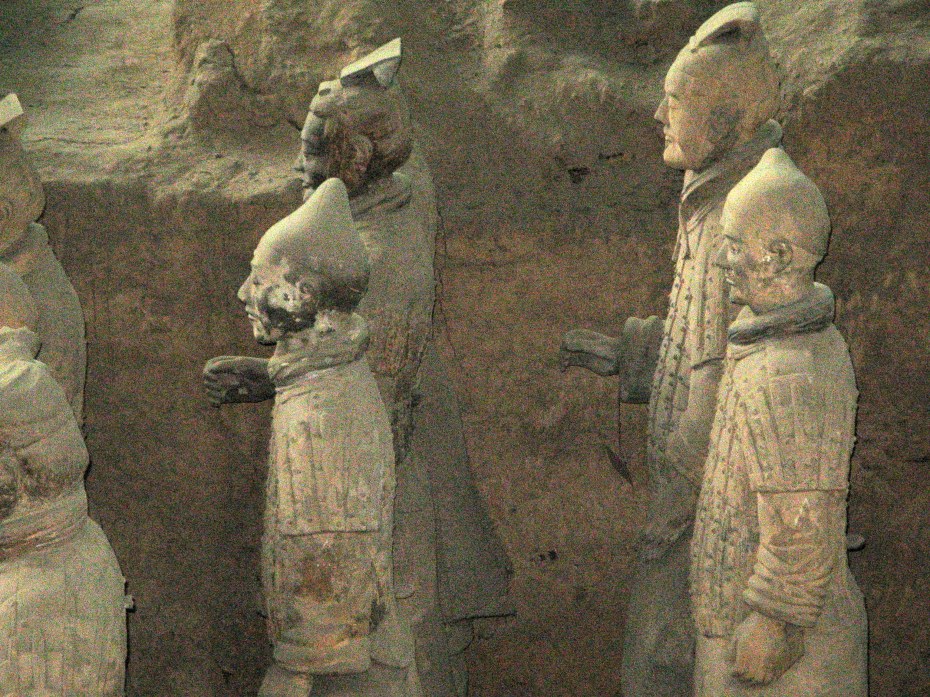 Point and shoot cameras cannot reach the fine details from such an immense area. Light is dim and only natural light is allowed into the building.  When found, the soldiers were  painted to look like they were alive.  The atmosphere has destroyed the color leaving them a dull reddish color.  Even so, we will have a good look at the soldiers. But first a bit of history. 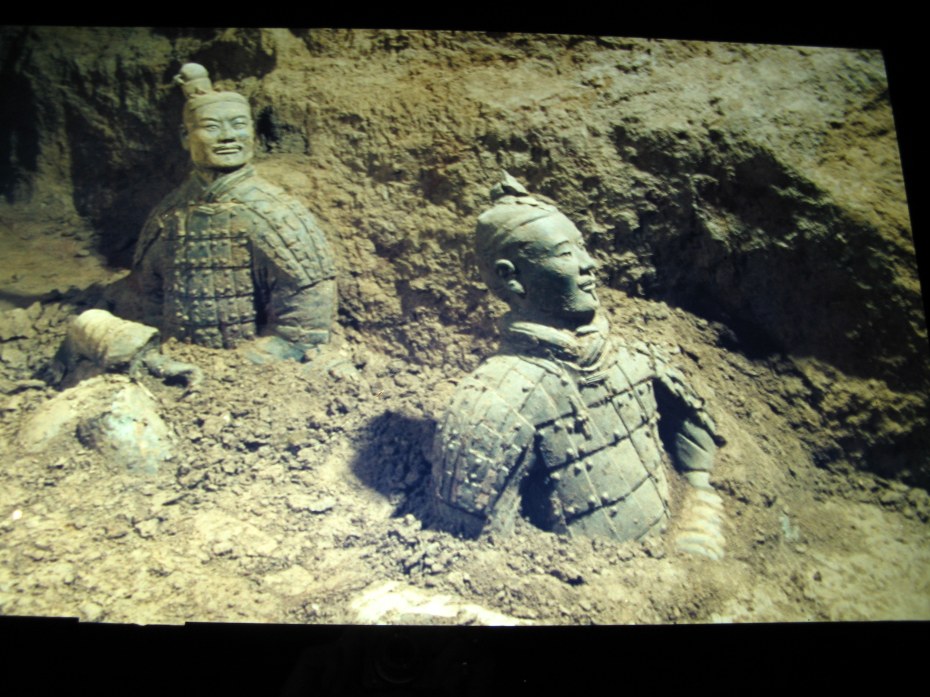 This picture of a picture shows what they looked like before they were fully removed from the ground. The armor looks like bronze or leather, but it is jade. Pit #1 is the largest with 6000 figures of infantry, the first discovery in 1974. Pit #2 holds 2000 Calvary and archers and horses. Each soldier’s face and body are an exact replica of a real human. No two are the same. Pit # 3 was a command center full of dignitaries or politicians. Pit #4  holds the middle army, bronze chariots ½ size, and horse-drawn equipment wagons. 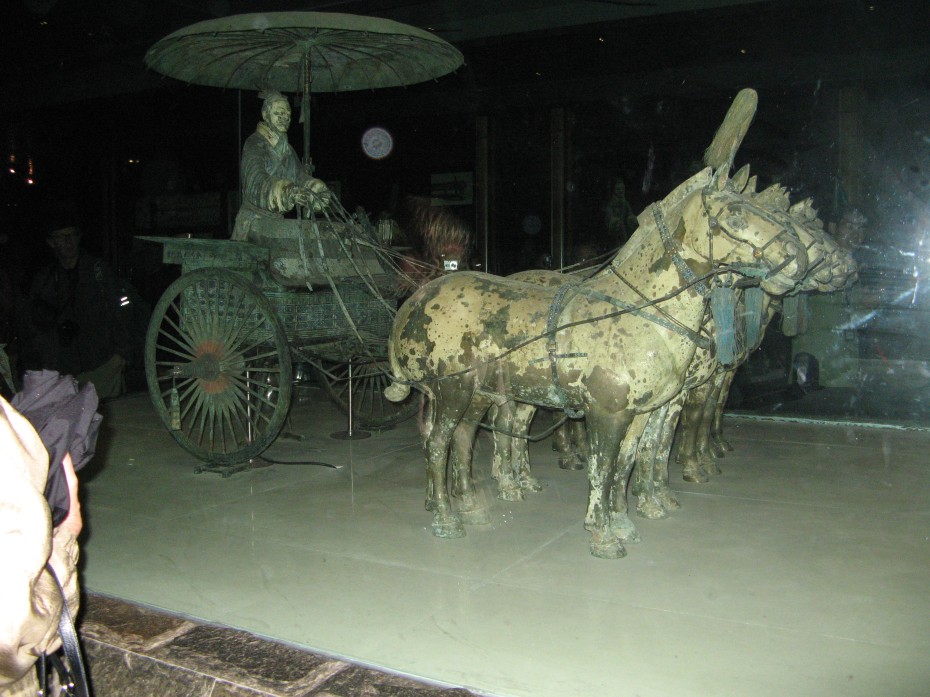 In the museum, this chariot is completely enclosed in a temperature controlled glass case. 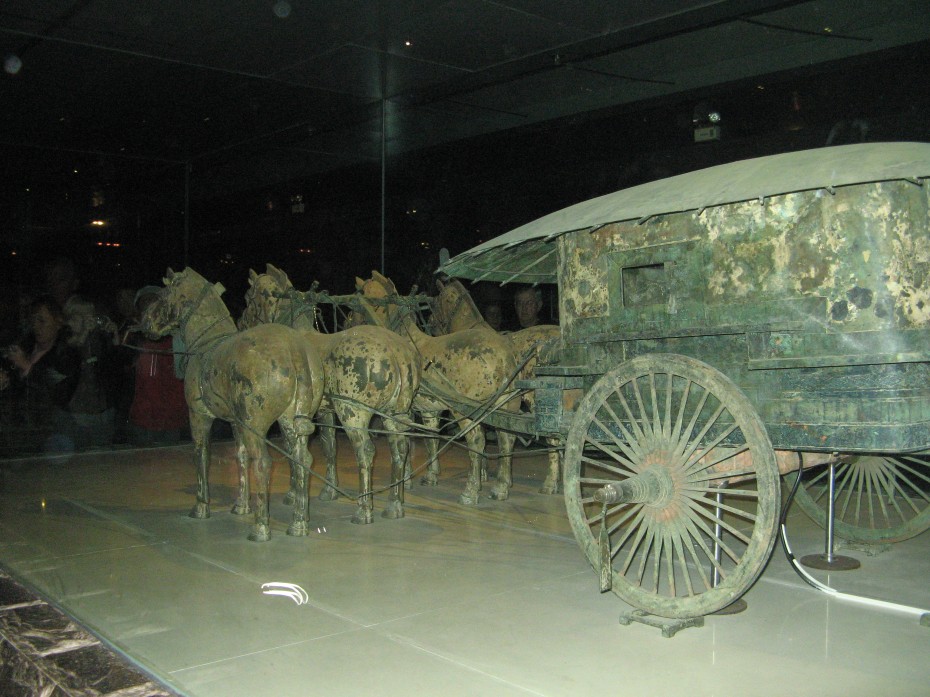 This equipment wagon and its work horses is on display in the museum as well.

I was surprised to learn that in 1991 they discovered two nearby tomb mounds,  the graves of a Ching Dynasty emperor and empress buried in separate tombs. They now know there are 73 of these tomb mounds in the area of the soldiers. A few of them have been opened, examined and buried back again. The rest will not be opened until they have the proper technology to care for these treasures. The technology to protect them still does not exist.  The financial costs are enormous but there is wisdom in waiting.

During the intervening years, much has been learned about the Xian area (pronounced shy-ann), the soldiers, and the history of the Ching (also spelled Quing) Dynasty. Xian is in Shanxi Province which is considered the Cradle of Chinese Civilization.
Xian was the first capitol of China during the Ching Dynasty, the first of the thirteen dynasties. The first emperor, Ching Shu Wandi ruled in year 221  before Christ. He unified China. His dynasty only lasted until  206 B.C. He was a tyrant. He burned 250 Confucius Scholars alive. There is a mausoleum to honor them.

The second was the Hun Dynasty.
It was a slave society, a feudal society. When the Hun Emperor was 13 years old, he started to build his tomb. It took 37 years. It was the largest tomb in the world. He died at age 50 in 210 B.C.  The Emperors threw their concubines into the tombs and buried them alive so they could not reveal the site of their burial.

The visit to Xian was as gratifying as the Great Wall.  The public views four pits, but the Imax movie explaining it all, and the well done museum make this an unforgettable visit. And now a funny story. 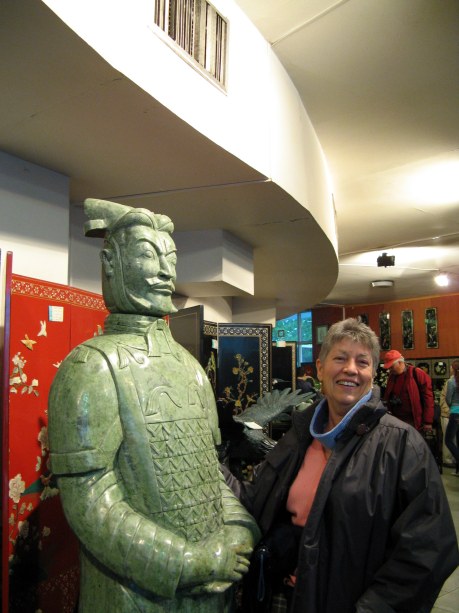 When it was known that President Clinton would visit Xian, the farmer was taught a bit of English to greet them. He learned enough English to say, “How are you?” He was coached that the Clintons will likely say,  fine, thank you, and he should answer, I’m fine too.  But, Clinton said,  “Hello!”  And the farmer said ‘Who are you instead of How are you?  Clinton answered  “I’m Hillary Clinton’s husband.”  And the farmer  said, “Me too.”

The Chinese feel warmly about the Clintons because they visited Xian first instead of Beijing or Shanghai. 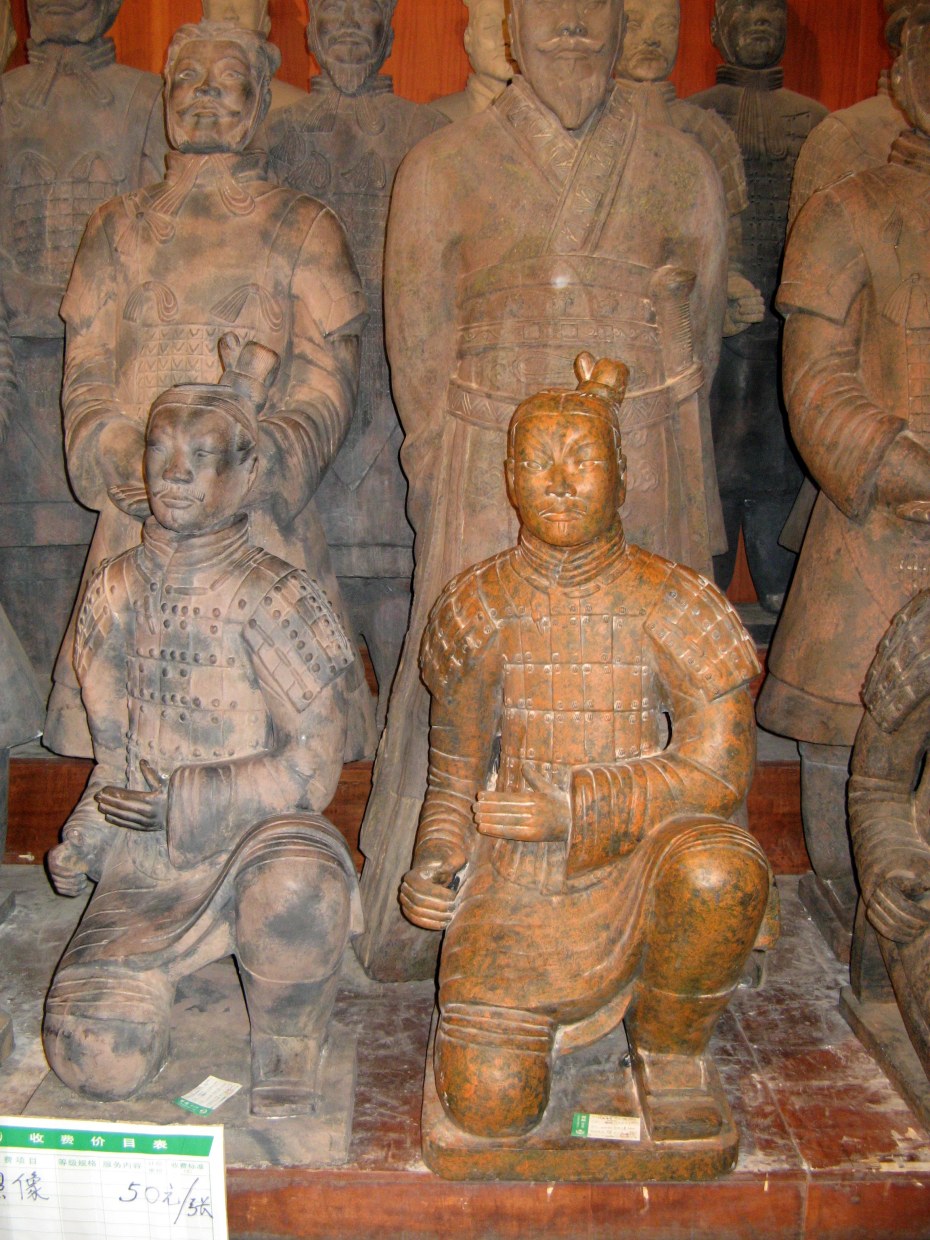 These replicas can be purchased and shipped home. These soldiers also come with a replica of the weapons they held in their hands if you want to buy them.