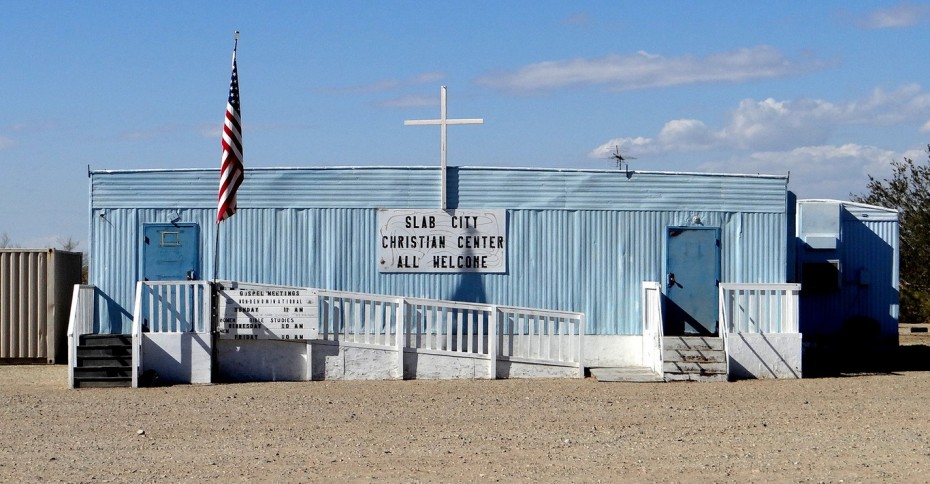 The “slabs” is called a city because it was one for about 5,000 people at one time. Now, it serves as home to about 200 people, and for them, it is their city. Amenities include a place of worship. 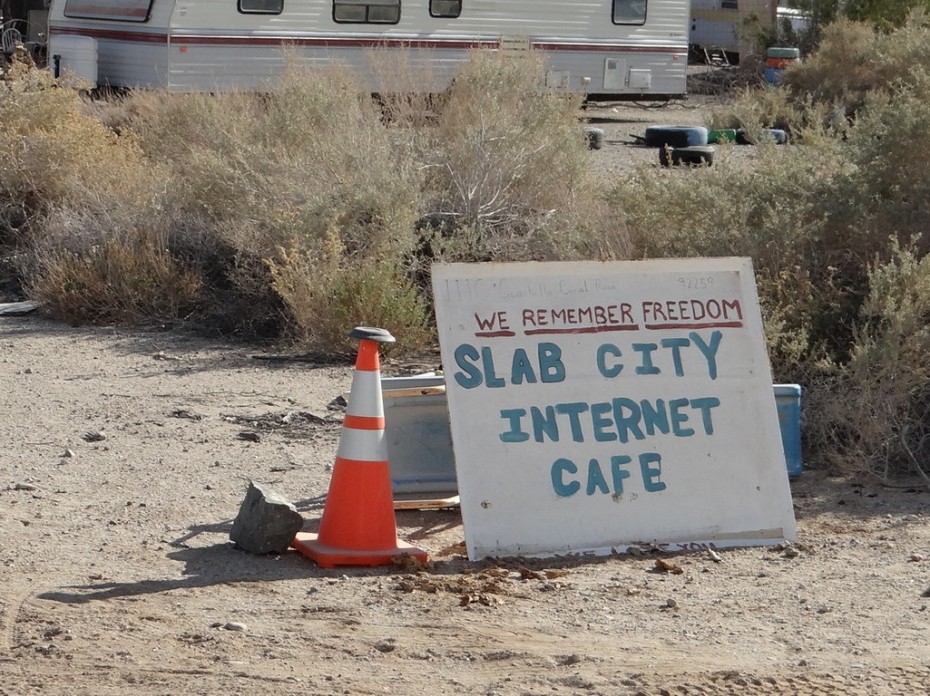 A few businesses. The Mechanic, Linda, the news editor, and solar Mike are old timers of 25 years or so.

Various clubs regularly meet and/or stop at the slabs. Loners On Wheels, Jim’s former club, the WINS, Travel’n Pals. Leo, who we came to see, left early. He told us most of his friends from the Oasis Club are gone. In his early eighties, the newcomers and he don’t have much in common. 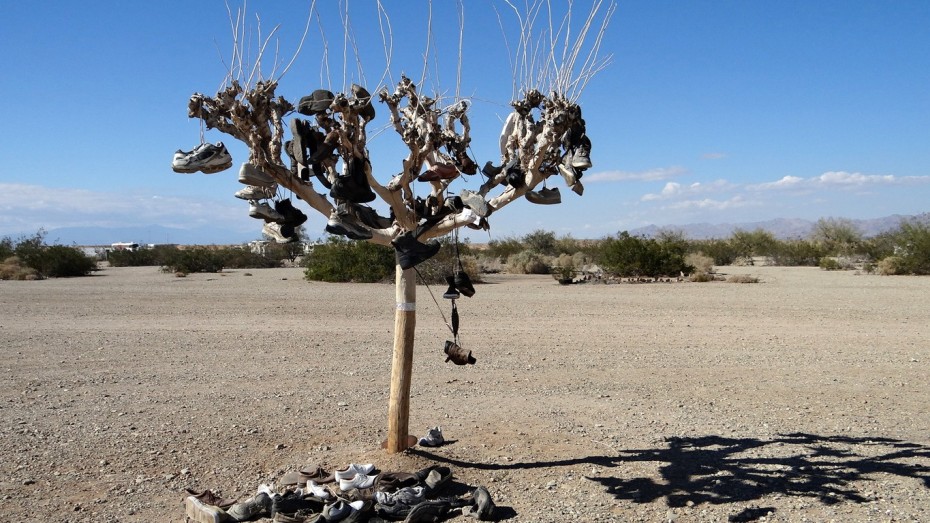 There is a free shoe shop and a pile of free clothing should you be in need. 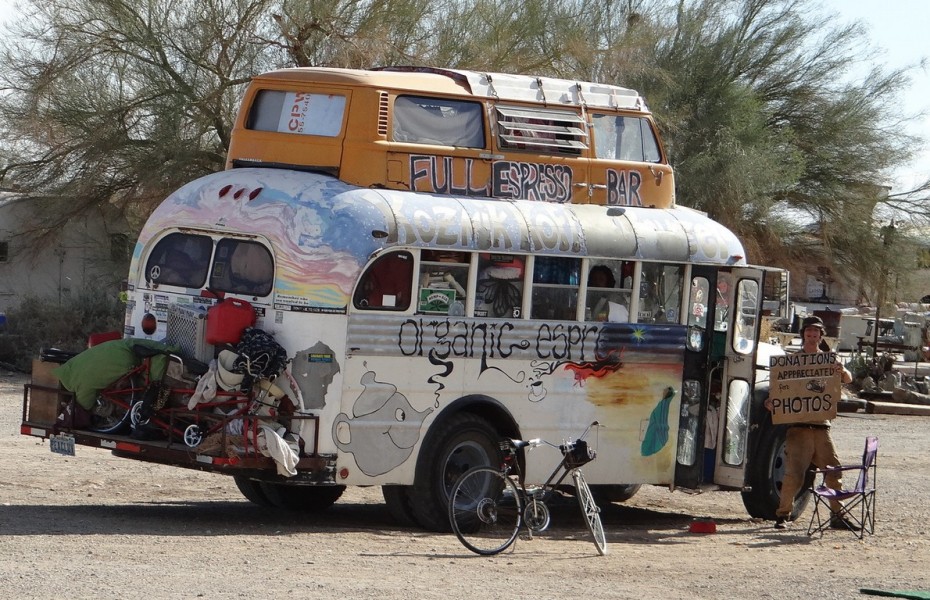 A coffee house, organic espresso near the library. 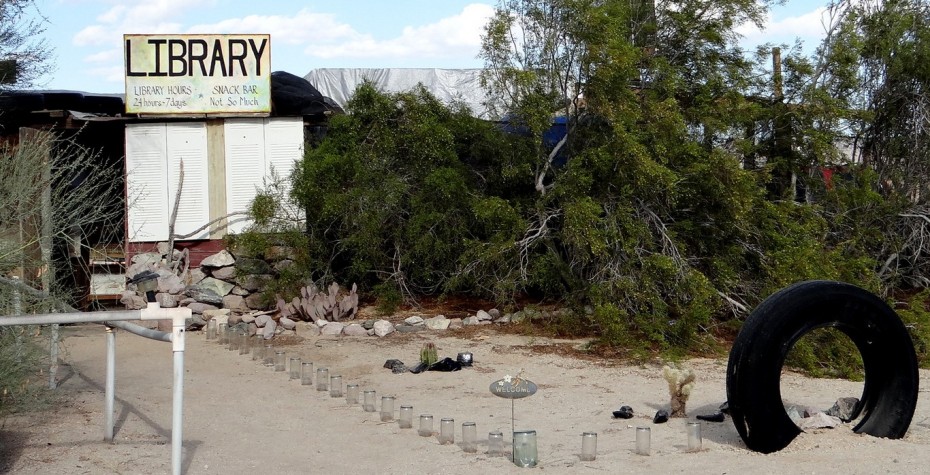 The library hasn’t changed much. 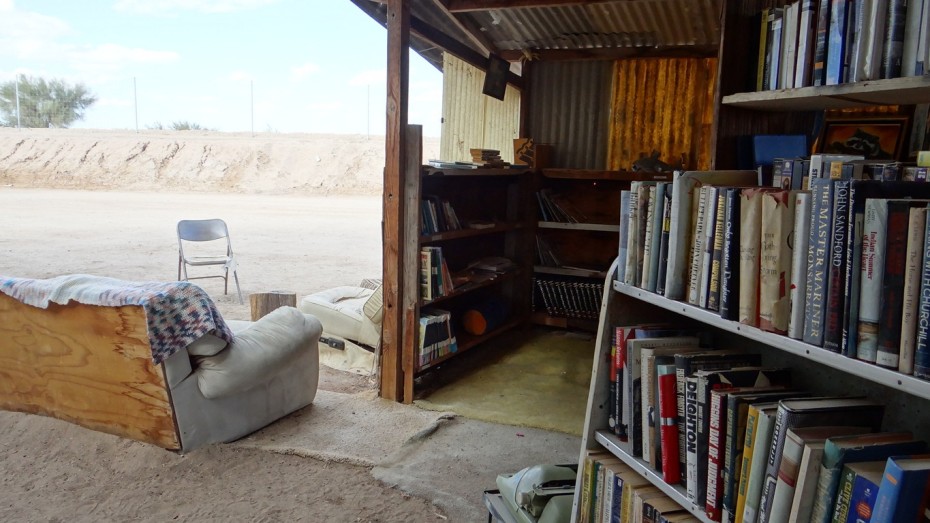 I donated a couple of books. They have a two-seater cafe inside, now. 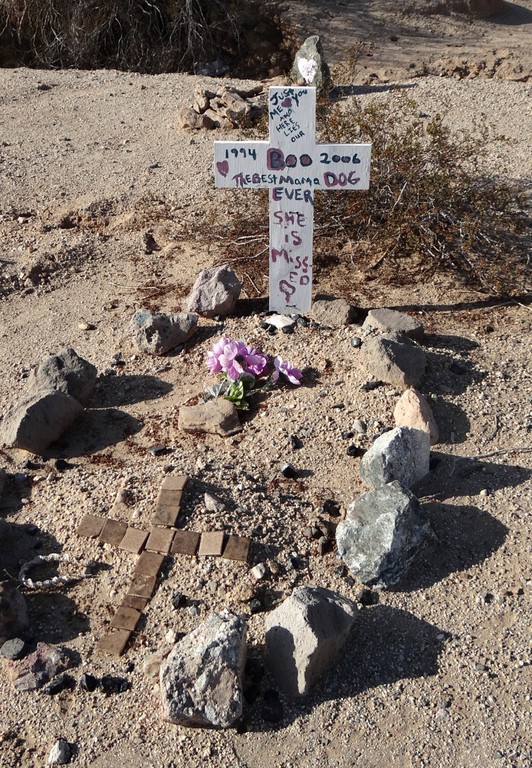 In the morning, after we learned that Leo was okay, we took a walk past the pet cemetery. 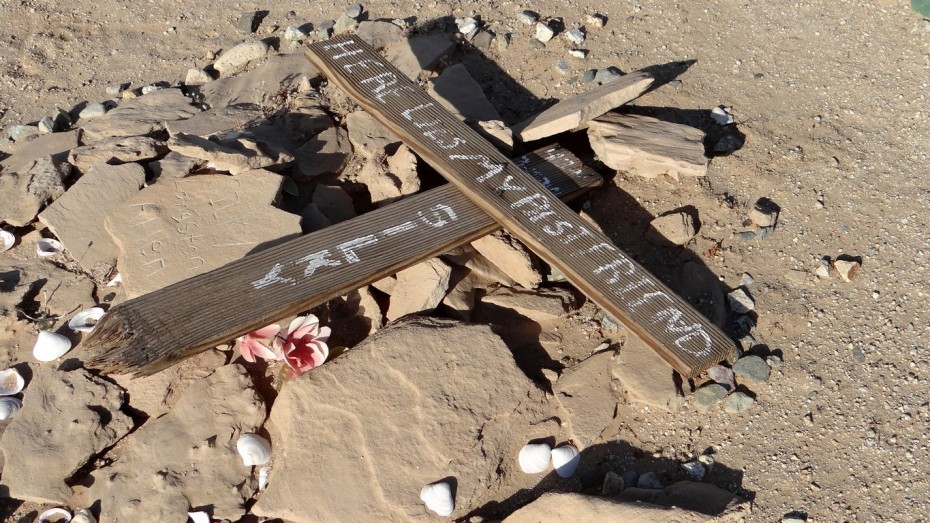 I didn’t count them, but there is probably 150 graves here. And a lot of love. 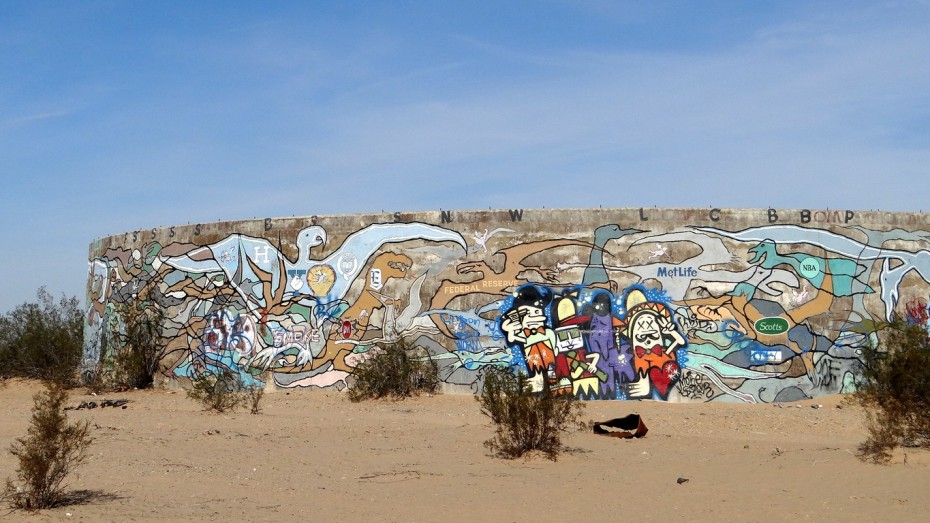 We took the same walk we would have taken with Leo and his dogs, had he been here, out by the pits. The first time I visited the slabs, these huge cement bunkers were plain concrete, now all graffittied, and people live inside of them. There are three huge ones like this one. 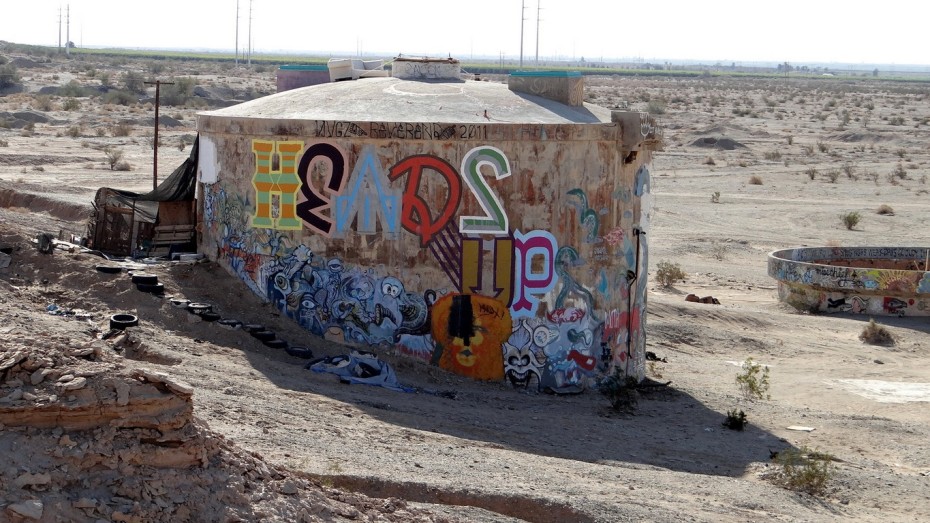 Whoever lives here roofed over and has an outdoor toilet and septic system and a garden on the right nearby. 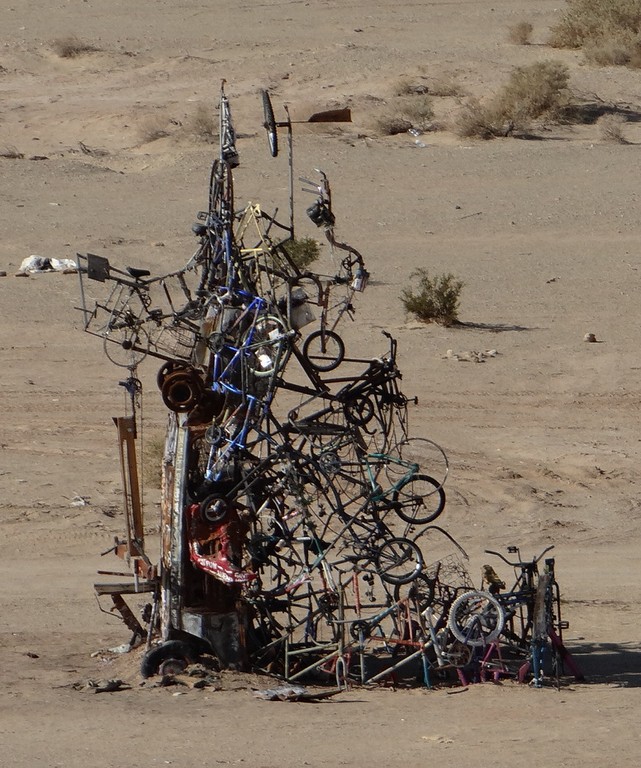 One thing Randy complained about and Jim, too, is that Slab City has failed to do something about trash. Gathering it and making trash art is not a complete solution. 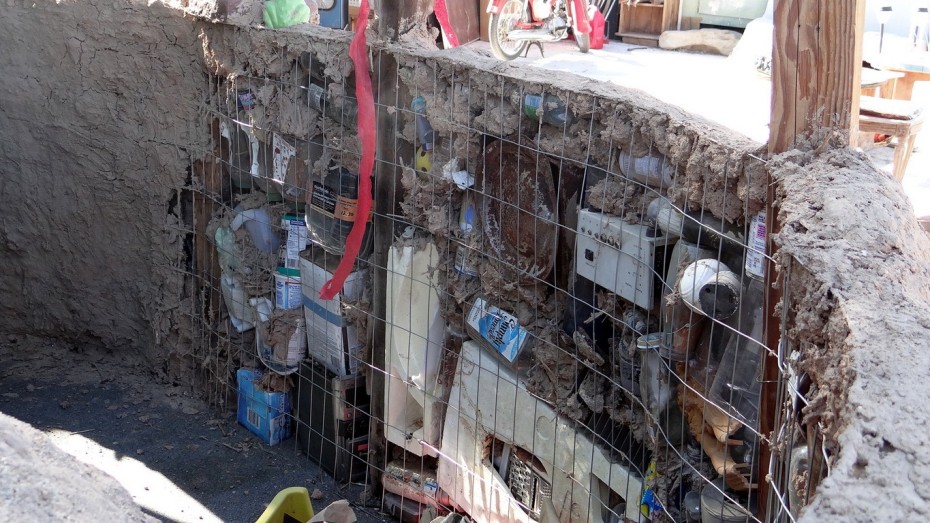 But Sandi Andrews has built it into her mud wall. She is allowing it to dry thoroughly. 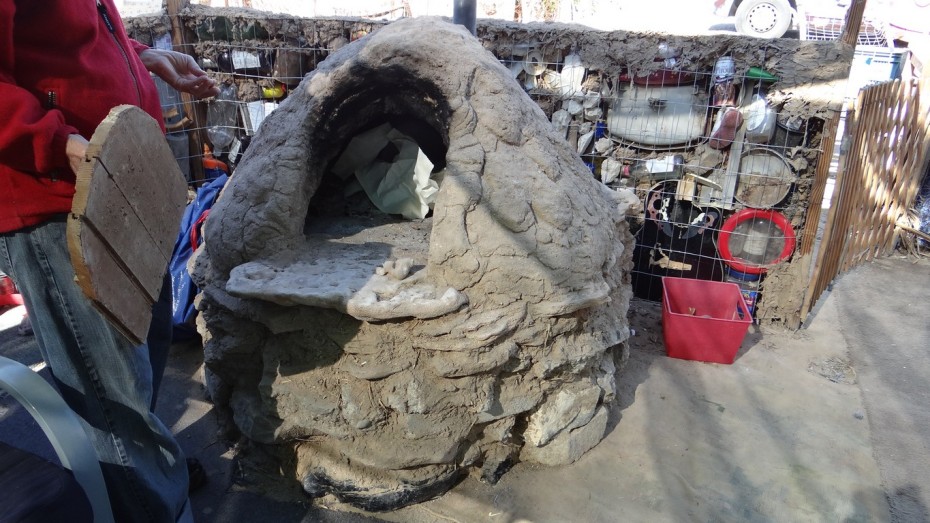 This is her mud oven where she cooks as much as she can without fuel. 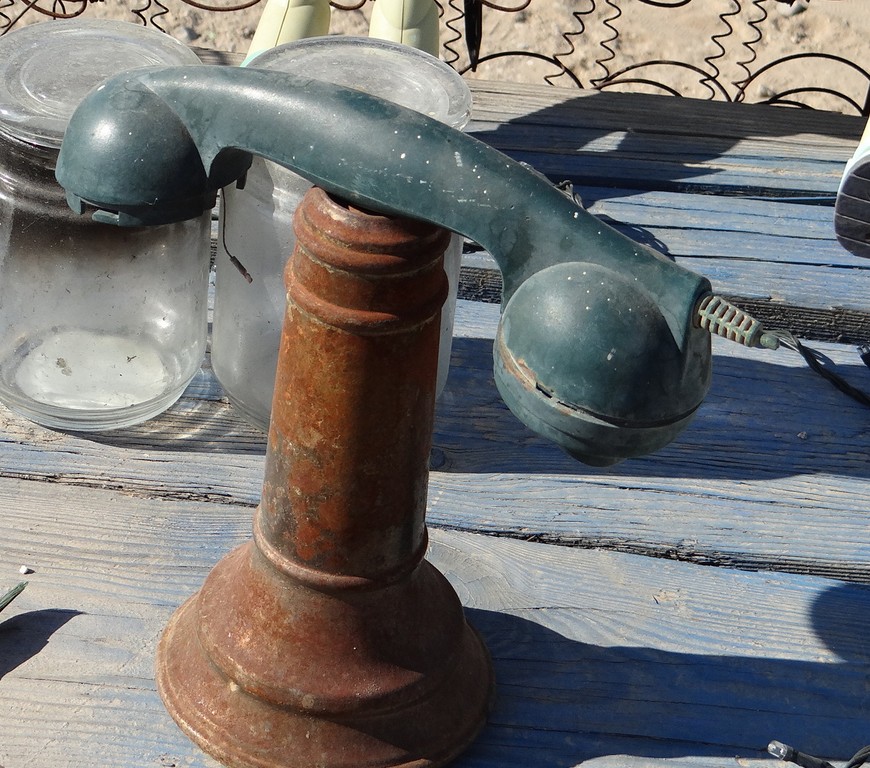 This is her God phone. It helps to have a sense of humor. 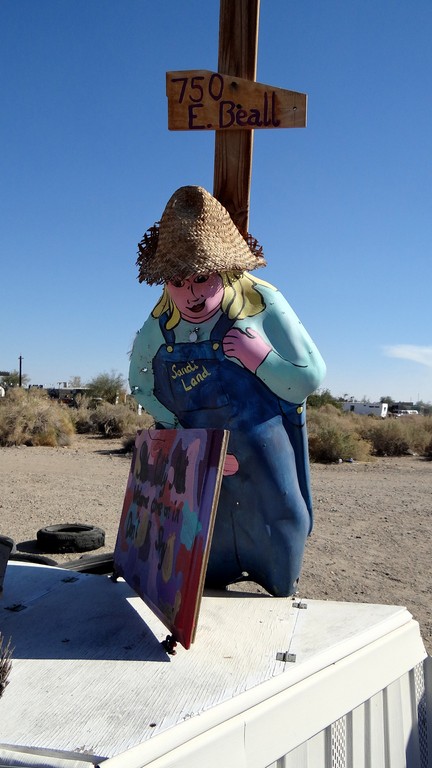 She makes her living off of her art work. She has two signs, this one is an effigy of herself.

Her paintings are soft and flowing. She showed me her technique and how she works. 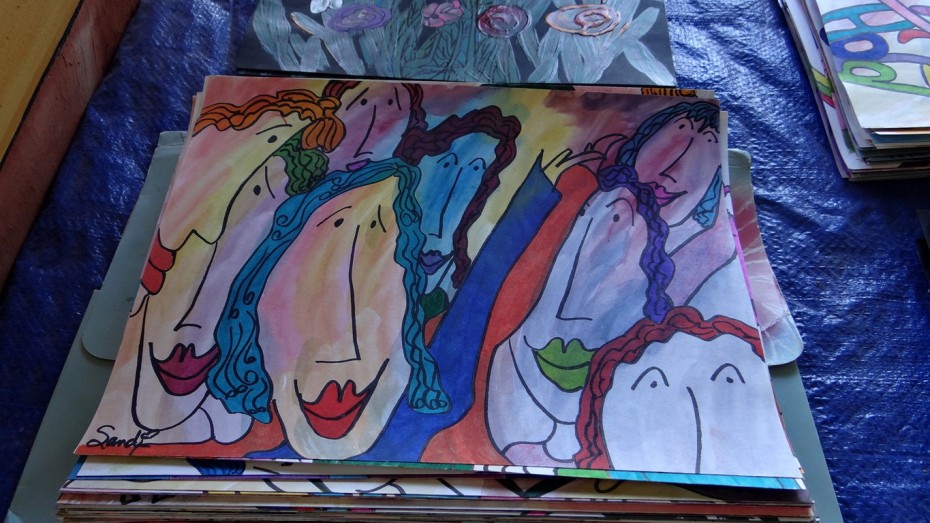 I liked her work and bought a painting. Her work can be described as happy. She worked as a gold miner for seven years before settling in at the slabs. She sells CD’s of her mandolin and guitar music. 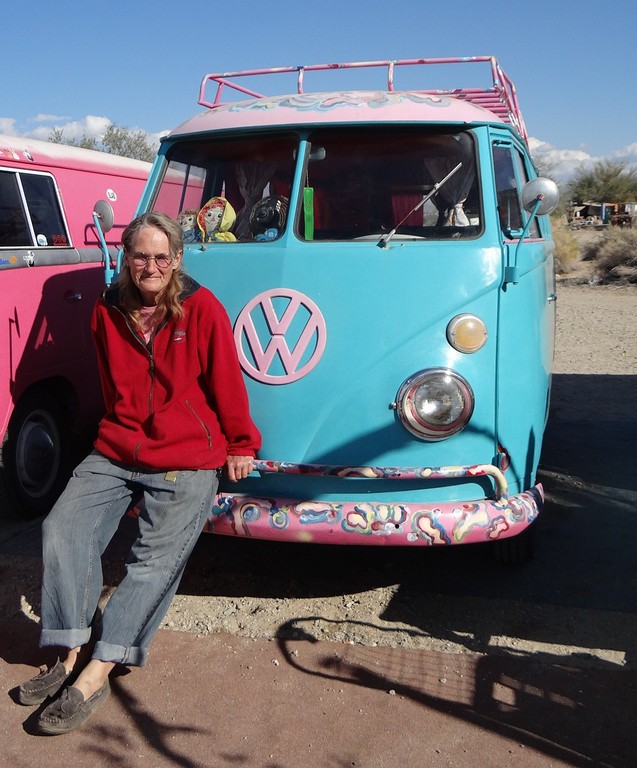 She has three painted vehicles out front. This is Sandi with “Hannah,” mostly driven by her son. She says, I don’t go much of anywhere. She invited us to share happy hour with her but when Leo wasn’t there, we left early. 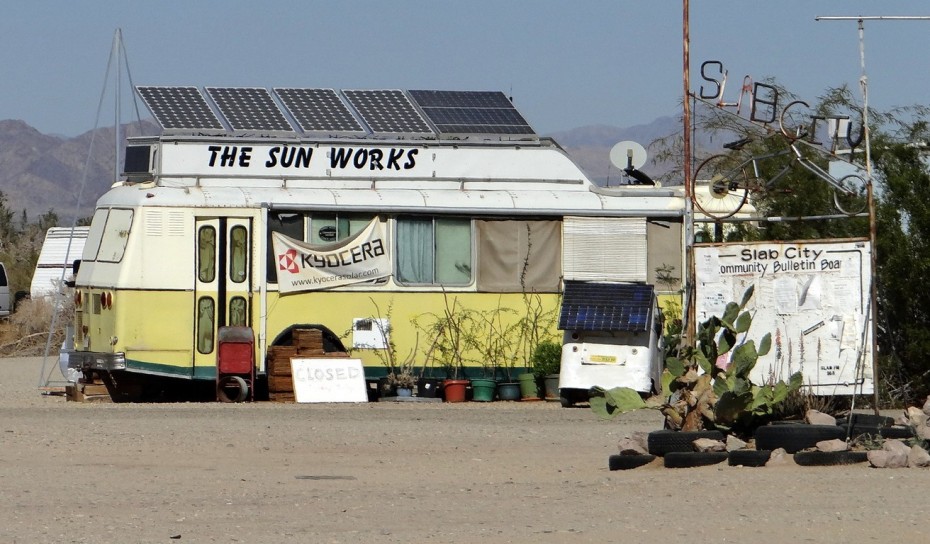 We stopped in at Solar Mike’s to have him check our battery set-up. 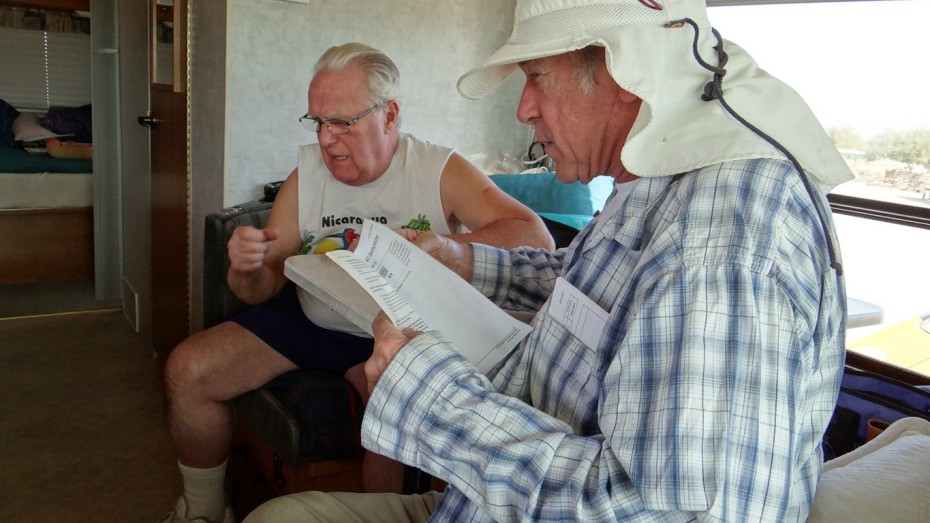 He adjusted it and we decided not to get another panel. Jim had boondocked for six weeks straight and he was worried about the low voltage. All’s well. Mike says about three people cause 99% of the trash, here. He calls them strippers. We pushed on and spent the night under a starry sky at The Overlook, near Borego Springs.

Why I No Longer Read Or Watch The News…

I last listened to or read the news back in 1998. I just got tired of all the negativism. I’m not sure why journalist find it necessary to look for the negative and ugly things in life…but most seem to do.

Here’s a great example I stumbled upon a couple of days ago on the Slab City Yahoo Group. I arrived at Slab City yesterday. Before reading on see my Blog post from yesterday at http://wp.me/pDCku-2XZ 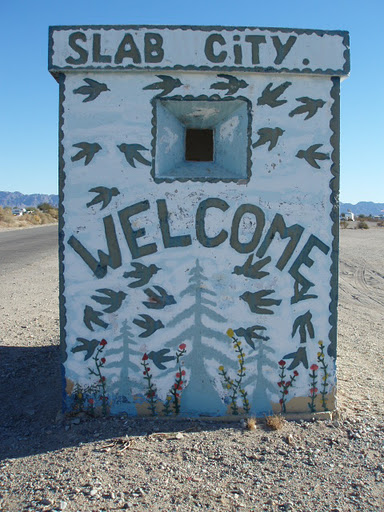 Slab City is a deserted military base from World War II. It’s one square mile on the desert floor, three miles east of the small town of Niland on the southeastern shore of the Salton Sea. All the structures had been removed and only the concrete slabs remain…hence the name. RVers discovered this place back in the late 1960’s.

When I first came here in January of 1996 there were about 5,000 RV’s within the one square mile. Because of difficult economic times in recent years…the numbers have fallen off. Last year there were perhaps only about 500 RV’s.

My complaint is that the correspondent found it necessary to emphasize the trash and danger, rather than the good things to be found at Slab City.

This CBS video totally misrepresents Slab city. The truth is that it is like a small city. Three miles away in downtown Niland, RVers have access to water and a dump station.  Some folks live there year-round despite the 120 degrees in the Summer. Some RVers spend from October to March there. A water truck comes by with deliveries…a propane truck does likewise. You can get a newspaper delivered…heck…UPS even delivers there.

Many of the people who live at Slab City actually choose to live there and actually like it! I stopped here to visit friends on my way to Yuma, Arizona. I only was there for one day this time, but in the past I’ve spent weeks at a time here.

HOWEVER…I must confess that this year the Slabs seemed to have more trash than I’ve seen in recent years. In talking with my RVing friends there, they tell me a of true “homeless element” appears to be settling in at the Slabs and that some appear to be inconsiderate of others regarding trash disposal. What some regular RVing Slab folks do is…when going in to Niland for groceries, is put their trash in the trash cans outside of the grocery stores (there are two grocery stores in town). There is even a Slab City resident who will pickup your trash and haul it to the landfill a couple of miles away for $0.50 a bag. Perhaps the economic times will bring more of a “homeless element” and the Slabs will further change. That remains to be seen. I can even see how a CBS news crew…with their good paying jobs…can look down their noses upon the unfortunates. I still do not forgive them for accentuating the negatives instead of the positives that can be found at Slab City.

Thank you CBS News for reminding me of what I’m not missing by reading or watching the news any longer. It’s a good thing you do not have to rely on me for your livelihood. GET OF OUT THE GUTTER CBS NEWS…LITERALLY!

Regardless of how CBS News chose to present Slab City…I really like the place. As a matter of fact many folks do! If you have the chance to visit there…you should not pass it by. You’ll especially like Salvation Mountain. Click this link to see my report on this unique piece of Americana that I wrote on December 18, 2010…
http://wp.me/pDCku-106