THE GREAT WALL OF CHINA 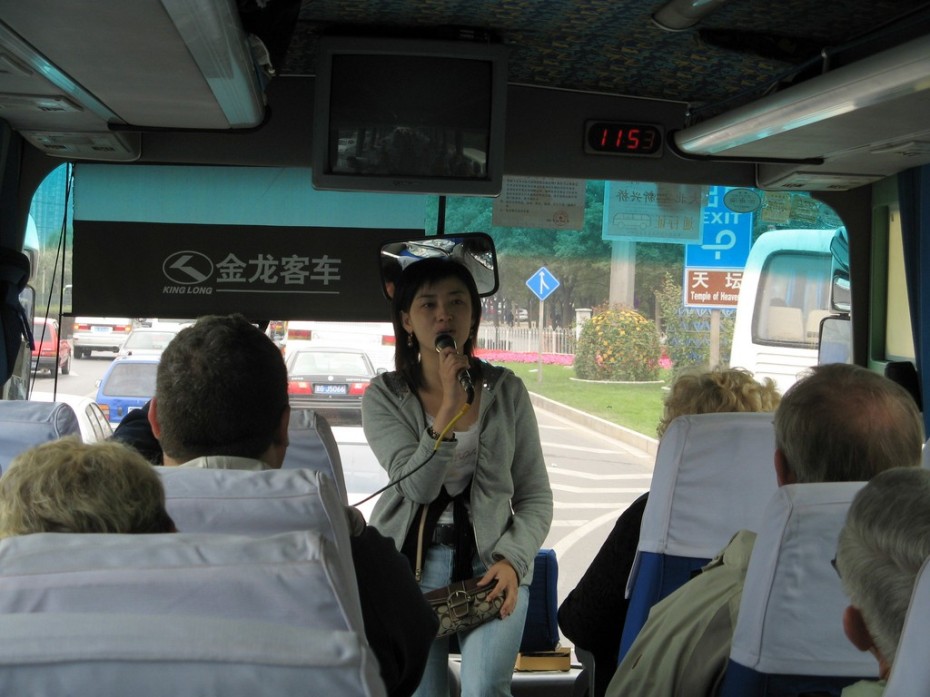 We take a bus to visit one of the seven wonders of the world, the Great Wall of China. I’m so excited, I can hardly believe I’m going to actually walk on the Great Wall of China. On the way, Vicki gives us a history while we look at the passing scene out the windows. We see the Beijing Romance Club, a matchmaking club, which seemed strange in 2006. Now, don’t we all know about on-line matchmaking?  We see farms, fruit orchards, vendors along the highway lay out their produce on blankets. Highway workers in droves sweep the edges of the roads with straw brooms. I mean straw brooms that look like “witches” brooms. China doesn’t buy machinery to do a task that can be accomplished by human labor, though, that is changing. But what then do you do with a huge population of workers without work asks Vicki?  People don’t drive as fast here and the highway is teeming with people on foot.

The walk up to one of the Great Wall’s entrance places is lined with vendors, since the Great Wall is the biggest tourist attraction in all of Asia.

I took a picture of this camel and was shushed away by the owner. Vicki explained that this man makes his living by charging for pictures taken of his camel, usually with mom and the kids standing near it. I felt bad for my “sin”, but I couldn’t read the sign nor undo the picture. Vicki explained that most of these vendors have been licensed to sell here because they were once farmers displaced by the flooding of the Yangtze River.

We enter near one of the towers built to house the soldiers and their families who lived  there and manned the towers all day and night.  I was stunned to learn that. It isn’t as though the Great wall could be driven to from a nearby city during the 1200’s. Somehow, I thought the wall was its own defense, a deterrent. Vicki took us to an entrance that is the farthest from Beijing city center, and not as busy as others. Notice the dip on the right to take rain water away from the steps.

This gives you an idea of the height of the walls at the top, just over five feet tall.  From magazine pictures and travel ads I’d seen, I  thought of the wall as this smooth brick roadway for miles. It is smooth here.  This section has been restored and looks quite new. 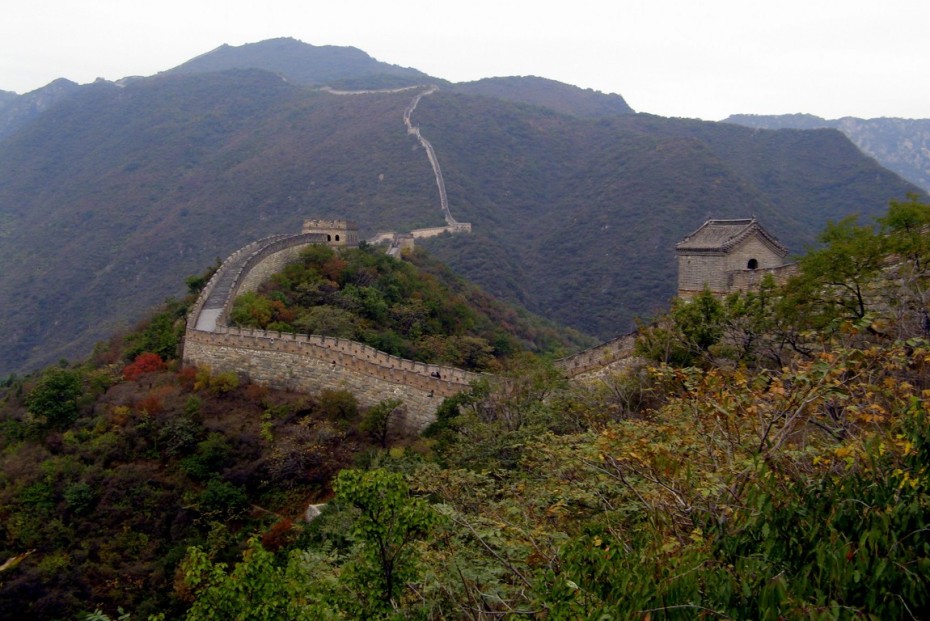 I guess I expected an even structure built in a ring at the Chinese borders, never giving much thought to the undulating terrain of the mountain passes it guarded. It is mind-boggling just trying to see in the distance as it traces the tops of the mountains in every direction you look. 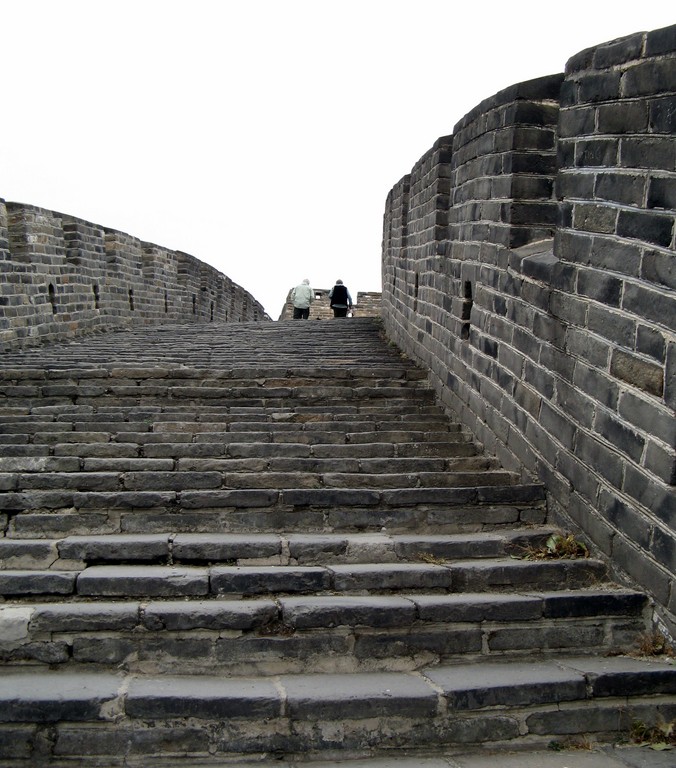 You can hike the wall for days, or weeks. We met a family that backpacked in for miles and found vistas, and wild animals, and broken, crumbling sections of the wall where they could climb down and explore the woods and meadows.

When you look over the edge, you realize that the wall is much taller than it looks on the “inside”.  Here Vicki pointed out the remnants of an old fruit orchard the soldiers and their families depended on when they guarded the border. They had to grow their own food and carry or pipe water to farm on the Chinese side of the wall.  On the opposite side, it was part of their job to cut away all vegetation within 30 feet of the enemy side of the wall. Ascending and descending the wall many times a day, to toilet, haul water, tend gardens, and other tasks,  tests the sense of believability. 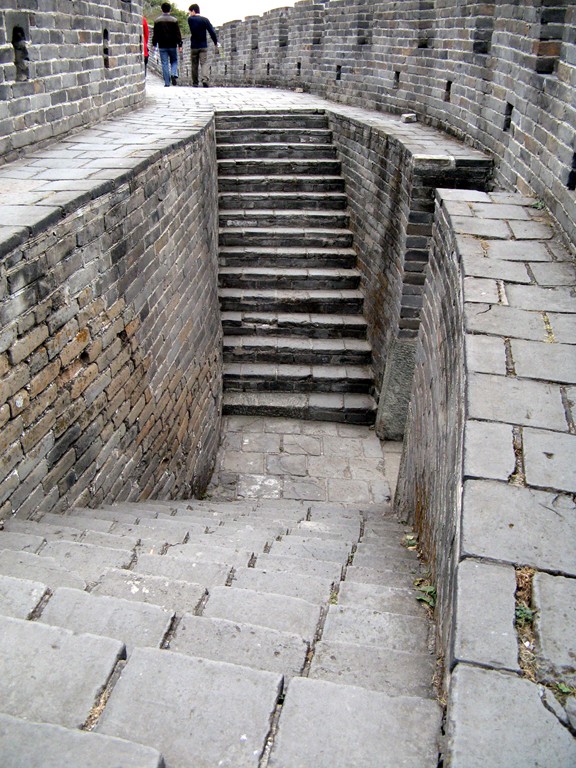 This is a spot where soldiers could get out to their work detail off the wall.

In inclement weather, you can imagine how treacherous it would be to patrol this wall. It drains one way and then another. Like castle walls, cut outs were built for the soldiers to fire their arrows at raiders below.  The towers and exits are located I’m guessing about every 300 to 400 feet, or so. Inside those towers, all open to the air above, the families kept warm by body heat and a charcoal brazier, also used for cooking. The feat of building the wall is hard to put your mind around. It at one time stretched 13,171 miles. And, while we were in China, news came that archeologists had uncovered another 400 kilometer section of earthen and stone wall from ancient times. The original wall was started in 200 B.C.   Each section has a distinct character, an individuality,  as one worker differed slightly in his method than another. Hauling and mixing the cement in a remote area, hauling the water, again, it tests the sense of believability. I expect they used horses and donkeys to help with the work. Even so, a monumental achievement.

You can see this section of the wall is  shorter, warmer and sunnier.

This was an emotional experience for me. I felt it was worth the whole trip’s expense just to see the wall. I cast one last look at this impossible place, straining my eyes through the mist to see, as far as I could, this amazing wall etched like a painting  on the mountain tops. I hated to leave.

The website below gives some history, facts and pictures of this one of seven of the greatest world wonders.