Posts Tagged With: The Nugget

I haven’t been to the Nugget Bar in my home town of Murphys  in many years. It’s a  typical cowboy bar with a local following.  Some years back, a bunch of us began calling it the Nu-Shzay Lounge in fun.  The French affectation didn’t change a thing. When we moved here in 1978, our closest neighbor would take his horse to town many mornings, and tie up at the Nugget to eat breakfast. But, if he went in the afternoon to get the mail, and stopped for a cold one, his wife would know about it before he got home. Hoagie was a Merchant Marine and lived home for three months and sailed for three months. His wife worked a typical 9 to 5.

I don’t remember when the owners had the horseshoes cemented at the entrance.  Horses were not welcome inside the bar, but old traditions die hard and at one time, after a parade or event, the local cowboys would ride their horses into the bar here and at the Murphys Hotel. Fed up with the tradition, the hotel owner had the cops waiting after a parade and arrested my neighbor, Joe Cardoza.  That brought the practice to a sudden end.

The old pool table is still active. That’s Kelly Wright trying his hand. The Nugget holds a pool tournament each year sometime in the summer. I’ve seen the place wax and wane, the clientele changes, but the spirit remains the same. A bit wild. And, I know a few stories and witnessed a few events I shouldn’t have, I expect. When Ballard was Sheriff, his nephew (out of season)  killed a buck and had it slung in the back of his pick-up. He went to the Nugget to quench his thirst and brag a little. When the guys went out to look?  The deer struggled to its feet,  jumped out of the pick-up, and ran away.

If you click on this photo you will see the bumper sticker on the right. A women And Her Truck, Is A Beautiful Thing. Though the owner of this truck isn’t the type to fisticuff in the bar, there was one woman who would go to fist city with the guys. She was Buggy Bill’s woman, Marian Sly, and I knew her well. She carried two knives, one in her boot and a big Bowie holstered around her waist. She had two rifles and  hand-gun in her pick-up along with her dogs and often her son who spent many nights in that old pick-up. She didn’t take guff from anyone. I’ve seen her haul back and cold-cock a guy over some loud mouthed comment he made.  Which reminds me why I went to the Nugget yesterday. It was Buggy Bill’s watering hole and people came to pay their respects at an informal celebration, as I did.

Tammy Huber knew him for fifteen years. She liked the fact that he never changed. He was always a bit stoic. He did what he liked. He was kind to children and particularly took a young boy in a wheel chair under his wing. He was crusty, but honest and good. I knew him for about thirty years and I don’t ever remember him smiling.

Everyone was having a good time and I was surprised to notice how many long-hairs there were along with cowboy types in the bar. Long-hairs were not welcome at the Nugget in the 1980’s.  My  (long-haired) brother, Norman, left Nevada, drove down Highway 4 and stopped at the Nugget just to use the bathroom. It was eleven p.m. and the bar was filled with the usual  tobacco chewing cowboys,  short haired and oiled. By the time Norman got out of the bathroom, they were laying for him. He escaped out a side door and got away losing only a small handful of hair.

Paul came over the hill from Mountain Ranch with a pot of beans, Bill’s favorite, mine too. All of his friends brought something to eat. Paul has a wonderful apple tree on his land and his niece used to make pies for the local restaurants from her home during apple season. The law doesn’t allow that to happen anymore.

And you can’t smoke in a bar anymore. I’m grateful for that law. On the right, you can see where people park their cigs on a  2 x 4 next to the door.

The Nugget has many windows. The doors were wide open. It was difficult to get good pictures. I arrived late, many people had come and gone. I didn’t know very many people.

I’ve seen this lady around town for many years, and couldn’t remember her name. 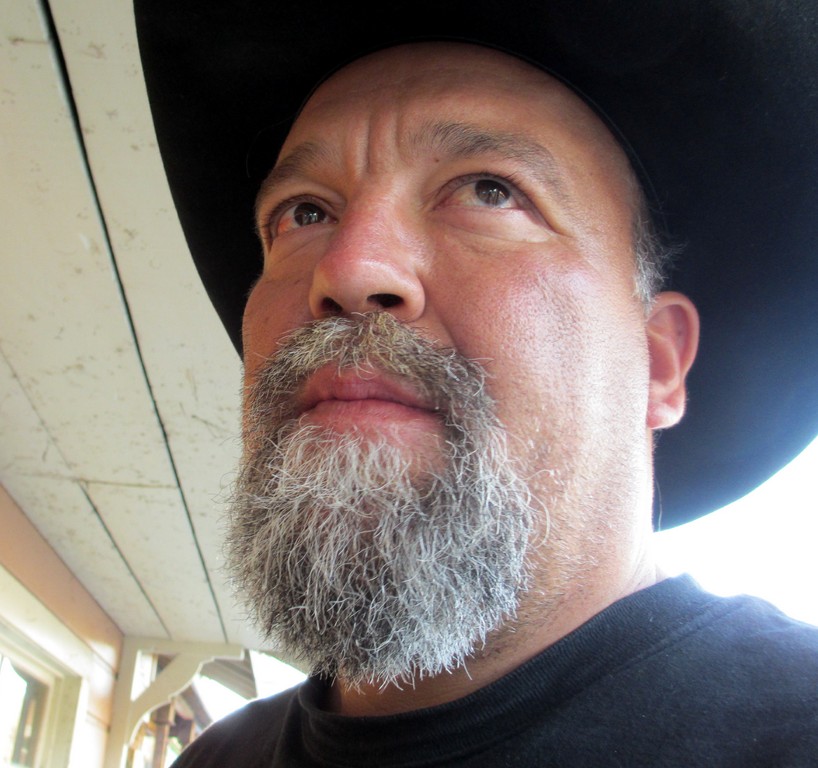 This cowboy was playfully policing the doors and not letting anyone outside with a glass, or bottle. A gentle giant who reminded me of another Nugget customer from the infamous fighting Bardsley family. The father, and his sons were ever whooping it up at various bars around the county.  Renowned for their strength and viciousness, no one messed with them deliberately.

My husband once convinced the Nugget owner to open up his then closed kitchen to our square dance group to sit around long tables and enjoy a few drinks on Saturday nights after the dances. George Bardsley  tried to pick a fight with my husband because he called the female bartender, “Honey!”  We didn’t know George’s girlfriend was the bartender, nor did we know about the family reputation, then. My husband ignored him and went back to the restaurant part and sat down with our group of about ten couples.  George went on to  be arrested for murder in another state not long after that. We had a close call and didn’t know it.

I knew Bill well enough that he wouldn’t be insulted by my intrigue with the bar,  his friends, and old memories. I signed his card and bid him adieu. 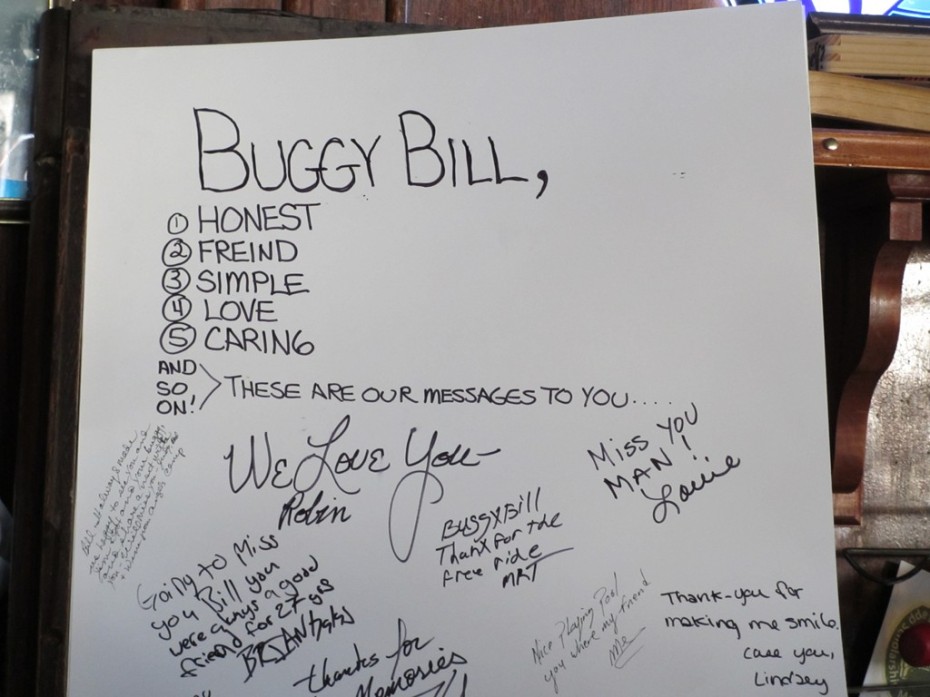 If the walls of the place could talk…I’d be there every Saturday night.

We all have to shop. I’m one of those who hates shopping, for anything. But, when I’m with my grandkids, I love shopping because I can spoil them rotten. They never ask, but I prompt them, wouldn’t you like some ice cream? Maybe we should rent a movie?  I let Owen be my GPS and guide me to their favorite market, The Nugget. If you must shop, and if the place is artistic, all the better in my opinion.

Very few grocery stores have statues along the roof line carrying bowls of fruit on their heads. Gorgeous. Costly.

Instead of ugly plastic bins for recycling, an artist was commissioned to provide a cover-up, highly attractive and valuable as a work of art. I loved it. I should have thought to take pictures inside the store as well. People were relaxing, drinking a coffee at an in-store Starbucks and enjoying a pastry. I could easily see myself moving in with my easy chair and a book and staying for  the day watching people  and snacking periodically. Oh, yea!  If you must shop, do it at The Nugget style. They had stuff I had never heard of. 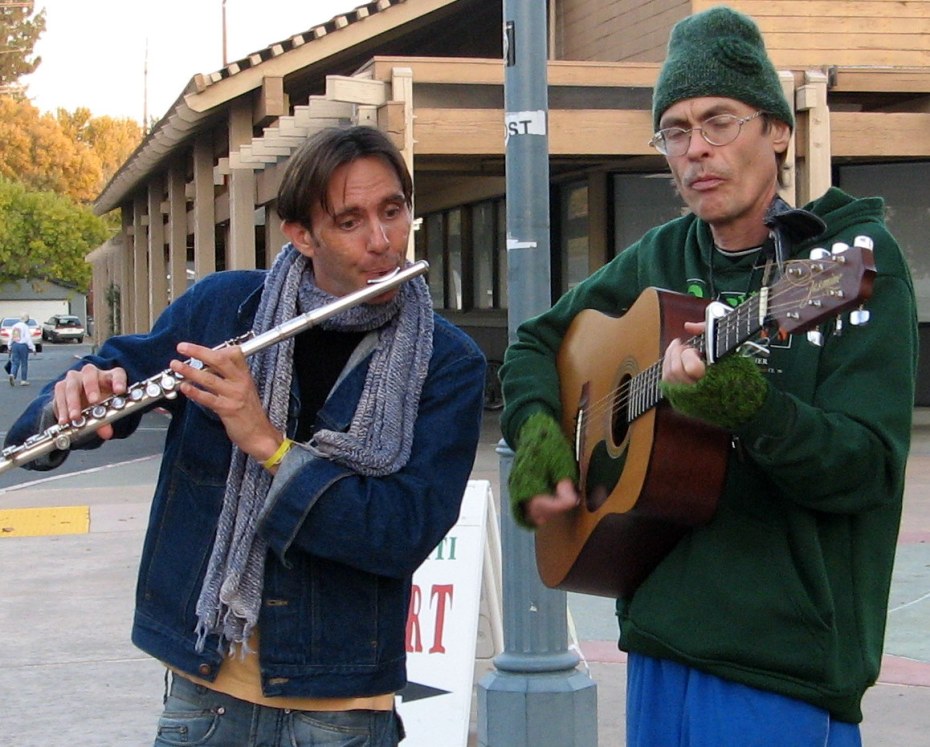 We tarried outside to listen to the street musicians. Owen knows the ropes. “Do you have some change Grandma?”  He put the money in the hat.

Then, I got GPSed all the way home. “Straight ahead. Slow for next intersection. Signal now…” Such a deal. Owen learning to drive by sight.

After dinner, Theo continued teaching his mother how to play Yugio, a complicated game of cards that  she struggles to learn. This was  her third lesson and she is slowly getting it,  a game the boys play swiftly with their friends all the time. I was glad it was her and not me. I remember when I realized my kids were smarter than me. Payback time is at hand.

My trip involved an appointment with  orthopedic surgeon Meehan,  in Sacramento. Good news, no surgery needed, but about six months for my hip to heal so I can go back to hiking, walking and biking. Right now, I’m limping but slowly getting better. Life is good.