FRACKING THREATENS OUR WATER AND AIR.

Hydraulic fracturing involves injecting millions of gallons of water with sand and chemicals under high pressure down and across as far as 10,000 feet below the surface. The mixture causes rock layers to crack and open and allow the oil to penetrate the sand particles  so the natural gas from the fracture can flow up the well. Natural gas is cleaner than other fossil fuels like coal and oil, but not by much. It is mostly methane and it traps heat, it leaks readily and like the residents of Dish, Texas complained, “We have unexplained headaches and sickness in  people and animals since the drillers came to town”. Air quality tests showed high benzene pollution in the area.

But, the big danger is water well contamination  and earthquakes. Thanks to intensive lobbying from then Vice-President Cheney under President George W., Big Oil and Gas is exempt from critical statutes in all major environmental protections, The Safe Drinking Water Act, The Clean Water Act, The Clean Air Act and laws governing the disposal of toxic waste. Pretty Cushy if you are in the oil and gas business, right? And, frackers are allowed to keep secret what chemicals they are pumping into the ground.

How can that be? It’s true.

Now let’s talk about groundwater, supposedly it belongs to everyone. Like the air we breath, it is a life necessity and no one can buy our air and make us pay for it, and so far, we’ve managed to prevent corporations from buying control of our water. They’ve tried, though. In California, we think of our groundwater as a water savings account. We can always get water, right? That too, is beginning to change with high water crops, walnuts, pistachios, almonds draining away mega amounts of water.

The Western United States is typically dry. Our water supply is used from reservoirs because very few natural lakes exist in California. Reservoirs are man made. We’ve kind of kidded ourselves, or the powers that be have, by damming rivers and reducing them to a trickle. Holding water back worked but it  proved to be the wrong way to treat our rivers. And depending on a pipeline that steals water from the north to make the desert bloom in the south, was then and is now a questionable practice. The truth is that California groundwater would always save us in a drought. Now, that water is in big danger, we need to rethink that.  Fracking is only part of it. But, it is the most dangerous part of it.

In our quest to view the Olympic Peninsula, we landed at Bogachial State Park, about seven miles  from the town of Forks, situated on the forks of four rivers, the Bogachial, Quillayute, Callawah and Sol Duc. 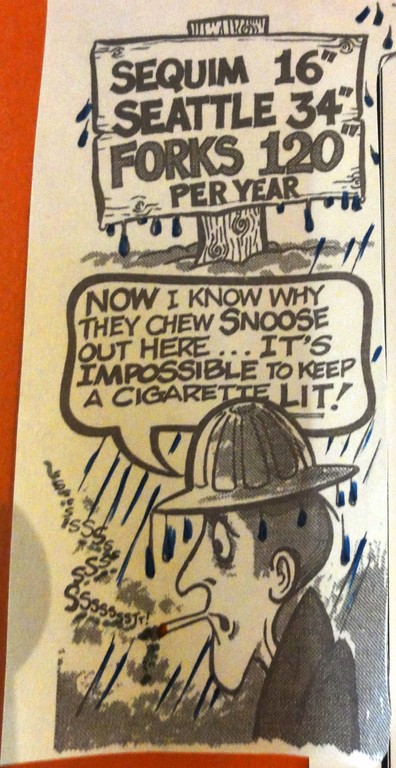 Those rivers are filled by the rains, a common source of jokes about the area.

This is a small museum and what I liked about it is the human stories.

There are some great artifacts, like this camp stove. The docent told us that the surface would fit 50 plate sized flapjacks on it. The “bullcook” must have been a very adept man to work with a wood stove like this monster and keep those huge appetites well fed and happy.

Some of the first chain saws look complicated and were dangerous to use. Some early saws were steam driven, some gas driven. Seems impossible that two mean could lift and run this saw.

Which made me think, how did the Indians cut those huge red cedars down to make their boats. Here is the answer below: 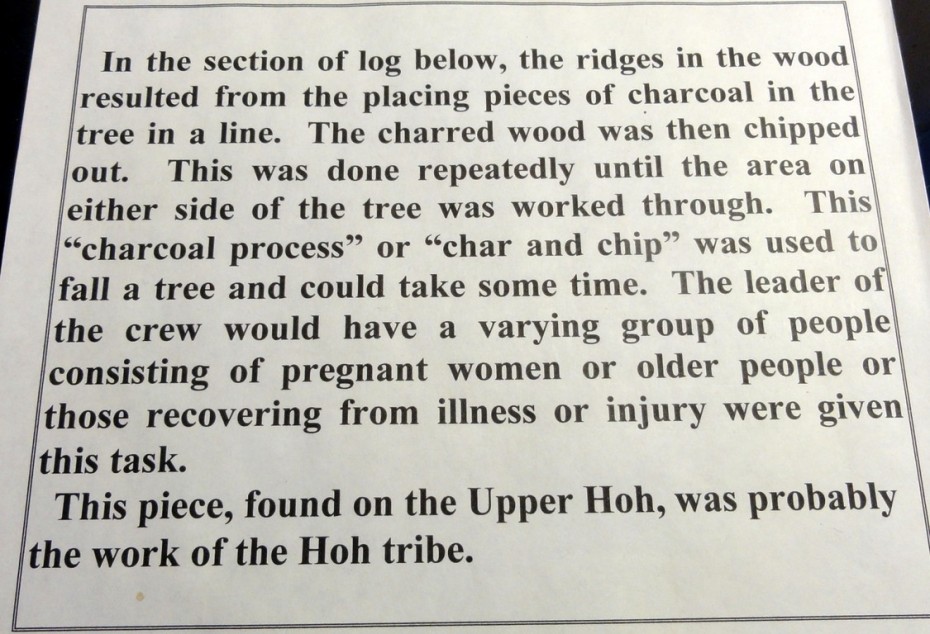 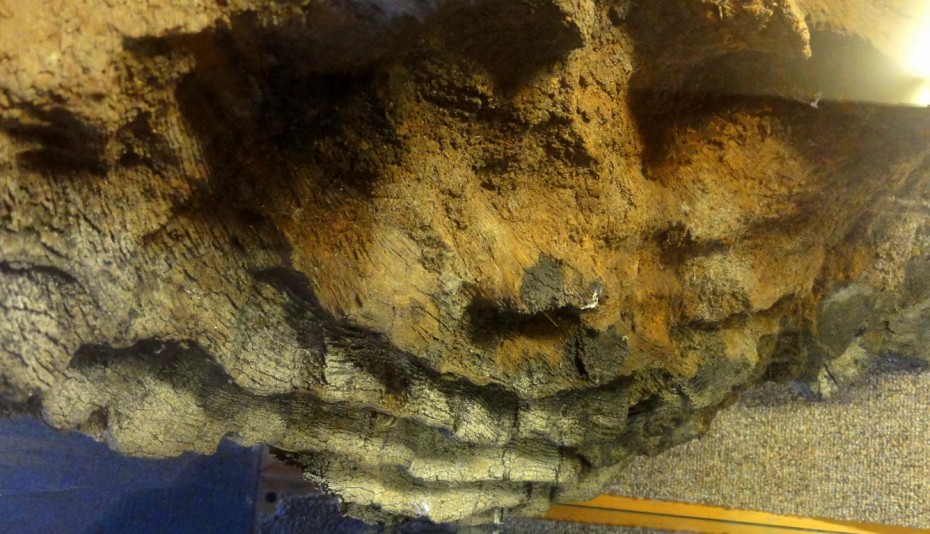 The people who settled here were resourceful and hard-working. They had to be strong and tough. This is Ole Boe and his family. 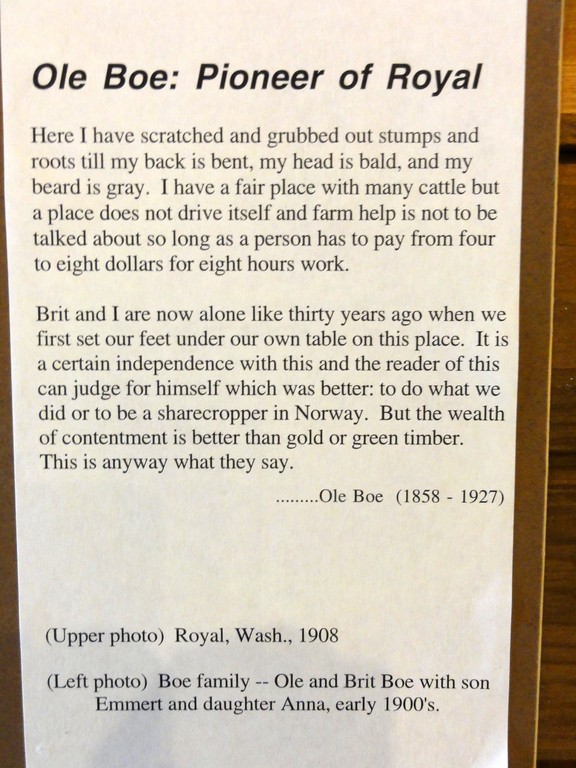 John Huelsdonk doesn’t look like a big man. His story reminds me of our own “Mountain man” Monte Wolfe, who packed a stove down into the canyons of Calaveras County. Monte was not a big man but he had legs like fence posts. John is older in this photo but look at the size of his left hand.

Women were no stranger to hard work, either.  Sarah ?, (I missed her picture)  raised her six children and when they left home, she started a pack train of horses and took people into the depths of the rain forest through mud and snow and showed them the beauty of the country. She started this business in her 50’s.

I love the stories of the  loggers, trappers, hunters, farmers, homesteaders. This old logging truck carrying a full load, no jake brakes, no massive chains to hold the load.

It had to take guts to drive this thing across this log bridge over a river canyon. I quail at the thought.

A tree damaged by a hungry bear. They would come out of hibernation and damage trees, so hunters were employed to kill bears, and paid by the pelt.. They were successful and no bear range their former lands. Wolves too, have been obliterated. Re-introducing predators has been very successful and healthy in other states. I wonder if Washington will ever try? 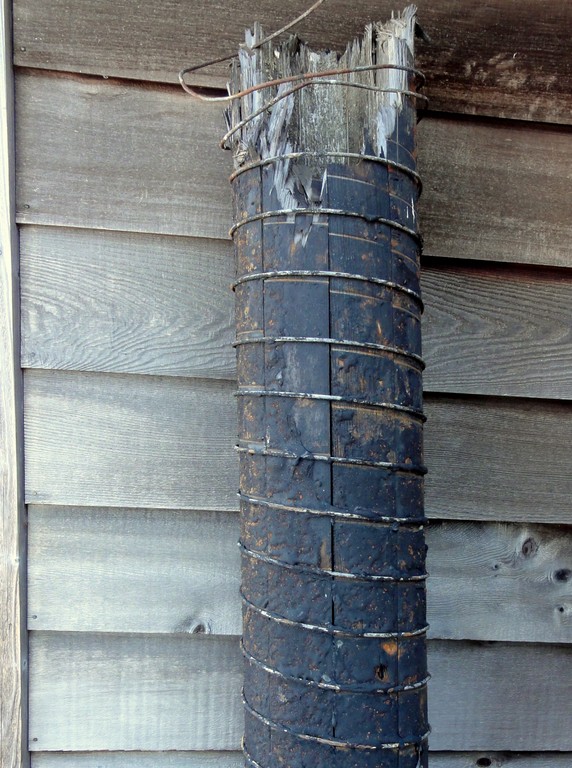 Early homesteaders made water pipes out of bound and tarred cedar boards.

I enjoyed this museum, the people it represents, some of the fun lingo of the loggers and the equipment used to fall the huge red cedar that provided everyone a living. The area at one time was the logging capital of the world. Logging practices today, clear cutting in particular, are to me offensive.

The motorhome is parked in the Apgar Campground of Glacier National Park near West Glacier, Montana.

Yesterday Mary and I drove the Bronco along 42 miles of the Going To The Sun Road in Glacier National Park including going over Logan Pass which is at 6,649 feet elevation. It was a cloudy with some sun kind of day. It was also quite hazy which did not help our photographic efforts. You can read all about this road by clicking this Wikipedia link… http://en.wikipedia.org/wiki/Going-to-the-Sun_Road

Here are some of the photos that I took yesterday… 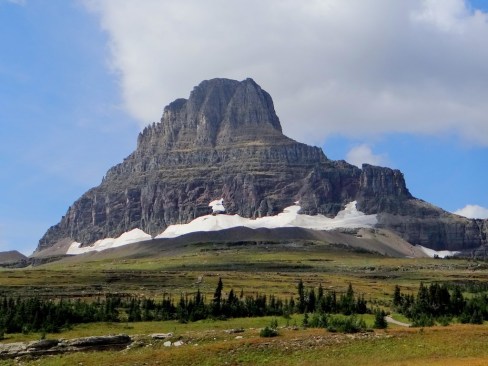 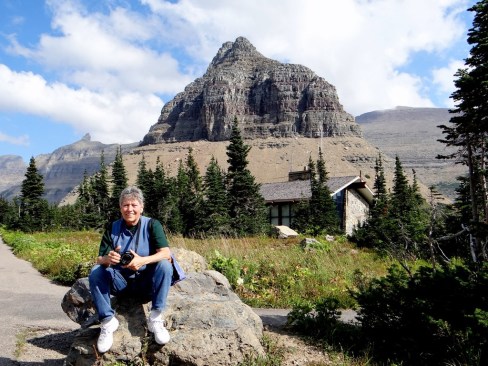 To see the other 30 photos, you need to click the following Picasa Web Album Link. To fully appreciate the beauty here, I recommend you view with them in the slide show mode at full screen… https://picasaweb.google.com/110455945462646142273/GlacierNationalParkMontanaDay2

To read all about this beautiful park, click this Wikipedia link… http://en.wikipedia.org/wiki/Glacier_National_Park_%28U.S.%29

Enjoying beautiful national parks is another joy in the life of a full-time RVer!

The red dot on the below map shows our approximate location in the State of Montana. You may double left-click the map to make it larger…

If you have not checked out my Ramblin Man’s Photos Blog, you can do so by clicking this link…
http://ramblinmanphotos.wordpress.com/