Our goal as we put miles on Highway 2 toward Seattle was Phillips County, Montana, two stops, both small towns. First Saco where Chet Huntly was born and raised.

The one room school house  he attended held ten students. I liked the way the teacher could just  stand by the door and raise and lower the flag each day. 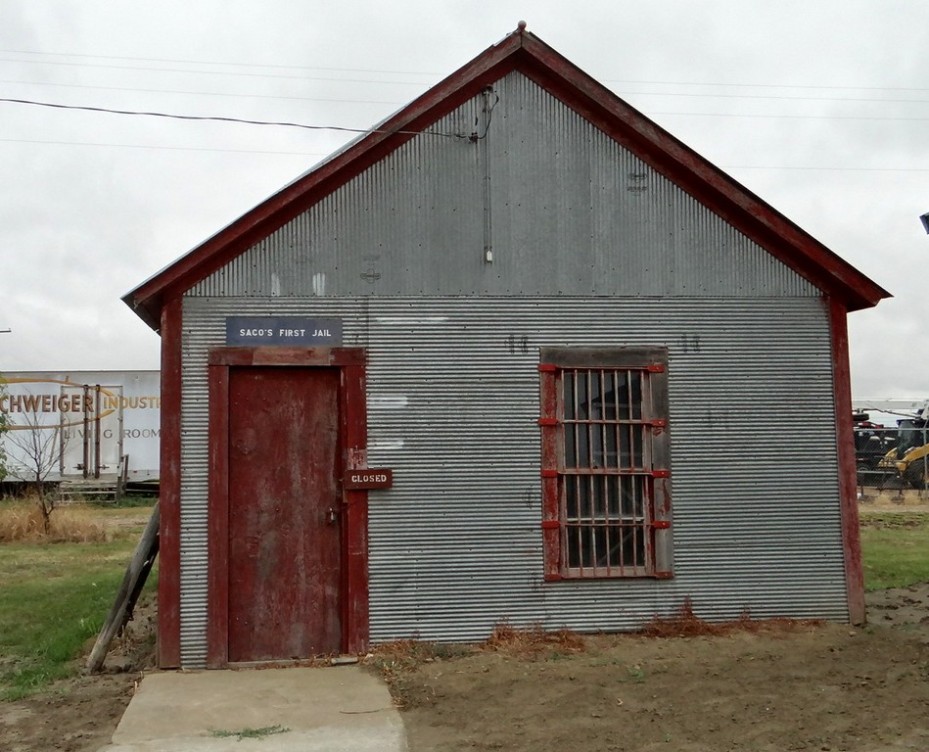 They preserved a one room jail and a small church. The stop takes about ten minutes. The site is unattended and the classroom is behind a floor to ceiling chain link fence. 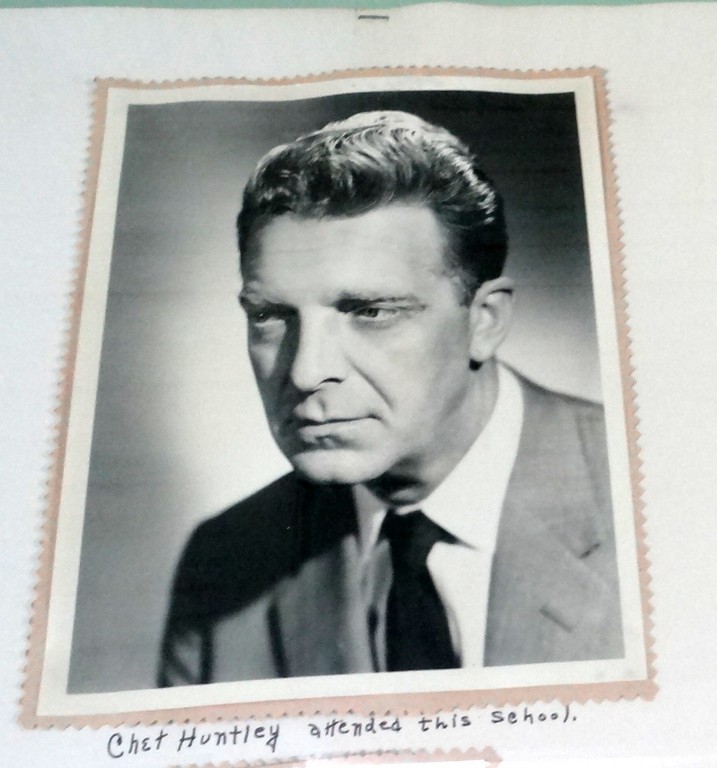 Pictures of various students and teachers are safely tucked behind glass, as they honor their favorite son. Saco is tiny, population about 200.

Our major goal was Malta, a small  town of 2,000 with side by side museums of major importance. The Great Plains Dinosaur Museum,  and across the parking lot from it, Phillips County Museum, honoring pioneers from this neck of the woods.  I chose the Dinosaur Museum and Jim opted for the pioneer museum.

In the old days, archeologists went out with horses and a buckboard to gather fossils. In fact, fossils from Montana were all over the United States in Museums, but none were housed in Montana.

Fossil hunters using tried and true methods, dug up bones, used a varnish on them to help preserve them, then encased them in plaster to protect their fragility. The bones were then delivered to museums or labs for study.

Montana is one of the richest dinosaur repositories from the cretaceous period in the U.S. Looking at the map, the green areas are where to find fossils. Farmers and Ranchers would routinely find bits of bones in the soil but no one was doing anything about it until a group of archeologists founded a volunteer organization that secured a grant to begin the Great Plains Museum. They finally moved into this state funded building in 2002.  Small, but expected to expand, it holds fossils from Phillips County and a working field station for their work.

The way things are done today, when the site is identified, the major dirt is removed from on top by machine.

The same type of work takes place, with dental picks, brushes, and small hand tools until the bones begin to appear. 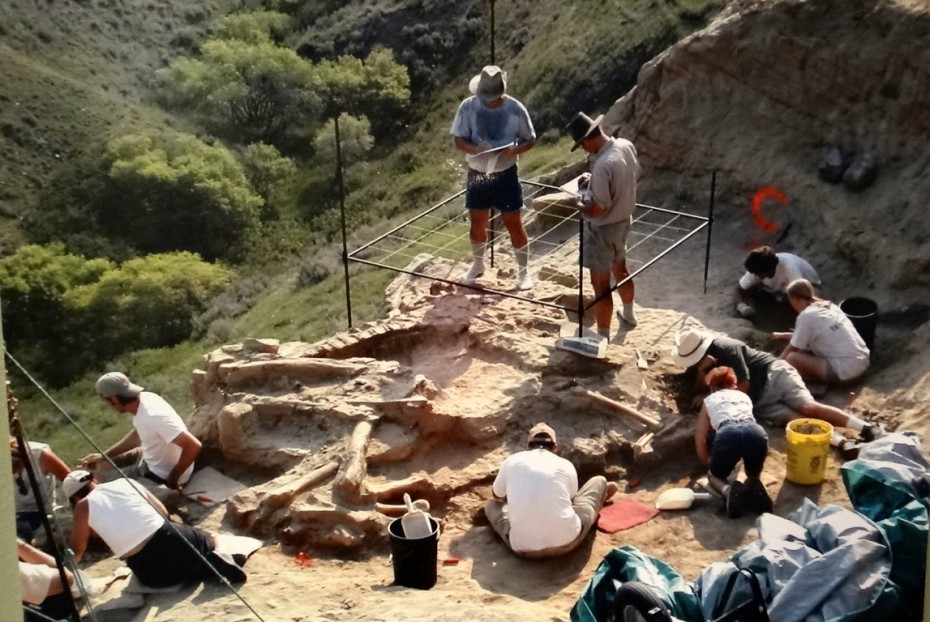 This dinosaur was on a steep hillside and couldn’t be platformed. 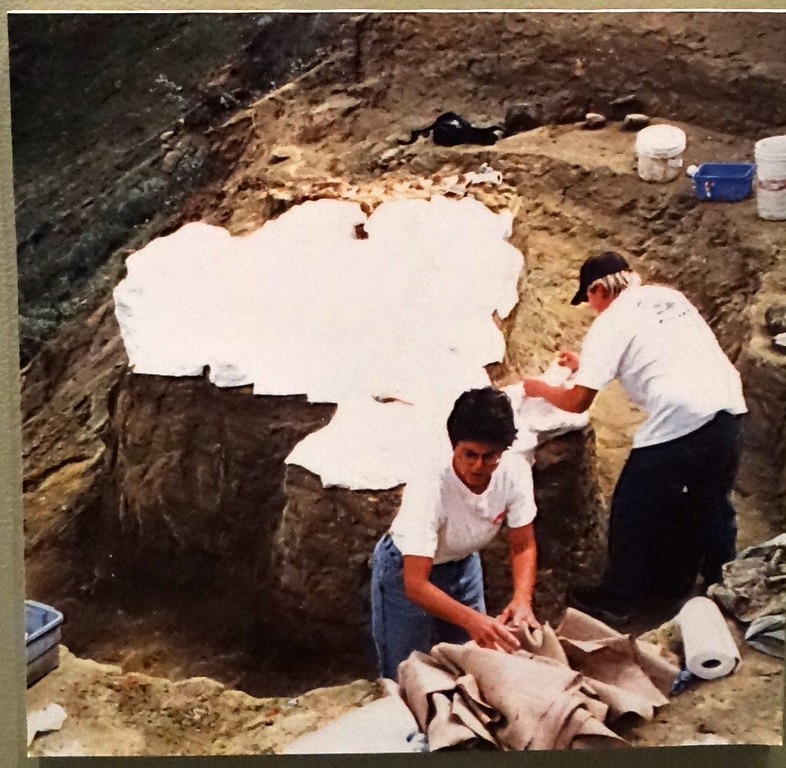 Platforming gives the workers a “table” to work around and makes removal easier.

And this is the result. Julie, a beautiful and complete raptor. Names are often chosen from the landowners family, or from the archeologists name. An Austrailian team discovered this fossil and wanted to name it Julie after a member of their family. The land owner had a daughter named Julie, so it was a perfect name.

Not all finds are as complete as Julie, but now major finds are kept in the county. They allow them to travel to other exhibits and they are open to scientists for study.

This is a picture of Sue Frary the curator and lead archeologist at the Museum. She does field work and study here. Very friendly, enthusiastic and informative, the museum encourages people to take vacations here, join a field exploration and maybe even bring home some fossils. 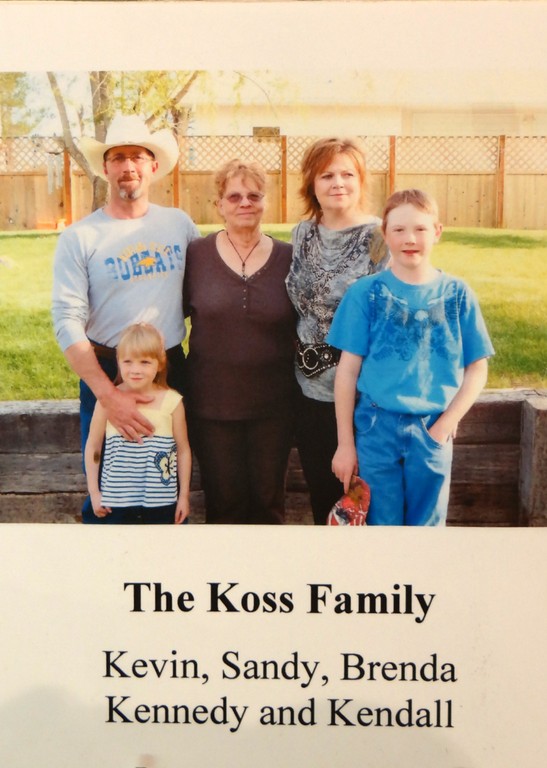 The Koss family did just that and 4 year old Kennedy Koss made a major discovery.

Kennedy’s find above, discovered in 2008 and named the Kennedy Koss Horn. It is a triceratops horn with a bite mark on it. Sue told me another 4 year old found a dinosaur tooth.

And another child found the Giffen Stegosaurus “spike” or plate, as shown in the figure above. Giffen is the only Jurassic dinosaur discovered so far in the area.

This is Leo a young male dinosaur. He is one of the few dinosaurs with mummified skin. He shows tendons and features usually not present on old bones. He travels all over the world and brings in money to help support the museum. 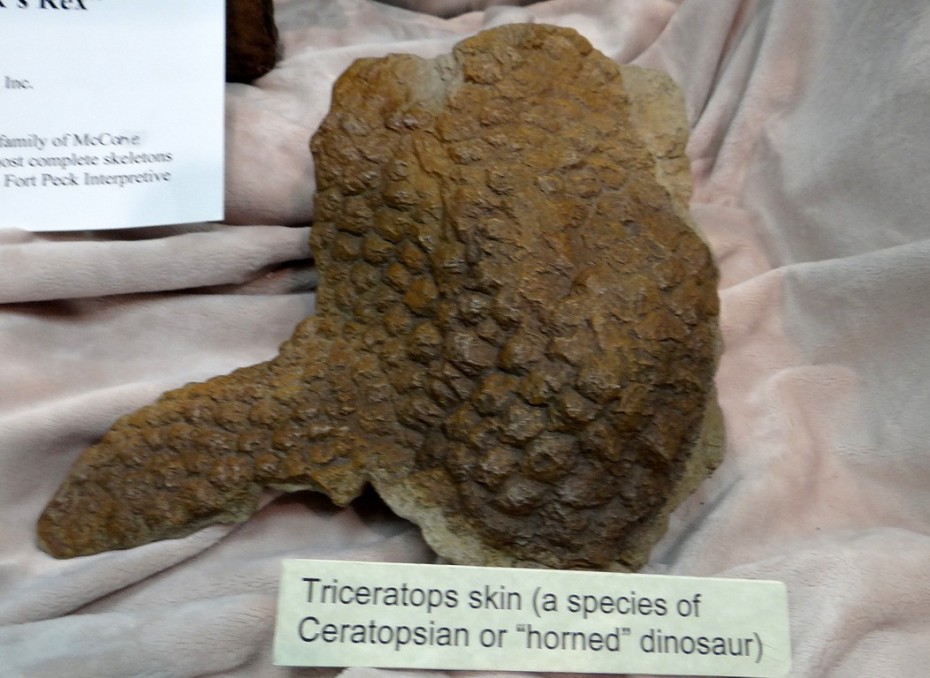 An example of dinosaur skin. 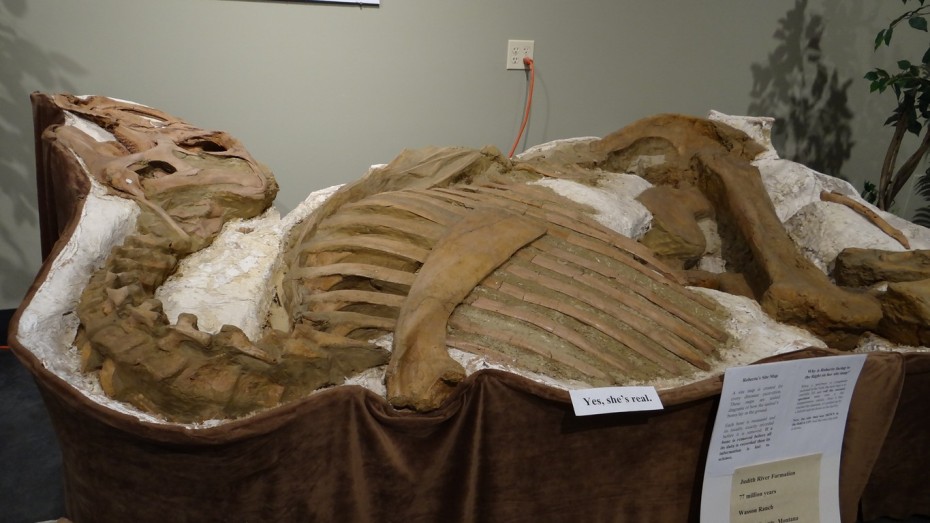 And this is Roberta. She still sits in her plaster bed. She died from a bite that got infected. 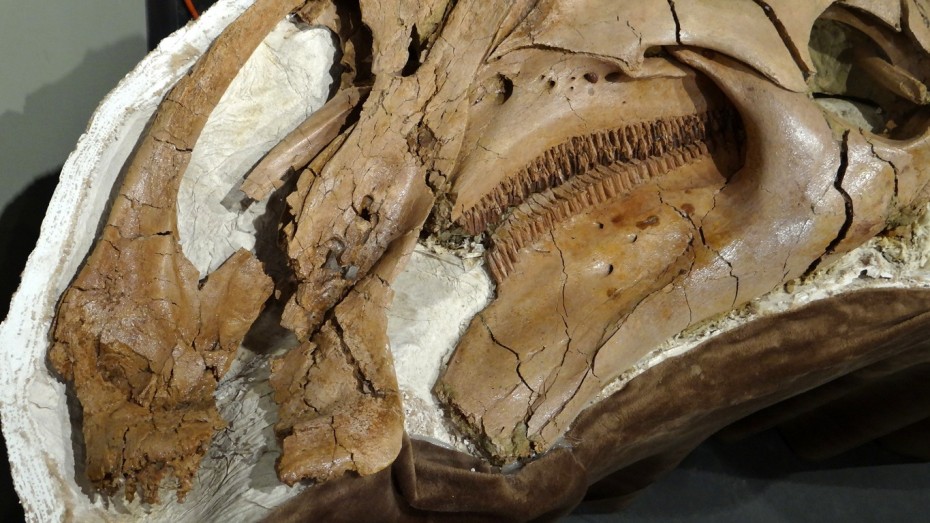 In this close up of her head, the second pendula from the left is a fracture that tried to heal. Above the fracture are two darkish holes where infection set in and most likely caused her death. 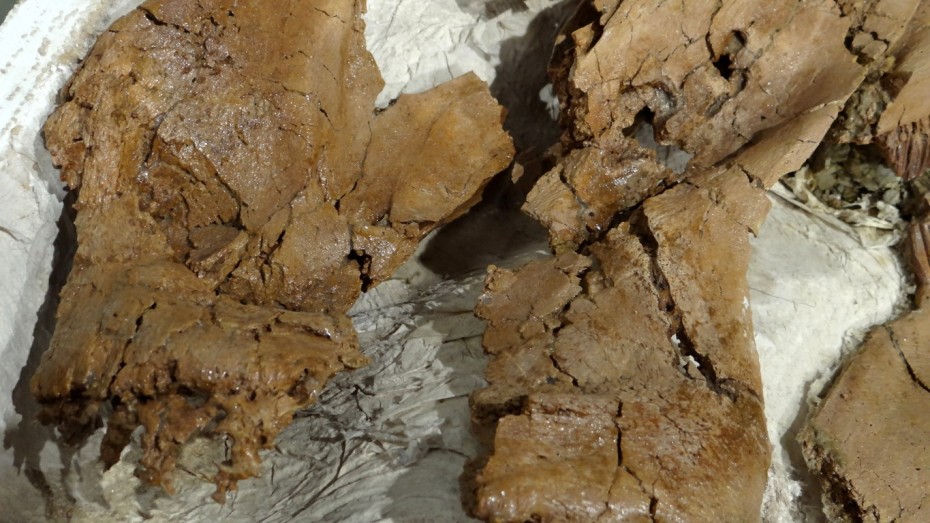 This is a close up of the two bone parts of the face. On the right the open fracture and above it the infected holes. Somehow, other dinosaur museums didn’t interest me as much as this one. Some how, gawking and oohing and awing over the immensity of the creatures wasn’t as personal as this small museum. 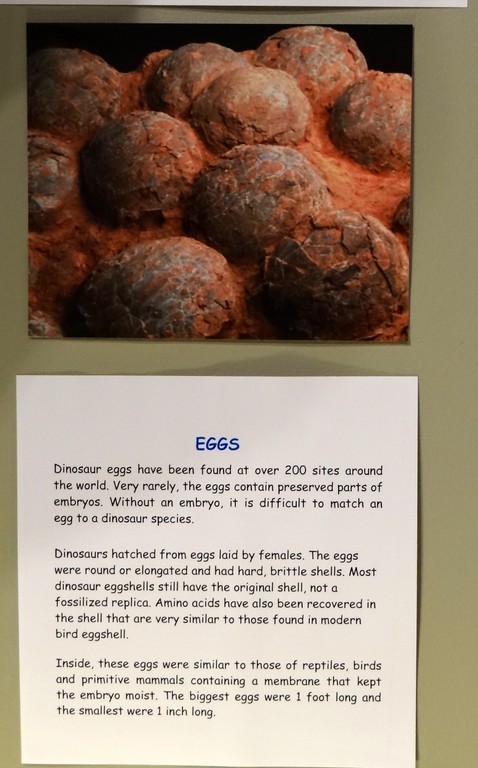 A plant dinosaur specimen. A type of redwood tree that apparently grew all over Montana.

There is a lot to see here and I really enjoyed this place. Do go. You’ll learn a lot in a very interesting fashion with an interesting curator. Better yet, send your grandkids on a field trip. And, last, I chose to wear orange on Sunday.

The drive into Blue Lake State Park was kind of desolate. The country really opens up with few signs of human activity.  Much of the land around here is Indian Reservation. We saw Indian Ponies and cows eating the green grass along  the roadside. We could see fencing, but these animals seemed used to vehicles and had free range.

As we drove into the park, we saw this rancher and his dog riding a quarter horse and leading another horse  into the park.  This is a primitive park with no water or amenities save the lake. It took us some time to find a suitable level site away from the sand where  sharp wind gusts that come up push in that grit.  I was able to get my bike out and ride for the first time and it felt great. It’s quiet here and the peacefulness soaks into your bones after Albuquerque and Grants.  We are headed for Gallup then Canyon de Chelly.

Two hours later the quartet came back from their journey, just passing our camping spot. The horse on the left, Mash, is part thoroughbred and quarter, Paiute is a quarter horse. And Mattie, the herding dog, is part border collie. The quarter horse reminded me of my daughter’s horse and I asked if he rented them. No!  The horse on the lead is young and in training. “I just took ’em over some rough country,” he told me.  I love to ride but I hate those nags in the rental outfits.

I got to pat them down, remove a few burrs from their blankets and fur and they went on their way.

About dinner time, we saw the Indian ponies come in for a drink at the lake.  They seem used to people and ignore them.

Then more came, headed for a drink. Two colts were among the adults. 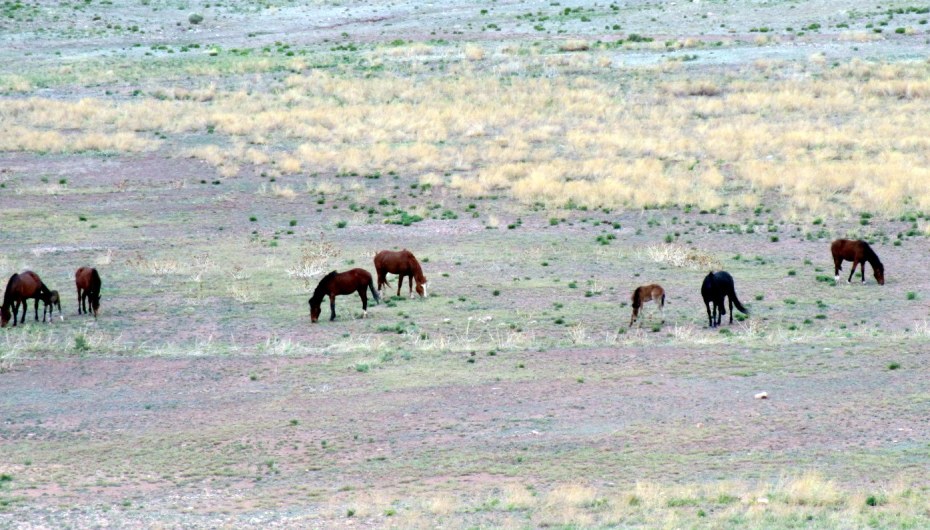 After their drink, they settled in to graze.

We watched them and some hunting raptors until the sun went down.  The motor home is outfitted with solar and we read until bedtime. We are tucked in for a quiet couple days before we move on.

BIKERS AND PEDESTRIANS ONLY

We left Wilsonville to continue scenic Historic Highway 30 with Jim complaining about poor signage. We kept seeing highway 84 East. We finally found the way, only to drive a couple miles and discover that Highway 30 is closed for four and one-half  miles to everything but pedestrians and bicyclers.  The roadway is a state park. The ranger informed us that the tunnel entrance and overpasses were made for Model A’s and modern vehicles can’t get through them.

Here is a picture from the visitors center showing a section of the old road we didn’t get to see. 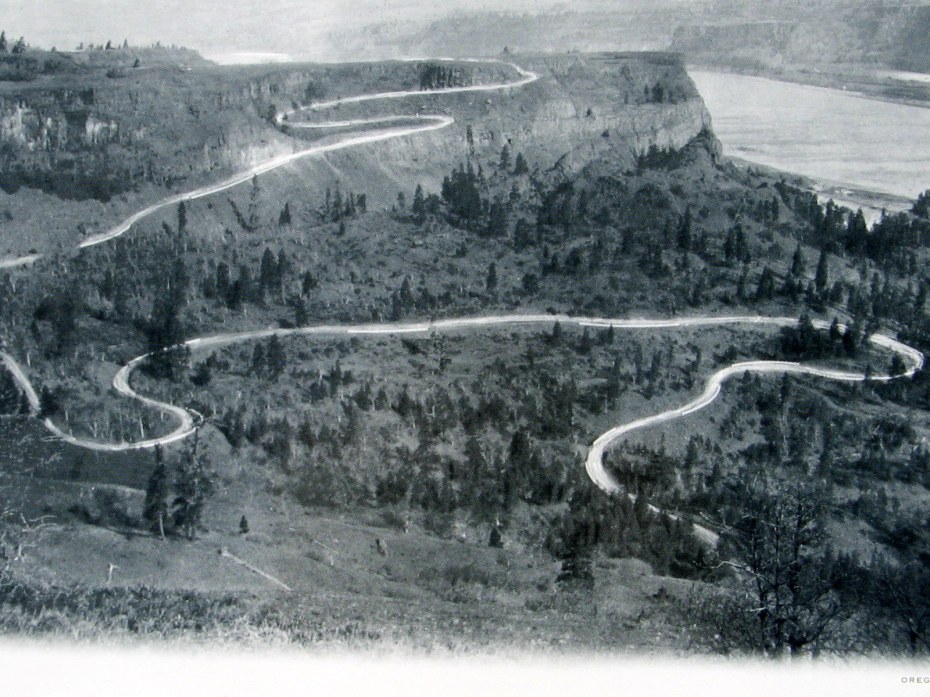 And, an old photo of the building of this almost insurmountable task. It’s quite a show.

What we did see was pretty spectacular.  The switch-backs  take your  breath away.

The scenery does too.

No water falls on this section, but the hills were abloom. We stopped at several overlooks but the wind was so fierce we didn’t hike very far though there are many trails available. 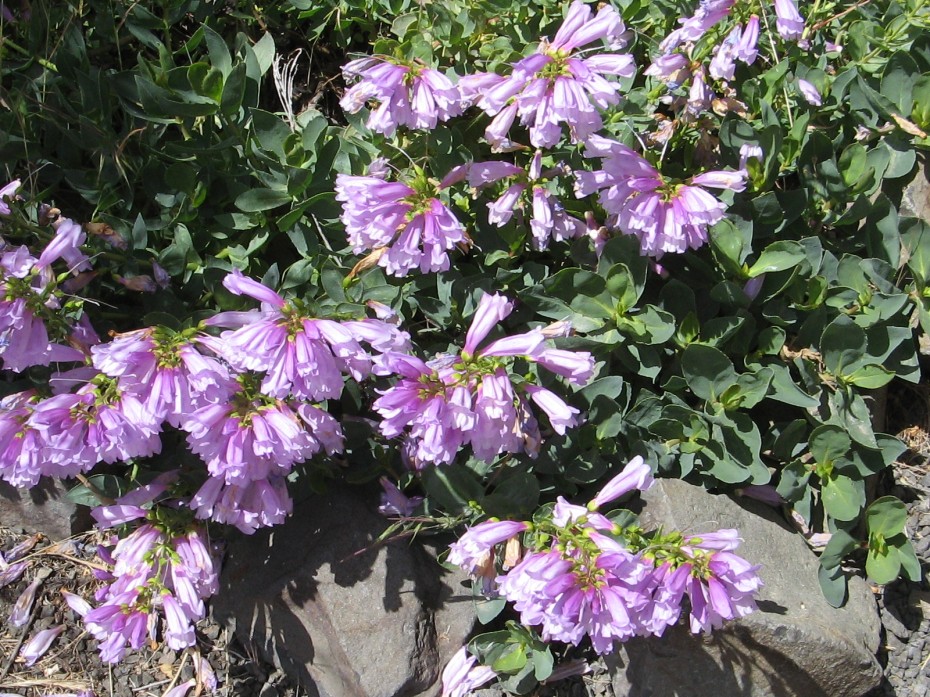 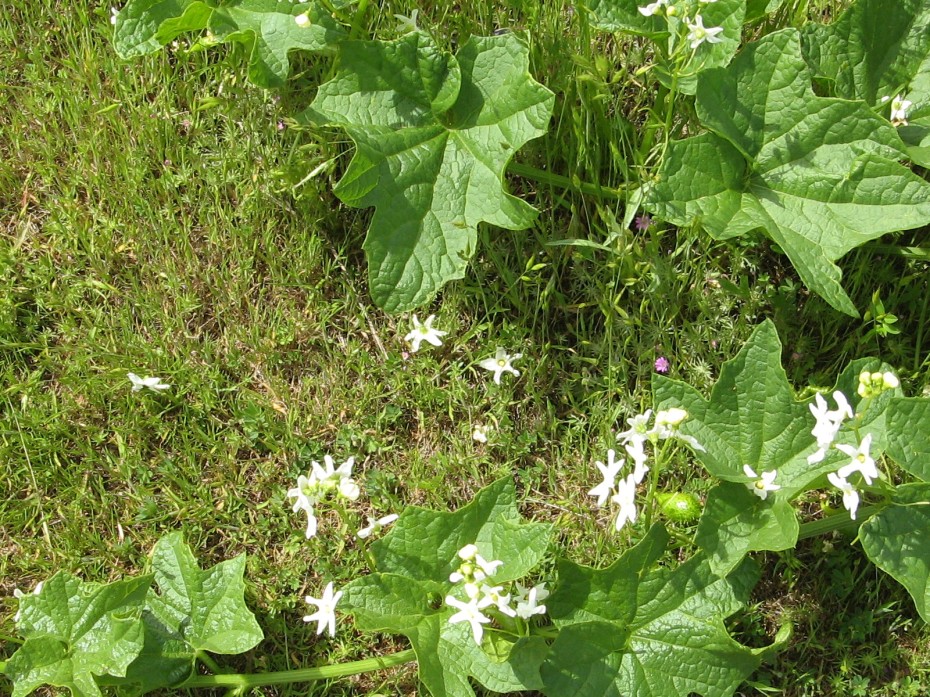 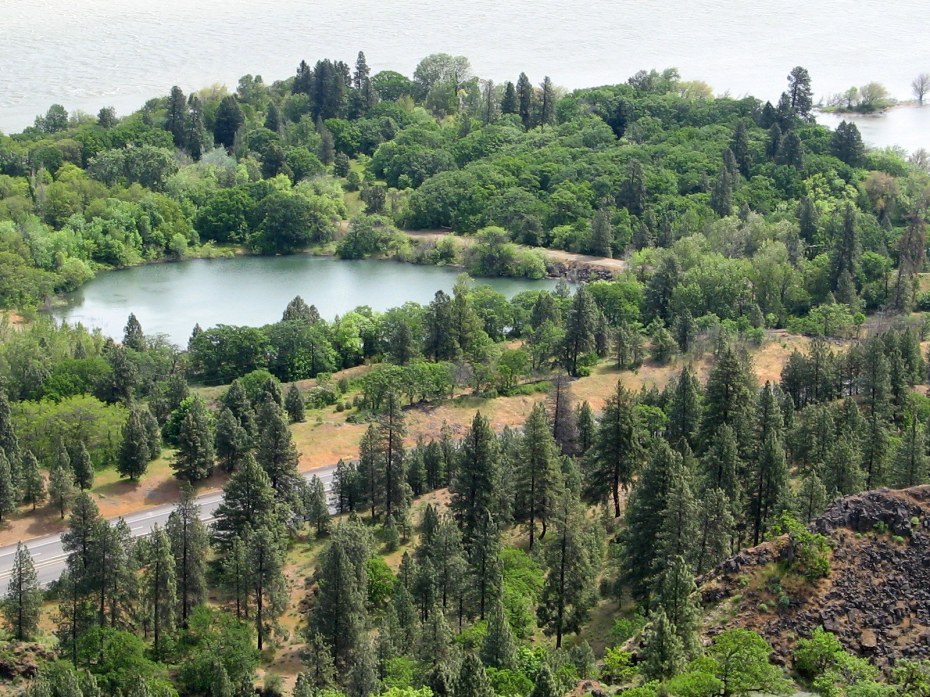 We covered a short nine miles yesterday and dropped into the visitor’s center. We ate lunch in the parking lot and spent two plus hours viewing the history and learning about the geology of the gorge.  A very worthwhile stop for all travelers. 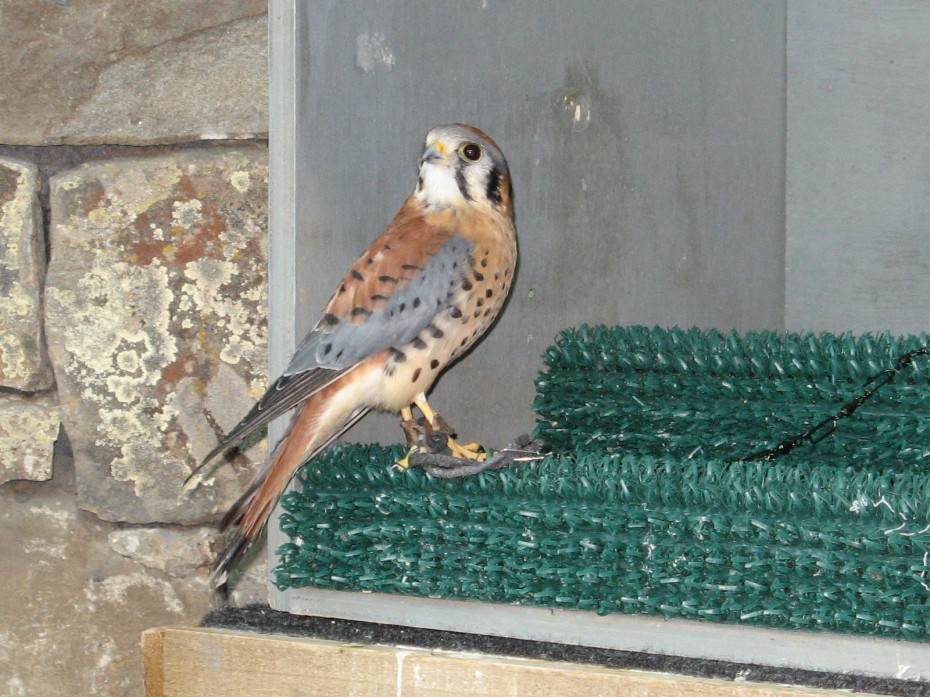 Unique to this center is an educational showing of several raptors they keep. All have been injured in some way and cannot be released to the wild. The kestral, above is the smallest raptor from the area.

A female red tail hawk has an injured wing.

A male great horned owl is nearly blind and can’t feed itself.

Yesterday, we visited the Bonneville Dam and fish hatchery near the end of the day. It, too is worth a visit. I had never seen a fish ladder and always wondered how they count the fish.

The ladder was built after the dam. No one knew if it would actually work, but the spawning fish took to it right away. Ladders are easier than some of the falls and rapids they have to navigate.  They are provided a resting area that funnels them by windows where counters view them and press a button for every fish they see moving  upstream.

The viewing windows for the public were pretty murky. Various breeds spawn at different times of year. The Chinook spawn is just about over. We didn’t see many fish, but it was fascinating even so. We are parked at the Dalles.