Nine miles west of Libby is the Kootenai Falls and Swinging Bridge.  I appreciated this sign because we have a place in our county referred to as Candy Rock that is popular with young people and there have been tragic drownings. The Corp of engineers dynamited one of the dangerous whirlpools but it still isn’t a safe place to play. A sign like this might be helpful. In fact, this is where the movie River Wild was filmed and where Meryl Streep got washed off the raft and nearly drowned. 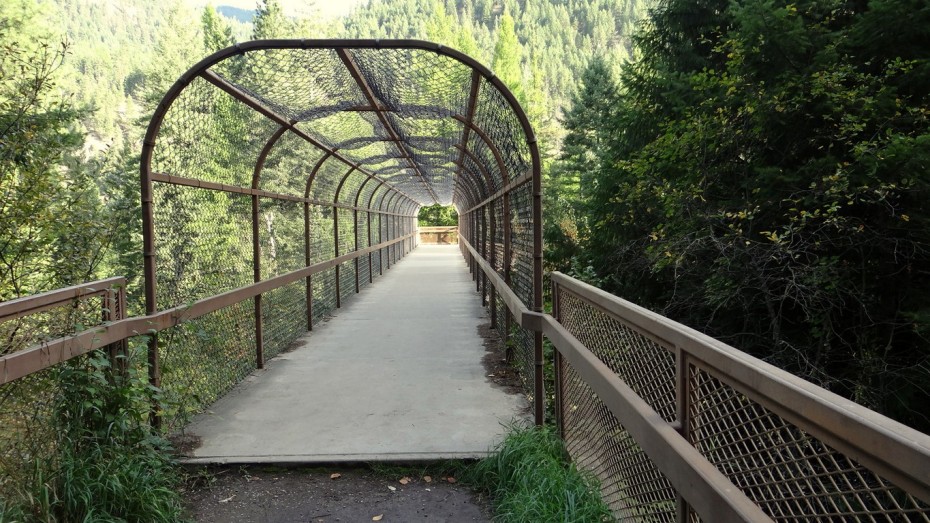 Before you get to the river bank, you have to cross this very safe railroad bridge which was one and a half flights of stairs up on this side. 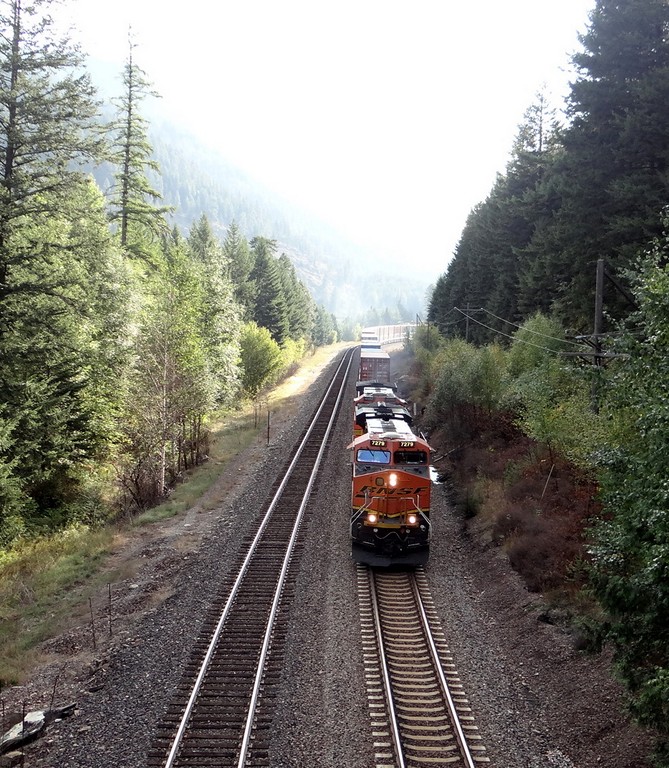 A train was coming while we were on the bridge, so like kids we had to watch it. Hey, a new experience for me. I hope you are chuckling. 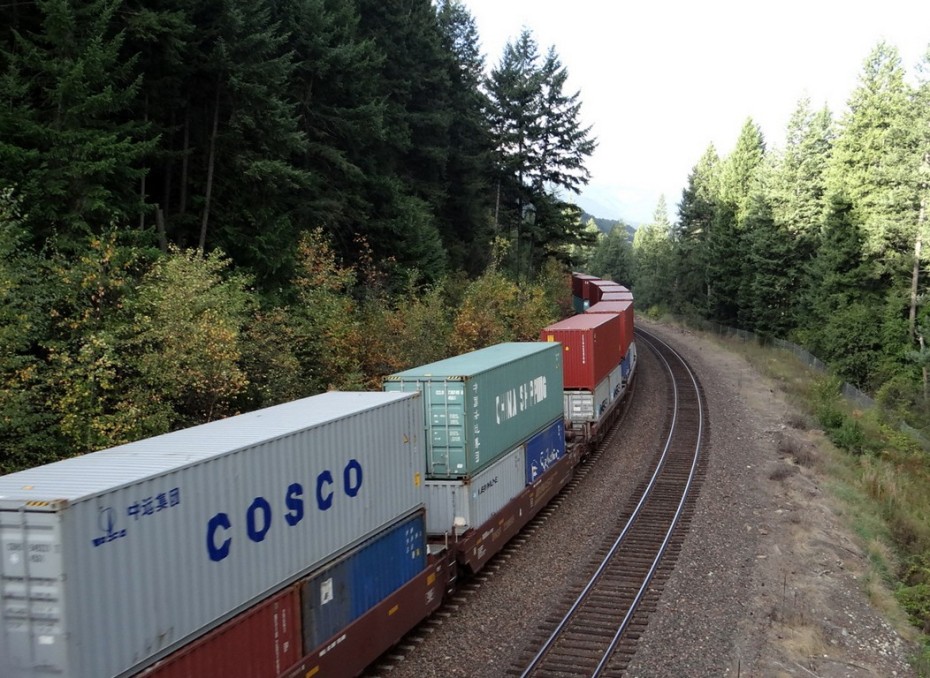 We didn’t watch it until it disappeared. (Jim moans that I’ll use up all of our picture bytes before I fly home.)

The down hill path was clean and easy looking, but that soon changed. 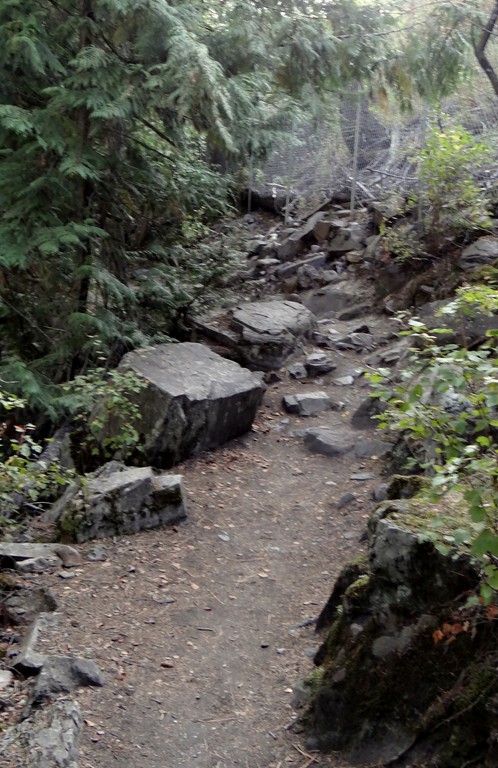 At the back of my mind, I’m thinking I’ve got to climb back up. This is my first  big challenge, a mile hike over rough terrain and…steps. Plus, this is a non-pain pill day. I’m on pain pills every other day right now and I know I’m getting stronger.

And there she is. I was expecting one of those bridges with net sides where every step makes you question your judgment. This one is well braced from below and much more stable but still gives a significant bounce.  A sign tells you no more than five people at a time on the bridge. This is a new bridge that replaced the old one lost in a flood. Built by the U.S. Forest service for fire access.

It still bounces a good bit with two people on it. Maybe I’m glad it isn’t the net variety. The chain link sides are pretty comforting. 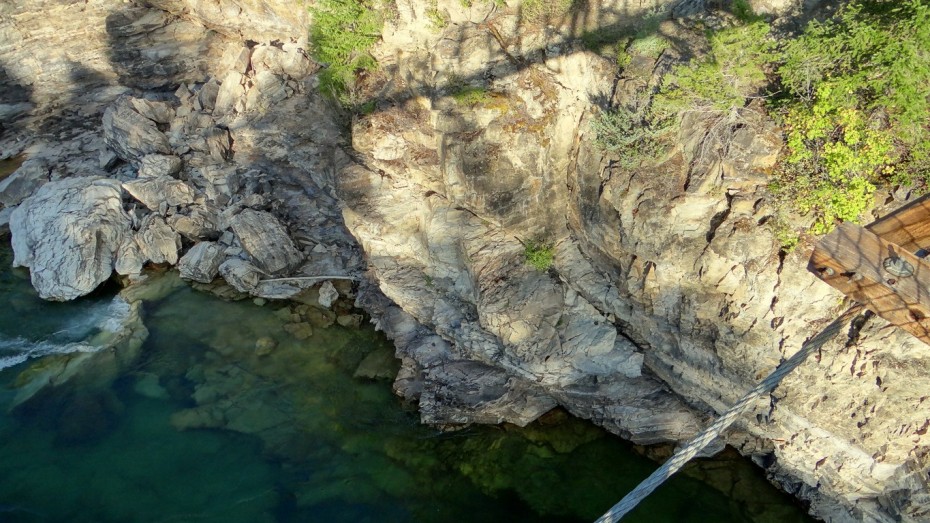 Over the edges of the bridge I looked for stromatolite formations. Signs about the geology talk about the formations formed in shallow water, but we are so high up you can’t really see them well. This is also a river of “folds” formations that cause great ripples. And, they talk about the various colors of sandstone in the area.

We got off the bridge and walked back to the right fork to the falls. I found one rock with the described formation-a stomatolite.

I did find some pretty colored rocks, like this baby blue and some lavender.

Yellow and pink. I couldn’t help but think how much prettier these rocks would look under water or after a rain instead of on this dusty path. It was a cold morning and I didn’t brink a water bottle.

I spit on a kleenex and swiped the rocks here and there. And it does show how pretty they are but I only had one kleenex in my pocket and Jim thinks I’m nuts anyway.

I don’t have a clue what type of tree this is. I think it may be a peeled one of the tree next to it. I wish it was labeled. What a beauty.

And finally the falls. It looks like we are level with it, but it is down a very steep, rocky cliff from where we are standing.

It falls about 300 feet in a very short distance. 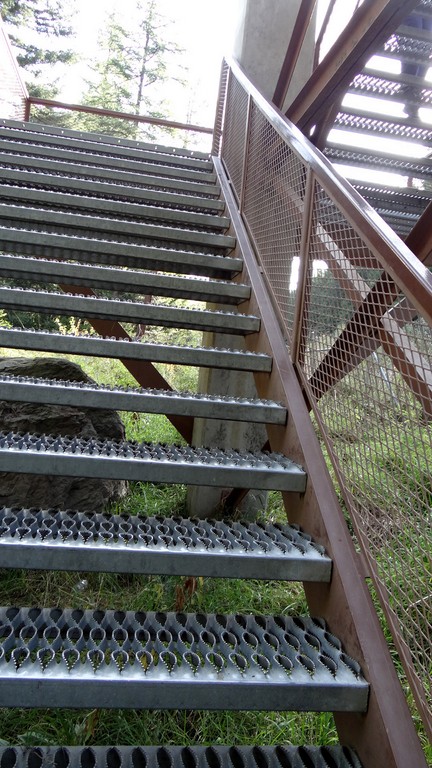 We hiked back to the railroad bridge and on the river side, there are 3 and a half sets of these long flights of stairs to get up. I was committed when I came, so I had to climb them without taking baby steps. A small epiphany for me, I slept well. This morning I feel no pain and I feel stronger. Good portent for the future. 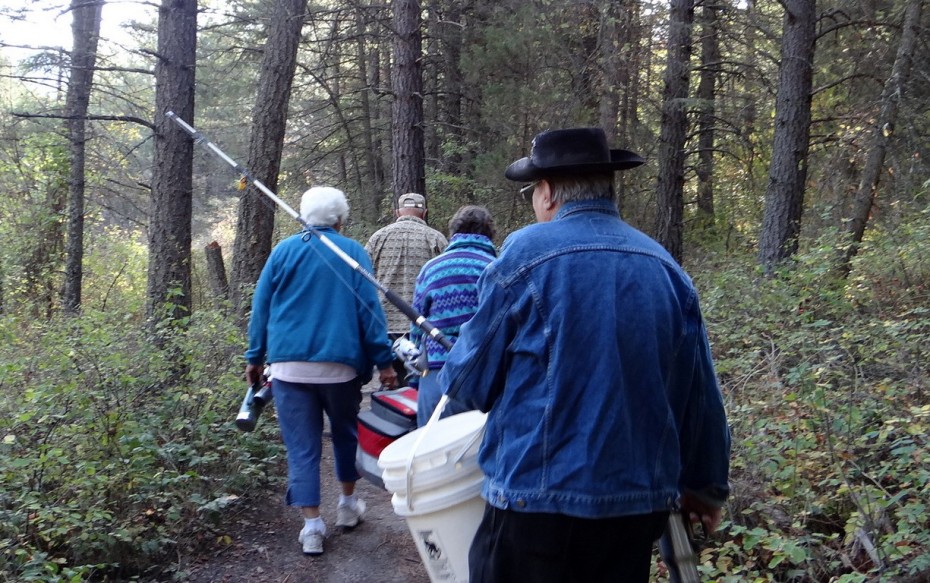 We met some fisher people on the path. They go for kokanee salmon. “Heard they were running.”   I expect that means spawning.

The Kootenai Falls is in Montana and we crossed into Idaho and stopped at Bonners Ferry. 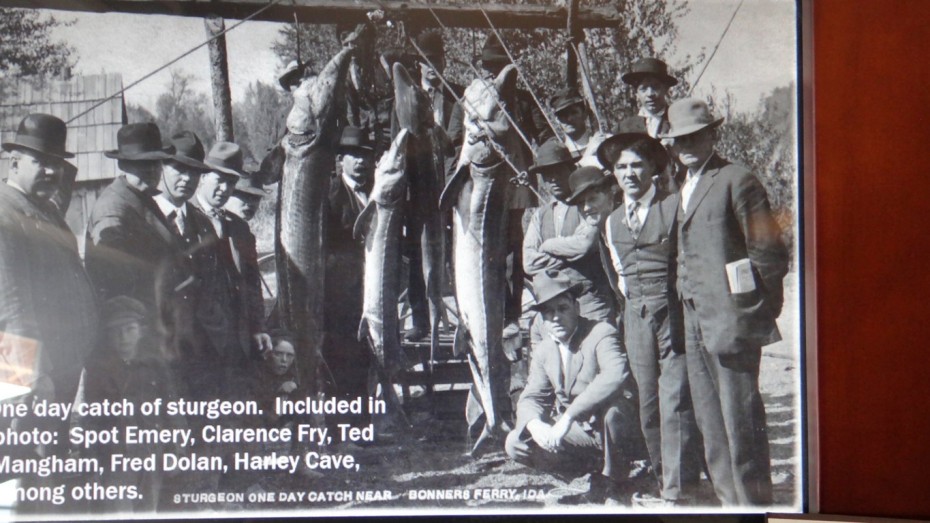 This is a days catch of sturgeon from the Kootenai River. I don’t know if they still exist. One picture showed a record size sturgeon of 315 pounds.

Bonners Ferry was started by E.L. Bonner in 1863. Gold was discovered and a frantic rush of people headed for British Columbia had to cross the river. Bonner was one of them. He noticed the hold-up getting across the river, got the crossing rights, and built a ferry here. After the gold rush, the economy was based on timber. Here a mammoth log drive of 80,000,000 board feet. 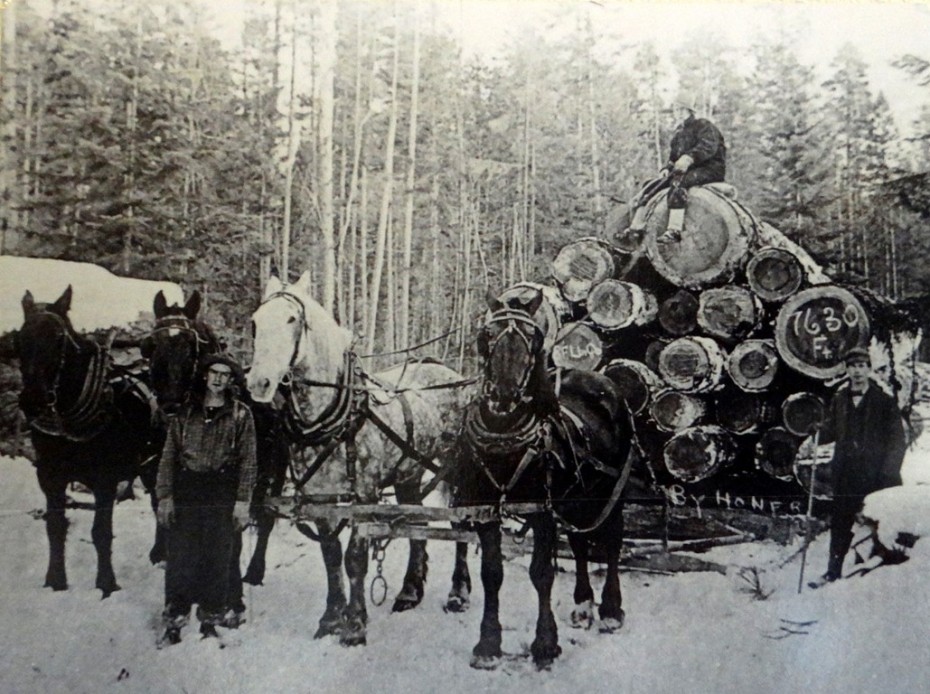 The size of the logs, the power of the horses and strength of the men is impressive especially compared with today where there is nothing left of these giant forests but “twigs”. I see trucks all the time with trees of 9-11 inches in diameter coming out of the woods, here and in California where I live,  also a logging area.

Not only the size of the logs, but the danger of riding with such massive logs aimed at your head as on this truck.  Even modern log truck drivers check their chains before going down hill with logs behind their heads. I’ve ridden out of the woods with one of them.

Now, that’s a load. The area thrived not only on its timber, but the Pacific Railroad came through here as well. 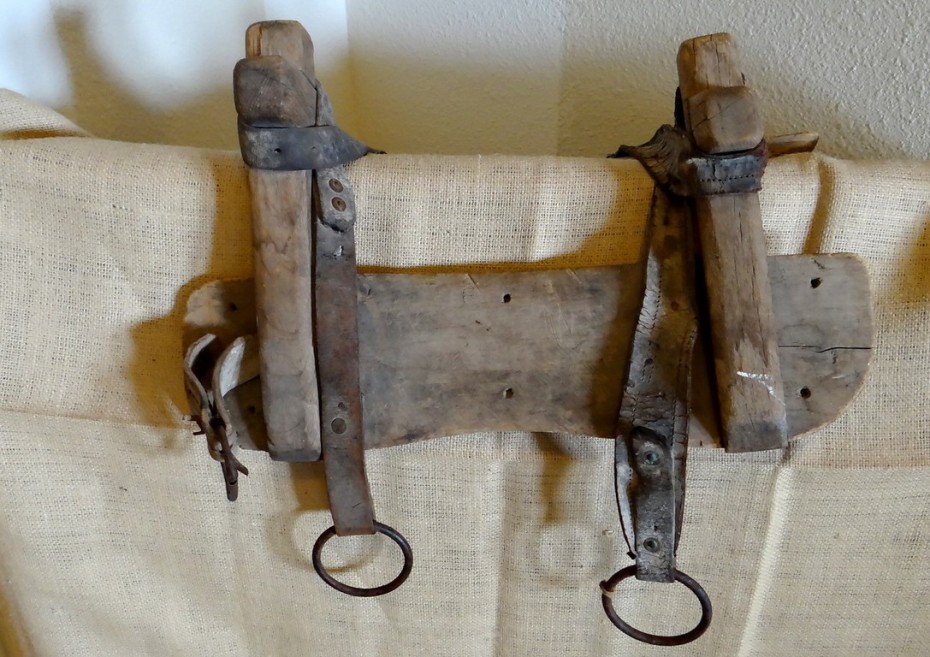 This was a wonderful museum.  William Wright’s saw buck pack-saddle, made of wood, from 1896. Wright ran a string of pack horses through “buffalo hump” country and up the Wild Horse Trail. He renamed Mosquito Flats by tearing down the sign and replacing it with one that said Paradise Flats. 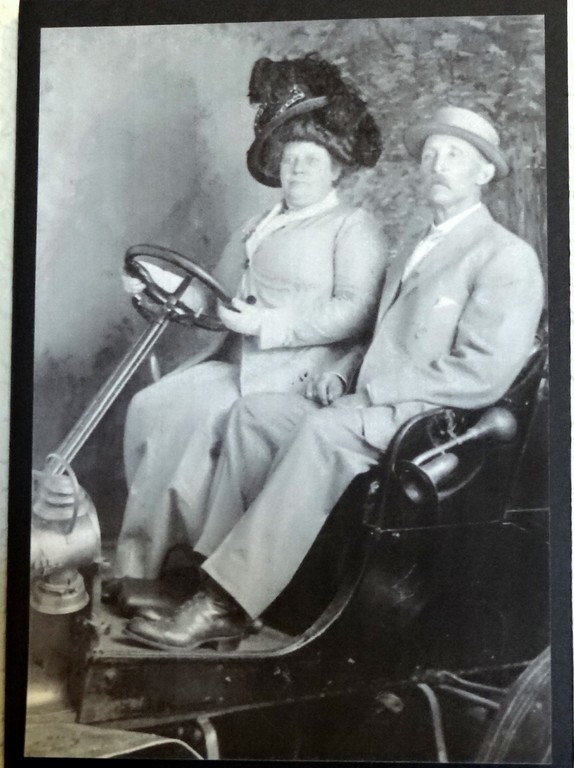 This couple is showing off their new car. But, look at the pride in that woman’s face. Isn’t that a hoot?  SHE’s doing the driving. 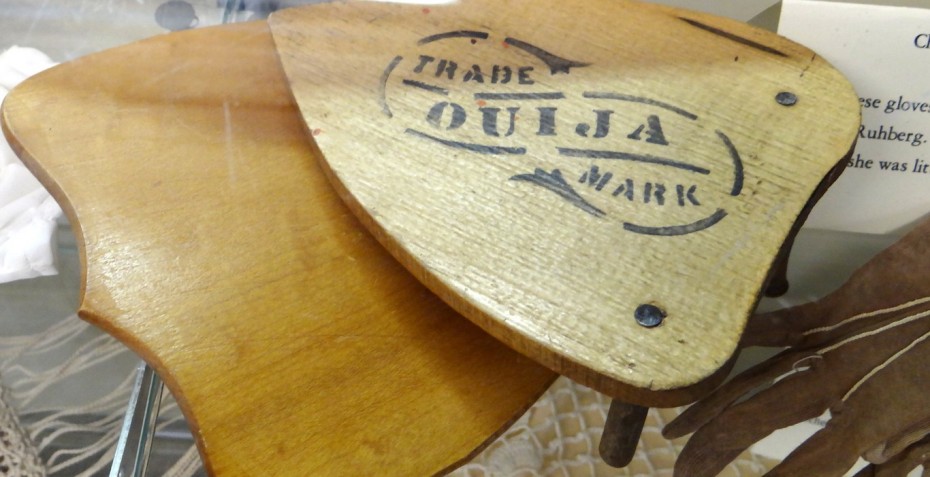 My mother owned a Ouija board, but, we and she thought it was pretty boring. She tossed it.

Most old clocks have a similar kind of look. This one was different and still chimed.

This museum had a lot of nice things, and good personal people stories. They had a beautiful portrait gallery of the movers and shakers of Bonners Ferry. The huge portraits, at least 100 of them, were accompanied by a biography below it like this:

This way you knew who they were and what they did. C.W. King was the youngest senator to serve in the Idaho Senate. 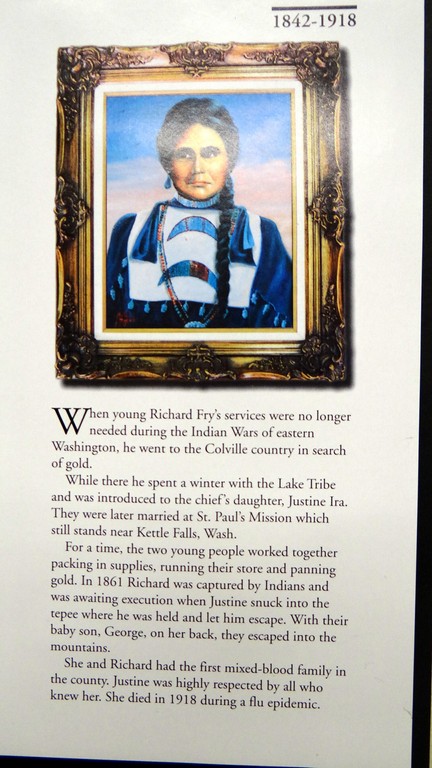 A woman who rescued her husband from an Indian Tribe bent on execution. You will enjoy this museum, and this community. Bonners Ferry is progressive. They have a farmers market and a brewpub. What more do you need?

I finally got a date for my stress test before surgery. It looks like I’ll be hanging out in Murphys until after Thanksgiving.  Not a negative; there are always tasks to complete. I always figure it is better to be busy than bored.
I’ve seen video snippets about driver-less cars in action, parking themselves, and wowing crowds. It’s for real. And, I was wowed by progressive Governor, Jerry Brown who has asserted California’s place in the future of technology by approving the licensing of driver-less cars. Hey, way to go, Jerry.
Have a look:
http://blog.seattlepi.com/techchron/2012/09/25/california-affirms-legality-of-driverless-cars/

Technology never ceases to amaze me. A real gauge of innovation in American business is available in Logistics Magazine. It deals with innovative ways of moving goods around this country; By barge, shuttle, overhead rail, different from anything you are used to seeing. I was impressed with huge multinational corporations cost saving green technologies, as well.  It is economical to use alternative power and helps their bottom line.

I have a hard time finding much good to say about corporations these days. But, behind all the political mess created by Citizens United, there are regular companies, just doing their job, keeping goods moving, employing people, trying innovative ideas and working to keep America and other countries moving forward.  We have a lot to be thankful for.