ENRICHED AND MOVING FORWARD INTO 2011.

Posted on January 2, 2011 by 2gadabout
I’ve had almost continuous company since Dec. 22nd. Yesterday, my brother, Norman left, and the house was eerily quiet after a storm of activity. I plopped in a chair and read magazines for about an hour before attempting to do a thing. An article in one of those magazines was about testing stress levels. In short, it claimed that looking at pictures was the best stress reliever among a number of activities. And, of course, I’ve taken more pictures and looked at more pictures than any other year of my life. Normally, I don’t look at Jim’s blog before setting out my blog. This time, he called me, and I did. It was pictures he had taken of me. So, in turn, I’m going to post pictures I’ve taken of Jim.

He actually studies his destinations, works on smooth sailing, and reads directions-twice-before trying a new product.

He is nurturing, and caring and treasures his family and friends.

This is supposed to be a travel blog.  Choosing a life partner and a travel mate, Jim Jaillet has enriched my life as we move forward into 2011.

Posted on August 20, 2010 by 2gadabout
We arrived late in the day at Ashtabula on the 18th, with the heat. It wasn’t a friendly area of the city and we didn’t see anything of the town, just tucked into the motor home and read and did paperwork, made a few phone calls until bedtime.
In the morning we lit out for Sandusky, staying away from the interstates, following Highway 6, 2, and 24, hugging Lake Erie. Having grown up on the Great Lakes, in the Upper peninsula of Michigan, I’m familiar with them but had not traveled anywhere near the south side of Lake Erie.
First, though, we threaded our way through Cleveland. An appealing place, with a pretty skyline and home of the Cleveland Browns. 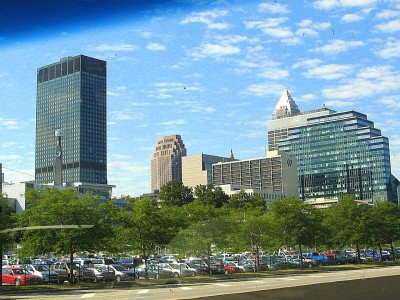 A bit of Cleveland skyline through the window. 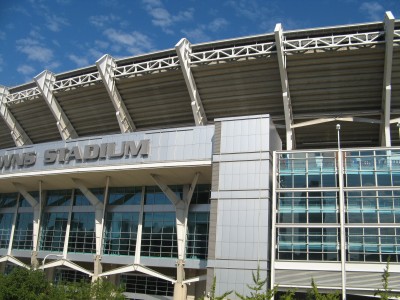 Got a passing shot at the Cleveland Browns Stadium. 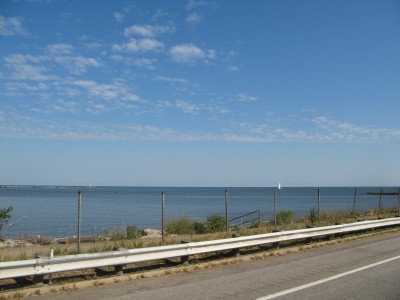 Our first good glimpse of the lake, with a barely visible lighthouse out on a point.
Leaving Cleveland, I took a number of photos of the blue, beauty. 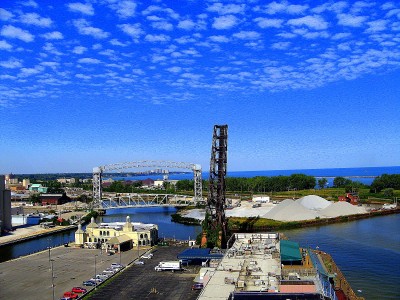 Below, the Huron River dumps into the Lake.

The drive was quite scenic, unhurried and uneventful. 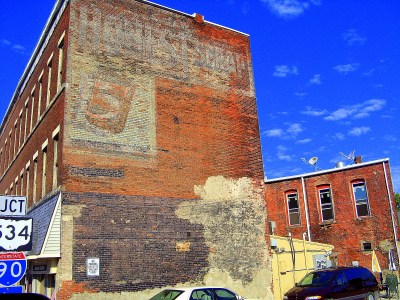 I got a skewed picture of this old building where the owner has nicely allowed an old painted ad to remain. Its says, Honest Scrap. Below, that, 5 cents. Could be a pack of cigs. Our computers no longer contain a cents sign. Not much use for it. 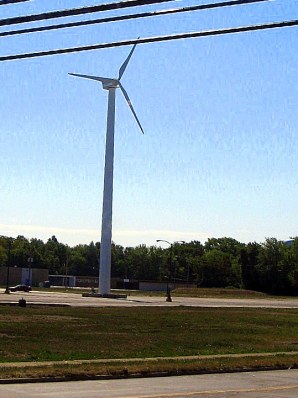 An asphalt parking lot in front of a grocery store had nary a tree, but sported instead some electrical assistance with a generating windmill. I spotted three stand alones in as many days. I wish more businesses would to that. 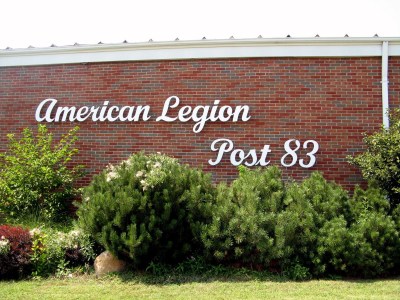 Our last stop of the day, Sandusky. The American Legion Post 83 put us up for the night in their back lot. A huge place-the third largest in the U.S. It had a great restaurant and we enjoyed a nice dinner and good draft beer. We are on our way to visit friends of Jim’s on the Detroit River for a few days.