Jim read a post on Google from a man who saw 300 whooping cranes at the Aransas Wildlife Refuge on January 14th. These birds have a wing span of seven feet and stand 5 feet tall. I saw one as a child of eight years old. My father pointed to it and said, “get a good look because they are going extinct and you’ll probably never see another one.” Then it flew with the whoop, whoop, whoop sound of its wings. Unforgettable. I’ve learned since that the whooping crane was down to 65 pairs.

There is no camping at the refuge but the small town of Austwell has a City Park with camping. On-line information said it was closed. He called the City Hall and got an answering machine and no call back. Who knows?  Maybe they are closed on Mondays. He found a private camp ground and got an answer. The woman told him, City Park is open; she charges $21 a night at her campground. The City Park was $24.  Her husband is the Mayor and also the Postmaster. (He used to be the fire chief.) We laughed and laughed. We got there and no one was around at City Park to take our money. The town  looked like poverty row, pretty vacant, with enough houses for 20 families. The sign above kind of tells the tale. We didn’t see anybody there, either.

The Wildlife Refuge, five miles from Austwell,  seems to be the major income for the town. The area on shore is slightly swampy in places, with low brush and an occasional cactus.

Texas shores tidal flats follow the terrain of the land, which is  flat and stretches  out for half a mile or more. The birds were so far away, you could only view them with your binoculars. When you take a picture, you can’t be sure what is in it. In this one, a long beaked curlew, gulls, a few ducks. Not too exciting.

Other people had better binoculars and knew their birds. We saw the ardent bird watchers with camera lenses that weigh five to seven pounds. They carry tripods as well. 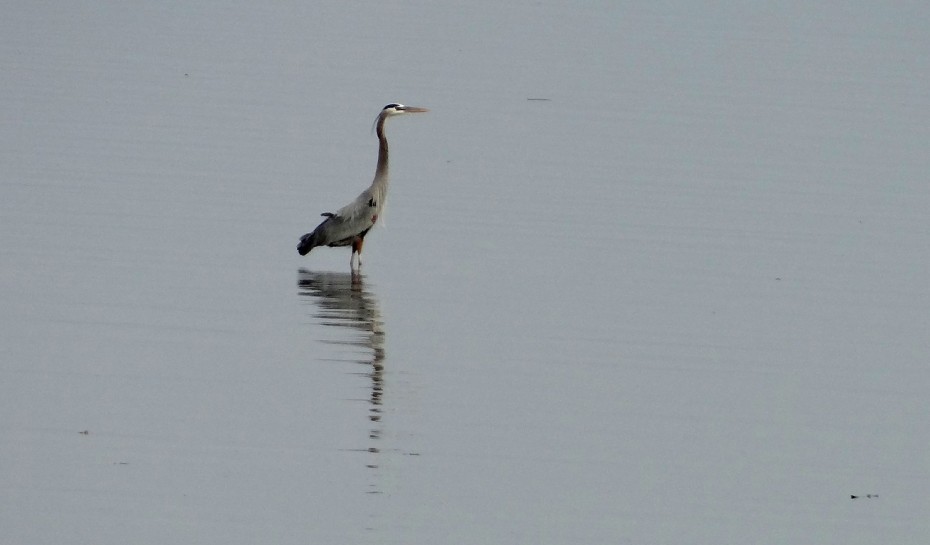 This heron was so far away, I couldn’t identify what it was. Disappointing after all the beautiful birds we saw at the National Shore at Port Aransas.

Even without the birds in sight, it was a beautiful day, and we couldn’t help but think how nice it is to be out scouting birds rather than sitting around with nothing to do. The little speck about  center-far right  in the photo is the pintail duck below. 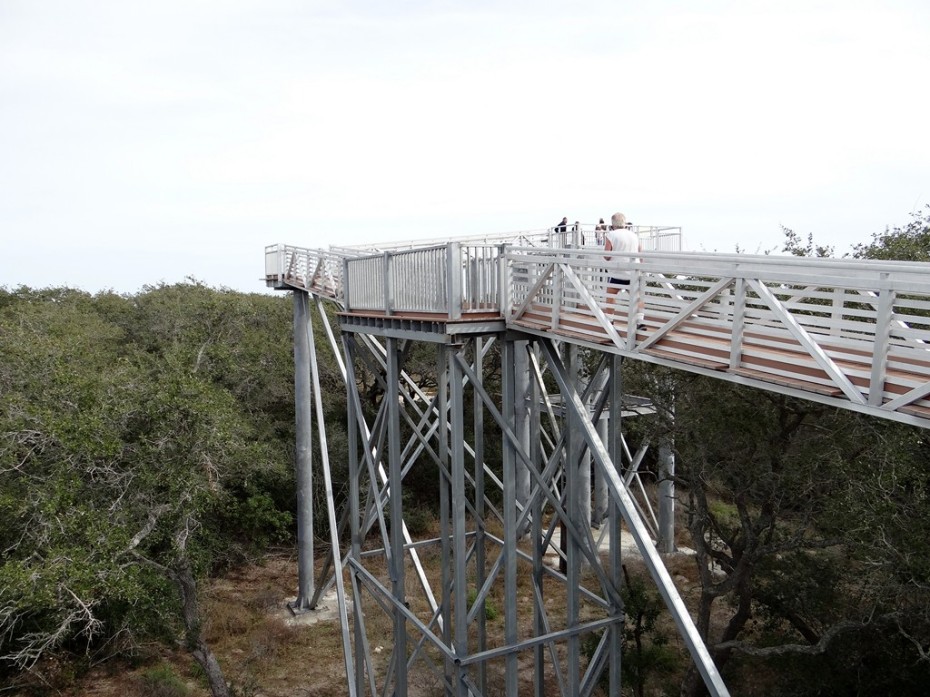 We followed a loop trail around the refuge. We climbed this huge tower which put us above the tree line. The trees are oak and stunted. The view was a pleasure, so different from home. The woods have fox, javelina, a small type of wild cat, deer and other critters. One couple reported seeing a javelina on the trail.

A  view from the tower pointing west. There is a heron sitting on a fence post that you can’t see without a binoculars.

This is what the birds look like with the camera from the tower.  Two pelicans in the background can only be identified by shape.

The visitor center is very nice, with a video and a stuffed whooping crane. They said they have three pairs in the refuge right now, but, they were hiding from all of us. No one we met on the trail had sited one.  We missed the major migration obviously. And, when we got back to Austwell, there still was no one there to take our money. So, we picked up and headed for Port Lavaca and stopped at a very friendly VFW for dinner, drinks and the night. Life is good.

One of the nice things about living on the road in parks is that birds are a constant. Treed areas, bushes, grass attracts them. Yesterday, Laurie and I walked the dogs in the early cool of the day and came upon a small park and the cheerful tune of birds. I’d forgotten how much I miss that in this harsh climate. I read the local paper and people love their town, but I find it a great place for a short visit only at this time of year.  The pool is wonderful, but it doesn’t make up for the inability to enjoy the wide open spaces and wildlife. Unless you count scorpions and lizards as wildlife.

This peacock lives in Yuma, AZ. It gets pretty hot there, too. 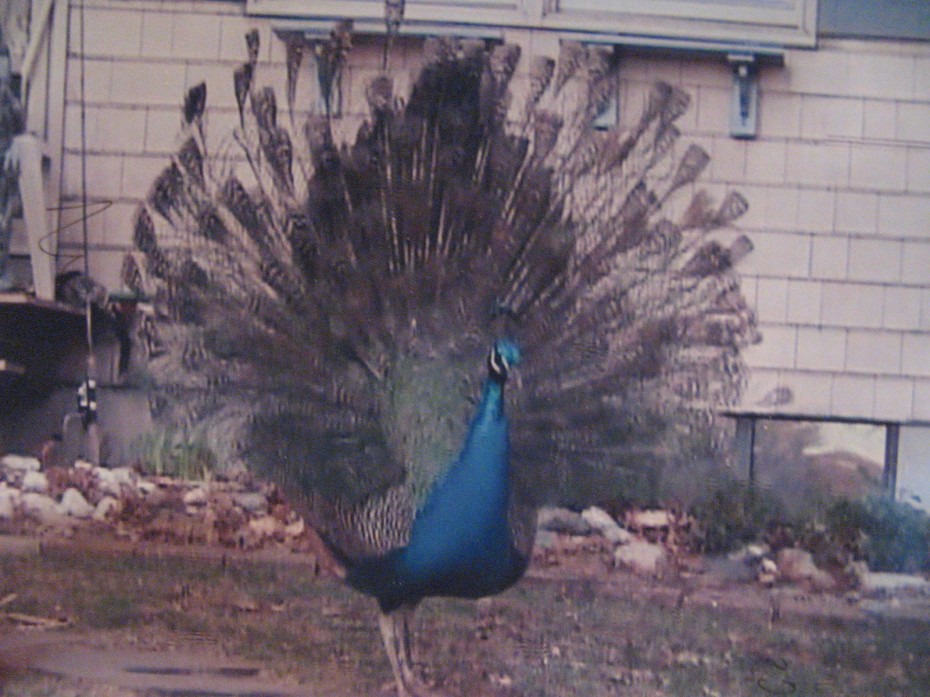 This beauty lives near a lake in Massachusetts. Seven year old grandson Austin described to me a bird he saw that looked like a turkey but with blue and green and pink feathers.

Even a common gull is an elegant bird. This one lives on Marthas Vineyard. 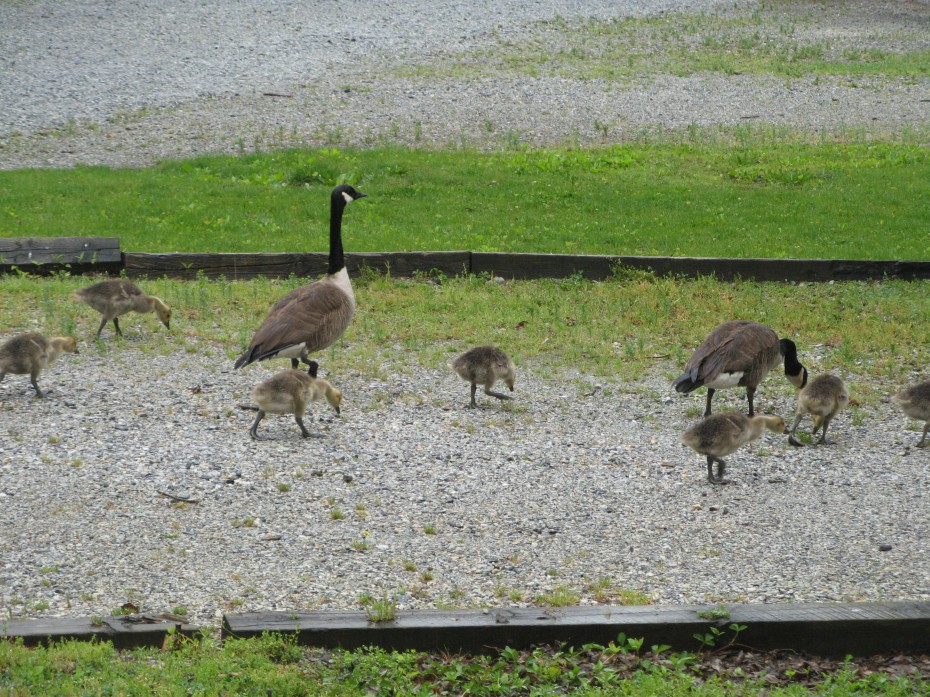 And a little songbird from Vineyard Haven.

Made me feel cooler just cruising through some bird photos. 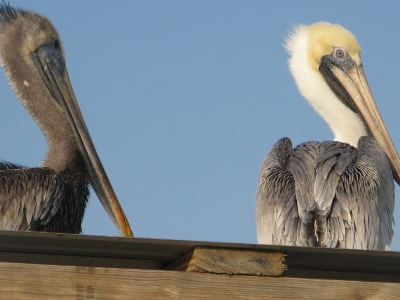 Growing up in the country gave me a deep appreciation for the critters we share the planet with. On our trip, I can’t say we viewed a lot of wildlife, but we did run into these gorgeous pelicans in Venice, LA. 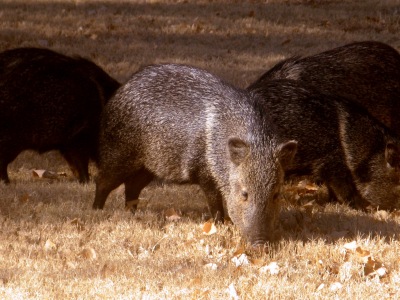 Our campsite was visited by this group of javelinas at Big Bend National Park in Texas. 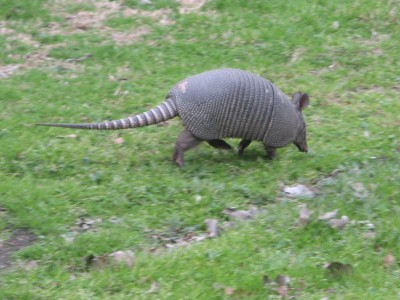 This picture was also from Jean LaFitte. Its always a thrill to see wildlife. (More on this tomorrow.)

When you take as many pictures as Jim and I do, its easy to forget where you were when. Everything wants to just rumble together. Its nice to take a day and just enjoy  pictures,  review  fun places, and  people we’ve met.

The pelican is Louisiana’s State Bird. We’ve seen a number of them. Aren’t hey magnificent creatures? These were taken at an unforgettable place, too. Venice, our hop off place to Pilot Town, and the coldest boat ride I’ve ever had. I chuckle every time I think of it.

From childhood, trees have had an affect on me. I enjoyed climbing them, enjoyed the woods and watched my Dad log and cut pulp. Logging was a fascinating and exciting time in the past. Now I’m a tree hugger. Louisianans revere their trees, though lamenting cutting down all the cypress. Here are some beauties.

Judy Tiner was an interesting neighbor in Opelousas. She was the first woman to work and Oil rig. She stayed with it for 25 years. Now she has a broken neck and was forced to retire. A strong woman with great stories to tell. I’m hoping to interview her by phone and share some of them with you.

And Greg Guirard. He had great stories to tell when we met him and after reading two of his books, I want to hear more.
As I cast about through my albums, I realized I don’t take enough portraits.  I should have taken better pictures of the people I meet.
Categories: Uncategorized | Tags: beauty, Greg Guirard, Judy Tiner, Louisiana State Bird, Pelicans, photography, travel, Trees | Leave a comment