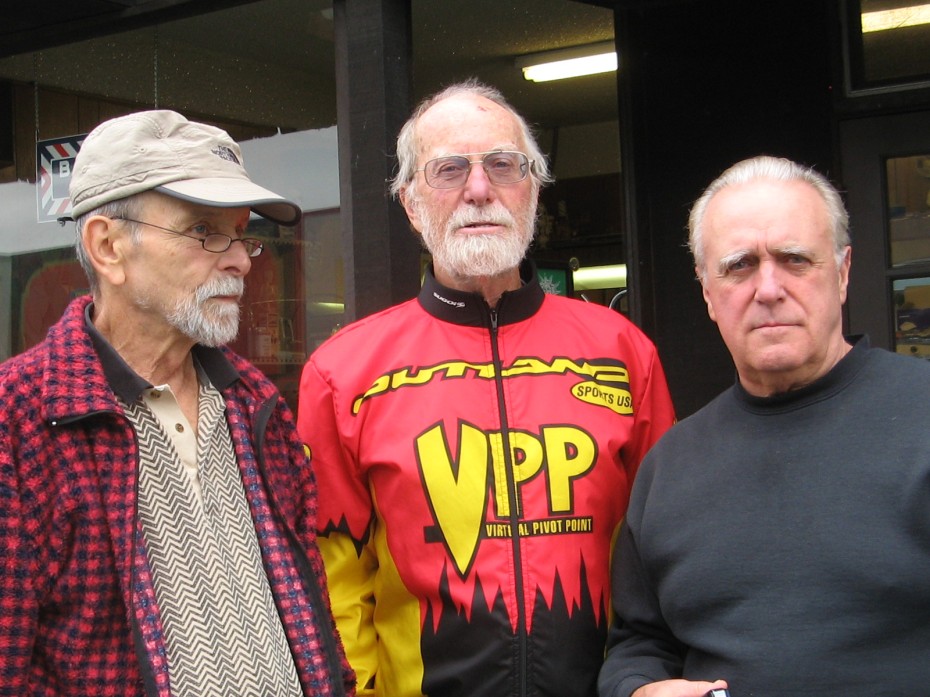 How many people can you fit into a Henry J?  Fourteen, if you are a teenager from the 1950’s. Jim and his school chum Al Penta spent time reminiscing about their high school antics for an hour over lunch. Al, in the biking costume, brought along his friend, Ed.  As we parted, Al told us about the Vaux’s (rhymes  with foxes) migration going on. 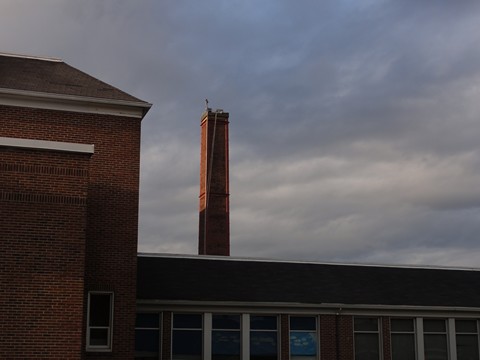 At dusk, we drove back to town and situated ourselves at the Frank Wagner Elementary School to watch thousands of Vaux’s Swifts get ready for bed. The second largest congregation of Swifts in North America have chosen this four foot square chimney to spend their nights. 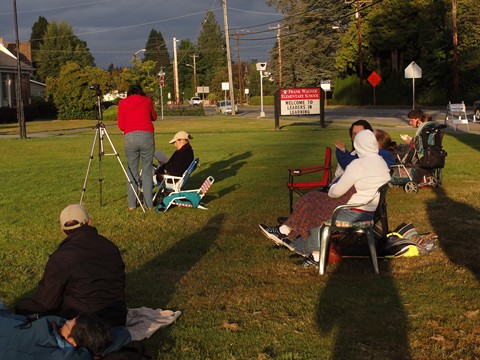 Before the birds began their nighttime action, people gathered on the school lawn with their cameras and chairs. Peak time was Sept 2nd when 3455 swifts settled  into the chimney. The school has a camera mounted on the chimney and a monitor in a window where you can watch them snuggling in. 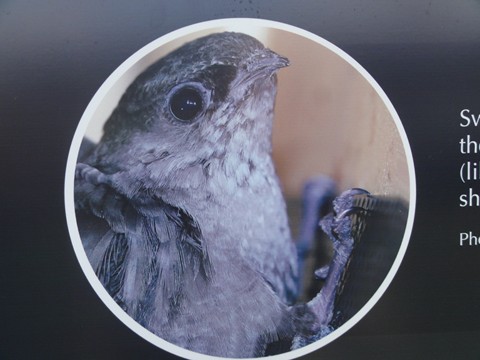 Swifts do not perch. They dig their claws into rough surfaces and cling. In a chosen chimney or hollow tree, they pack in like shingles,overlapping each other for warmth. 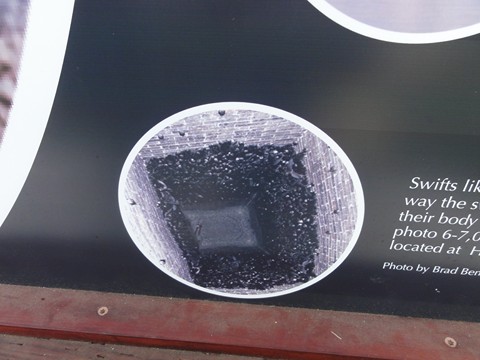 The school and Pilchuck Audubon Society supplied brochures, a story board  and docents to answer questions from watchers. 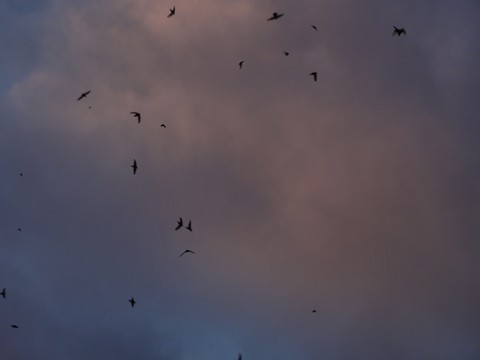 They began gathering near the chimney before dark, still darting about snapping up mosquitoes. The swifts  are leading their young from north-western Canada and Washington, to Central America and Venezuela. 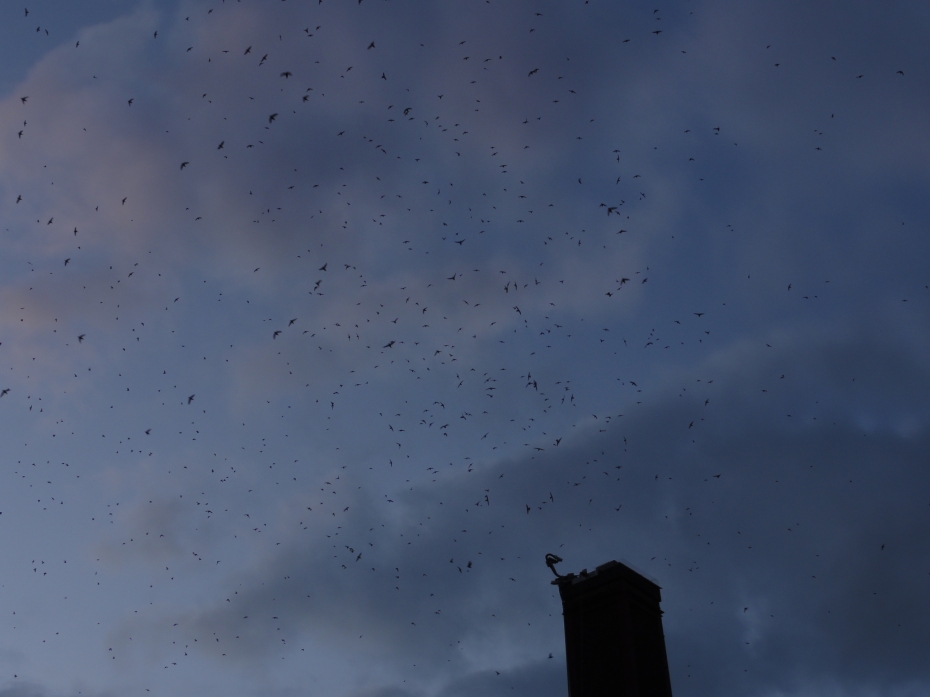 Soon thousands of them were performing aerial maneuvers, mostly darting and circling, and re-circling. It makes you wonder how they can recognize their mates and young. 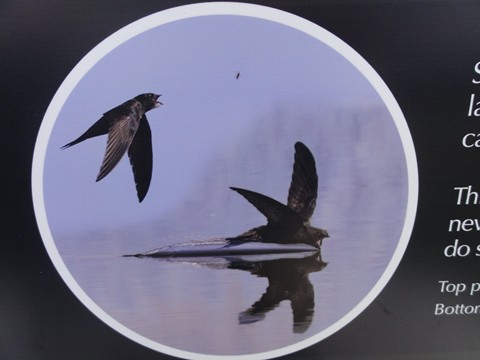 Vaux’s forage, eat, drink mate, court, and collect nesting materials while in flight. The picture showing a drinking swift gives you a clue why they like this area with its river and swampy mosquito breeding areas. 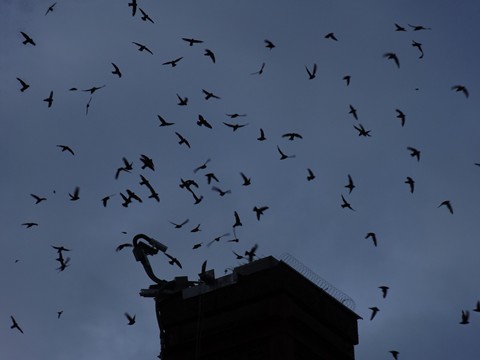 No one knows what signal begins their actual plunge into their chosen roosting spot. They move so swiftly, hence the name, you can barely see them enter, just a flutter of wings, then another circling as a new batch gathers for the plunge. 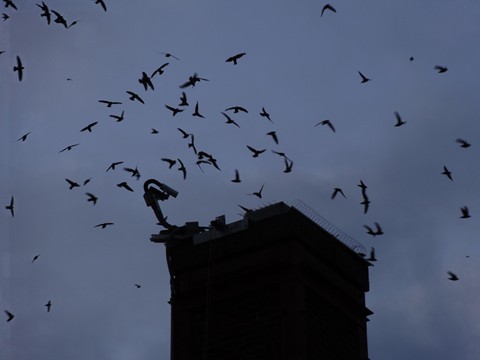 The numbers begin to thin. Sometimes they circle in one direction, then switch to another direction. They enter head first, then tail first. It seems peculiar, but they obviously know how to get into a small space. The birds are 4 to 5 inches long. At night they slow their metabolism to a near dormant state to conserve energy while sleeping. 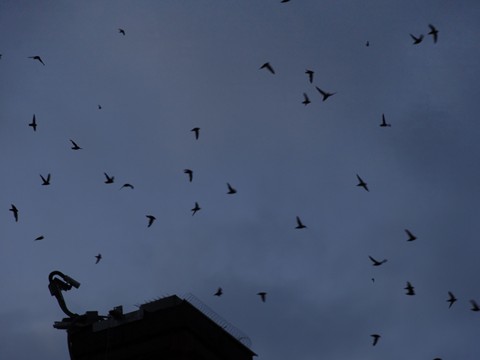 We didn’t stay until the last swift disappeared down the chimney, but the docent told us that one night 3 single birds circled and circled as though they couldn’t find room at the inn. When they finally flew into the chimney, the crowd applauded. By the time we left, there were about fifty people watching.  The cumulative  count, as of Sept. 10th, was 33,546 .  Nature always provides a fascinating spectacle.

ON THE MOVE AGAIN

Yesterday, we left  Mt. Vernon Thousand Trails for the second time.  It was raining slightly, but, even so,  the weather was just beginning to warm up in what we would have to consider a cool summer. After  many years without swimming I had worked my self up to five laps in their Olympic sized pool, and without so much as a warning, they closed it for the season. 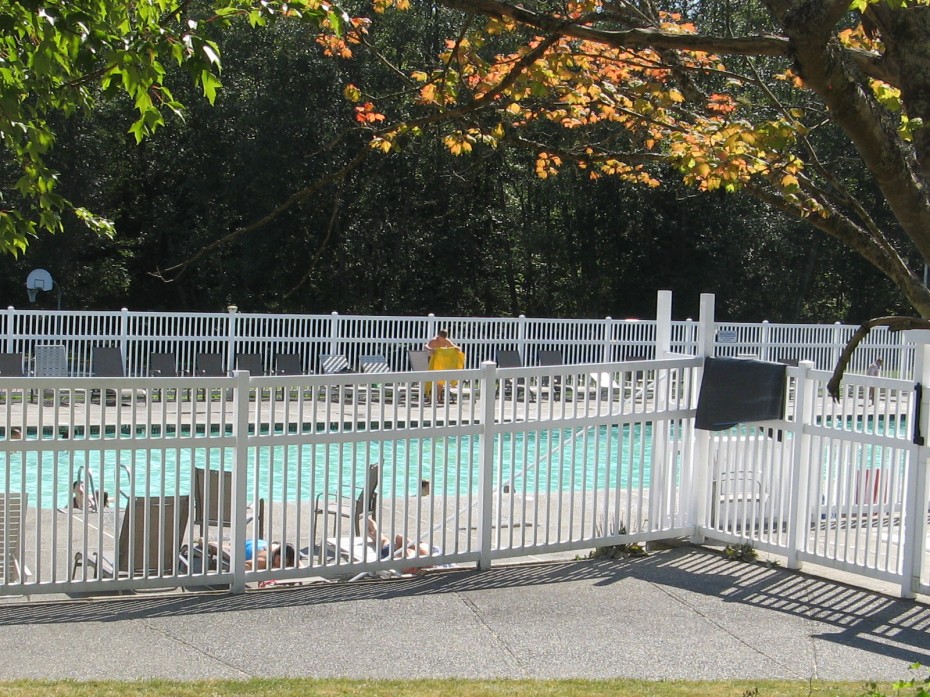 Its beautiful enough to have your wedding here.  Last weekend,  I happened to catch an unknown bride and groom having their pictures taken on the lawn above the pool. A flowered arch and chairs were set up in the meadow for the ceremony. The lodge was reserved for the reception. 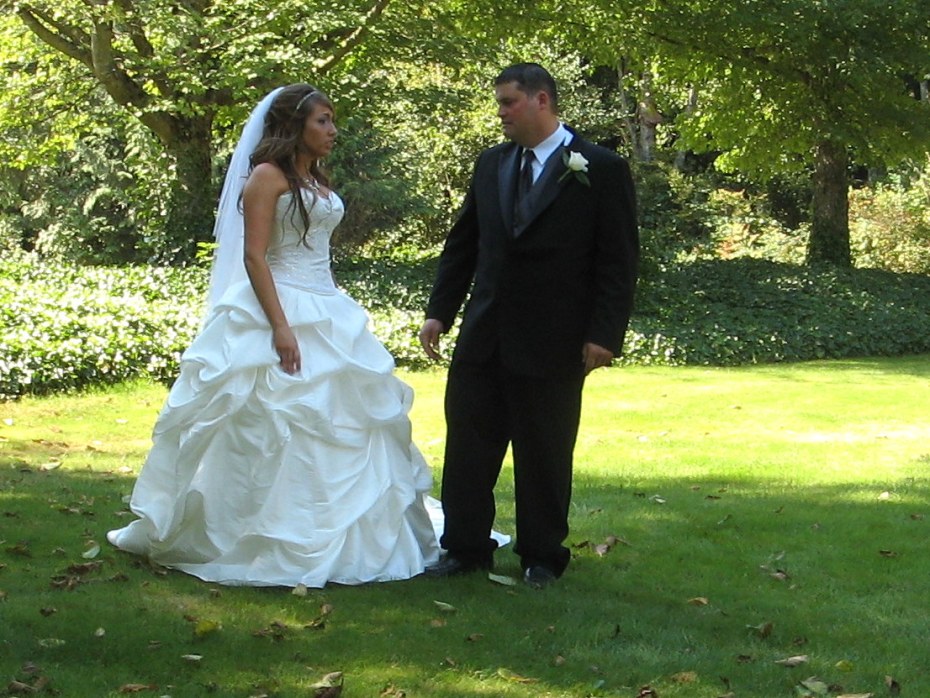 Besides the pool, the deep woods to walk through, has made this a very pleasant stay and one of my favorite parks. 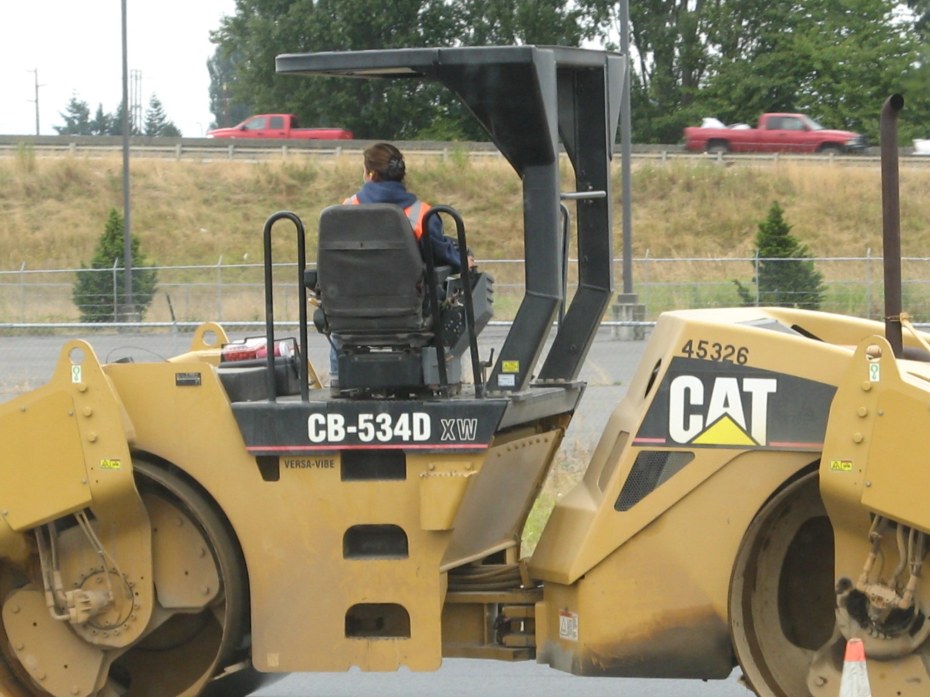 On the way to Monroe, we stopped to buy a special LED light bulb and got waylaid by road work in progress.  The  road crew of 15 people had six men, the rest were women.  What a hoot watching women drive steam rollers, water trucks, and other heavy equipment. 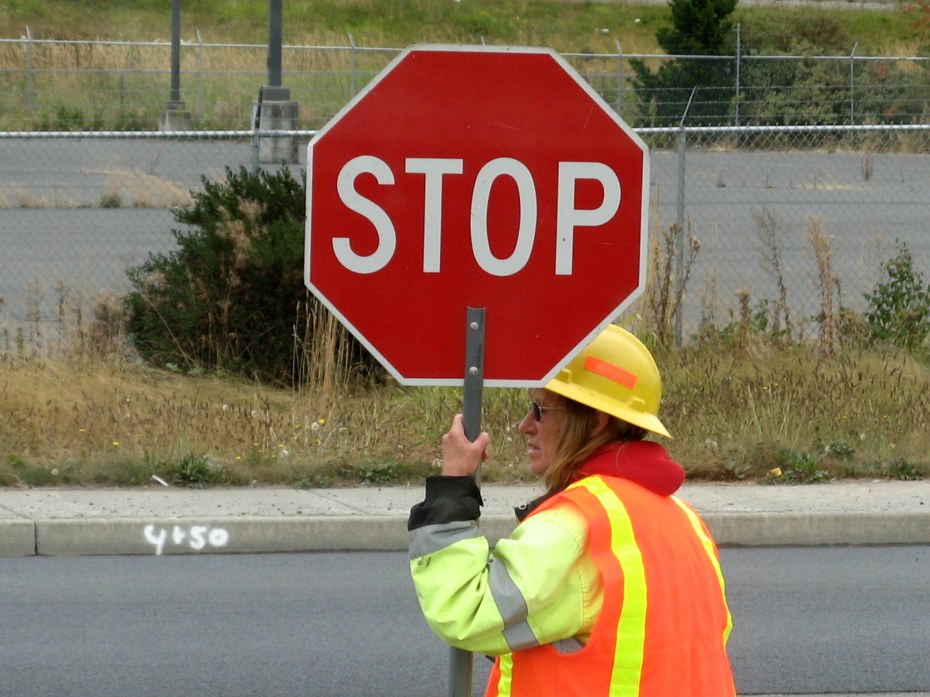 Normally, a road crew has one or two token women, and they are relegated to traffic controllers.

We settled into Monroe Thunderbird snuggled next to the Skykomish River. Jim is an Eagle and suggested we go to Sultan for Taco Tuesday. 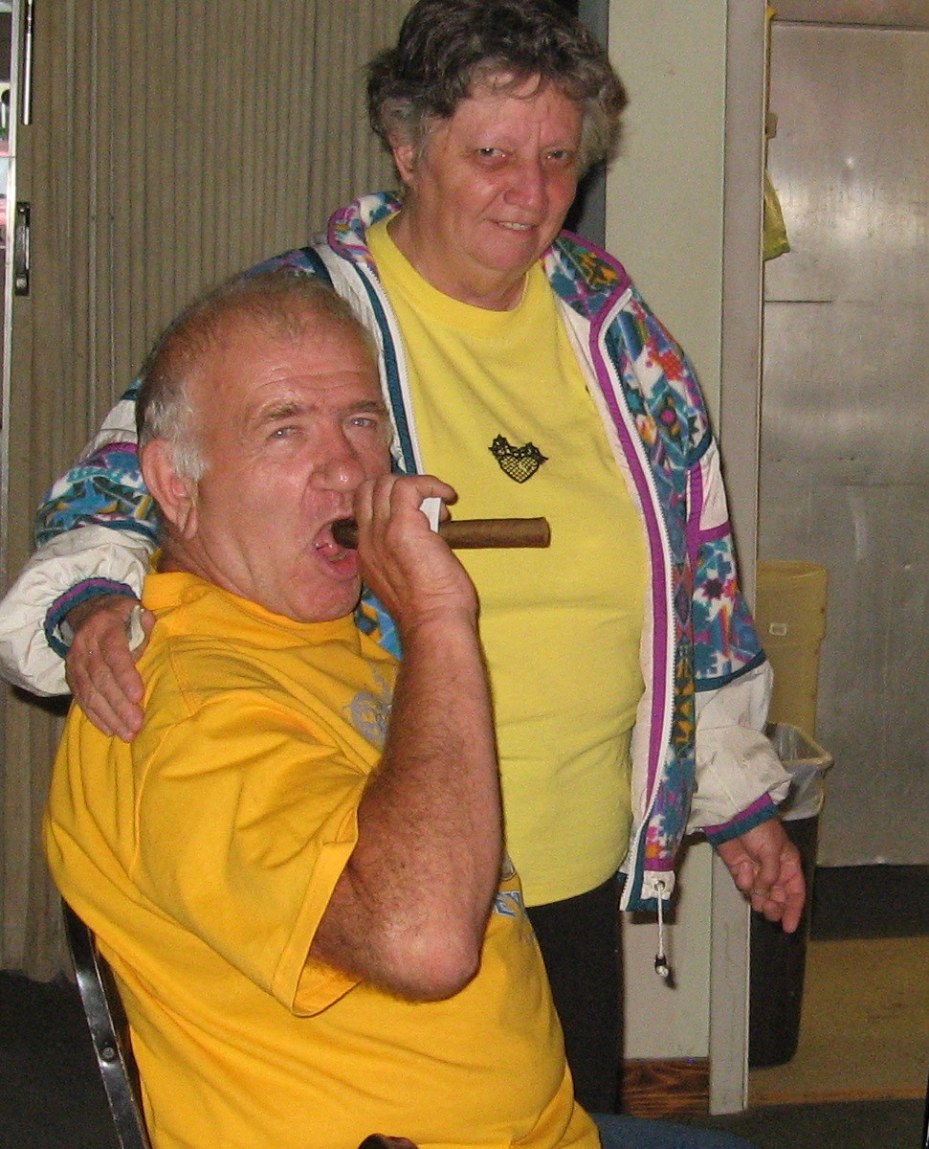 We met Jerry who introduces his wife as his bride, Karen. He quit smoking and hasn’t lit his cigar in over 30 years.  He just chews on it a bit, obviously with great pleasure. 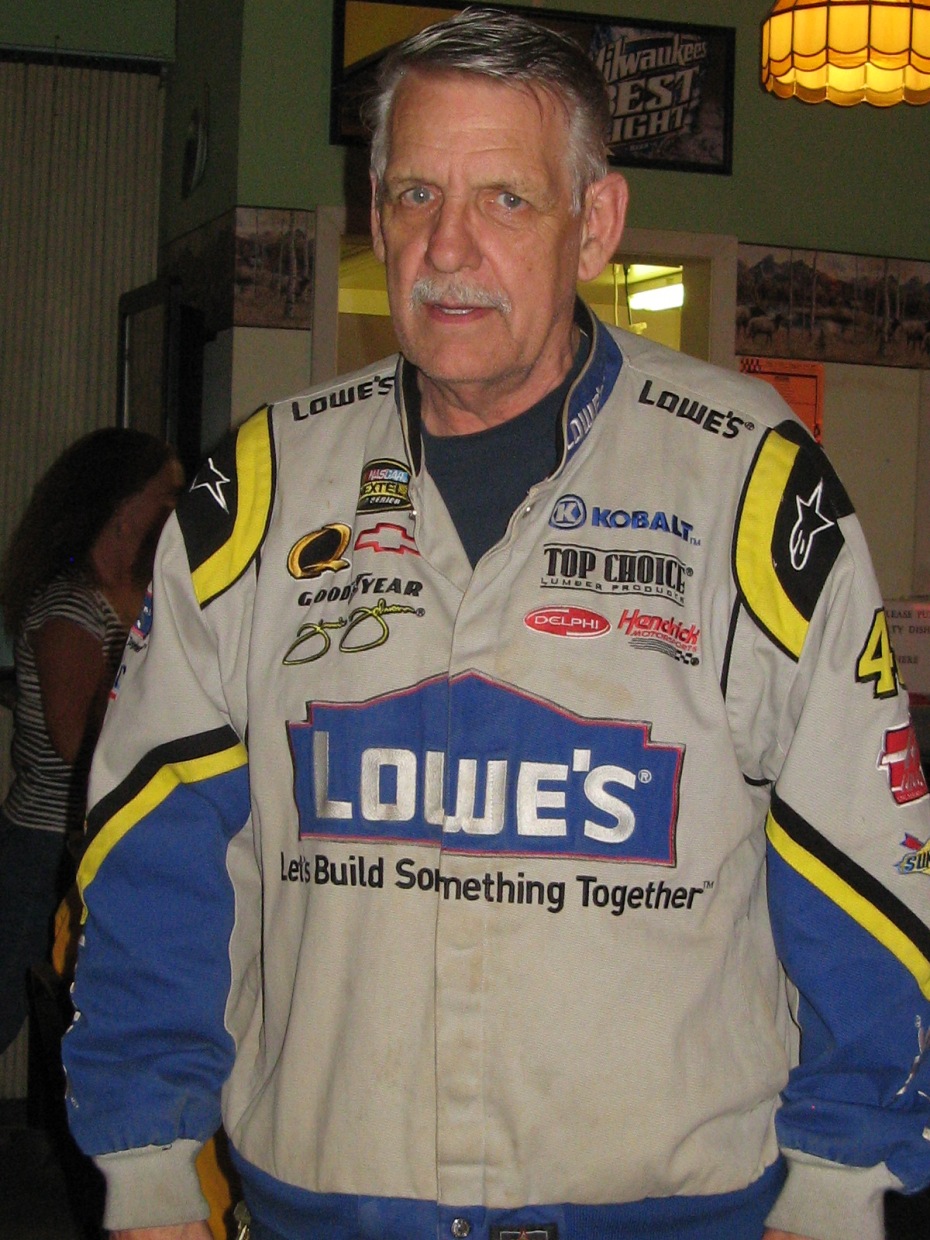 And Chief Mike, a career cop. He worked P.D.’s and the Sheriffs Department in the area and ended his career as  Chief of Police of Gold Bar,WA.;  a long time Eagle, race car builder and driver. The colorful racing jacket belonged to a  friend of his,  Jimmy Johnson.

Most of the fraternal clubs have standard beer, but this one had a craft brew, Manny’s Amber Ale, good and bitter.  Mike bought us a beer and we went home happier than we should have.  Back at Thunderbird,  I discovered their pool is still open. 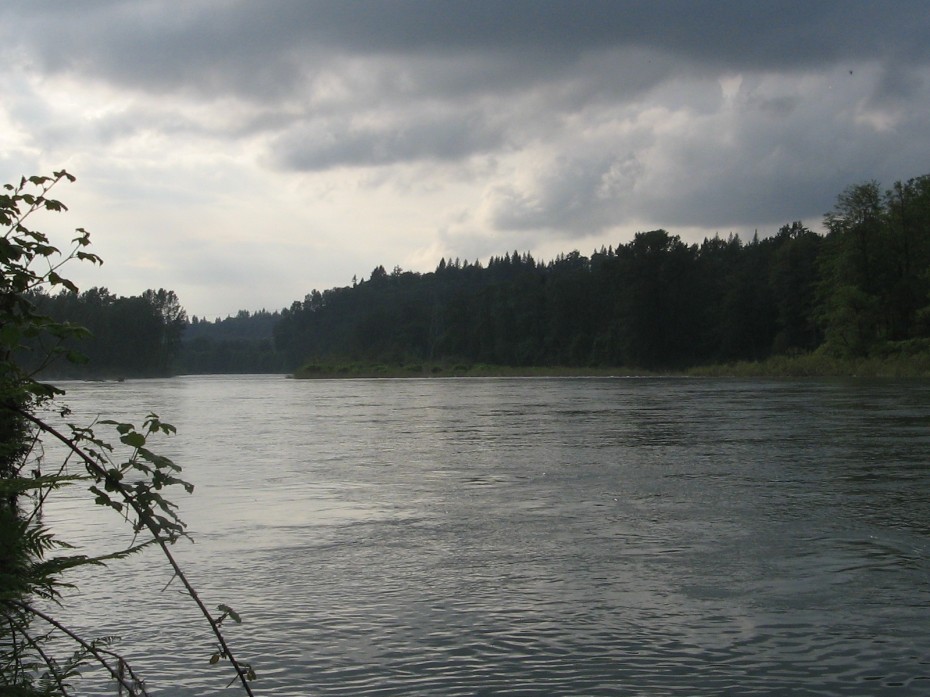 Located on a country road, set on the Snohomish River, seven miles from the town of Monroe, is Thunderbird Thousand Trails Resort. Foreboding clouds, spritzer rain, and cold, in contrast to our last stay here in July of 2009 when I couldn’t get enough of the beauty of this river. I must have snapped 30 pictures of melting sunsets. Where went summer? 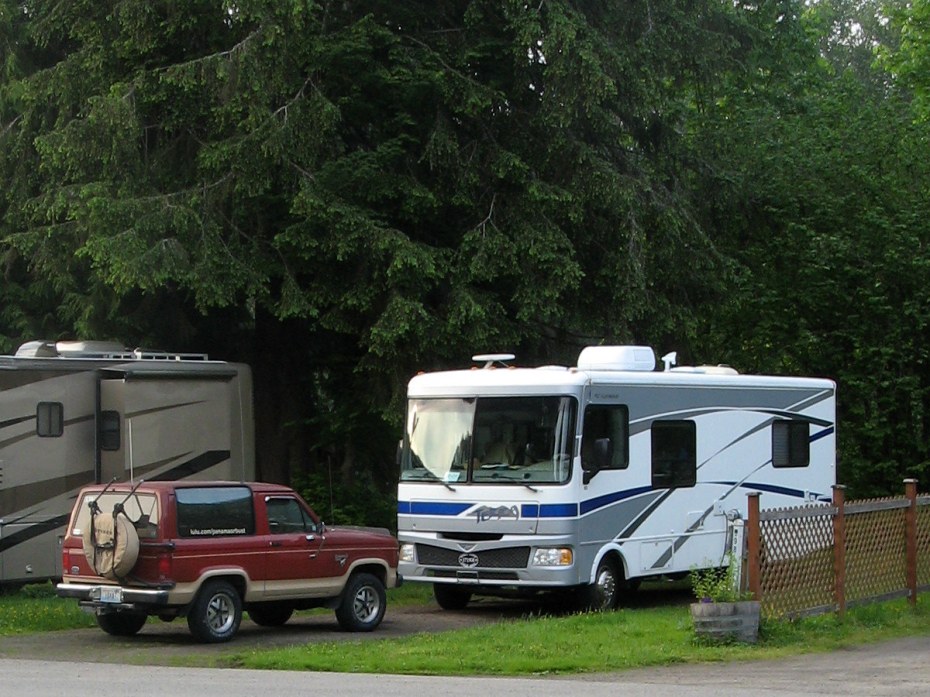 We managed to get the exact same spot we had in 2009, near the laundry, on the river side of the resort.  We spent the morning doing household chores and didn’t get out to walk  until after dinner walk. The weather cleared, some, but summer still seems far away. Jim always comes to Monroe to catch up with friends, Mike and Vicki Coleman.  Mike is a mechanic and looks after the Bronco. Jim sold his old Bronco from this spot and had the “new” out fitted  as his “toad” that  July.  Jim’s  grammar/high school pal, Al Penta,  lives in Monroe. An avid cyclist, Al  bikes about 20 miles every morning and speeds right by the resort. Too early for us, however, and we get up at five a.m. 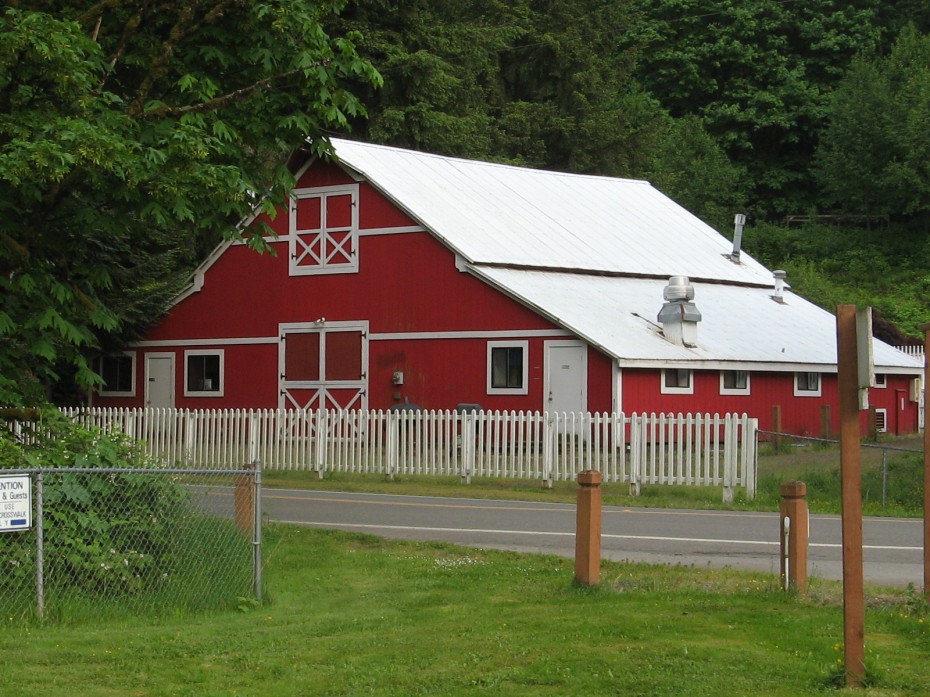 Across the road from us is the Family Lodge for the resort. 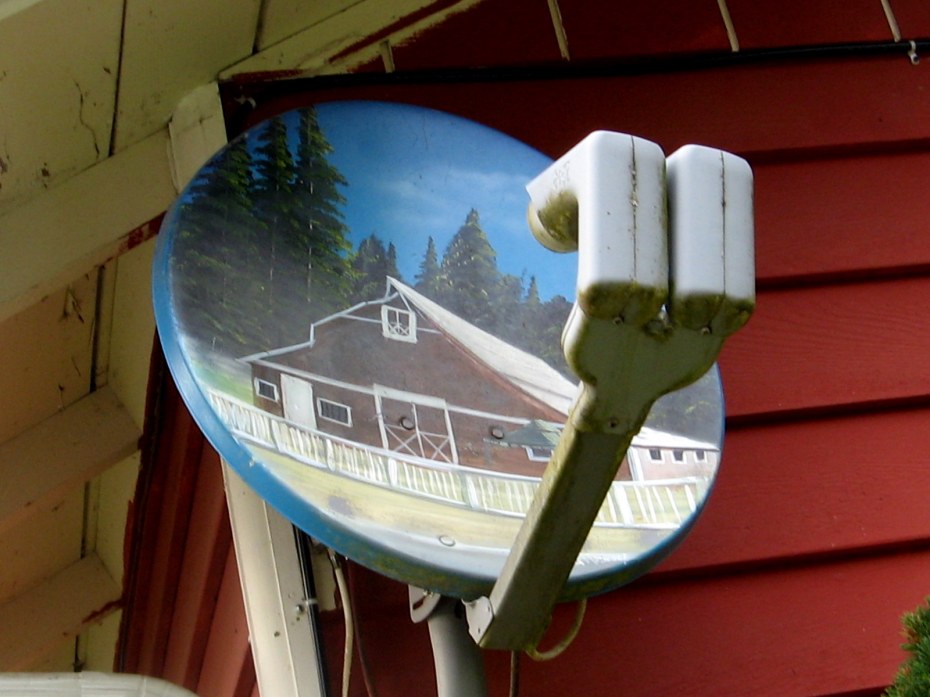 Someone painted a decent rendition of it on the TV dish at the Adult Lodge. 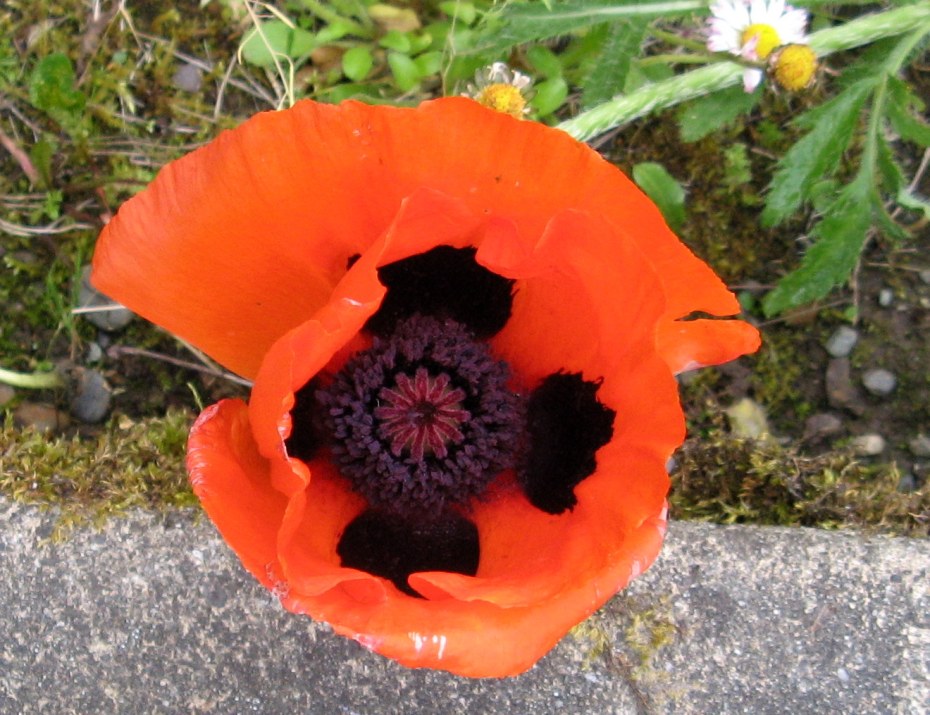 The grounds are beautifully landscaped, hilly, and cover about ten acres. This poppy is the size of a small cabbage. 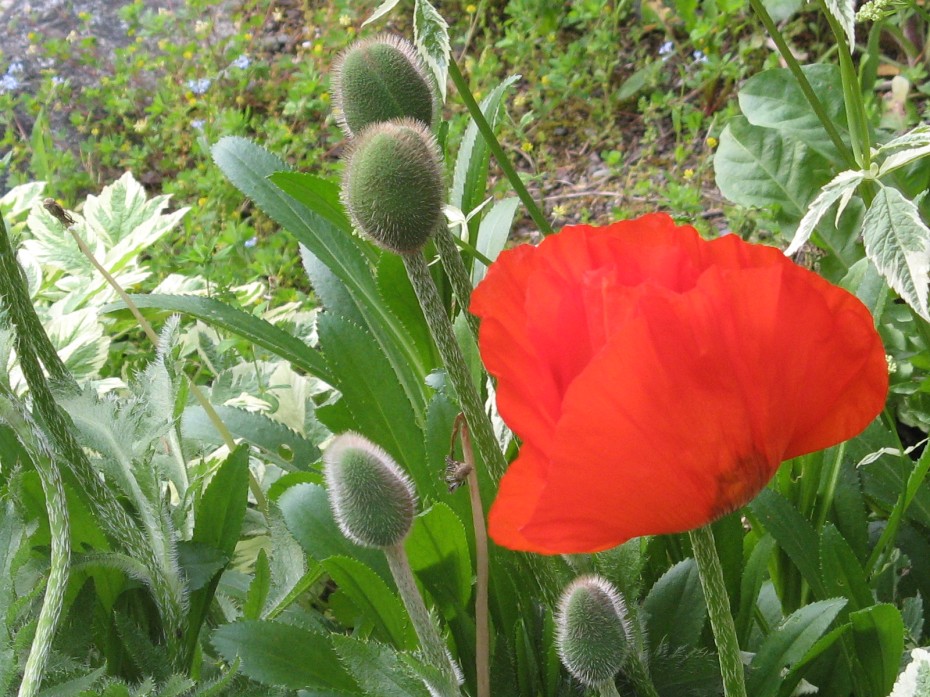 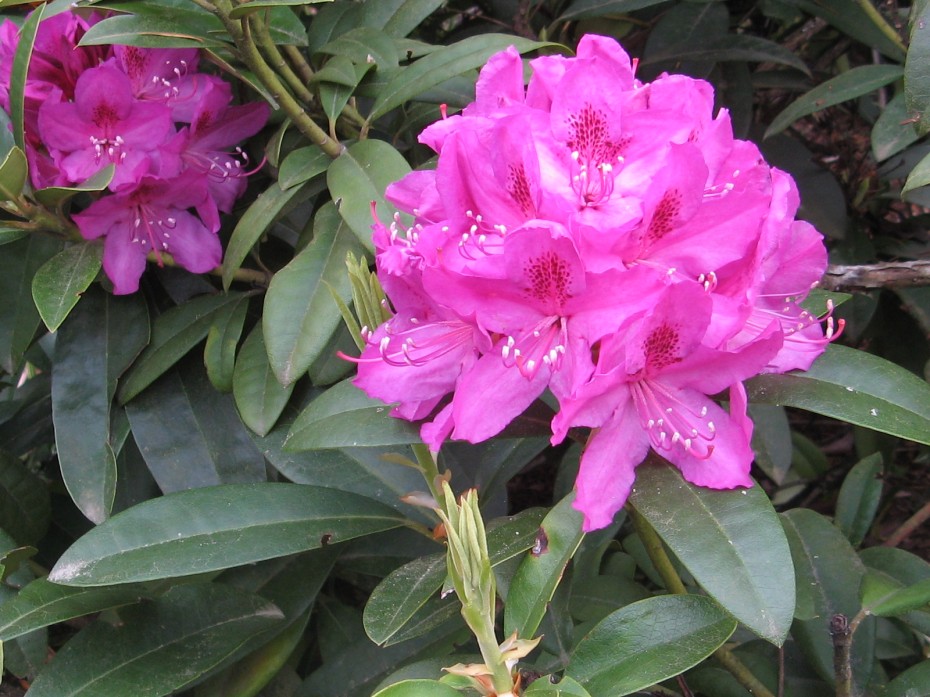 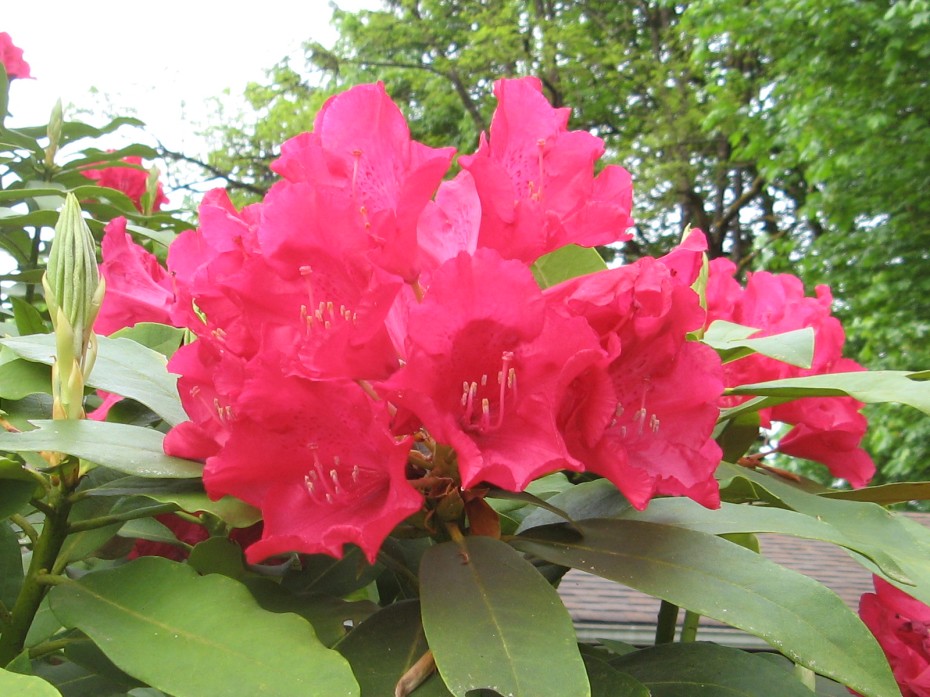 I’ll be making good use of the pool and hot tub here, before I leave for California on Monday.  I know the weather will clear and be sweet and sunny when I leave.  It’s Murphy’s law! 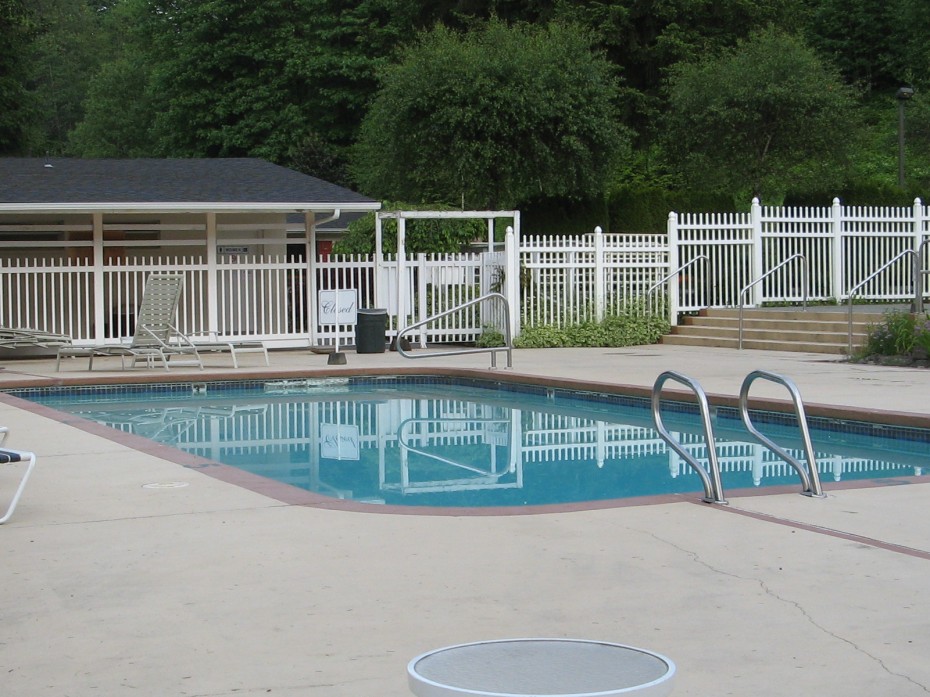