Into all lives some rain must fall. Or, more accurately, we hadda problem. Spent all morning, and then lunchtime, and then… Suffice it to say we spent most of the day hanging out at Five Star International in Allentown because an engine warning  light blinked on signaling an engine problem. It was a problem we were glad to have taken care of and fixed by a very competent mechanic, and nice people at Five Star. Not terribly serious, but good maintenance pays off. You can see they do buses and trucks and that is what we are in a sense, a truck. 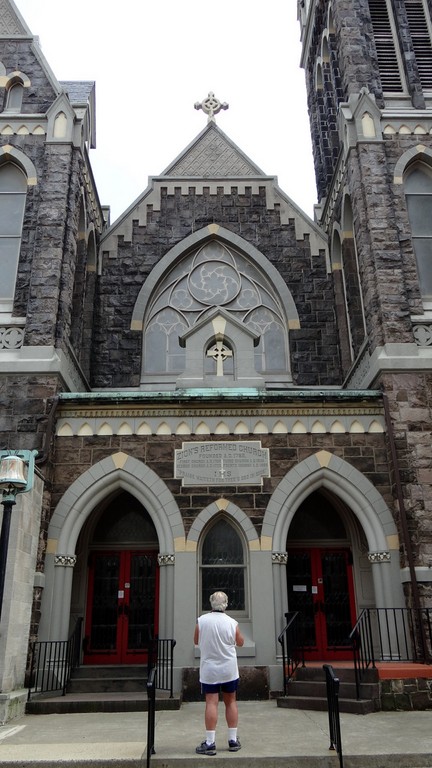 We had enough time to visit the Liberty Bell Museum of Allentown, housed in Zions United Church of Christ. I visited the Liberty Bell in Philadelphia sometime in the 1970’s and had no idea this church hid the Liberty Bell, and a slew of other bells, from British Occupation. A conquering army is want to melt down bells and turn them into cannon; victor and spoils. 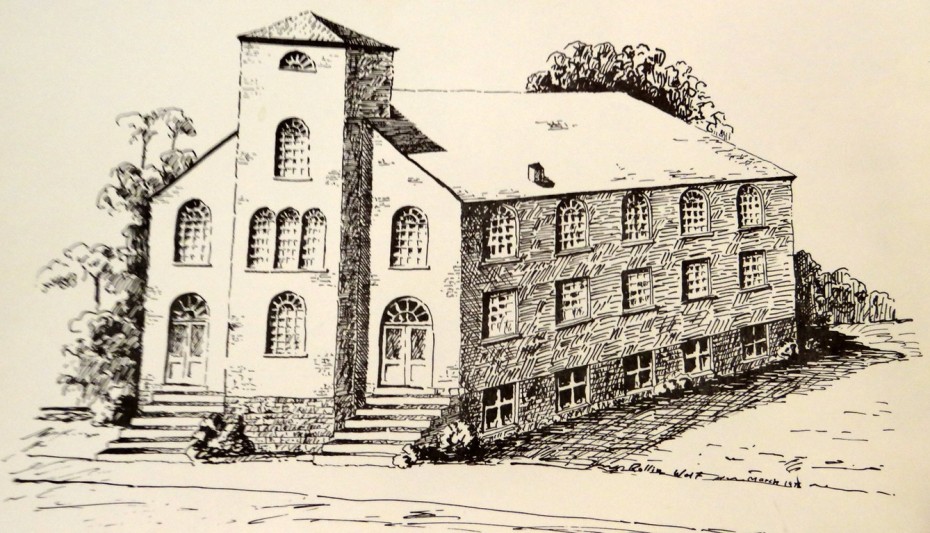 The original church was built in 1702 and replaced with the second church, Zion’s Reformed Church, which hid the bells from 1777 to 1778. That church was again replaced by the current stone church

And, of course, the wonderful story is displayed here. In 1961, a man named Morgan thought the hiding of the Liberty Bell should be recognized and suggested the Church as a shrine. He knew, that 51 replica Liberty Bells were made, one for each state, and one for President Truman’s Library. Why not place an exact replica in the basement of the church and honor their history? Exact replica meaning, 2080 pounds, clapper 44 pounds, yoke from which it hangs, 200 pounds, but without the crack. 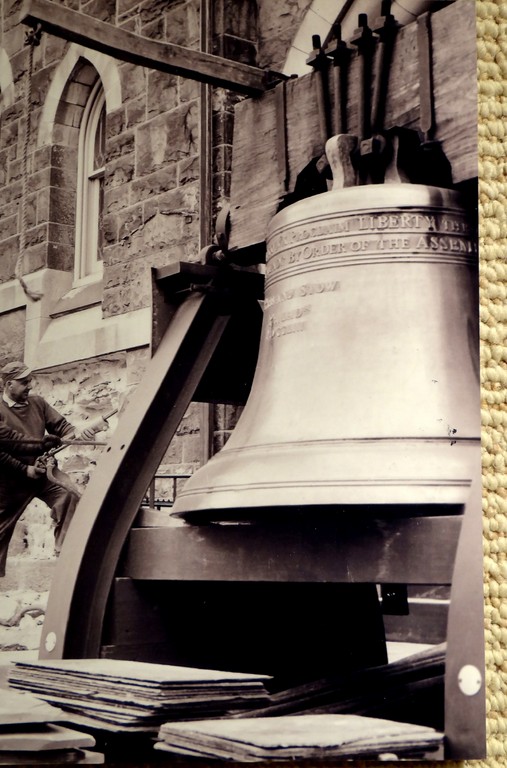 When all was done and arranged, they actually had to tear into the church to get it into the building, removing slate and rock, then patching it up.

It came on a train car and thousands of people stood in the rain to see it come. One hundred thousand people visited the new museum the first year it was open. 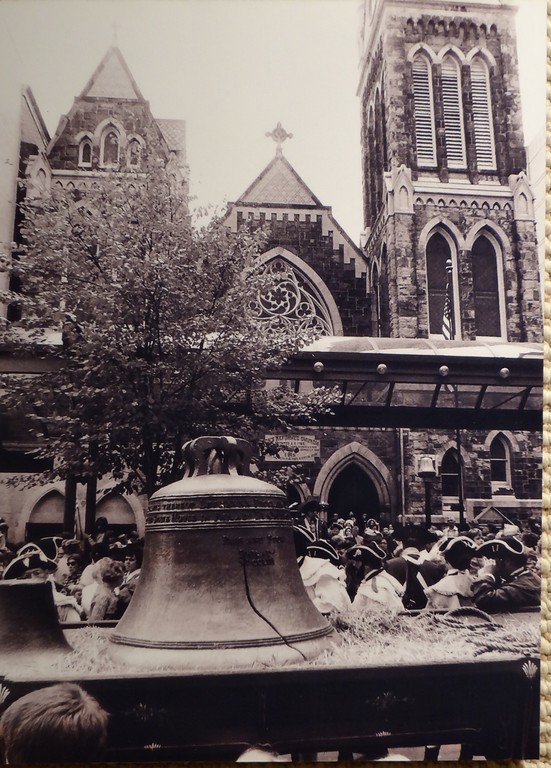 Last year, a fiberglass replica, re-enacted the bell coming to town honoring 50 years on display. But the real story of the bell I had never heard.

There you have it. And, again, the bell was invoked with liberty by Martin Luther King in  a famous speech a year after the bell was dedicated in Zion Church.

You can click on this photo to make it larger.

The docent encourages visitors to ring the bell. I used a rubber mallet, Jim pulled the 44 pound clapper with a special tool.

The bell is a powerful image of our nation’s freedom. Henry Ford stood beside the real Liberty Bell before it was enclosed in a glass case. People from all over the world  liked to have their picture taken with it and touch it.

The story of how the bells got to the church, in wagons, 180 of them, with the bells hidden under manure and straw,  is shown in a mural in the huge basement. 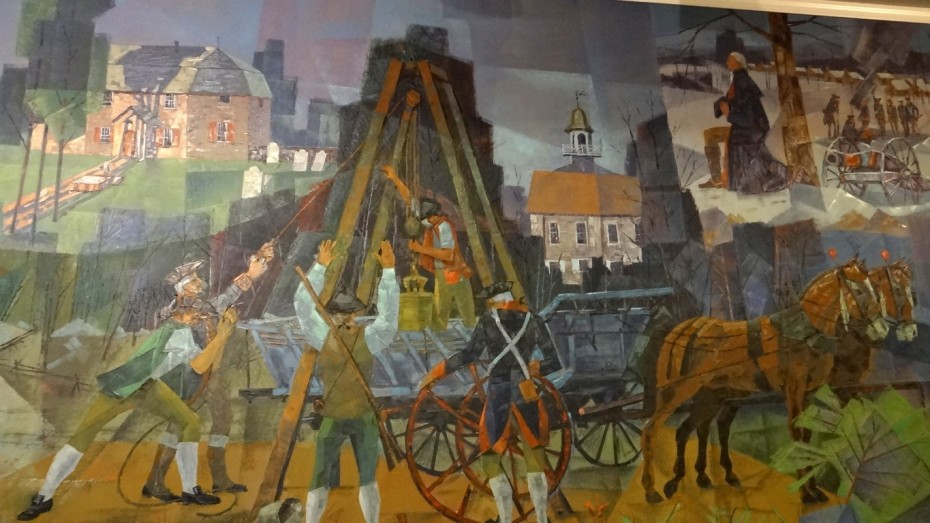 The liberty bell was the heaviest, and the wagon broke a wheel and it had to be transferred to another wagon before they reached the church. All of this was done in secret lest the enemy learn the bells hiding place. Not even the local citizens knew the bells were hidden. I’m now curious about all of those replica’s. Where are they?

The museum makes a nice visit when you are in Allentown. It’s free.  It holds a lot of documents or replicas of famous documents, and one real artifact, a piece of the wagon that carried the bell was kept and donated to the museum.

Posted on March 25, 2011 by 2gadabout
I have two grandson’s graduating high school this year. I had established for each of my grand kids when they were young, an educational account in mutual funds that can be drawn upon when the kids reach college age. Something manageable, putting a little bit of money aside as they were growing up. They can draw on them only for college or vocational or other accredited schools. It can be used to pay for tuition, books and a defined number of other college related expenses without having to pay taxes on the earnings. A sound idea. If they had graduated in 2010, everything would have been fine. But, its 2011.  Our wonderful congress has slipped in a little grabber. Van Guard wrote me a letter informing me they will no longer be accepting new educational accounts. Van Guard suggested I should change them to another type of account, a 526, whatever that is. The other fund companies just gave me the bad news.  It seems congress has decided taxes must now be paid on the earnings these accounts made when they are withdrawn.

Gee, our wonderful congress has to balance the budget and reduce the deficit. Did you notice when the government investigation report of the banking and mortgage failure came out, it concluded there are guilty parties and the whole melt down was preventable and that laws were broken? Did you notice not one congress person decided we should go after the guilty parties and hold them accountable? No one was fined for slurping up billions of illegally gained dollars at taxpayers expense?  But, shucks, lets to go after those juicy educational accounts that are benefiting our students now that the economy of the world was affected negatively by these bozos and we are buried in debt, and trying to crawl out of it.

It makes me so angry I want to reiterate that old saw- THROW THE BUMS OUT.
House rules should dictate that every congress person should have to publically declare who gave them or their campaign committee money, or any promises, or deals made concerning the passing of a bill, while connected to a lie detector, before they are allowed to vote. This is not the type of ugliness any of us imagined could happen in America. Its so sad.

Preventable, that’s what gets me. This mess was preventable.