We leave Kunming on the bus headed for Guilin. On the way we stop at a poor Suni Yi village that  still functions much like it has for hundreds of years. It has been insulated from tourists until recently when the village and its cemetery were designated a UNESCO site.

Most of the houses are ramshackle. Some have tin roofs, some have straw. Some keep pigs next to their houses.

Raw sewage runs into a ditch down the street; garbage is strewn on the ground everywhere.  You understand very quickly what life was like, and still is,  for some ethnic minorities in China.

The Suni Yi believe spider webs are good luck and they don’t remove them from doorways, alleys or houses.

The women work together to remove corn from the cobs. The crop is shared among the families. It appears to be the major crop in this area. Front right is the village adobe mixer.

They have many uses for the fibrous husks and don’t throw them out.

Clearly visible on this building, the many layers of time. On the right, is a slap dash repair. The center is from an earlier time. Above and on the left are different materials.

Here, too, you can see the different style of adobe bricks and stucco that went into repairs over the years.

Like all Chinese, they adore their children. During the enforced one child per family policy ethnic minority people are allowed two children per family. The Chinese government enforces this with ostracism. An unregistered child is shunned by neighbors; he cannot get work as an adult, no one is allowed to hire him.  His parents also suffer; they lose jobs and get punished in many, small ways. Farm people didn’t exactly have “jobs” like city people before collective farming. And now, collective farming  has been discontinued.   At one time they gave out free condoms and demonstrated them by showing how to use them by slipping  them on their fingers. So the farmers put the condoms on fence posts, tree branches and anything but their privates thinking they would work.

The people here are not used to big noses parading through their village and they are a bit shy. Vicki asked us not to give them money and turn them into beggars. But, you can see the dollar bill in this little boys hand. One of our group “forgot”.  It won’t be long before tourism will negatively and positively affect their  lives.

We barely give the above ground  cemetery a passing glance. It is unkempt and overgrown with weeds. 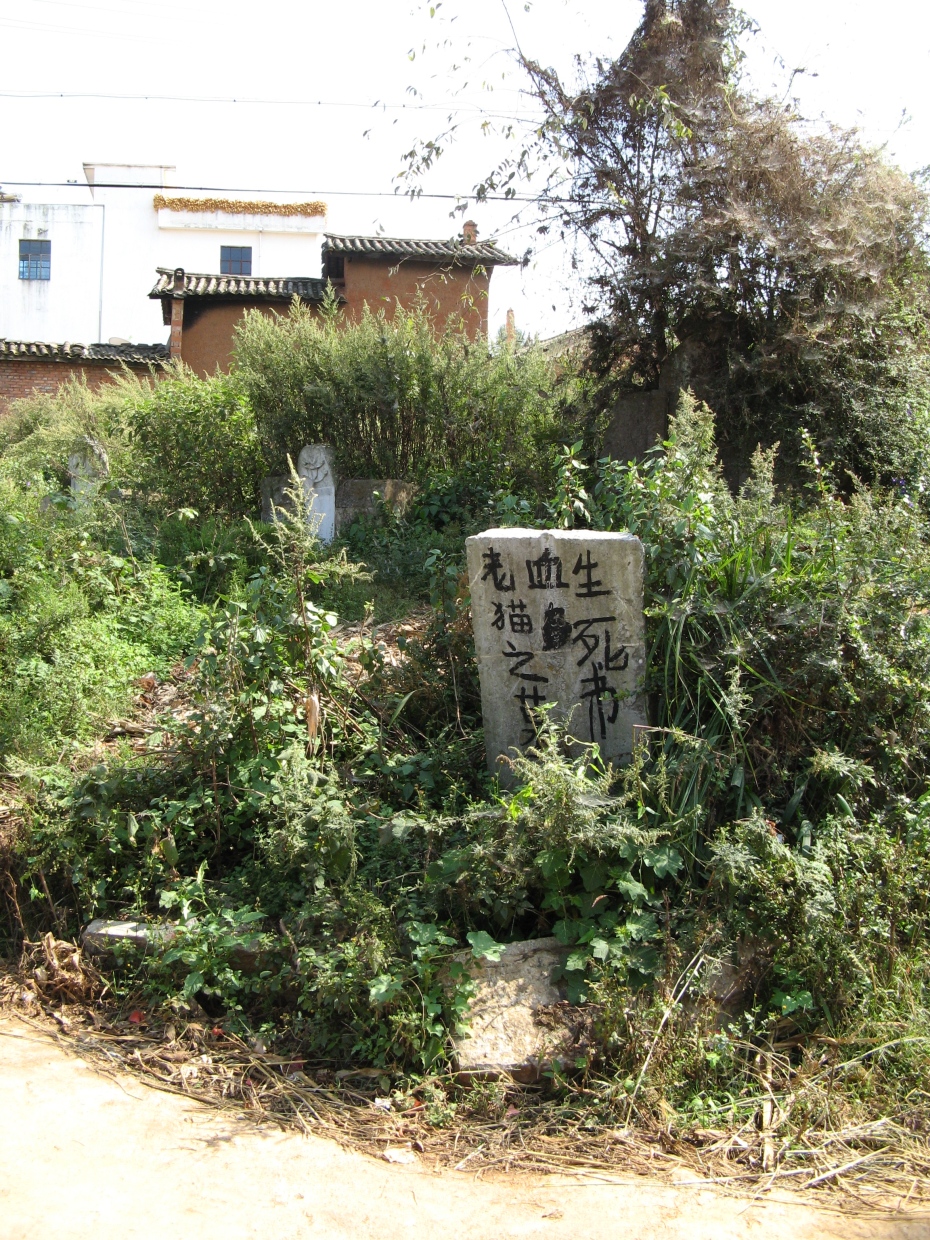 From past experiences,  UNESCO sites usually have some great beauty, but this site was chosen for its historical significance and rarity. Above ground cemeteries have not been allowed in China for several centuries. By law,  bodies must be cremated.

As we leave the village, this woman is headed for the fields with her child on her back. You can tell the dog has had recent puppies and we wonder…

Happy children play on the street. They don’t know they are poor when they get enough to eat, have loving parents, and adequate shelter.