Yesterday, we drove around near Semiahmoo point. We’d seen a resident eagle here in 2009 and hoped to spot it again. Instead, we found these dead trees, trimmed with a flat spot for eagle landings.

On this stretch of public land stand three of these giant perches.  Isn’t it nice what people will do to help nature become closer to us?

Our goal was to have lunch at VIA, and find a sign we’d seen where you could buy fresh picked peas, zuchinni, and other fresh veggies. We found the sign, and the farm, but we had just been swacked with high-priced store produce, nothing organic, and no room in our small fridge. We’ll return in  a couple of days. On that same road is the Birch Bay Waterslides, another popular summer venue for tourists.

Jim randomly chose roads and we discovered Birch Bay State Park, and at one point dead ended at a BP Refinery, We found a field filled with freshly baled hay rolls.

Following your nose is relaxing and fun, especially if you have a camera in hand. 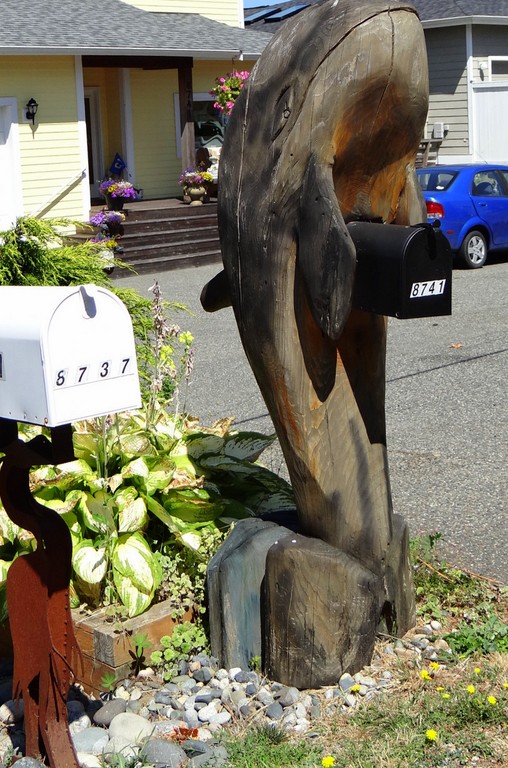 I find it enjoyable that people are creative, as these two mailboxes show, one a dolphin, the other an egret.

As we approached VIA, the tide was out and boats sit stranded. Deliberately, of course, but it looks strange to see several dozen boats sitting on the ground attached to a buoy. 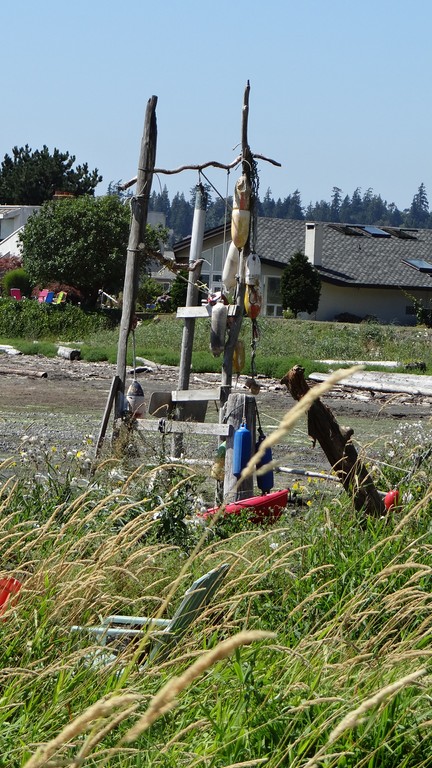 And if you live there, and this is your beachfront property, what do you do with those buoys that wash up on shore? Beach art. 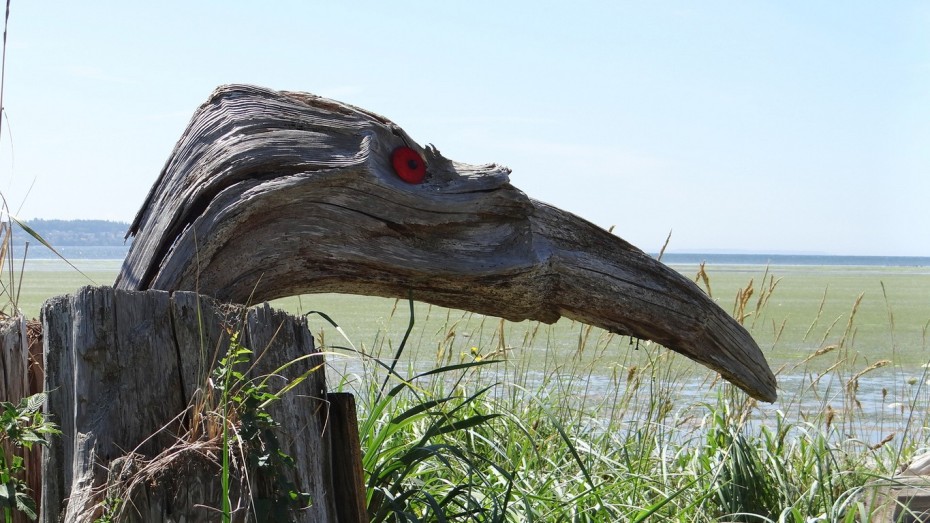 Driftwood beach art around Oakland and Berkeley is so popular, it slowed traffic down. The cities banned the practice and knocked them all down. Some pieces measured 9 to 12 feet high. The protest was so mighty, they had to rescind the ban.

By the time we got to VIA, the tide was really rolling in.

By the time we finished eating, the water was lapping up to the shore, just beneath our window.

Theie menu has this rendering of a skinny dog and the waitress told me  the painter, Jefferson, is a finger painter. She pointed out the bar surface was entirely finger painted by this method.

The bar has a lot of glare, as did the menu.

She told me this is his daughter. It reminded me of the face on the barroom floor. 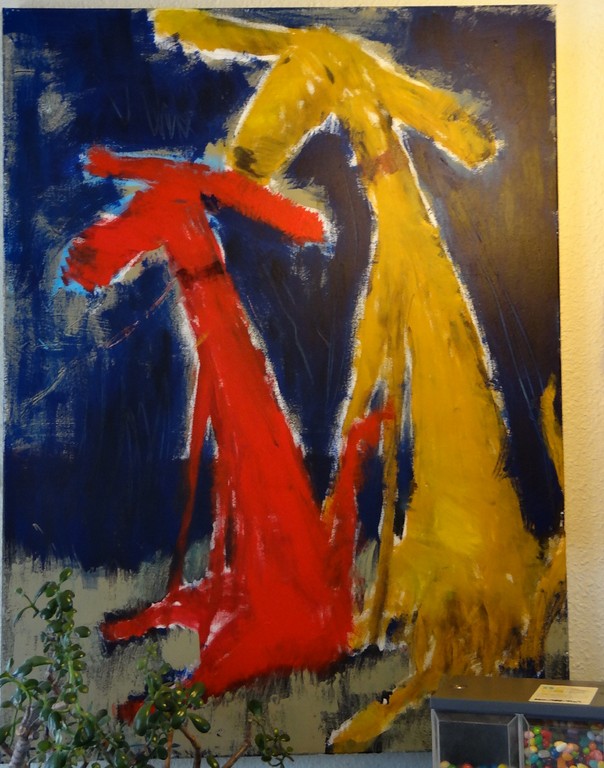 He seems to like to paint skinny dogs. The waitress asked him to paint her some skinny chickens, but he didn’t. 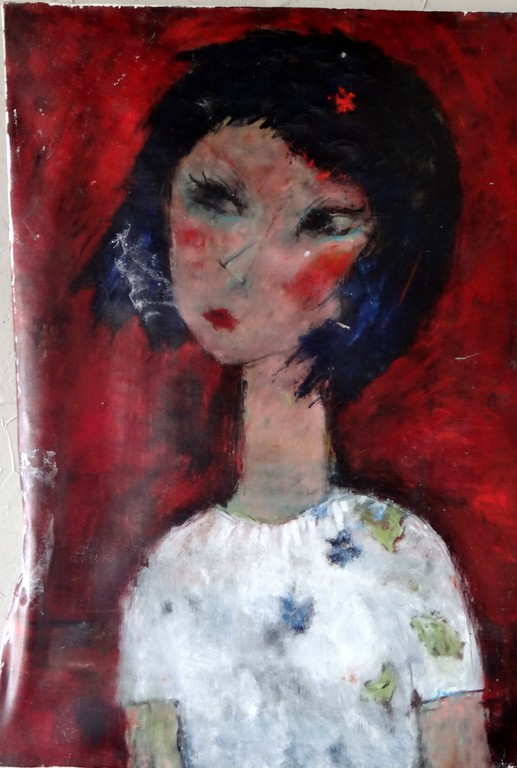 Another painting (of his daughter) on the wall, has a crush mark on the left edge. She explained that they had just bought the restaurant and had been open about 8 months when a “King tide” ripped through the place, smashed all the waterfront windows, flooded the floor and knocked ceiling tiles down, and this painting hit the floor and got damaged. The owner cleaned it up and rehung it on the wall. It has some dings and a small piece of seaweed embedded in the paint.

Art is so basic to human nature, from ancient wall paintings to, skinny dogs and driftwood. It isn’t all beautiful, but I love the idea of expression. It boggles my mind.

I had an appointment to see a specialist in Lodi, CA. and in the parking lot was this eye catcher.

It may represent youth, or the future, or…whatever. Look at it amid a sea of white, grey, and  two black cars. To me it says LOOK AT ME! I couldn’t resist taking a picture.

I ran from errand to errand yesterday without much time to do anything more useful. I have a rosary plant I got from an aunt in the 1960’s that manages to struggle on. Nearly killed it several times. While cleaning up around my sink, I noticed it had bloomed. After all these years it decided to bloom? Of course the blooms are so tiny, the cropped picture shows the plant bigger than life-size. You can see three more blooms starting on the stem. It brought an unbelieving smile to my face.

Then cleaning up little bits and pieces of useless information on my desk, I ran into stuff I’d tucked away, and here was a pillow menu. 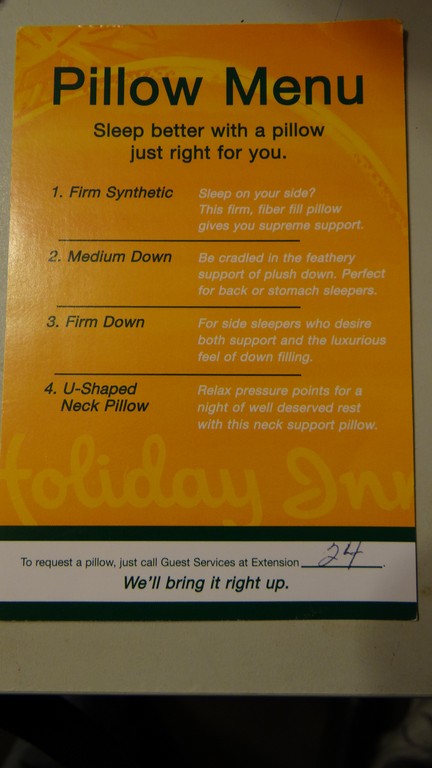 Have you ever?  Are we elitists, or what?

Other useless flotsam and jetsam hanging around my desk are interesting names I see on the road and I’m always curious about how they got their name:

When we are on the road, I always want to stop and find out about curious names. It must be an old Indian legend,  but the motor home doesn’t stop for such small stuff.

In the car, I can stop sometimes on a whim. So yesterday, I took this picture of a mailbox:

The Cheshire Cat. Cute. I have dozens of pictures of cute mailboxes. I’m ever planning to do something clever with my own. Ah!  Some day.

My septic system had a huge tree grown into it and the fix yesterday, hopefully will be completed today.

I have yet to send a single Christmas card and I must admit Christmas card exchanges are more and more sent by email. December turned out to be full of distractions and unusual events. But, as a collectiholic, I will never be without beautiful Christmas cards.

When I was growing up, Christmas cards had themes, the candle lit window, the wreath at the door, carolers, stockings by the chimney, children playing in the snow, overflowing mailboxes… 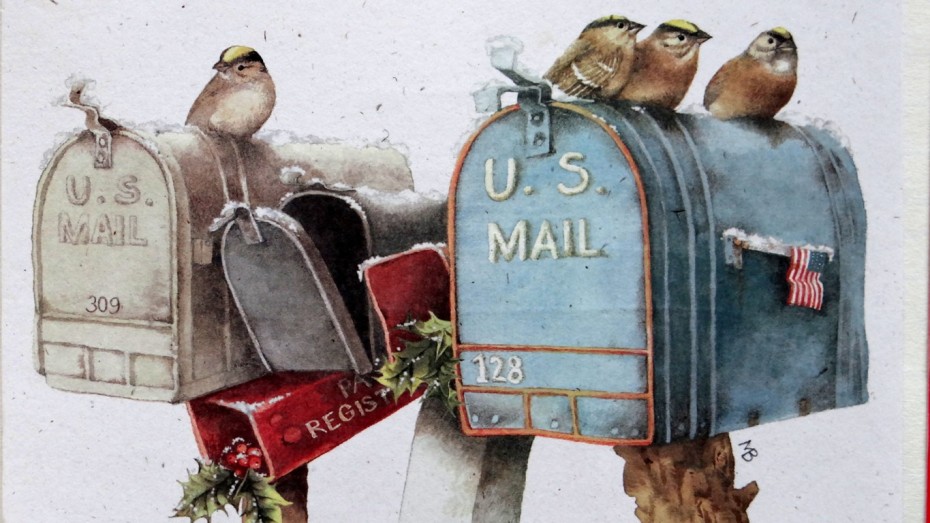 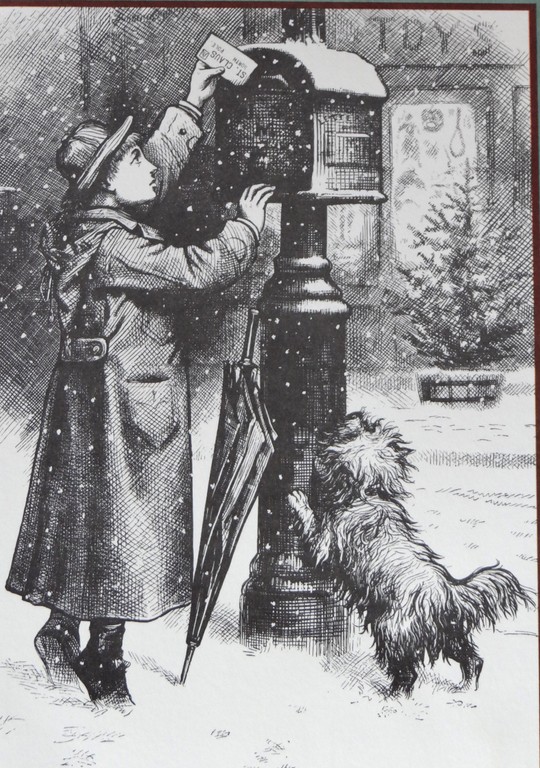 I’ll find another theme for tomorrow.

I’ve never stopped in the little gold-rush town of Soulsbyville until my treatments at SpineForce brought me here. My friend Jan and I decided to kind of meander and poke around town.

An old sawdust burner caught my eye. They are huge and hard to miss, of course. I didn’t know there were any left. They’ve all been removed or just fallen down. This one is being cared for and preserved. Bully for Soulsbyville.

Soulsbyville is located above Sonora, CA. on highway 108. And while it was a rip-roaring gold town at one time when the gold petered out, it became a lumbering town. Thus the sawdust burner.

And here, you can just pull over and enjoy a feast of blackberries along the road. Of course, Jan and I ate the big fat black ones before I remembered to get out my camera. 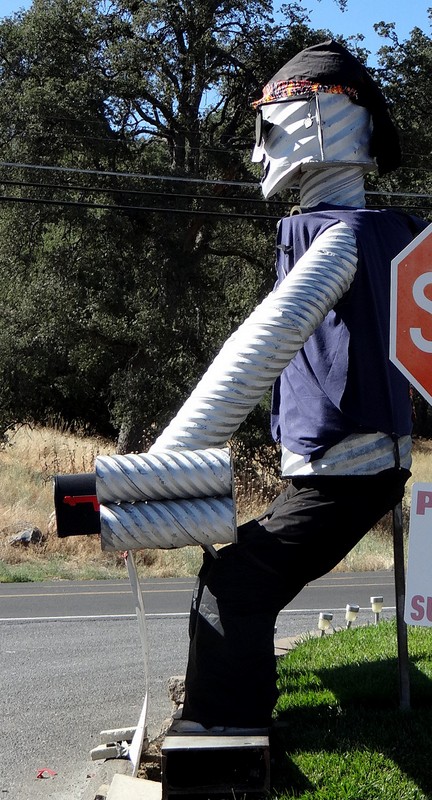 This question from a woman who builds pyramids in her yard. Huh?  I like pictures of funky mailboxes. And, in fact, I’m in the process of designing one of my own since my mail box post is rotting and needs replacement. 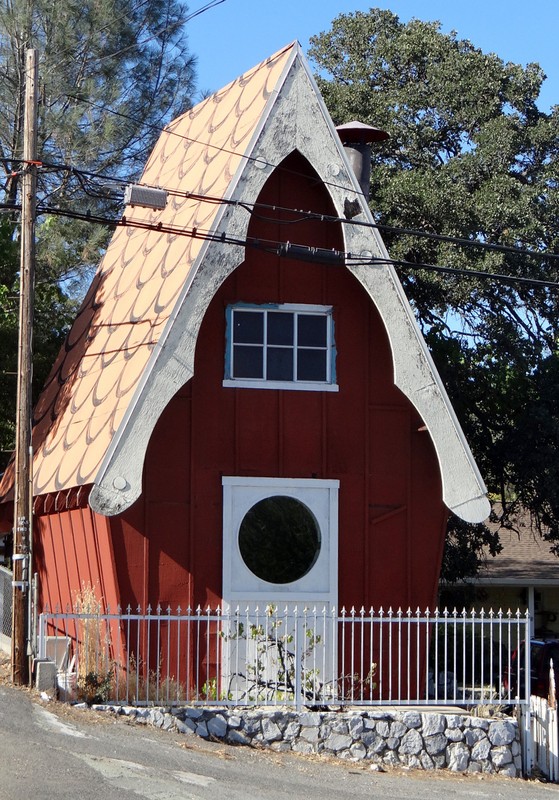 I was telling Jan how I missed the old Byrd House since they widened the highway and voila! There it was, not gone after all. I was truly surprised and even though it is crowded by a power pole and practically touching the electric wires, I had to record this strange building. It was once Byrd Realty Office, many years ago. I’m glad it has been preserved. I guess I like Eclectic things.

We eventually got to the gold-rush town of Columbia. I told her I knew where there was a dragon but it is in someone’s yard and I’ve never gotten a good picture of it. Well…

Jan pointed out that his snout was blackened and he must snort flames.

Isn’t he handsome?  We found the pipe and propane tank hiding near his tail. And, no one came out and took a shot at us. People are pretty laid back here.

As we were leaving the “dragon” road, we spotted this old miner’s cabin. The Motherlode used to be full of little miners cabins. They, too, are falling apart, being removed and are just supposedly useless relics from the past. This miner knew to build on top of a rock to prevent his foundation from rotting away. 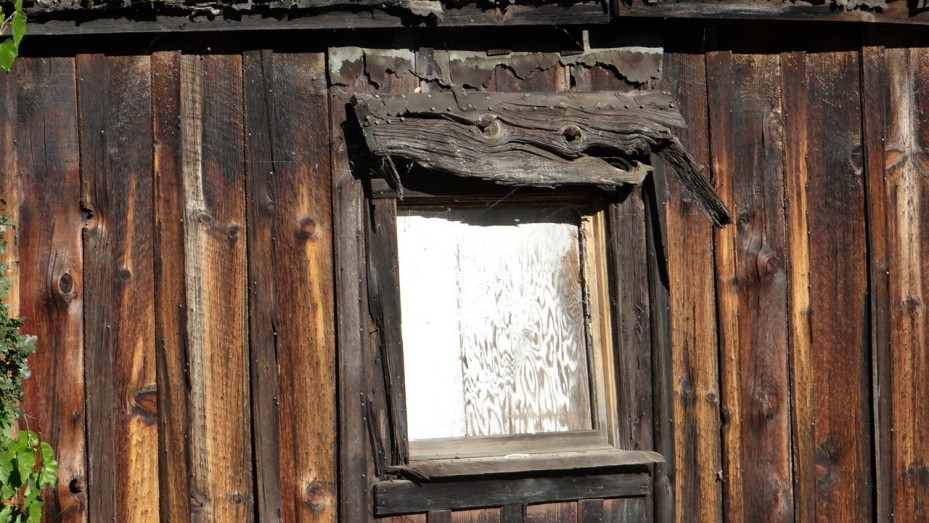 I’m glad this old cabin is still around to remind us of the rudimentary places the miners called home. This one is quite big compared to others I’ve seen, and must have housed a wife and children, too. The brow over the window, or former window, is still holding on. 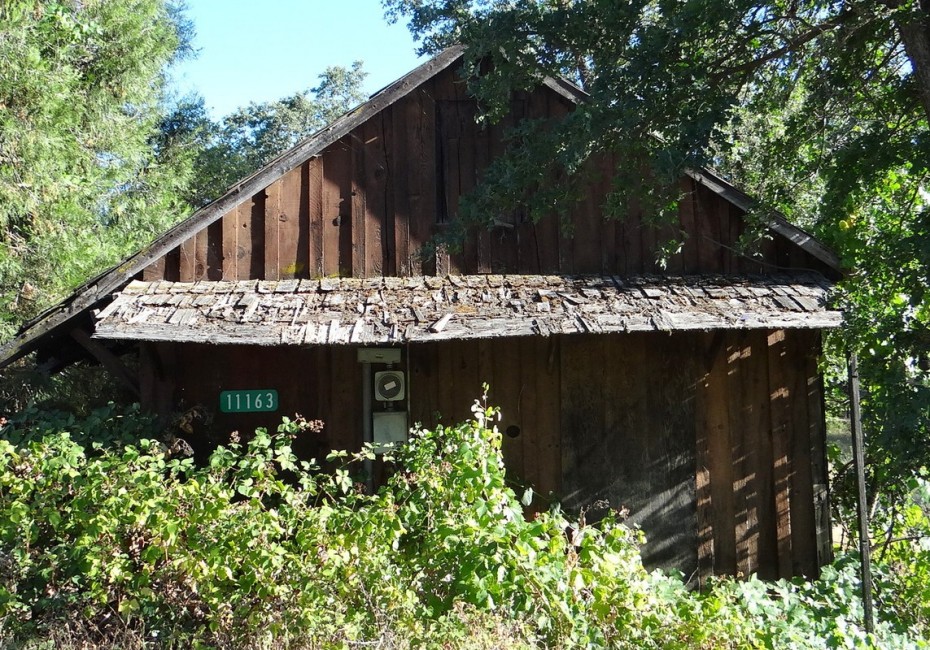 From the front, you can see a modern address and electric meter. It is very possible someone still lives here.

Jan wanted to visit Spineforce and if she hadn’t been with me I’d have probably just headed for home instead of seeing things from a tourists eyes. It was fun.