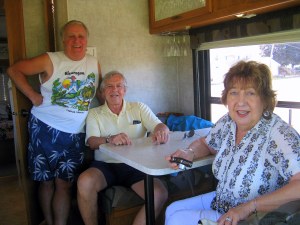 Jim has been talking about his best friends from Revere, MA where he attended grammar and high school. Great people, wonderful memories, that nothing can compare to, of course.  And, he has teased me with statements like, “Wait ’til you get to Revere, you’ll taste the best Pizza in the world.”  Well, I know what that’s like. You have your comfort foods from childhood that stay with you forever, and your best friends are golden. I’ve been there.
The day was set, Bill and Loretta Gallagher stopped by the motor home to pick us up. The plan was to drive the old neighborhood haunts and see what’s new and changed…we’ve all done it. 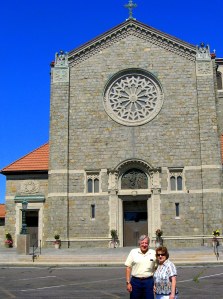 The first stop was this beautiful old St. Anthony’s Catholic Church where Loretta and Bill got married 48 years and one day earlier. Yes, it was the day after their anniversary. Bill pointed out a small, back stairs flat where they first set up housekeeping across from the church. 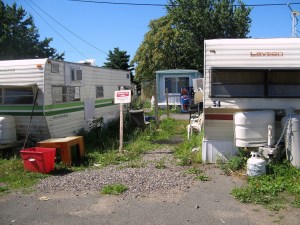 The next stop was Lee’s Trailer Park, to the very spot where Jim lived as a kid. Hadn’t changed, the trailer sitting at his old address, was just a bit newer. The weeds looked the same. The neighborhood was strongly Jewish, then. Bill quipped that on Jewish Religious Days, He, Jim and Al Penta were the only ones in class. The park was a couple blocks away from Suffolk Downs, the race track where Jim worked. The Greyhound races were next to the Downs, and the beach, with the boardwalk and carnival all within walking distance. They all had paper routes. 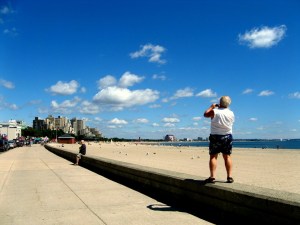 Revere Beach was the first designated public beach, about 4 miles long. Clear now of all the carnival rides, dance halls and pavilions. Only their memories of great fun were left. 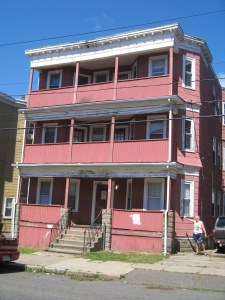 This crumbling old building Jim moved to during his high school years. He and his friends all had jobs. They shoveled snow, they mowed lawns, Jim washed dishes and worked at a department store receiving dock. Bill, had the good job at a gas station. He also had “the car”. If you had a car, you could attract the girls. They had to endure a DMV official who would stand on a street corner and routinely stop kids and check for their registration or any fix-it violations. At one such check he stood in awe as 15 kids piled out of Bill’s Henry J. 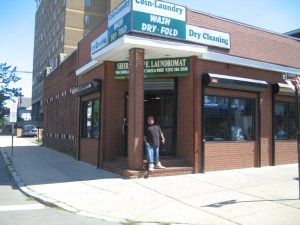 This used to be Schwartz’s Deli where Jim washed dishes. The Jr. High School was torn down and rebuilt, the High School was torn down and moved to another location, but the down hill streets, where they rode their sleds were narrower then they remembered and all one-way, now. Grabbing onto the back of the trolley cars and “stealing” a ride to get downtown produced more stories of derring do, but the trolleys are now gone, replaced by buses. 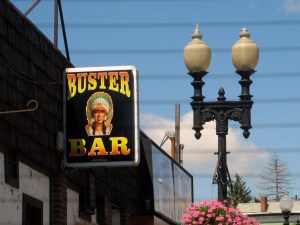 The bar where they all managed their first illegal drink. Bill, Jim and friends formed their own  Hot Rod Club called the Sharks. They dressed in studded leather jackets and rode around town like the masters of the universe that they were. Ahh, high school. Loretta said it was just like Grease, the movie.
Then we stopped at Dolly’s house. Her husband Arthur, was not from the neighborhood. Dolly was one of the gang and Loretta’s best friend from first grade. She lives in her parents (now deceased) house. Everyone gathered at Dolly’s. They all watched Elvis together on Ed Sullivan and again the memories flowed around the table. Where is so-in-so? Who died? They got a divorce? What happened to….? 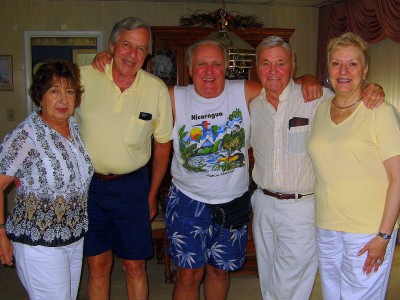 I quickly adopted them all as my friends because it was such an enjoyable reminiscence, the high school girlfriends, the ice rink, roller derby, the uptown girls from Boston, the rumble that never happened because of a burned out clutch. All fun. And then, the famous Pizza… 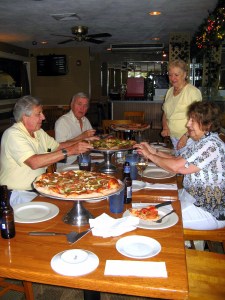 A plate was turned upside down at the end of the table for the missing Al Penta who will return to Revere in October. (I met Al in Monroe, WA. last year.)
Now, the pizza at Companions Restaurant. I hate to admit it but the margherita pizza was the best stuff called pizza I ever tasted. Their shrimp scampi pizza and the sausage and onion, good, but the margherita will make you swoon. Its all thin crust, slightly sweet and quite crisp. The cheese is different, somehow.  The tomatoes fresh with fresh basil and just a touch of sauce. Wonderful stuff. Different than what we get in California. Whatta day!