The motorhome is still parked here at Heron Lake State Park about 20 miles south of Chama, New Mexico while I am recovering from my May 27th accident.

My right ribcage area remains slightly swollen and tender to the touch. I’m pleased to report some progress…with the exceptions of a cough or a sneeze, the poppings, with the associated pains, in my chest have finally stopped! I remain taking Ibuprofen, icing my ribcage area 2-3 times a day and wearing an elastic bandage abound my chest. The doctors told me to expect 6-12 weeks for recovery. The accident occurred eight weeks ago today. Can you tell I’m ready for the recovery to be finished?

While on a walk the other day, i noticed this interesting critter. I’ve seen lots of lizards. They all tend to be long and skinny…like a cigarette with four short legs and a tail. This guy was really different. He’s only about two inches long…from the tip of his nose to the end of his tail. He’s also quite pre-historic looking… 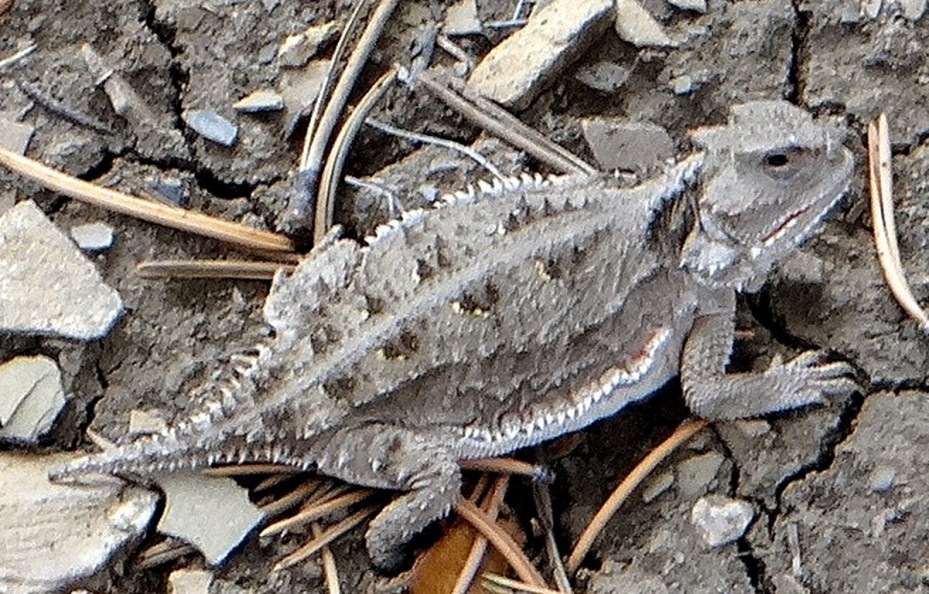 Back on July 9th I took this photo of a common lizard using my camera’s illustration mode. This mode really makes him look pre-historic…

Seeing interesting critters out in nature is another joy in the life of a full-time RVer!

In 2009 we hiked to Fort Bowie, near Chiriacahua National Monument and caught a glimpse of the Butterfield Trail. I knew it was a stagecoach line to deliver the mail out west. We hadn’t even read the BLM information on the Painted Rock Petroglyphs when we say hello to a stranger who just happens to be an expert on the Butterfield Trail and this whole area in general. He just published a book,  The Butterfield Trail And Overland Mail Company In Arizona. Jerry Ahnert’s  book was identified by the government as the definitive historical work on the subject.

The Butterfield Trail ran from Missouri to the Pacific, 3,000 miles, a transcontinental highway, that passes near the petroglyphs. In fact, Butterfield was a New Yorker with stage lines in the East. He hired two guys, named Wells and Fargo. They all drove stages at one time, according to Jerry. 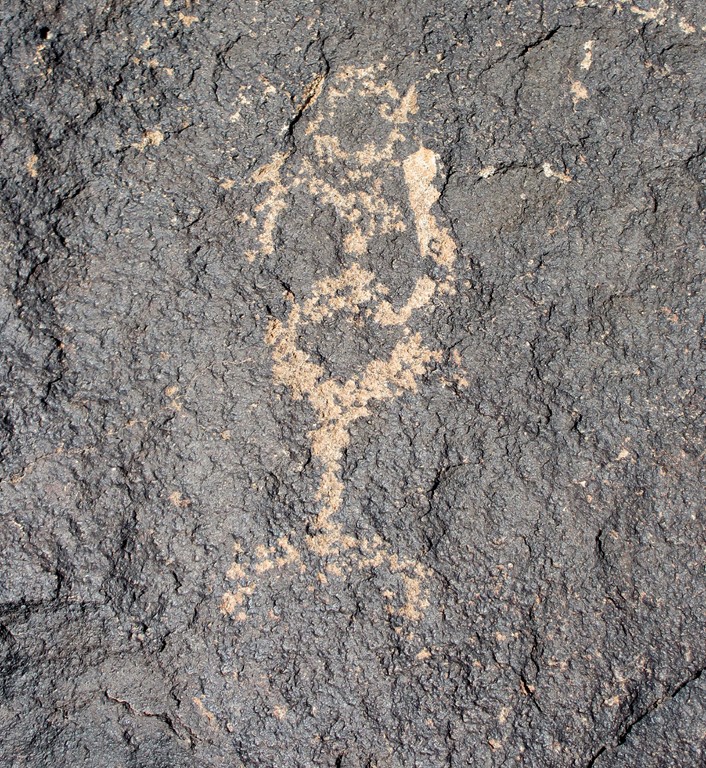 Petroglyphs have ancient origins and these are typical of two Indian Tribes, the Hohokam and Patayan who peopled this area as long ago as 4,000 years. Various indicators date them  as late as the 1600s. If I were to interpret this drawing, it appears to me to be a pregnant woman with a round fat middle. The experts call the fat drawings like this one lizard men? 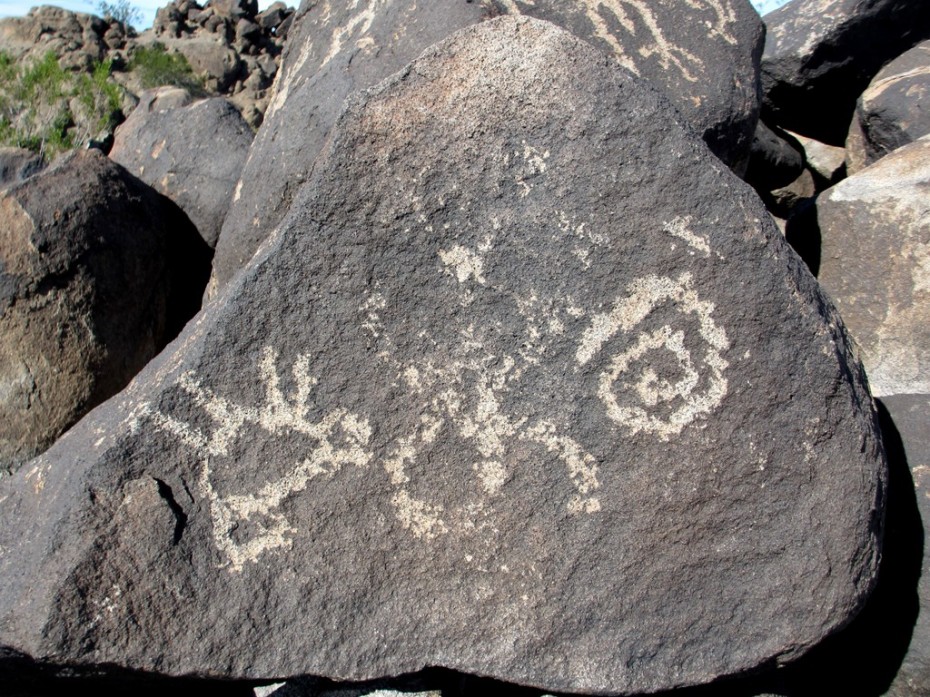 An upside down figure of a man or animal is said to be dead. 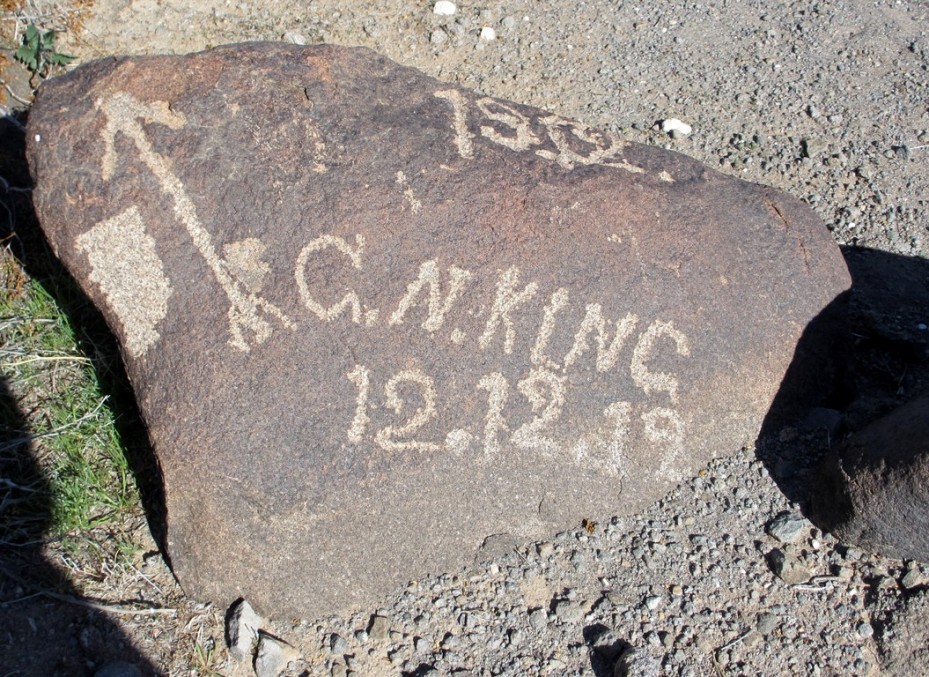 A glyph from 1912 giving directions, it appears. The Old Immigrant Trail, The Morman Trail and other major expeditions traveled the same or similar routes through the West and passed near this obvious outcropping in a terrain that is distinctively flat. 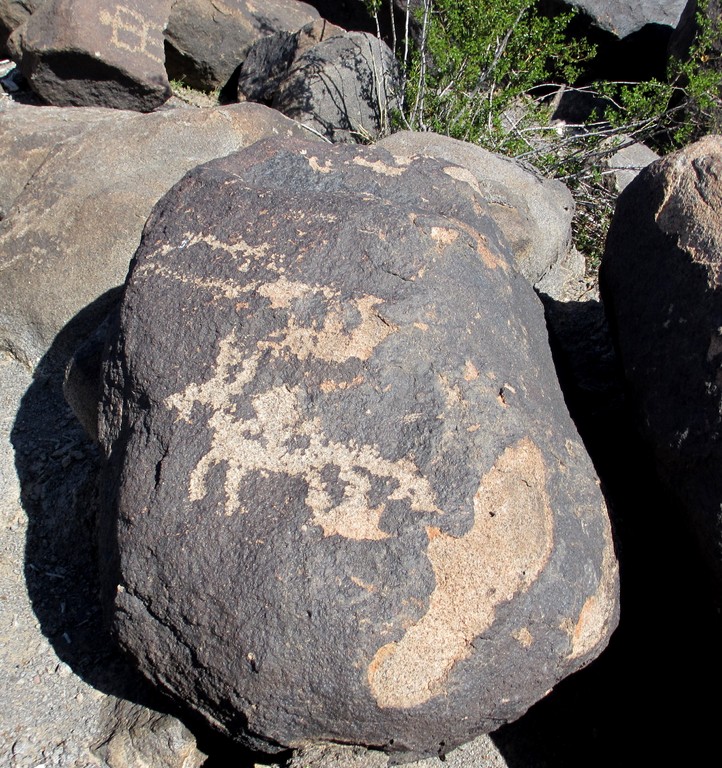 A donkey or horse with a rider dates the drawing after the Spanish brought horses to North America.

A fish above a river. 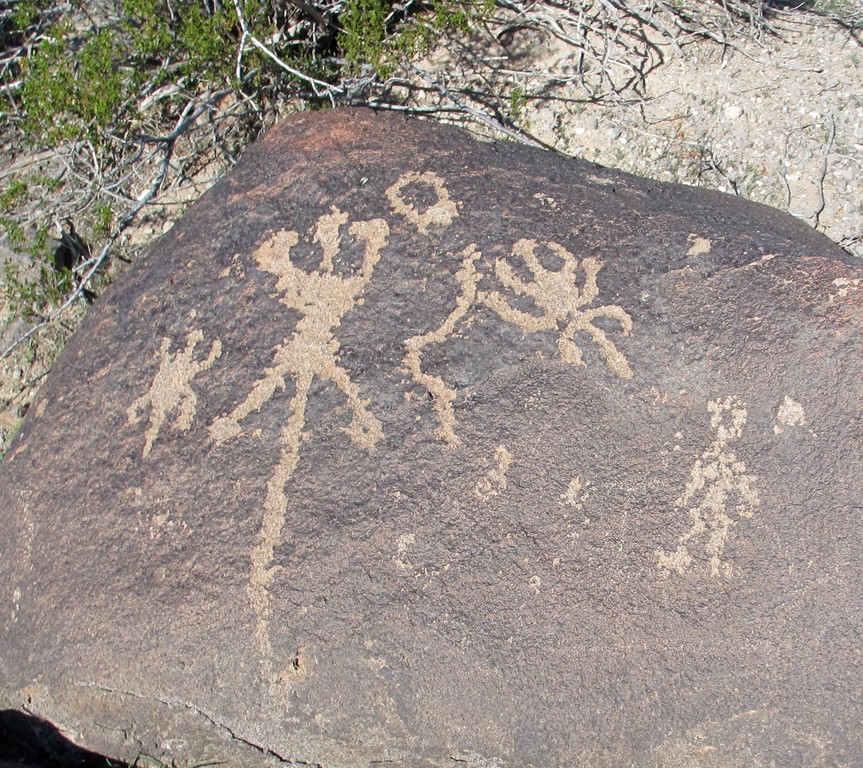 To me, this resembles a child sitting down, the way children do. The experts I’m sure disagree.

The spirals are typical of Hohokam drawings.

Impossible to tell if the drawing is  a dog or a coyote. It had significance to the artist. 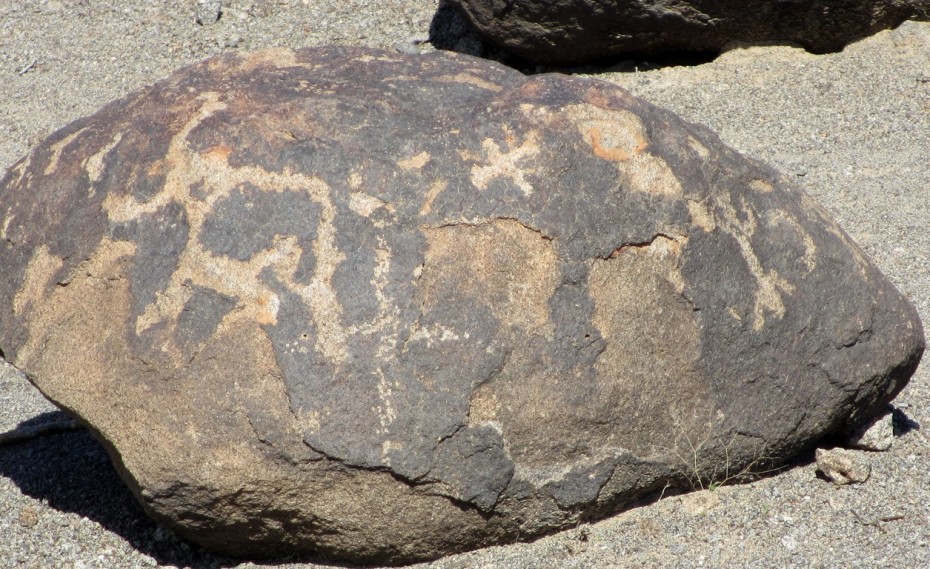 To me the main figure here resembles an elephant?  Could it be an older glyph of a  mammoth? 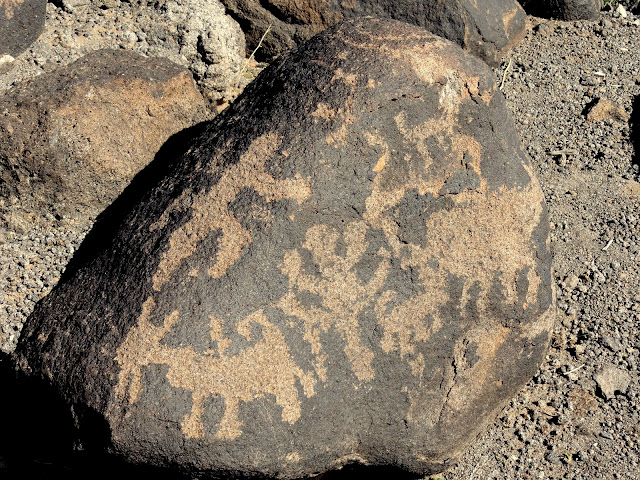 The figure near the bottom is possibly a bearded goat?

It was fun. I took way to many pictures. More tomorrow. But, the following picture is of a sign placed by the Mormon boy scouts approximately 50 years ago. They ventured forth to mark the Morman Trail. On that spot you can stand and envision Kit Carson, Big Foot Wallace and Pomp, Sacajawea’s son who grew up to be a scout.

I’ll publish an album of the “ancient graffiti”  within a few days. I have some culling to do.

We walk old town after we get back to Jiliang. The town square is teeming with people from everywhere. There are performers and  a hodge-podge of eating places. We witness a rat being carried out of a candy shop with a tongs. 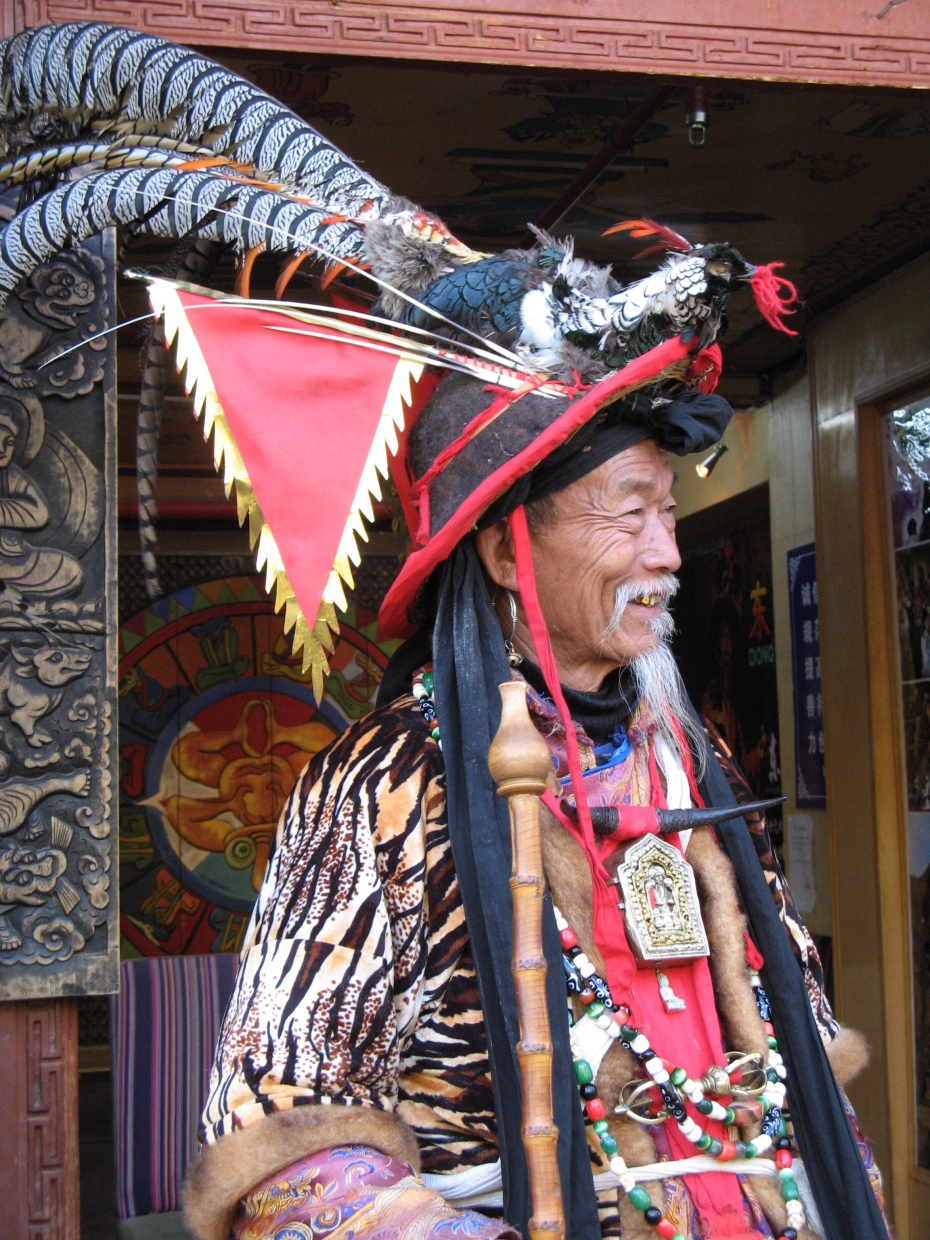 If only we could speak the language. What tales might this fellow tell? 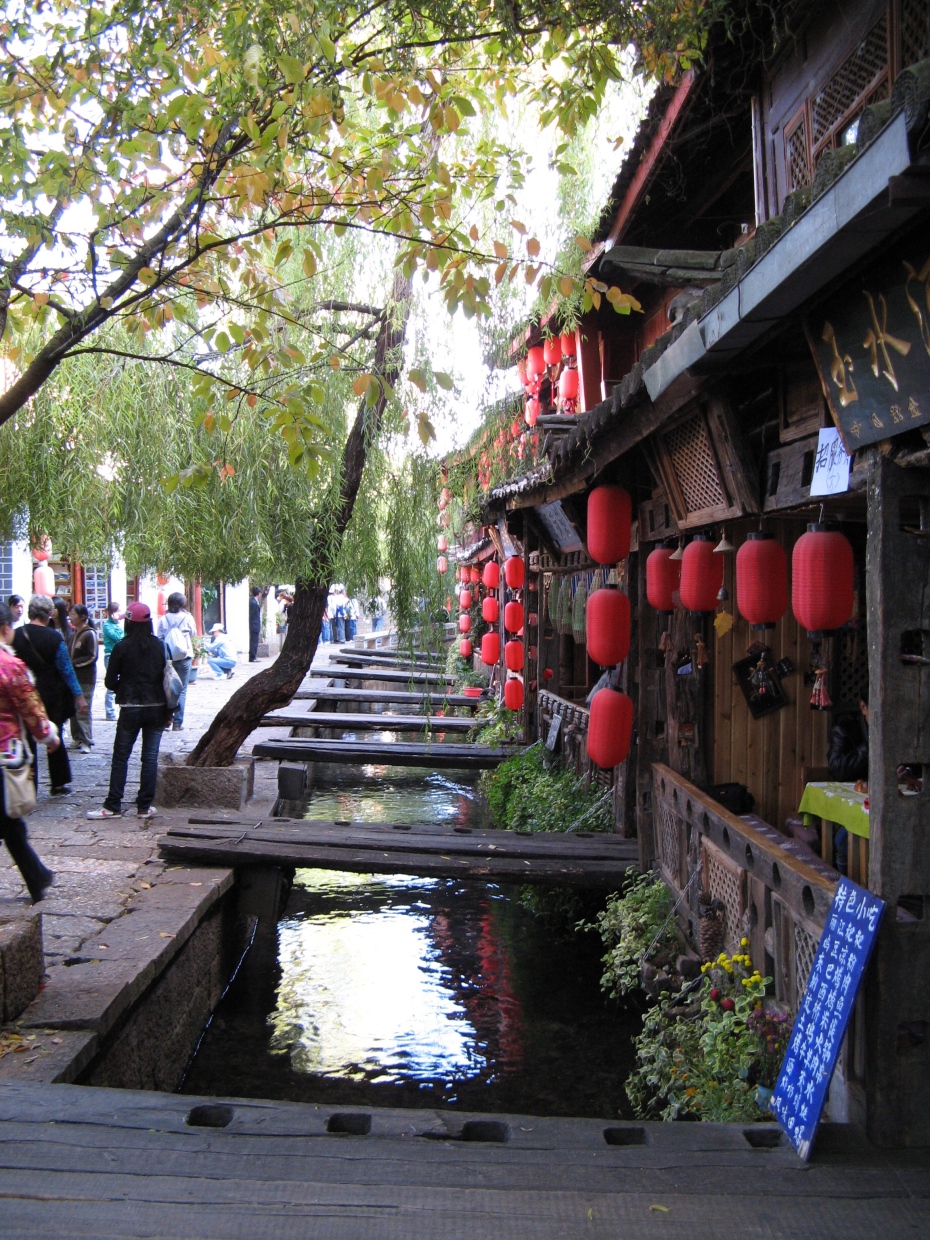 You have to cross the moat on makeshift boards in some places to visit a shop.

Like this Chinese couple we could have had “fast food”, but instead we chose to dine at crowded tables along the moat for our evening meal.

We choose various sticks of vegetables and meat served with a small wok of  hot oil to cook it in. Safe!  We avoid the snails, pig tails, pigs  feet, crickets, grasshoppers, ants, beetles, lizard  and the ever popular dog meat, even though the Naxi love their pets. Maybe they love them too much.  Vicki buys an unattractive looking bean cake with spices for all of us to taste and it is delicious. Sweets in this part of China have been very good. Our last night in Jiliang, reluctant to let go, we enjoy the street  party until 11 p.m. 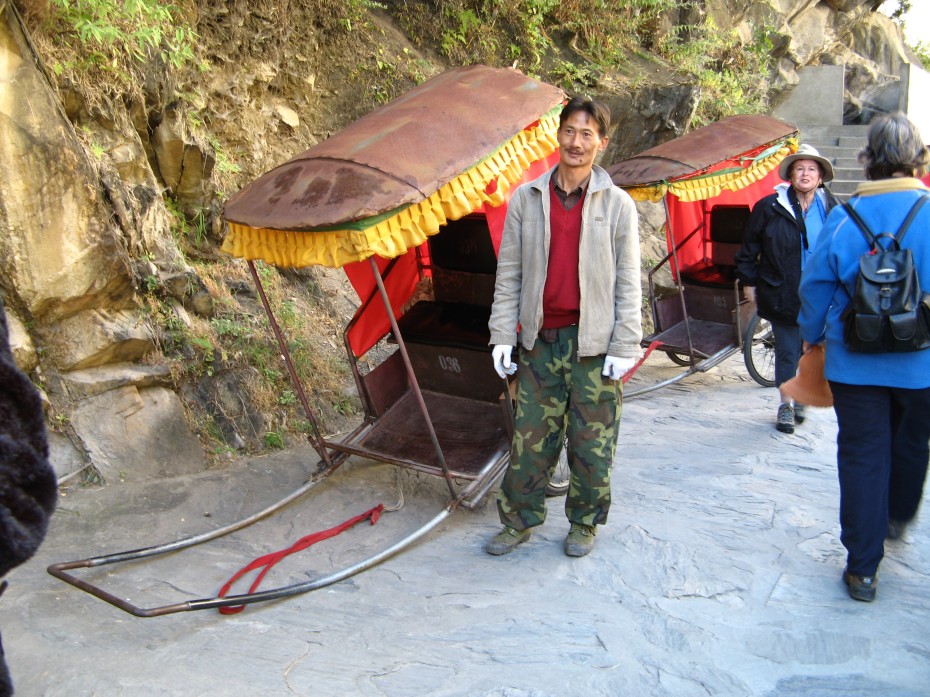 In the morning, we take the bus up the mountain again, this time to view Tiger Leaping Gorge. The gorge is on the Yangtze and stretches about 10 miles  along the Chinese and Tibetan border. The Chinese claim it is the  deepest canyon in the world and are planning to obliterate it and build a dam. This gorge is also a UNESCO site.  We are hooked up with a rickshaw driver for the two miles up  the canyon. 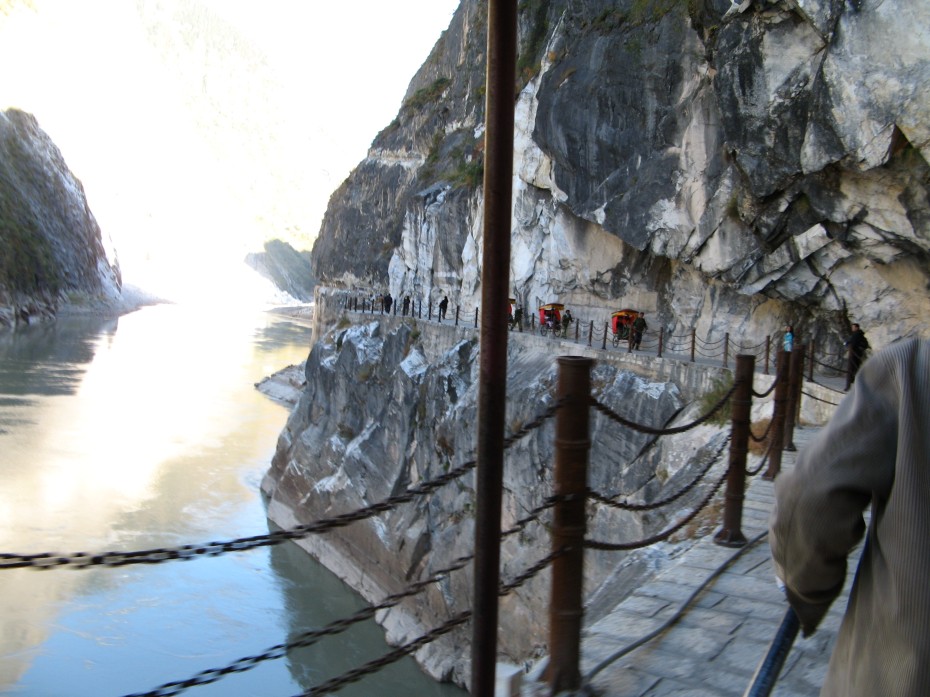 We get our first look at what is ahead. 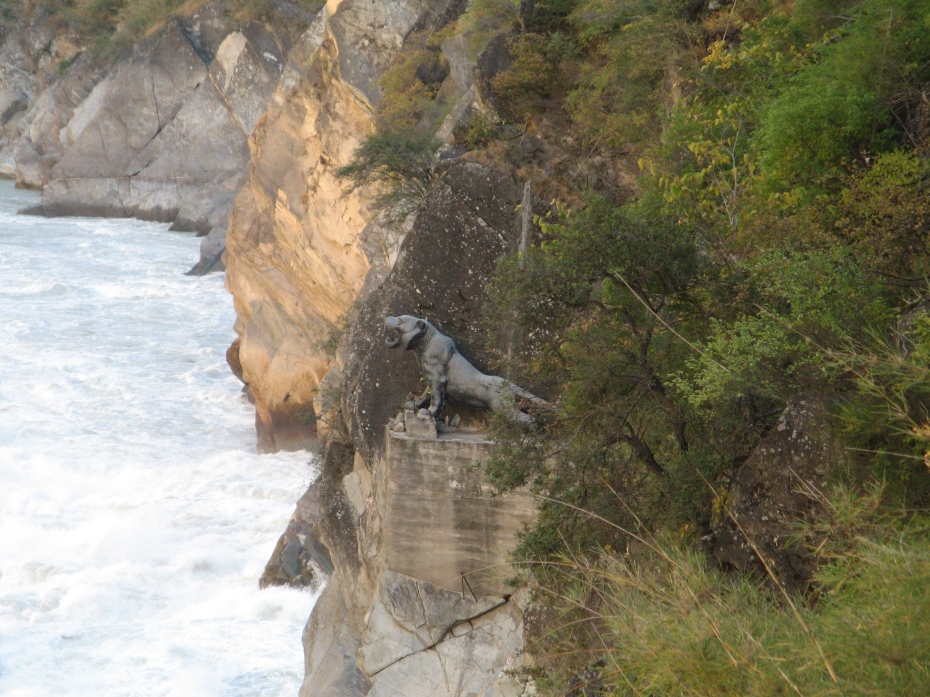 The rickshaw journey ends at the spot where the Emperor went hunting and aimed at a tiger. It escaped by jumping across the gorge at one of its narrowest points. Thus the name of the gorge. The gorge may have been narrower then, but from what we could see, no animal could have jumped the 70-75 feet across the gorge. 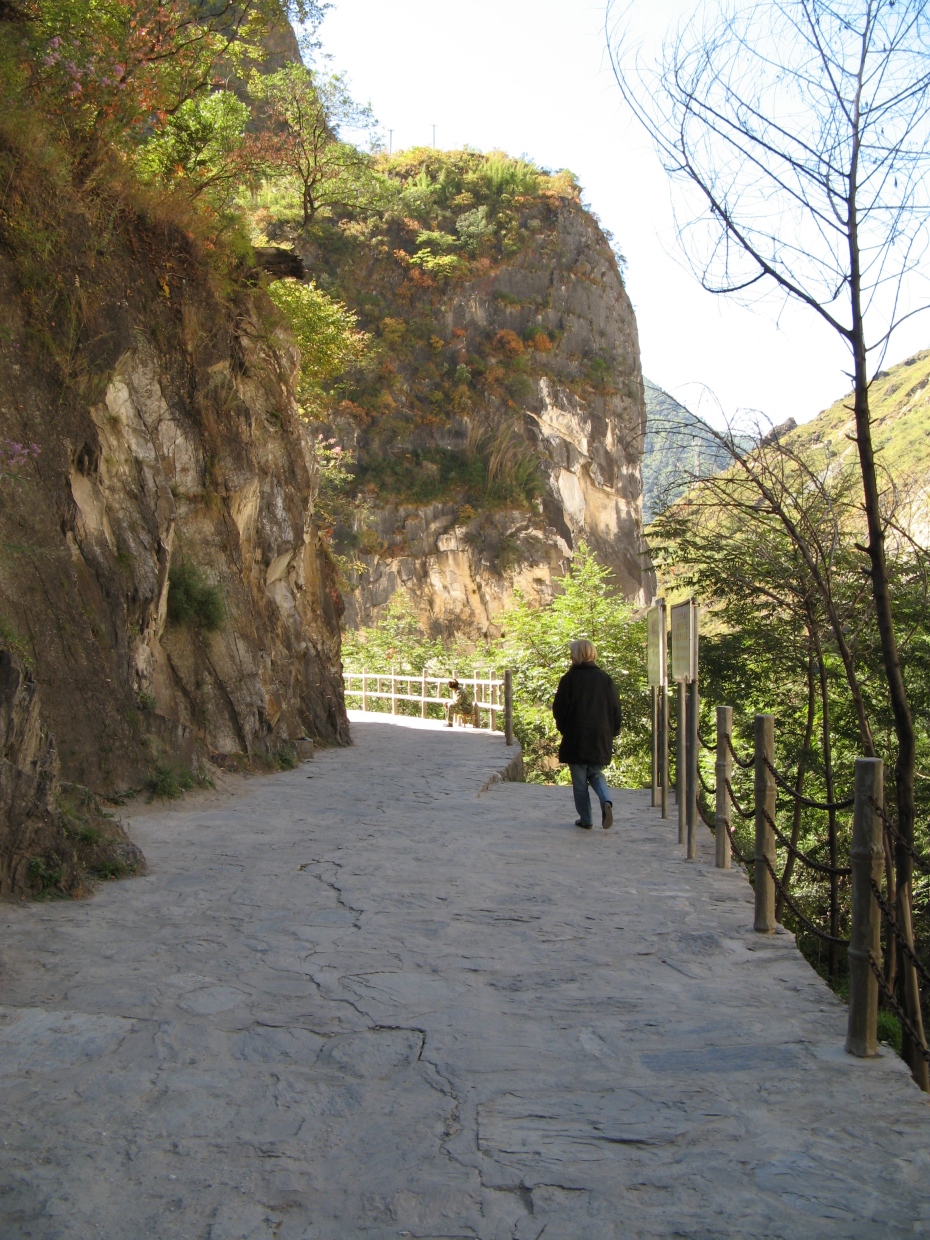 On the return, we pay our drivers off and tell them we’d rather walk. The canyon is beautiful but the road is ever more fascinating, chiseled out of solid stone. 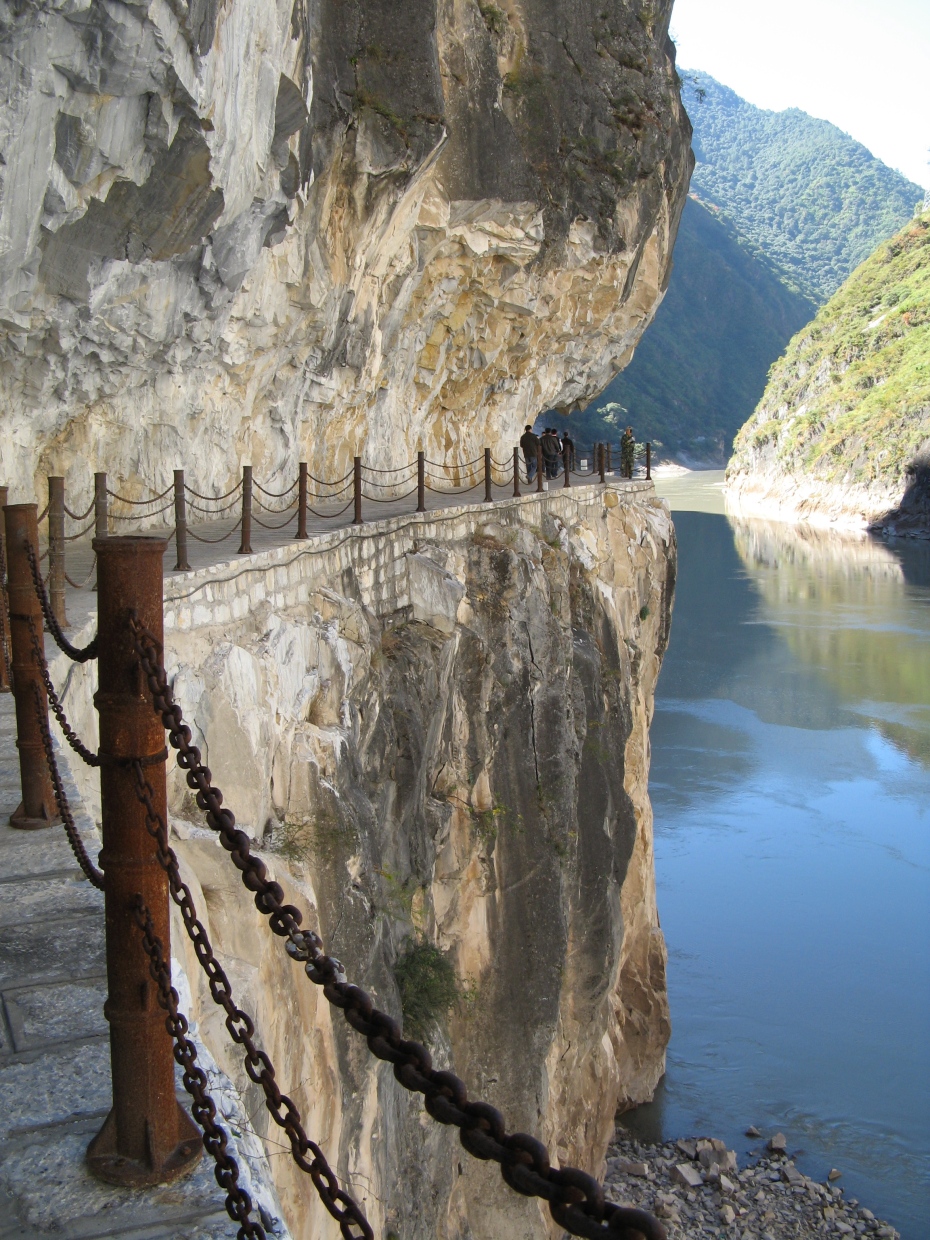 At one point I tried to get an idea how the railing was attached to the wall.

Leaning over, I could barely see  the super structure.  For the  most part the posts seem to be sunk into the solid rock and you wonder how they built this marvelous road without huge machinery.

In some places the posts seem perilously close to a disintegrating edge. And, in fact, at one spot in our two-mile stretch, soldiers stood guard to prevent anyone from wandering too close to the edge. 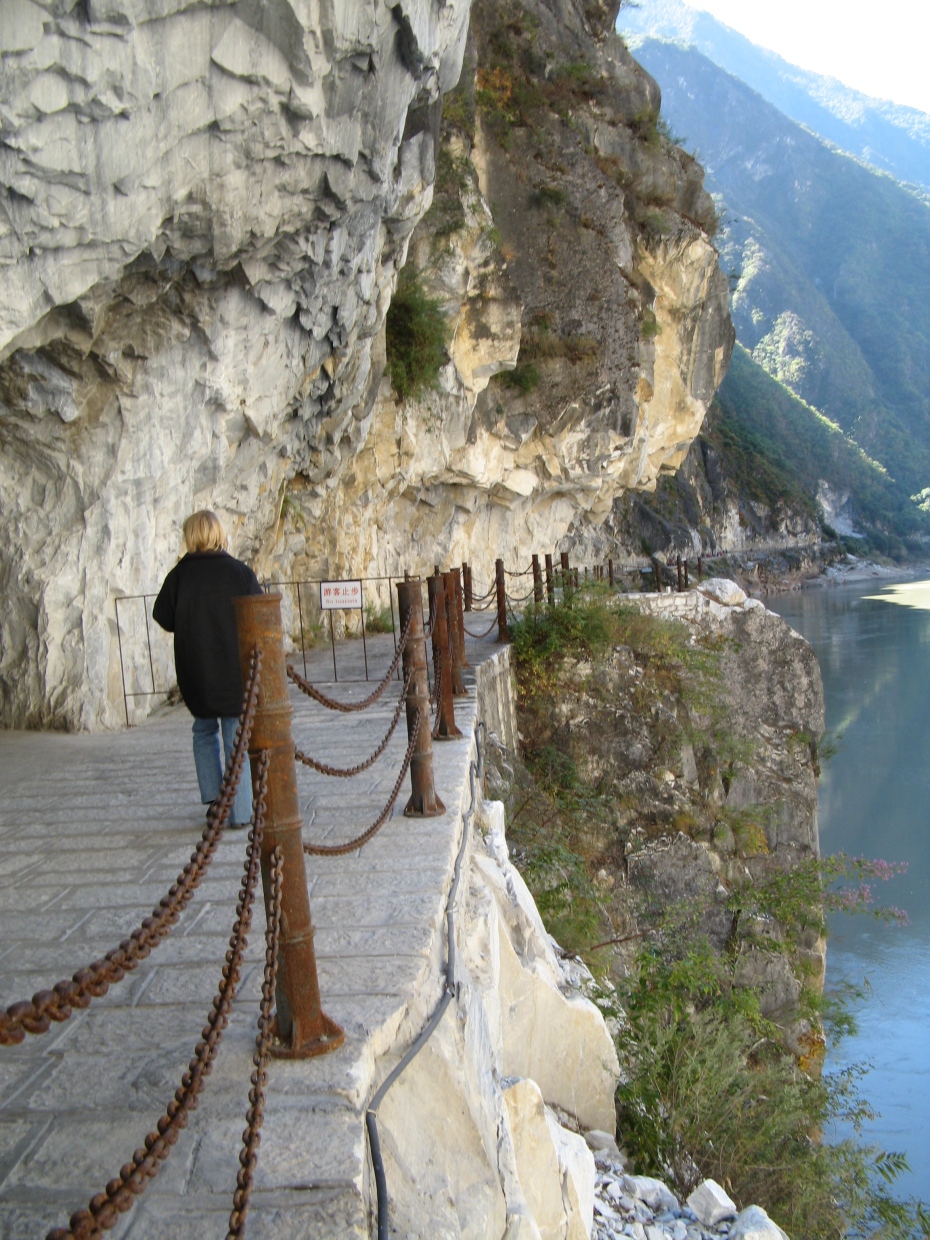 We came to a spot where the road continues down an adjoining canyon, blocked to us.  Vicki says backpackers go everywhere in the canyon.

Far below us, the water rushes and sings over the rocks. 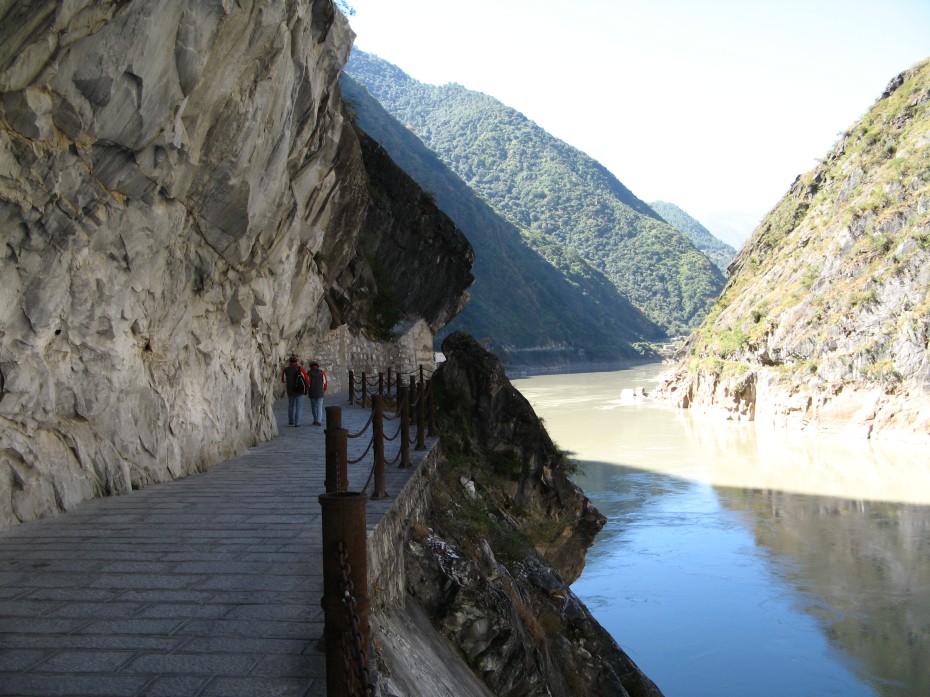 In other places it is calm and serene. Always beautiful.

At every turn in the road is another sheer wall tapestry of rock formations. Tomorrow we leave this area for Kumning.