After each day’s activity, we return to Jiliang, (lee-john) with its waterwheel churning, strange characters walking the streets and at night, the marvelous market place with people of every description eating by torch-light  along the moat.

The place is fascinating but each day, our guide has plans for us.  After the snow-covered mountain, we returned early enough in the day to grab few pictures before it got dark.

A diverted part of the Yangtze and Jade  rivers flows right through the middle of town and is used for everything including washing dishes, dogs and clothing. We wonder about sewage, but don’t ask. The water always appears to be clean.

If you get hungry before dinner hour,  which starts  quite late here, you can always grab a snack from a small stand. We joke, Chinese fast food. Ha, ha! We saw a rat being carried out of a candy shop with a tongs but we refuse to be squeamish.  This town rocks, day or night. So, who needs candy?

Children play in the streets without a hovering parent to watch them. It feels like we are in some magic wonderland.

There are unreadable signs everywhere. Little bridges, too, with watering troughs for animals. You are as likely to look up and see a yak or llama wandering the streets on a leash as you are a dog or horse.

Town is always teeming with people. We eat along the moat each night. Viki buys us an unattractive looking bean cake with spices for all of us to taste and it is wonderful, but none of us would have chosen it from its looks. We order various vegetables and meats on a stick the waiter  brings to your table with a small wok of boiling oil in which to cook your food.  We have fried milk for dessert. Safe! We avoid the crickets, snails, pigs tails, beetles, ants, grasshoppers, moths and the ever popular dog meat.

Again, the bus takes us into the Eastern Himalayas, this time in the opposite direction of the snow-covered mountain village of Hanzai to a place called Tiger Leaping Gorge. 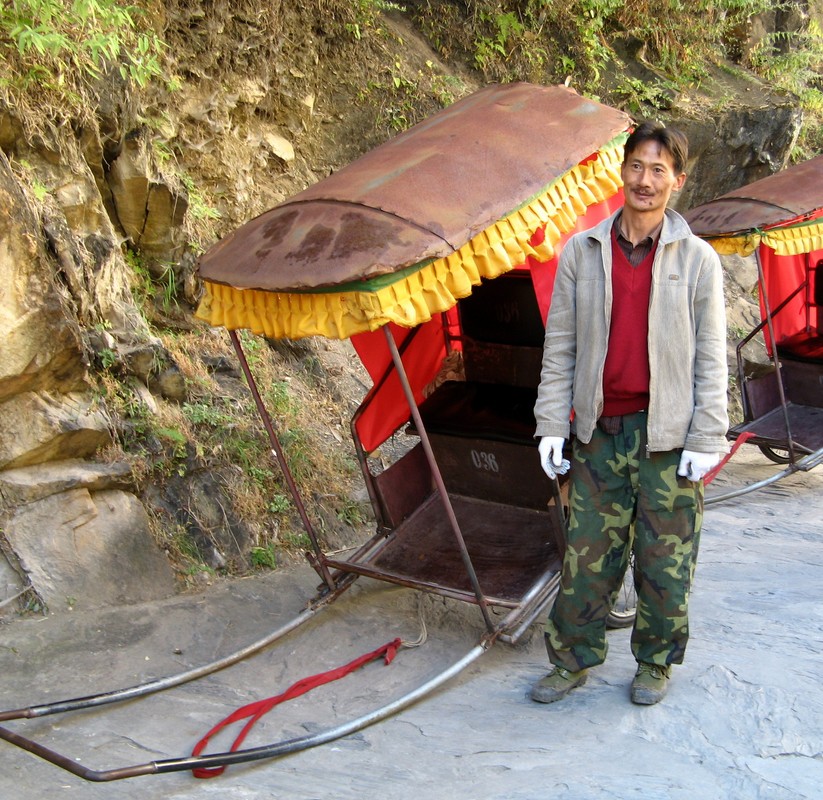 When the bus can go no farther, we are taken about a mile by rickshaw. We meet our  driver and are thrilled that this is a real rickshaw, not a bicycle peddled device like the one we rode in Beijing that was touristy and contrived.

The trip into the canyon is gloriously beautiful. It follows high above the clean, glacial river crashing down below us. 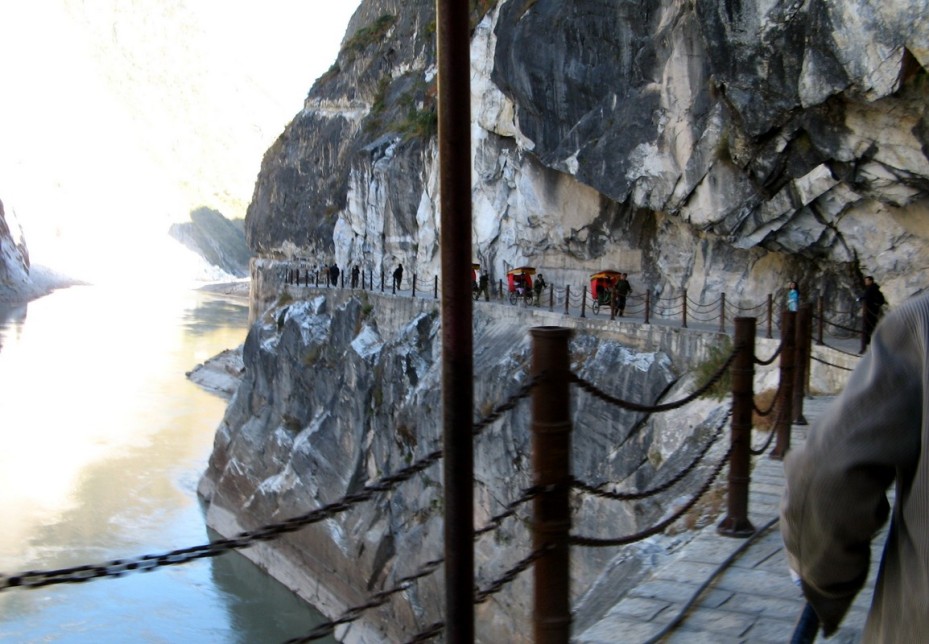 The road itself is chiseled out of solid rock. In some places, it is wide enough for a small car to get through.

The rickshaw jiggles as we move and the pictures jiggle too. The rickshaw takes us as close as he can to the narrow place where the Emperor was hunting a rare black tiger and it leaped across the gorge and got away. Thus the name of Tiger Leaping Gorge.

And there, at the very point of his jump, a magnificent statue of the rare beast. The canyon appears to be about 70-75 feet across at this point and some of the men decide the tiger couldn’t have jumped it. Viki tells us the canyon was 7-8 meters, (24 feet)  at the time and the river has widened since then. Other people hike into the mountains beyond the tiger to see a beautiful waterfall, but Viki has asked that we do not go off trail though we see back packers coming in from the wilds. Our tour isn’t set up for hiking except for somewhat easy, controllable hikes like at the top of the gondola to see the snow covered mountain, or something that can be done by all with a guide making sure we don’t get lost or hurt.

Our rickshaw driver waits for us but we pay him off and several of us decide to walk back. The driver is glad to rush away and return for another fare.

The Chinese are supposedly going to dam this narrow UNESCO canyon on the Yangtze River as part of their 12 dams project. Hopefully not, since the road is something special to behold.

The stanchions holding the chains are quite close to the edge in places and we wonder just how safe it is. It looks as though you could just push one of the posts over. And, up ahead in this photo,  there are guards standing with their backs to the canyon,  making sure no one walks too near the chains. 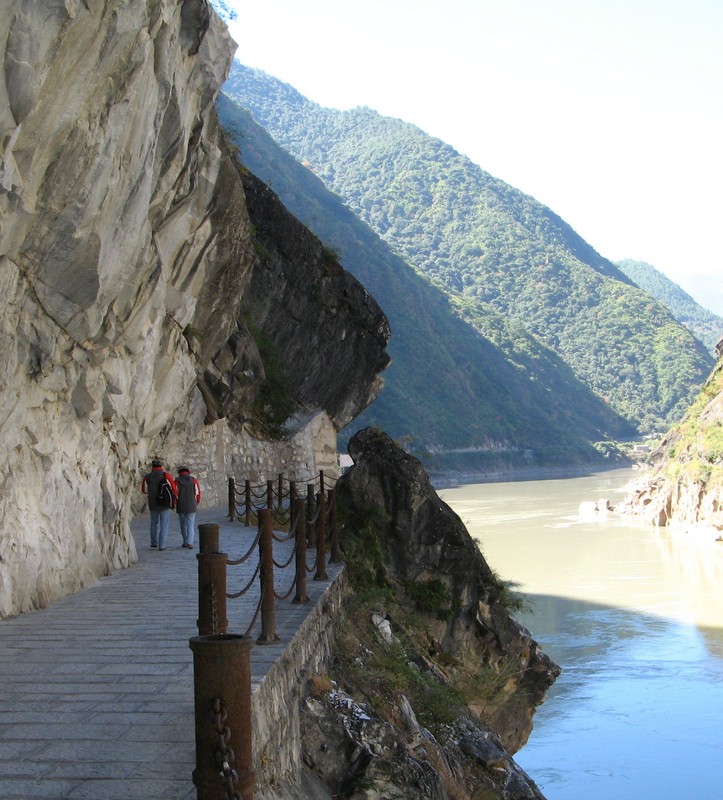 Near the end of our walk, the water is closer to the road. The return trip is down hill.

The scenery is majestic but the road is ever fascinating. 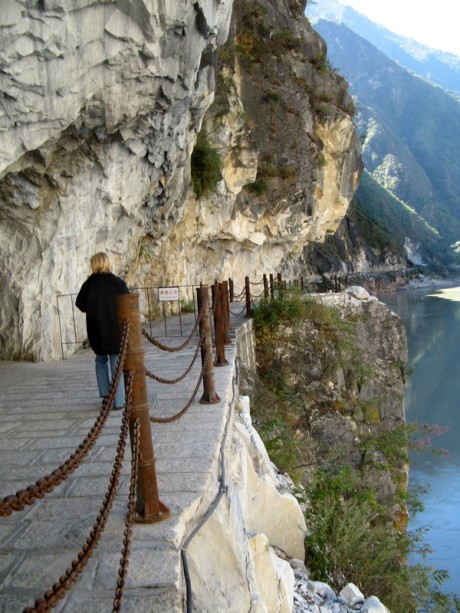 We hate to leave the beautiful canyon and a tour mate,  Joyce, clowns around as a rickshaw driver. We decided this canyon has more beauty than the Yangtze River canyon.

In a recent conversation about UNESCO, my nephew insisted UNESCO was part of the United Nations. It is not. It began because the Egyptians were going to flood some amazing antiquities to build the Aswan Dam. A group formed to raise money and protect them by moving them from the flood zone. That committee went on to protect and preserve many, many places as world heritage sites so important they should be shared and maintained for all people of the world. To read more about UNESCO, click the link below.