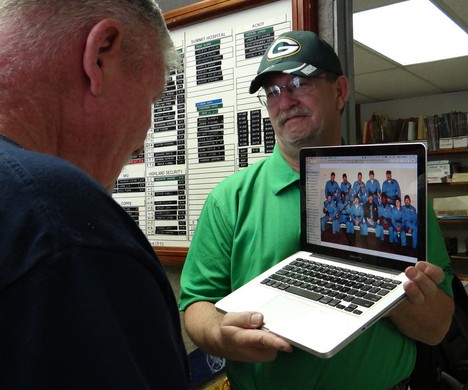 Dale Toussaint, right, has re-energized the Alameda County Sheriff’s Archive. Gary Nelson stopped by and took a shot at identifying a photo Toussaint scanned into his laptop.

Bill Selles and Dave Hoig pondered identities. Everyone who arrived knew everyone else, but some of the guys are new faces to me. 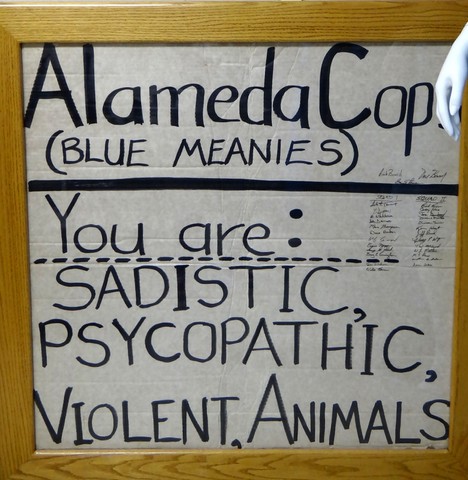 In one of the display rooms is a sign left by protestors during the riots on the U. C. Berkeley Campus. Blue Meanies was a term coined by the protestors given to Alameda County Sheriff’s Riot Squad when they switched from regular uniforms and dressed in mechanics coveralls by request of the deputies. Their uniforms reeked of tear gas from one fracas to the next. Mechanics coveralls could be tossed in the washing machine after each shift.  In fact, the Sheriff’s Department didn’t have a so-called “Riot Squad”. The Civil Unrest that began in Berkeley was the first of it’s type. During worker strikes or mob situations of the 1920’s and 30’s, the deputies waded in and beat senseless anyone within reach,  and jailed anyone who fought back.  The right to civil protest was not respected. Oldtimer, George Wisner, told me the Sheriff’s Department and Oakland Police Department came down hard on union organizers and strikers. It was policy to always take the side of the company. Another requirement of those early times?  You had to be a Republican to be a cop.

Marc Thompson and a bunch of guys from squads one and two signed the Blue Meanie sign. He pointed to his name and I took his picture. 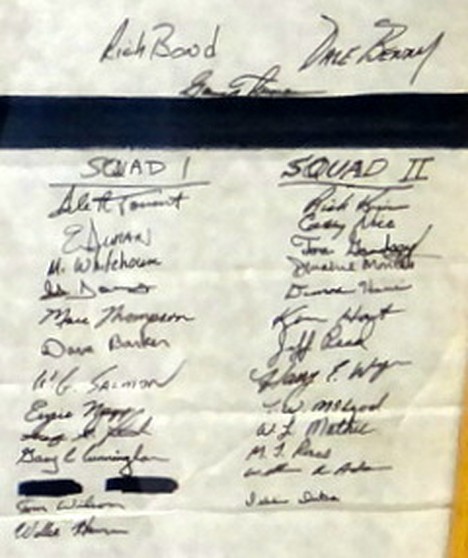 If you recognize your name, come visit and I’ll take your picture with the now famous sign. Well, famous among the deputies, anyway. The riots were an important thing for deputies. They were never paid overtime, and wages were decided at the whim of the board of supervisors. Old Captain Creel would give you compensatory time-maybe. Many deputies worked side jobs to make ends meet. Sheriff Houchins had no choice but to go the board and ask for contingency funds to pay overtime for deputies who were on the streets for 10 to 15 hour shifts while others covered regular duties with equally long workdays. The riots brought wages up to par with the rest of society.

People don’t think they can contribute anything of value to the archive. Behind Dale showing me this picture is a group looking at the Sheriff’s assignment board. We guessed it was from 1994. But the guys knew what year they were assigned certain shifts and they informed us the board was pulled off the wall in 1997. Everyone has knowledge of their time and place and can add to the history of the department in big and small ways. All are welcome on the third Thursday of the Month unless it is a holiday. 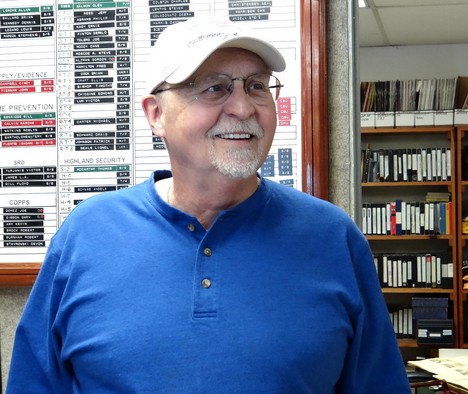 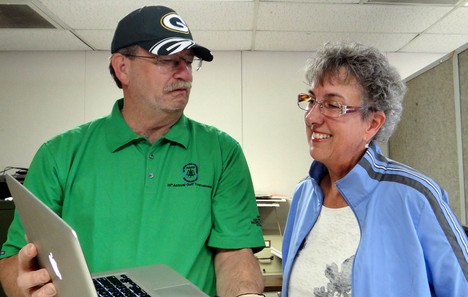 A woman named Connie came in. I thought she might be a retired deputy. 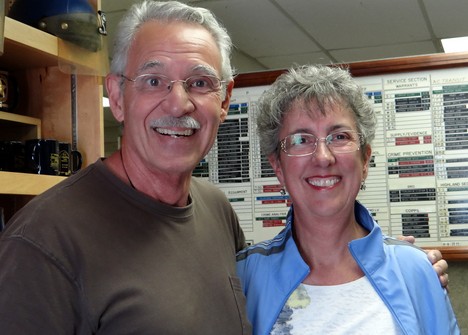 It turned out her husband was the retired Deputy. I didn’t remember either of their names but thanks to Pat Higgins, they are Richard and Connie Krimm. 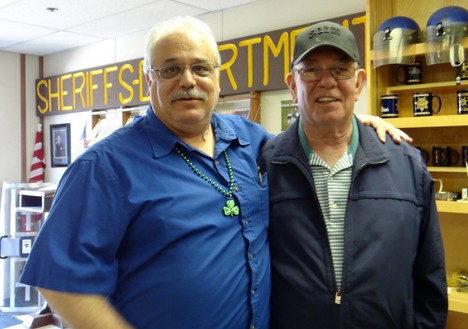 Ralph Streicher, one of the new volunteers, with Bud Harlen, one of the old volunteers. The place was humming. Remembrances of the past were flowing like water along with plenty of laughter.

And part of that hum was a busy Ralph Streicher. He kept saying, “I love this place.” He is the fastest talker I ever met. I know I’ve gotta get him to sit down for an interview some day. I’ve got three promised now. I keep telling myself life is getting easier with age and retirement. 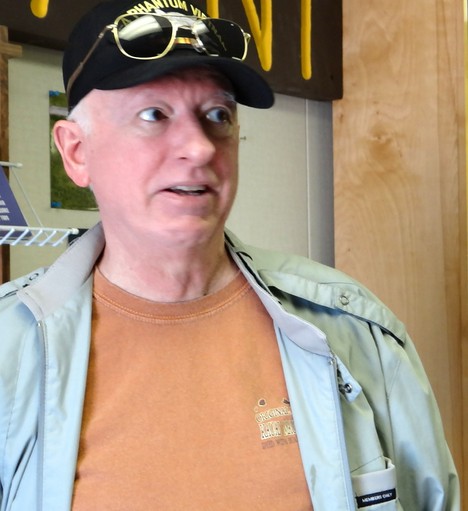 Don’t wait. Get involved. Its fun to talk shop.