Norman Roach is a Lakota/Sioux Tribesman, his native name is To Chase Along. His wife Ramona is from the Dine’ Tribe. He presented her with a beautiful beaded shawl when he asked for her hand in marriage.  She wears it in the first,  traditional dance she did for us at the Cortez Culture Center Amphitheater.   Both are school teachers and they have danced and taught together  for 29 years.

The shawl from the back and a clear look at her headpiece.

I was able to get a picture of Ramon’s beautiful matching boots  because the traditional dance is quite formal and slow.

Norman dances the Grass Dance.  His costume is supposed to represent the life giving grasses that the Lakota People are thankful for. It is an old dance. The grasses fed the buffalo they depended on, until the massive slaughters that were meant to drive the plains Indians to extinction. He reminded us that Buffalo Bill Cody, a wild western hero, bragged about killing 6,000 buffalo in one year, leaving the carcasses to rot on the ground.

Lakota language is not understood by Navajo people.  Navajo has more similarity to Athabascan People who came over the Bering Straits 30 to 40 thousand years ago.  Norman and his  wife studied the history of Native Peoples and interjected a bit of history as they explained their interest in Native Dances, and how they evolved.

Norman dances in moccasins. He plays flute;  songs that are traditional and some he has written. I find a haunting loneliness, like the howl of a wolf whenever I hear the high-pitched flute music.

Ramona played the drum and sang a song about a little goat, and a child. The costume she is wearing is called the  Jingle, Jangle dress.

It is easy to see why it is called Jingle Jangle with tiny metal noisemakers sewn on it.  A modern dance that evolved when a  grandfather dreamed of this costume while he was ill. He asked his family to make the dress and do a dance to make him well. They did, and he got well.

Norman talked about the Hollywood version of  Native American life, how women are portrayed as  subservient to their husbands. In fact, Native cultures revere their Grandmothers. They are the basis of first nurturing and learning and are the most respected individuals in the tribe.  One of his songs was dedicated to grandmothers.  He said only in the movies will you see an Indian covering his mouth back and forth and caterwauling.  He talked about the misnomer, Indian,  to the more accurate identification of Native Americans. Dances are sacred rituals, just as we find music and camaraderie healing and healthful. Then, the pow wows became popular as a venue and now some dances are allowed to be photographed and are public like those he and Ramona perform.

The shawl dance, is controversial. It was the  first dance where the dancer spins around in a complete circle. An energetic dance,  performed by a young woman.  Some of the elders did not like it, but now they accept it. The young have evolved their native dances and they continue to change. Norman quipped, we do not have Indian Dance Classes 101. All are learned from family members. They are invented to serve a particular purpose in their culture.

The Shawl Dance is very fast and as you can see, Ramona’s feet come right off the ground in jumps and twirls.

A good view of the back of the costume.

Norman performed a complicated Hoop Dance that was originally done with a single hoop.

It is a difficult dance, energetic and complicated.

This figure represents the wings of a butterfly.  For the last dance, the crowd was invited to join in a simple round dance which is a very Hollywood ploy to involve everyone, but welcomed by all and quite fun.  Then anyone who wanted, could have a picture taken with the couple. It was a fun evening

Norman’s grandmother was a survivor of the Battle Of The Little Big Horn.  She was five years old.  He is very proud of his ancestry and likes to promote the positive history of the Native Americans that the history books often avoid.

To view more pictures of the dances, click on the following link:
https://picasaweb.google.com/106530979158681190260/201268NativeAmericanDance?authkey=Gv1sRgCOPpytXpkKiCTA
Yesterday, we drove to Mesa Verde National Park to see the cliff dwellings and enjoy the high country scenery.

SOLEDAD IS A PRISON, BUT… 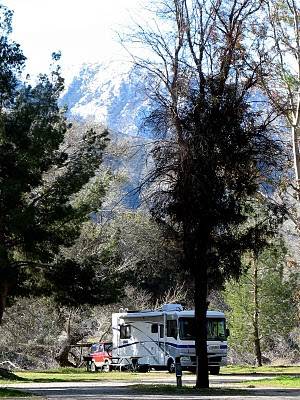 With my Sheriffs Department background, Soledad brings to mind the prison by that name. But, here, at Soledad Canyon Thousand Trails, is the true meaning of the Spanish word, solitude. It fits this quiet, peaceful site that meanders across the Santa Clara River with approximately 800 sites— without feeling crowded. 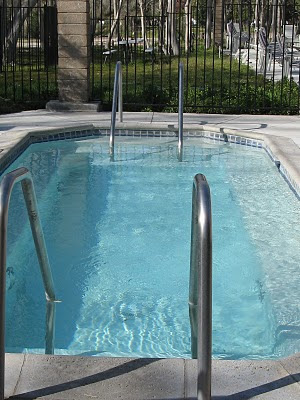 I spent time in the beautiful hot tub. Its cool here, and the pool is closed for repair work. 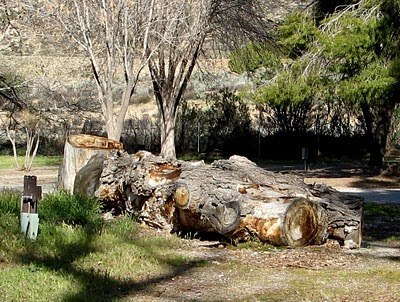 When we move to a new place, it is our habit to walk the park, see where everything is located, and just get a feel for the place. We noticed a lot of tree work going on in several sections of the park. Old giants, laid down for a final rest. 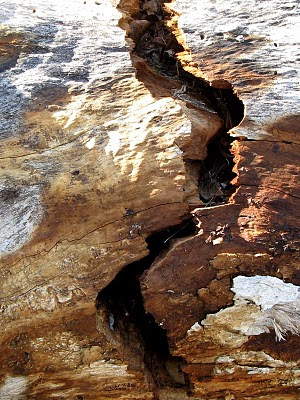 Beauty still, in its rot and decay. 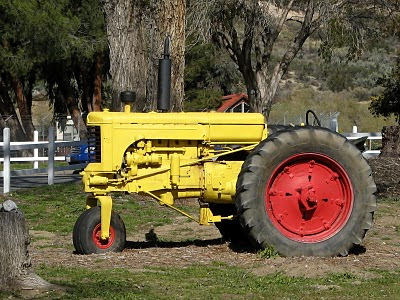 Like all Thousand Trails, they have multiple activities for kids and adults. Tennis, basket ball, several “kiddie”  playgrounds and picnic areas, horseshoes, an arcade, miniature golf, a couple of outdoor amphitheaters. This is the first TT we’ve seen with an old tractor for kids to climb on. 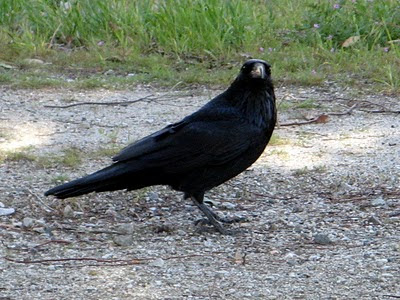 We heard coyotes our first night, but literature warns hikers about cougars in the area. On our walk we saw the fattest crow and a few other birds. In Palm springs our walk around the site was 3 miles. Here, it felt like the same distance with just one circle around the perimeter.
Events here are bus trips into Los Angeles on Thursdays and Saturdays to visit Olivera Street,  the Getty Museum, the Queen Mary, a farmers market, Hollywood, Union Station, Sana Monica, Venice Beach and so on. A continually changing menu of things to see and do.  And, you don’t have to drive.
Planned events at the lodge vary with the time of year. We already see flyers for the up-coming St. Patricks Day Corned Beef and cabbage dinner for 99 cents. The big lodge has a huge dance floor and restaurant.
People come up out of the smog filled cities and can enjoy this restful, peaceful place at Soledad Canyon.