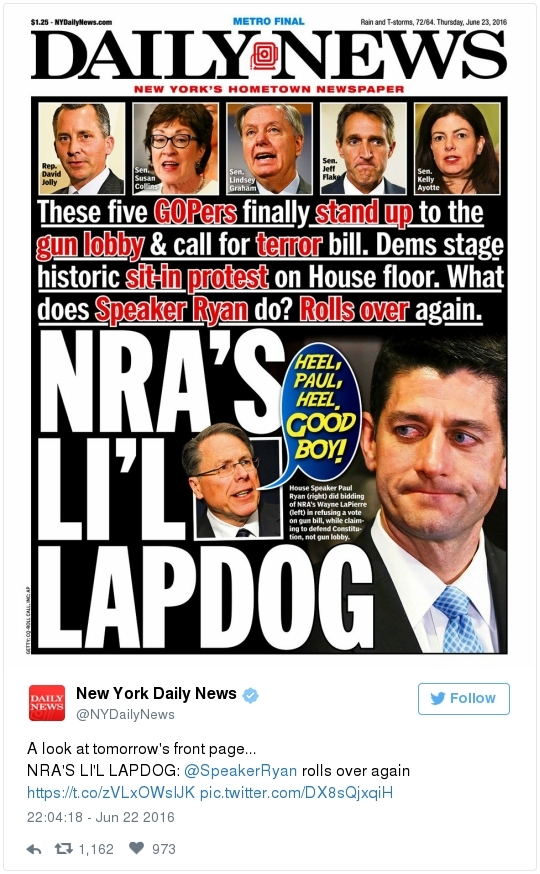 The front page of the New York Daily News called it right.  The NRA is beginning to lose some of its power as they continually sell fear and gun deaths have risen as gun ownership hits the roof. The Republicans refuse to put forth a reasonable gun control law. No one could ever strip Americans of the guns, there are too many out there.  But reasonable control of loopholes could prevent the needless deaths of assault rifle killings. I’ve heard it said that as soon as you ban assault rifles that can kill 50 people in less than 50 seconds, the NRA, the main gun manufacturer, by the way, will find a way around it. Plastic guns. Do it yourself kits, convertible guns. Then it is time to regulate the manufacturer or put them out of business. Their business is profit from killing people. If every bullet made for assault rifles had a 1000% tax, it would reduce the number of bullets some individuals could buy. If bullet making supplies surge, they too must be taxed to match the damage. Make it against the law to buy bullets or guns with a credit card. They must have a check that is held until they are cleared for ownership and until the check clears the bank before the gun is turned over. The same goes for gunshow and on-line purchases. It is always about money.

And what about people like Jennifer Longdon, shot in the spine in a drive-by shooting, 5 months in the hospital, and a T-4 paraplegic. She can move her head, talk and breath. Her care costs $5 million. Why isn’t the NRA responsible for her around the clock, permanent care? They produced and profit from an unsafe product that has no practical use outside of war .

In ten years, 750,000 Americans have been injured by gunshots. And, 320,000 have been killed. Not counting the most recent mass shootings. Twenty thousand commit suicide with a gun each year and 11,000 people are murdered with a firearm each year.

It is insane. I personally know of a young paper-boy who accidentally injured his sister playing with his father’s gun. Life for him, and his family, will never be the same. His guilt was so deep, though his parents and even his sister who has to spend the rest of her life in a wheelchair, were forgiving and understanding. Counseling didn’t help. He continually does self-destructive things, like stealing, getting into accidents, looking for punishment. Tragic.

THE NRA MOST FEARED LOBBY.

The NRA called America’s Alcohol, Tobacco and Firearms agents “Jack Booted thugs” in an ad, causing former President George H. Bush to withdraw his membership in the organization. The NRA was formed to strengthen our militia and helped win the war. After the war they promoted gun training and safety, all supported by government funds.

In more modern times it was the NRA that realized the dangers to society of non-licensed gun purchasers and promoted legislation to license privately owned firearms. They promoted sports, target shooting competitions and responsible gun ownership. Gun ownership was very selective, however. No blacks were allowed permits.

Even after Martin Luther King’s house was bombed, he was refused a gun permit. When he later got one, his house became an arsenal.

Huey Newton and some of his followers hailed the lack of gun control. They walked into a state capitol building with loaded rifles in hand. They had legal permits and there was no law to say they couldn’t do it.  They began following cops around Oakland and policed the police every time they stopped a black man on the street. They would bail out of their cars with guns in hand and shout legal advice to the person being “harassed”. Oakland quickly made city laws to control the Black Panther Party.

It all began in 1977, under Harlan Carter, the NRA turned from a positive force in society to the most feared lobby in the United States. Harlan stated: “Beginning in this place and this hour and this period, the NRA History is finished.” His mantra was ABSOLUTELY NO GUN CONTROL. Period.

The NRA had friendly relationships with the cops, but when legislation proposed a ban on  “cop killer bullets” and assault weapons, under Carter’s leadership,  the NRA was opposed and so it has been ever since. He led a public verbal attack on police leadership and continually bashed the cops.

The second amendment does not confer a broad, untouchable right for personal weapons to the extreme position now taken by the gun lobby.

And, it is now accepted that government is helpless to do anything about it. From a citizens point of view, that is not acceptable.

Does Obama have the guts to change that? Will he be able to change that? Will the filibuster be fixed so bills can come to the floor for a vote? The NRA buys congressional votes, just like other powerful lobbys. What does it mean when a powerful nation like the United States is afraid of the NRA? That is not acceptable.

Gun owners think sensible rules about gun control means yanking guns away from them. Not so. Safety clips on automatic weapons are opposed by the NRA. Selling on-line weapons to anyone is ok. Selling unlimited guns to a family is ok. Selling 15,000 rounds of ammunition is ok. They oppose child safety clips on weapons. Assault weapons that fire multiple rounds a second are extremely dangerous and have no other function than to kill.
Individual protection does not require an arsenal of assault weapons.

The NRA set the table and fed us myths about gun control.  Now it is time to do the dirty dishes. Tell your congressional leaders, enough is enough. Sensible gun control is a must.