Long distance biking is very North American; In the last twenty years bicycling has grown to mega proportions. This Canadian couple, Ollie Ewing and Anna Szkraba pulled into the little city park at Towner where we stayed and I wondered what their experiences were like.

Because they are on bikes, they stop in towns, ask questions, shop for food and a place to shower; they mingle with more people than we do on the same trajectory. They find that people are friendly and helpful wherever they go. They’ve been invited to stay in people’s homes, five times between Ottawa, Ontario and Towner.  Their destination is Vancouver, B.C. They plan to spend a night with friends in Stanley.  Our goal was a to visit Dakoa Drug Store in Stanley where the only working Whirla-Whip Ice Cream machine is still pouring out a specialty treat.   They do about 68 miles a day, more or less.

In the morning, they pulled up stakes and hit the road. We wished each other well, me with a little ache in my heart as I thought of Essya Naballi and Martha Wright and their unfortunate encounter on Highway 101 Oct. of 2011.

We’ll be following them on F.B. Isn’t that cool?

We drove to Stanley and the terrain is changing;  more hills and mining, some oil wells but we aren’t deep into fracking country yet. Stanley is just on the edge of it all.

Beautiful colors of green and gold; a field of winter wheat just threshed.

It seems a strange mix, farming and oil. We and the biking couple have been warned away from Williston where the oil boom is most evident. A city that went from 14,000 to 40,000 almost immediately. High crime and danger is what we are repeatedly told as the reason to avoid the place.  In fact, Stanley City Park where we had planned to stay has been taken over by permanent renters from the oil boom. They hold a few sites open for travelers but we decided to find another place to park. 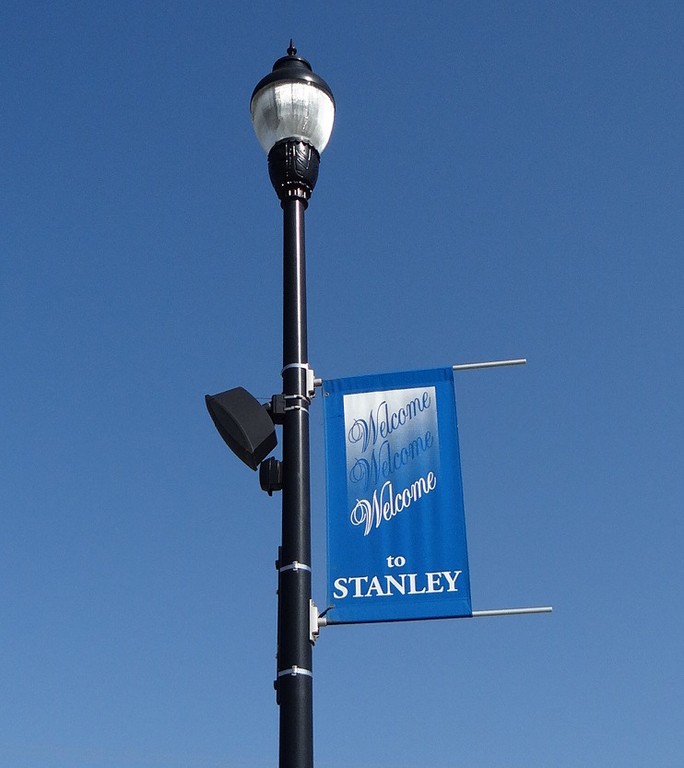 Welcome to Stanley where the street lights have speakers on every pole. Music is piped out to the street wherever you walk, just like elevator music in a grocery store. We thought it was strange.

The Dakota Drug Store fountain to see the only Whirla-Whip machine in the world beckoned.

Terry, the very helpful pharmacist took time from his busy day to take us into the basement where there were probably thirty of the 100 pound machines. The last working model needs rewiring and it will be up and running, soon, he promises.

At the fountain are the new light weight Whirla-Whip machines invented by Claude Reed, who once owned 40 ice cream parlors.  But it was  Bruce Rodenhizer, at this drug store who made them famous. Terry called Bruce Rodenhizer and asked him to come meet us, the former owner now in his 80’s and retired.

While we waited for Bruce, we chose our flavors. The fountain boy told me one guy orders dill pickle, bacon bits and brickle. Hmm. I decided on dill pickle, blueberry and brickle. It was delicious. What Claude Reed realized is you don’t have to have 50 different flavors of ice cream in a great big refrigerated counter, you only need two. Vanilla or chocolate. Then you add the flavors.

Bruce Rodenhizer told us his story. He came here fresh out of NDU at Fargo with a wife, a degree and no money. He worked for two years in Williston, and went into partners in the Drug Store with a lawyer. He was the pharmacist and eventually bought his partner out. The partner wanted to get rid of the fountain and his wife said NO! The fountain stays. When the original Whirla-Whip machines began to need parts, he would  buy every one he could get his hands on to keep them running.

These machines were invented before Dairy Queen and other soft ice cream machines came out.  This machine takes hard ice cream and turns it into a smooth concoction with flavors added. Bruce and his wife and son ran the drug store for 50 years. People still come in and say, “I want a peanut butter on chocolate,” and the fountain person knows exactly what they mean. They bring their kids from miles around to taste an authentic Whirla-Whip delight. Bruce was interviewed by PBS in 1989 during N.Dakota’s Centennial Celebration. His fountain was considered “old Americana”.

The Whirla-Whip inventor, Claude Reed visited the Dakota Drug Store and met Bruce and his Wife after CBS did a program on he and the machine he billed as the only Whirla-Whip machine in the world still running.

Bruce is a friendly, nice guy who was mayor of Stanley at age 31-33. “They practically ran me out-of-town because I spent too much money,”  he said. “Now they thank me for being farsighted enough to improve our infrastructure.”  He is now an ambassador for both fracking and wheat, North Dakota’s two biggest enterprises.

I subscribe to gas.2.0 and always find interesting content since I own an electric hybrid Toyota, and the site covers all vehicles electric and otherwise. On August 4th, he blogged that electric car sales rose 530% over 2012. There are people resistant to the new technology, but other countries have gainfully embraced it.

That said, Nissan, Honda and Toyota have decided to work together and standardize the electric plug for EVs. Next on the list, is standardizing the pumping stations to remove one of the perceived obstacles in going electric.

Now, Gas.2.0 gives information on all sorts of vehicles? The Spyder home airplane is now available in the U.S. in kit form.

Ultralight aircraft manufacturer Greenwing International has just released pricing for its latest all-electric airplane, the eSpyder – and, for just $39,990, you can park one in your garage today. In kit form, anyway.

According to GreenWing’s stated figures, the 32 hp electric motor can propel the eSpyder to maximum air speed of 68 mph. Peak efficiency, though, is found in an “economy cruise” mode that holds the tiny plane at 38 mph, which translates to about 90 minutes of flying time in between 2-3 hour battery charges. Spiffy. Not for me, but, down the line..who knows.  It may be the wave of the transportation future along with driverless cars.

And why would a vehicle site be interested in Fracking and agriculture?  Because we are talking fuel, here. Fracking is touting jobs they can’t deliver and the oil industry is holding onto an unsafe process with a death grip.

American farms are struggling to attract workers. Farmers have jobs, but no applicants – and they concede that the problem is only getting worse as innovation in alternative fuels like ethanol and biodiesel, as well as growing demand for the materials necessary to make plant-based renewable plastic pushes up demand for their products to the point that there are thousands of jobs waiting to be filled.

With green jobs growth out-pacing literally every other US industry, this is a serious problem.  And with a whole new generation of college students entering the arena in the spring, maybe someone should promote American Ag degrees.

Thank you Gas.2.0 for writing my blog today.