With my first digital camera, I visited China in 2006 , when China was in the middle of changing from a Socialist/market economy to a capitalistic economy. As a child, I watched a neighbor dig a deep hole in his lawn. Every few minutes, he’d say, “Look at this?  He’d hand me a penny he’d supposedly found, and tell me “We must be getting close to China.”  He regaled me with fantastic stories about dragons and castles and magic, all happening on the other side of the earth.  Simple things that fostered a dream.

We whizzed through Beijing with 300,000 vehicles in a city of 13 million people. Fifteen percent of families now own cars that intersperse with weird motor driven carts piled high with goods,  and 8 million bikes, motor cycles carrying whole families  and buses and pedestrians all mingling  in a way that you are sure someone is going to get killed at any minute.  I saw a man carrying a baby high above his head as he squeezed between two moving buses. You just have to turn your head away. We stop at Tiananman Square, so huge it defies the camera’s ability to capture it. A flag pole so tall the flag can be seen all over the city.

Just like us, Chinese tourists, something new for China, have their picture taken at their seat of government,  much like us having our picture taken outside of the White House. Sixty per cent of the citizens of Beijing work for the government just like the greatest percent of people in D.C. are under some kind of government employ.

The grounds around the building are beautiful where once there was a forbidding wall around the buildings and the whole city. Chairman Mau tore down the old city walls and built what they call ring roads to replace the  feudal walls of China’s  cities. 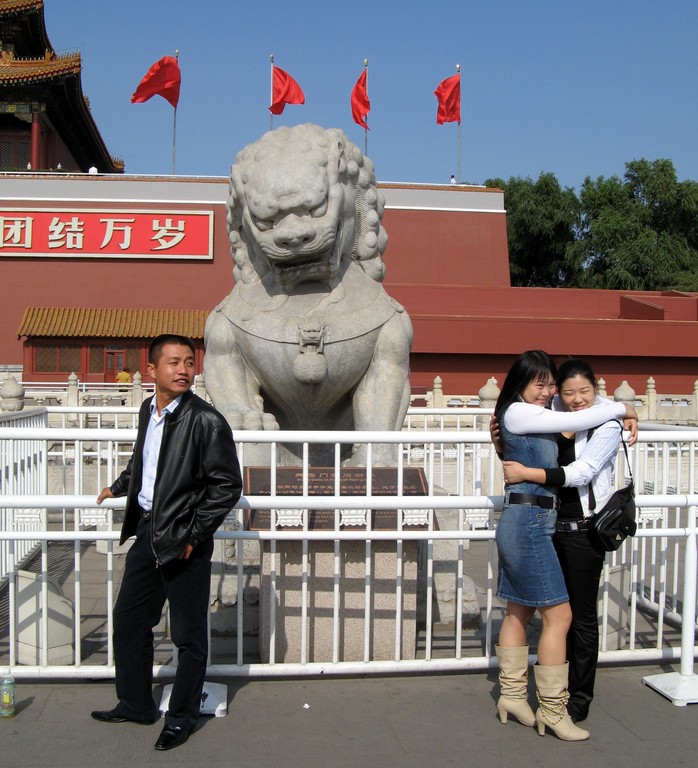 This is “modern” China. We were very quickly dispelled of the notion that we would see Chinese men and women in black sack pants and shirts wearing straw hats. This is the infamous square that led to student deaths in 1989, forever giving China a black eye over their aggressive policies. We are mobbed by vendors selling post cards. Capitalism is grasped very quickly. 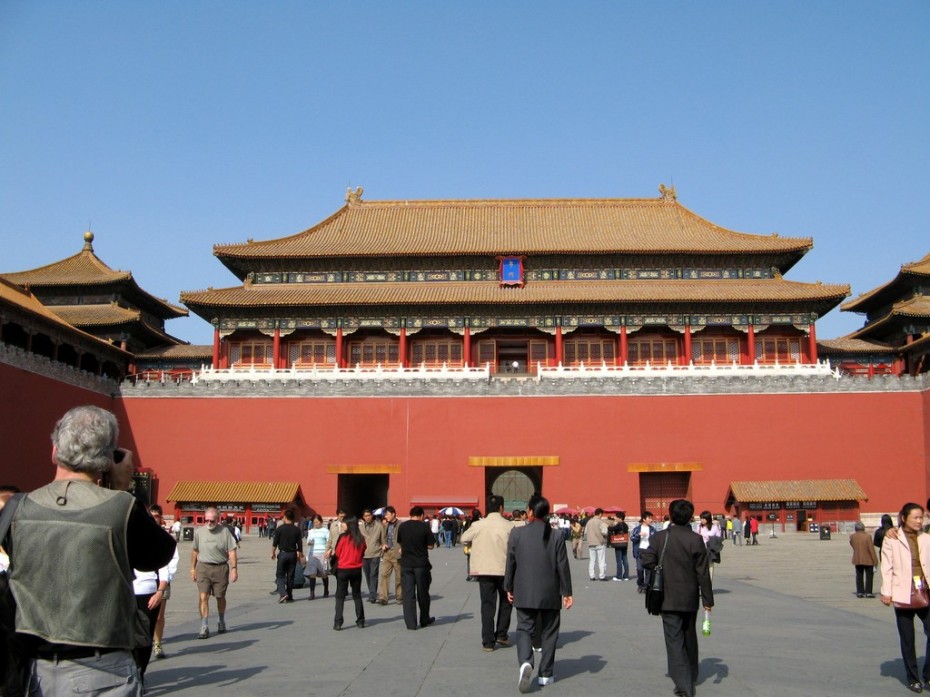 We move on to the Forbidden City which was built, or finished anyway, in 1420. Eleven Emperors  have lived  in this multiple complex of 980 buildings between 1419 to 1911. It has 9,999 half rooms in the palace. Nine is the supreme number. Nine gates, each gate measures nine x nine. Our guide tells us that the Last Emperor,  the movie, is very accurate about what happened to their last Emperor.

This is one of 18 water pots around the square, (a multiple of nine). They represent the 18 provinces. All must be in harmony. 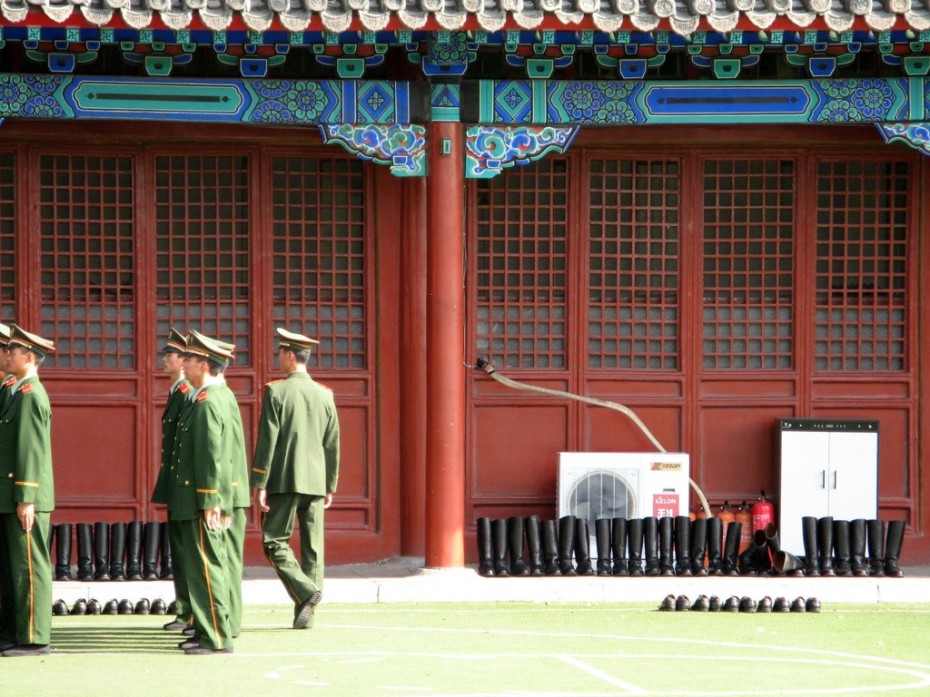 Soldiers still guard the palace and live here. Notice their boots and shoes  lined up next to their “barracks”. The living quarters of the Emperor  is approached by a series of stairs and nine gates to pass through.  Each gate is a palace with marvelous gold, jade carvings, incredibly fancy decoration as part of the building, with real gold leaf.   The rooms that store antiquities are  not lighted, tall columnar rooms, no windows. Pictures don’t reflect  the glorious treasures inside.

It seems as though every inch of the building is exquisitely decorated like this mantel above a doorway. The complex is a UNESCO site. 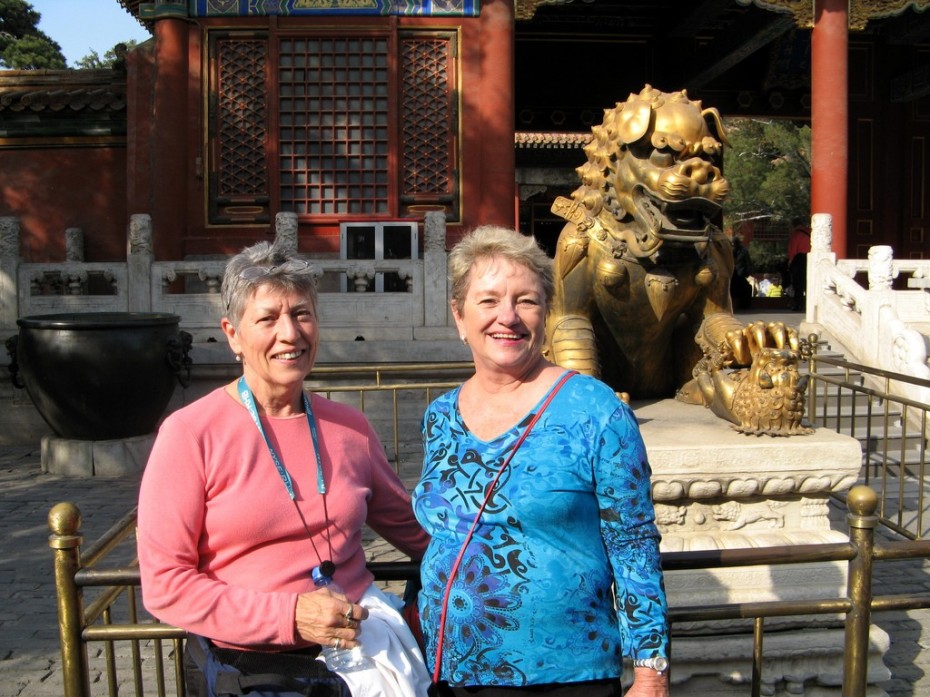 My traveling companion, Michal Houston and I posed before this Chinese guard lion. His left foot is crushing some small creature, I think. 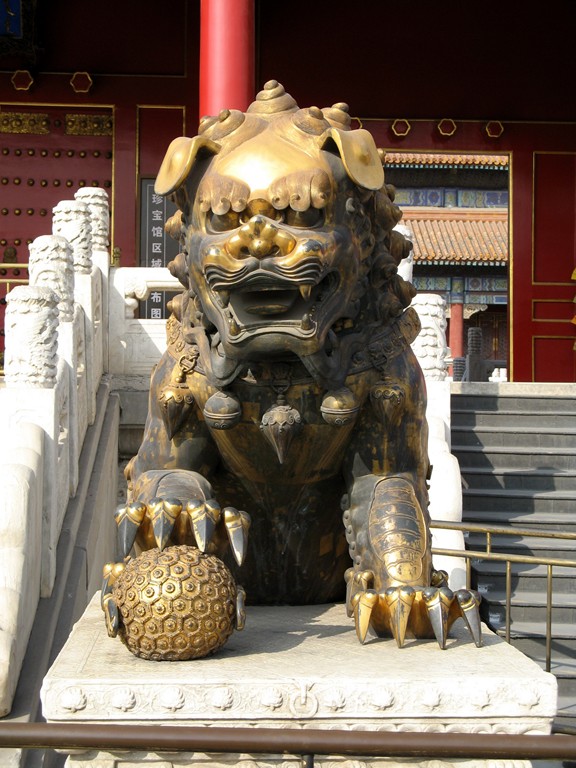 His right foot is balanced on this ball. I’ve forgotten the significance of this stance, and its meaning, but it is the same wherever these lions are seen. And, the dog-like face of Chinese lions was rendered by artists who had never seen a lion. They only had a description of lions from explorers/travelers  who passed through China.  I always wondered about that. Now I know and so do you. 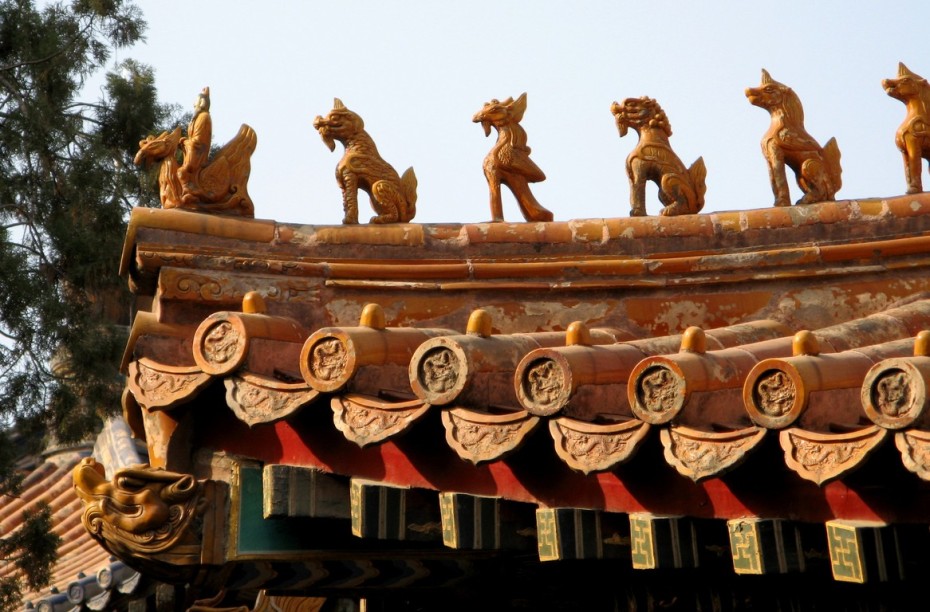 The roof of the palaces are  protected, as you can see. It seems a bit strange to us that the superstitions of old are still, if not believed, at least respected and revered. Visiting China  helps to understand many mysteries about the Chinese people’s beliefs that hang on.

This little boy knows nothing of the Ming Dynasty, 1420 to 1644 or the Ching Dynasty, 1644 to 1911, or the turbulent  history of  the gate he is crawling through. Notice you step over the deep thresh hold as you move from one gate , then palace,  to the next.

And I got to see many dragons. This gives you an idea of the size and scope of these carved wall panels, nine of them in all.

Aren’t they gorgeous?  They are depicted along the walk to the Palace of Tranquil Longevity.

We see so much, it is difficult to take it all in and remember it all. The Palaces all have beautiful names, like the Palace of Heavenly Purity, and so on.

Bellagio’s idea of a botanical garden is nothing like one would expect. Its themed, and though they advertise 7,000 plants and trees, they may only have about 50 different varieties. Not that it matters, the beauty of this garden is because of its themed “props”, which, by the way, change over the seasons and years. You enter facing this colossal Chinese emperor or Mandarin surrounded by the gardens and the sails of a Chinese junk in the background.

It has much of what you would see in an imperial garden and many themed items you wouldn’t see in a Chinese garden, such as these wonderful bunnies cavorting around under the giant mother bunny actually alive with plant life.

The Chinese Junk sits in a koi pond.

Shallow water allows you to gaze with fascination at the colorful fish swimming in view.

In china, gardens like these were built for the wealthy with much consideration for balance and beauty and longevity. Women, with their bound feet, were often confined from the rest of the world and only had their gardens to walk in and enjoy. Thus the views were varied as much as possible.

The props included some credible likenesses of the famous clay soldiers discovered in modern times. When I visited China I learned that each clay soldier was modeled after a living man, thus all the faces are different. An incredible, wondrous feat. When in Vegas, don’t miss the Bellagio.

The lobby and entrance to the hotel continues the Chinese theme. Behind the check-in counter are these larger than life “boys”. 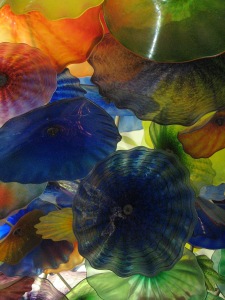 We sat in an opulent lounge, and enjoyed a drink while waiting for the Bellagio water fountain display to start outside of the hotel entrance. The entrance has two Chinese lions.

When in China I learned that the now famous pug faced lions were drawn and sculpted by Chinese artists from a description brought to China by explorers. They had no idea what a real lion looked like. They incorporated the fierce beast into their own culture though there are no lions native to China. 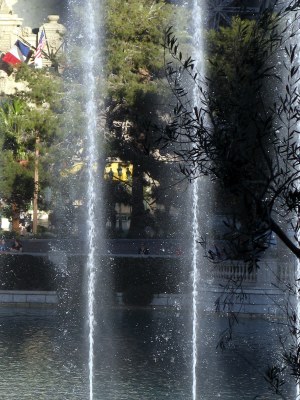 A lovely lake in front of the hotel entrance gives a beautiful view of the surrounding casinos. The water begins, to music, with lights, in gentle spurts.

Soon a fusillade of water commands the view…

Then it whimpers away, making its own rainbow in the afternoon light. Its worth seeing in the daylight and, again, at night with the lights. Such beauty.