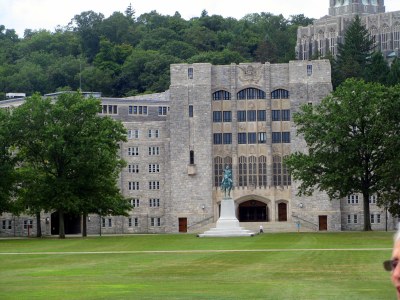 West Point, since 911, is very secure. The only way to tour is through a tour company. The bus stops at the points of major interest. Here is the General McArthur building, joined with other famous buildings named after other famous generals. Significant here is this parade field where the cadets throw their hats up into the air after graduation. Local children are allowed to pick them up off the field as souvenirs. Often cadets put inspiring messages in the hats for the kids. Besides being a famous general, who got fired by Truman,  McArthur became the superintendent of West Point and is remembered here for the fact that he got rid of hazing.

The history of this site, which encompasses 13,000 acres, precedes the academy which opened in 1803. A fort stood at the strategic narrows of the Hudson River preventing the British from bringing supplies in. The young colonies blockaded that narrows with a chain pictured above. The chain was eventually melted down but they retained 13 links, one for each colony, which sits above the spot on the river today. 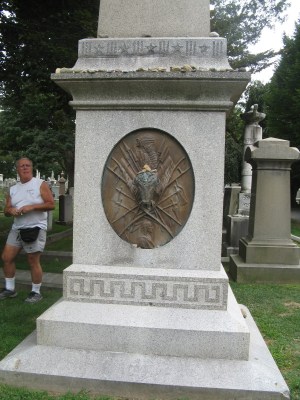 We visited the cemetery where so many famous people we know are buried. Above is Custer’s Stone. His wife fought for many years to get his remains moved to West Point after the disaster at The Little Big Horn. Congress finally relented. People put stones on graves here because they are more lasting than flowers. You can see them all over his headstone. 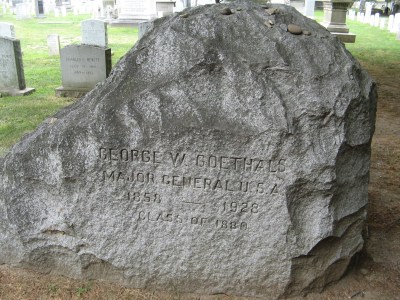 George Goethals wasn’t a famous general, but he was famous for successfully building the Panama Canal. West Point, until more recent times, only had one major, engineering, the only college of its kind. It turned out 45 per cent of the generals in World War II. West Point is about excellence, honor, duty, army, dedication and it takes a strong commitment to make it through the top college in the United States. (So voted this year.)

It now has 40 majors and its largest enrollment in history. 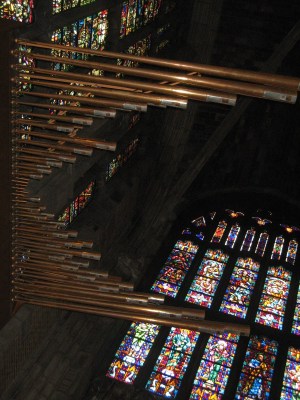 We visited the current chapel which has the largest organ in the world with over 23,000 pipes. From the small trumpet bells above to others that stand ten feet tall and 30 inches in diameter. This chapel has plaques on the wall commemorating some famous West Pointers. Hidden off in a corner is Benedict Arnold. It was controversial to place his plaque at all, as one can imagine.

There are famous dropouts as well.  But one, you’ve heard of Whistler’s Mother? Whistlers father has a story. He designed a bridge and drew two children on the bridge. His design was rejected. He was ordered to take them off the bridge. He erased and drew them under the bridge fishing. He was ordered to get rid of those kids. He drew two small tombstones on the banks. They decided he wasn’t West Point material.

West Point material could be seen about campus with parents, brothers, sisters, grandmas and so on. Family visiting week had just ended and cadets were happily showing their relatives about campus. 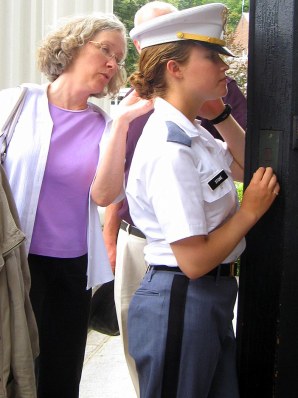 If you visit, the tour involves a good bit of walking. The West Point Museum is just off campus and is free. It has a history of war from the Roman times forward. And, it has a comprehensive collection of small weapons throughout the ages. 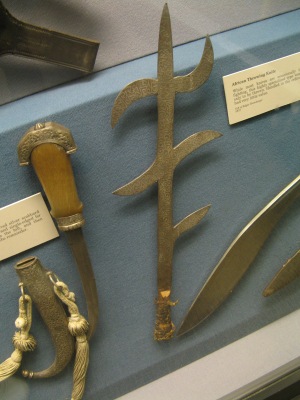 The rifle below is eight feet long. 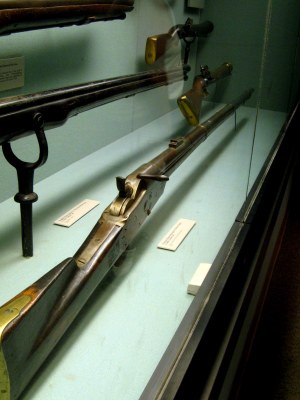 As usual, too many pictures can be seen at the link below:

Once You Go Here, You Never Forget It!

It’s the Gettysburg National Military Park in Gettysburg, Pennsylvania. The battle lasted from July 1 through July 3, 1863 and according to official Army statistics…51,112 died, wounded and missing in the three days of battle!

I was last here in the year 2000. Since then, they’ve built a new 20,000 square foot visitors center/museum that opened in 2008 to better handle the 3,000,000 people who visit here annually. I don’t want to hurt their feelings, but I liked the old museum better. I might have enjoyed today’s visit on a Monday more, if it wasn’t for the many hundreds of high school students running wild on a field day trip. It got so crowded on occasion, I felt like I was leaving a baseball game at Yankee Stadium!

First we sat through a very well done 30 minute film done in a mini I-MAX theater style. Then we were herded into the Cyclorama which is a 360 degree painting, 26 feet high, 377 feet long and weighs almost 6,000 pounds! In the Cyclorama they presented a 15 minute verbal/visual presentation of the battle. After that we spent 2.5 hours in the museum with the many hundreds of wild high school students. Sadly I saw only about 10% absorbing anything from their visit there…they seemed to more enjoy yelling, screaming, running around and talking on their cell phones. So much for today’s high school students! Then to the Gettysburg National Cemetery, site of President Lincoln’s Gettysburg Address on November 19, 1863. From there, since it was raining, we took the Bronco and toured some of the actual battlefield sites.

Back to the motorhome for a late lunch. Then Mary wanted to visit the nearby Eisenhower Home/Farm. Back to the visitors center we went, bought our tickets and boarded the cattle-car-like tourist bus for our trip to the site. It wasn’t spectacular…just okay. It reminded me a lot of our visit to the Lyndon B. Johnson Ranch in Texas last January.

Brother against brother as seen as part of the Cyclorama.

Just a few of the Union Soldiers.

The Eisenhower home was situated on 189 acres a short distance from the Gettysburg Battlefield.

To see the other 70 photos I took, click this link…
.http://picasaweb.google.com/jimjrver/GettysburgNationalMilitaryPark051710#

All in all a very nice day. Gettysburg awakens ones emotions!
Today we continue our journey in a Northeasterly direction.