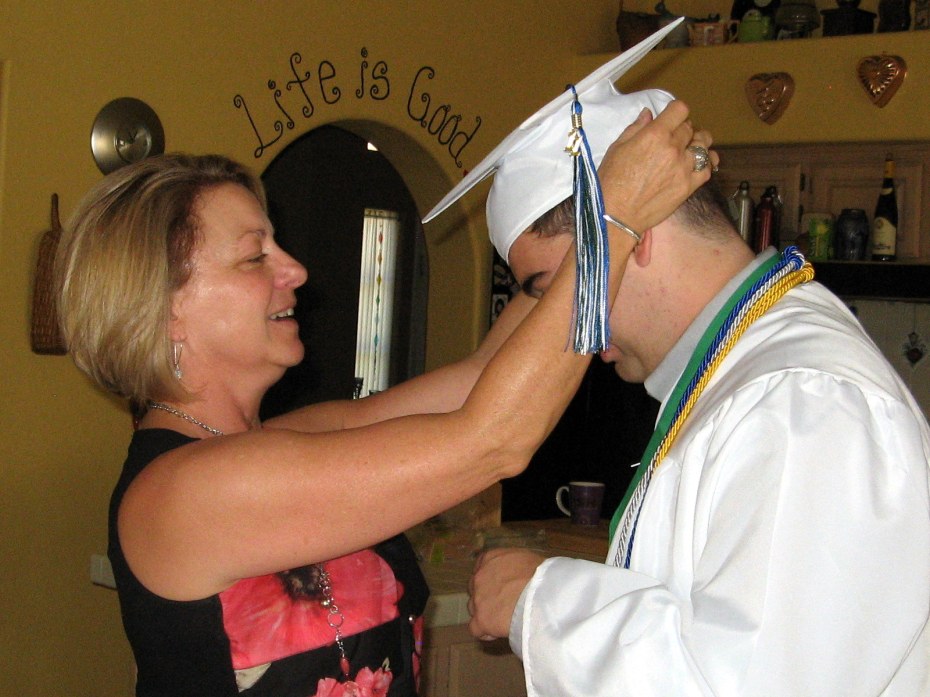 Stewart Holden Matzek graduated with honors from Green Valley High School yesterday. He got dressed at home for a few pictures before leaving for their practice. Mom adjusted his cap and tassel.

Laurie says:  “Stewart is sooo ready for college.”  He will attend University of Nevada Reno as an English major.

The honors students are awarded this metal to wear with their cap and gown, and also an honors rope and hood for advanced and high honors. 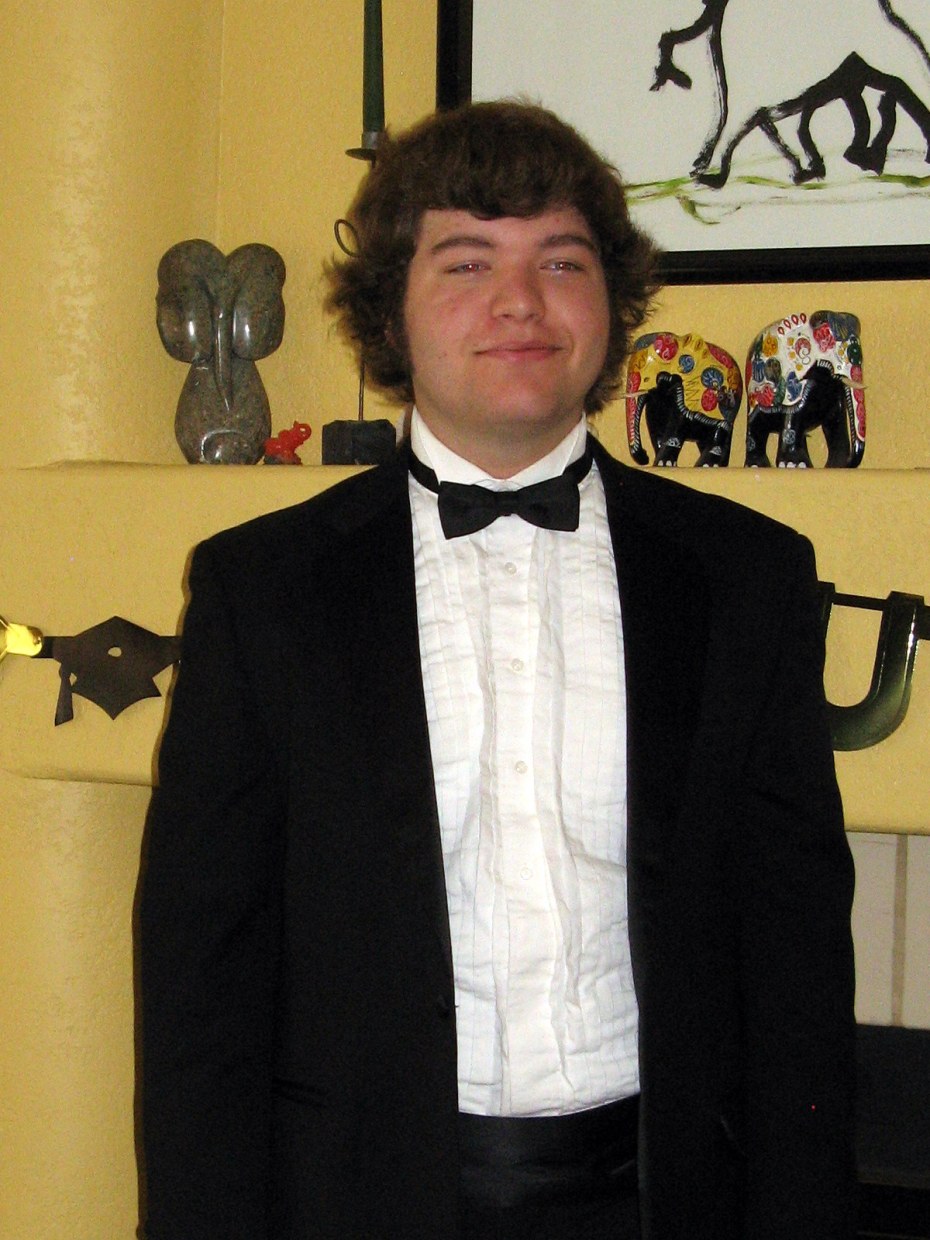 Stew’s younger brother,  Mason was dressed to the nines in his tux since he plays for the high school band.  Both boys went ahead of us to the Thomas And Mack Center, a huge auditorium where many graduations are conducted this week. Weather was in the triple digits, typical for Las Vegas, and graduating ceremonies outside are out of the question. 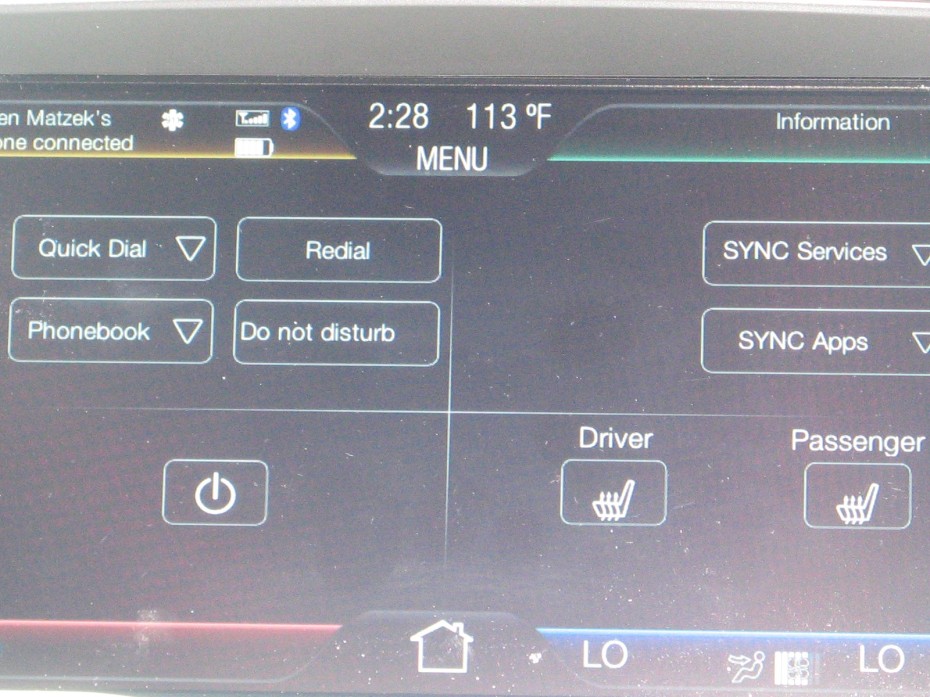 The temperature on the dashboard reads 113 degrees, but Ken claims it isn’t that hot. The temp plate is simply in the direct sun on a black car. It was only 108.

Stewart paraded into the auditorium with the rest  of his class of 647 graduates.

Taking pictures in this immense room is difficult but they have television monitors just like they do for sports events which guarantees every person in the building gets to see the action and spot their own kid or grandson.

I managed to get a shot of brother Mason playing Pomp and Circumstance with the band.

And, one of Stewart singing in the choir in his cap and gown. The words to the song and the kids speeches were scrolled on the teleprompter for all to see. 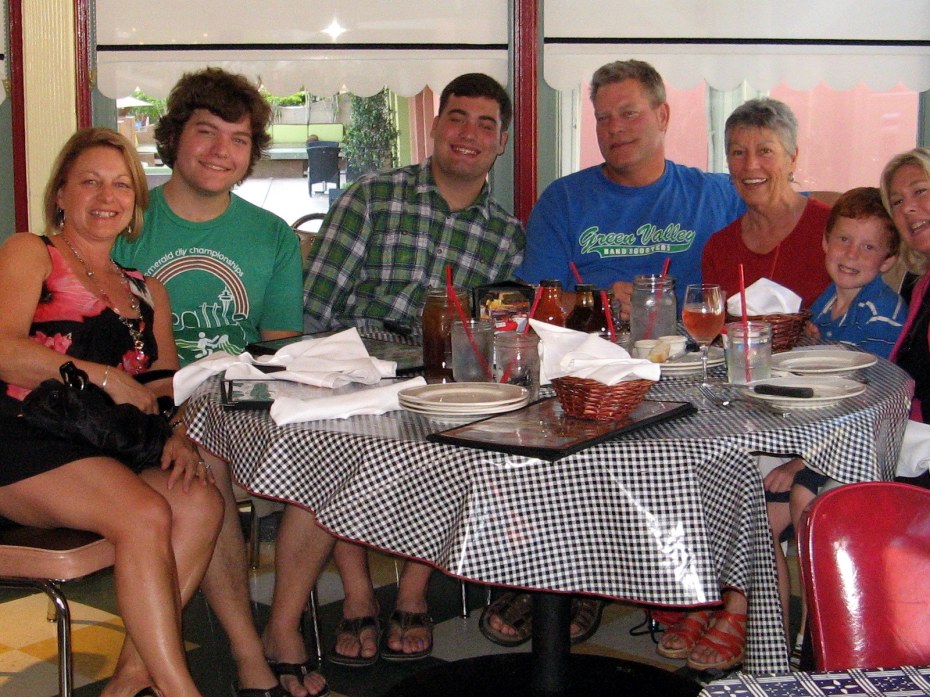 After the ceremony, the kids were glad to put aside their regalia and into casual clothing for dinner out with the family. We discussed the difficulty of managing a ceremony for such a huge class and the efficiency with which it was accomplished.  The speeches were short and good. Green Valley High School is rated one of the best in the U.S. and graduates 91% of its students.

Then home for dessert and the chance to study that all important diploma.

Stewart opened his gifts and cards. The most important words of wisdom I brought back to share from this event are these:  “Don’t let any one tell you what you CAN’T do. Only you know all you CAN do.”  It was an eighteen year-long  journey and a new one is just  beginning. Stewart, your family is proud of you and very happy. Congratulations.