The setting was anything but ghostly and I’m a major skeptic, anyway. Calaveras County’s old courthouse and jail in San Andreas was a temporary home to wild and dangerous characters during the gold fevered 1800’s. Here, members of the historical society gathered sociably for wine and beer before dinner in what was once the jail yard. 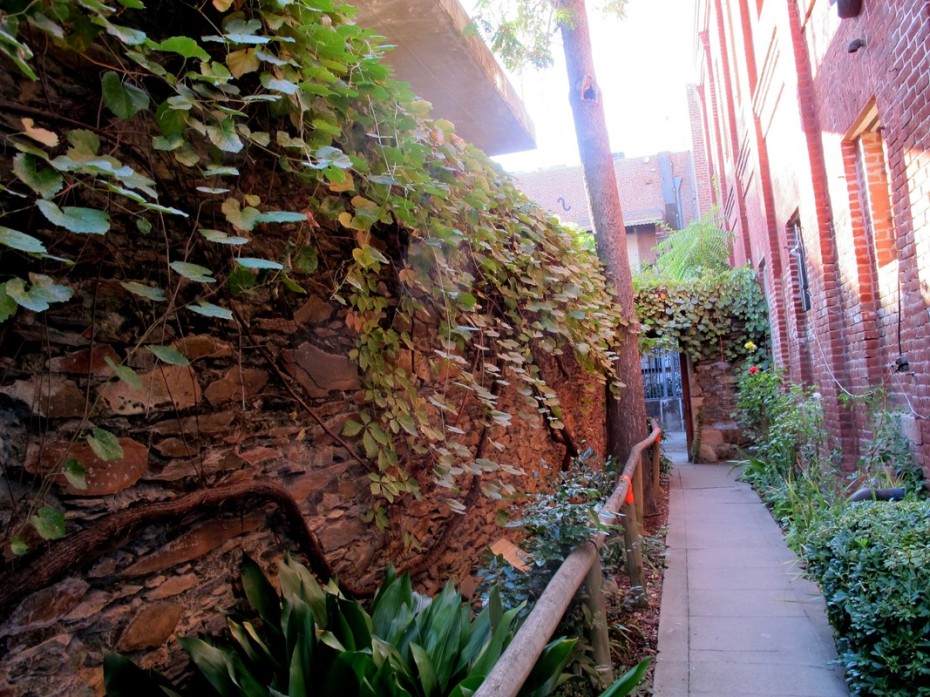 The walled yard is made of native stone, mortarless, and is called dry wall; now over-grown with vines, and beautiful. I spent a lot of time here when I wrote historical features in the 1980’s. Black Bart, the  infamous poet bandit was kept in the jail.  And judge Gotttschalk committed suicide inside the courthouse. Tour guides point to blood spattered books in the law library from his suicide. The building has  been declared haunted by people who have worked here over the years.

Records indicate several inmates were buried “behind” the jail. No one knows whether there was a body under a broken headstone left from 1882. The top of the stone was missing and then rebuilt from pictures. The first court house was a tent. The second one, made of wood, burned. The fine old brick building is too small for a modern court and has been turned into a showplace museum by the Calaveras County Historical Society.

The Historical Society removed an unused public oven from the gold rush town of Calaveritas in 1994 and rebuilt it in the courtyard. Community ovens were made from native stone and held together with mud from heavy clay soil. Ovens like this one hold up well if covered over by a roof. The oven has drawn members to meet in warm months outdoors for pizza, home-baked bread with a salad pot luck, or chicken bargeques. It takes about three minutes to cook a pizza in this oven and they are delicious.

I sat with Sylvia and Cliff Edson, a local restaurant owner who just bought an old Victorian and is restoring it while living in it. They are dealing with ghosts, or several spirits in their house. Sylvia gets frightened by them. Cliff has had the house blessed several times, and is a believer. They don’t upset him. They were stunned to find out the subject of the meeting was The Paranormal. They hadn’t read the notice about who the speaker would be.

I have no idea how many pizzas Clyde Weddell made that night. He made three types, sausage, pepperoni and pesto with sun-dried tomato.  Absolutely delcious.

When Clyde makes pizza, he tosses it into the air. I was never quite able to catch the pizza in the air, but it was fascinating to watch him work. As it got dark, he donned a headlight.

After dinner, we listened to Rick Panzarina talk about debunking and validating ghosts, or paranormal presences in old buildings, businesses and private homes. He turns most of the seekers away, after determining they are only interested in sensationalizing their claims. He says, a good ghostbuster doesn’t  ask for money to investigate your ghost because then, they would always find a ghost.  He uses lasers, 11 cameras, video equipment, and high tech sound equipment. He gave results of having investigated the ghosts in the Court House and other places where he has found evidence of paranormal activity. The blood on the books, if it is blood, did not belong to Judge Gottschalk.  All he had to do was look at the date Gottschalk killed himself, and the date the books were published to know the “spatters” couldn’t have been from his death. He could find no para-normal activity in the Courthouse. He explained in detail how wooden floors make popping sounds that closely resemble footsteps. He and his team of seven people do not allow whispering. They address any presence in a loud voice and ask it to declare itself. They got one very clear “Hi!” Once, out of about 50 buildings. They do not play to sensationalism. Some people would rather have their “fun” reputation than have a ghostbuster disprove any paranormal activity. And, for tourism in the Motherlode, that is quite all right with the locals. Almost every old hotel in the area claims to have a ghost. It is soooo fun!  I’d love to have a ghost in my house. Wouldn’t you?