Yesterday, I went to my friend Anne Williams’ Inurnment. I always carry a camera and I took pictures of the event. Loaded them into my computer and erased them from my camera last night.

I had been promising myself to get rid of 18,000 pictures I have on my computer with the idea to unload some storage space and speed up my computer. I thought I would erase the back-up file. Unfortunately, it wasn’t a back-up file.  Everything I hadn’t already loaded into a cloud album disappeared.

No pictures today, just curses, and sad regrets. That’s what happens to people like me who aren’t  technically sharp. One can never recreate an event. My apologies to Anne’s sons, Bill and Steve, Tyna, her caretaker, Mr. Donlevy from Elks Club, who often helped Tyna with mechanical problems, Steven, a friend, who played guitar and sang Country Roads, a song Anne and her husband, Fred, both loved; Lonnie and Bart, who helped Anne and Tyna with their vehicles, drove them places, and gave so willingly of their time; several friends from the Tuolumne County Museum and Genealogy society where Anne volunteered for 20 years, Mike who brought his elderly mother, a devoted friend who braved the cold, and ice to attend; and Mike, who wrote a poem about Anne. I didn’t know everyone who attended nor get everyone’s name,  but her reach to young and old was touching. She was a young 89-year-old.

Tyna brought to the site a picture board, and displayed her favorite books, some from childhood, and a favorite bracelet that had been stolen from her and returned. Some ceramics she made, a quilt she made, paintings and drawings she did. All things representing her many talents and personality. It was lovely.

ANOTHER USE FOR A PHONE.

My son Ken rolled into Murphys and took me out to dinner last night at the Italian Steak House. They had great menu choices, though neither of us eat steak. He and his wife do meatless Mondays and are very health conscious eaters. Ken has never been on any prescription medicine. 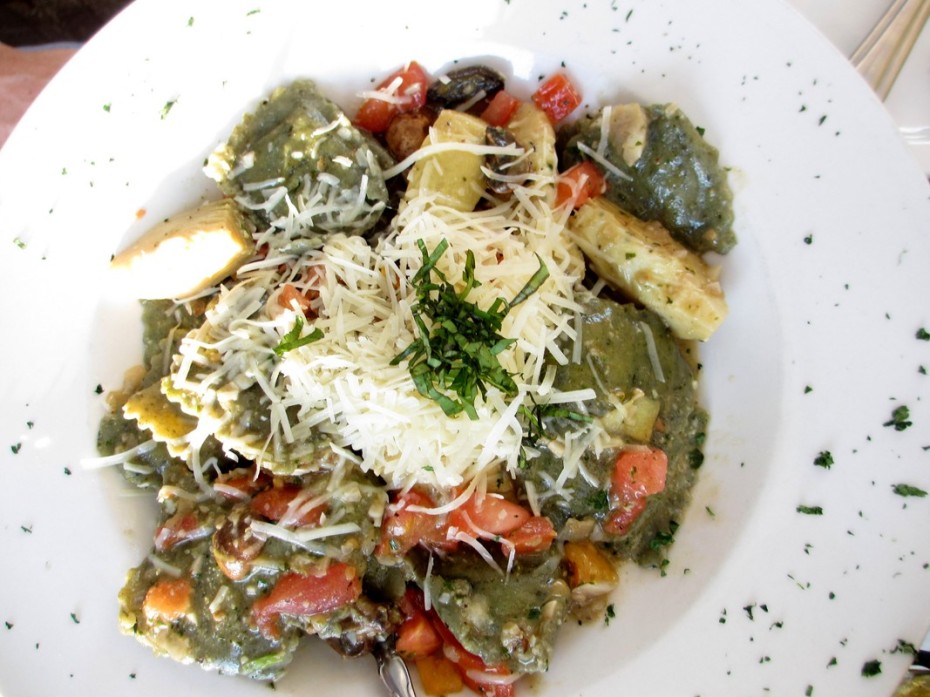 He choose the pine nut and mushroom stuffed ravioli with crimini mushroom sauce and  cheese.

I enjoyed chicken picata and must say, the Steakhouse has wonderful food if you are visiting the area. Great choices. I can remember when you couldn’t find a decent restaurant in the whole county, so it is a treat to have nice restaurants in town.

His visit was just for the day. He got up about 3:30 this morning to go jogging. He plugged in to listen to music on his phone while jogging.  He came back and said, “I forgot how dark it is on a country road without street lights and no moon. I had to use my phone for a flashlight and light my way in the dark.”  My laugh for the day.  He’s turned into a “city boy”.

My road is full of potholes and forced him to walk instead of jog, and enjoy the fresh air and the dark. The dark is seductive and moody and enjoyable, to me. I like getting up in the middle of the night, on occasion, step onto my porch and just listen to the night sounds.