That first snow, at 5:00 a.m. surprised me. I’d never seen it that deep in Murphys. I wished my old friend Buster Reidel was still around to confer with. He would know how unique is was or wasn’t back to 1920. He used to advise me not to plant my tomatoes until after Frog Jump. He was keen about local weather patterns.

Tree limbs bent over the roof and over the railing.

The small wires that hold my summer shade cloth were totally encased in snow.

It made for some pretty pictures.

My housemate, Karen’s car, isn’t garaged. After a lot of melt, she braved the first day, and got out to the store for cigs. you can see where she was parked. Coming back was a different matter.

She was all over the driveway getting back. But, it was a smarter choice because that partly melted snow is now ice.

When the power went completely out, it was still light outside. People up here know to have a good supply of candles and flashlights. I covered the end of the table with an old tablecloth and set up the outage. I placed candles in strategic places in each room. We ate soup and bread for a light supper. People in the east probably chuckle at our unpreparedness for snow, but we do know how to weather a power outage.

Christmas morning, Theo got up, opened his stocking and found a book. He plopped immediately to the floor engrossed. We had to shovel him out of the doorway. When everyone was up and had had breakfast, the kids were allowed to open their presents. Having stayed with them a couple of weeks ago, I heard all of the stories about how they guess what their presents are. “You always buy us Lego, Gramma, one shake and we know what it is,” I was told with a smile.  Then Owen confessed to the real tricks. Dousing the ribbons with catnip so the cats would tear open the wrappings. Slitting the taped ends with a knife and peeking at the ends to read the box, then resealing;  pressing the paper tightly and try to read through it; measuring the boxes and comparing those measurements with their favorite toys in the store. Oh, they are clever.

This year, I told them they could shake, rattle and roll and they would not be able to guess. Owen opened his big box, failing at many guesses, to find:

…another box. After five boxes total, he discovered an Ipod. It measures about two inches square.

Theo guessed his gift as a puzzle.  I told him  it does sound like a puzzle but that is not what your gift is.  When he opened it, attached to the puzzle was a note telling him where his gift  was really located, under a quilt, in my office. A Lego game.

I fooled them this year. I’ll have to get smarter by next year.

For Christmas dinner we had five pheasant and two ducks that Ken hunted with his boss.  With a paella salad, and a green salad, we feasted.

When it got dark,  the guys lit the Christmas Tree. The kids played with their new toys and we talked and snacked until 11 p.m. Ken brews his own beer, some of the best he has ever made.

I thank you all for visiting my blog and hope that you’ve had a good year and an especially Merry Christmas.

IT WAS A DARK AND STORMY NIGHT 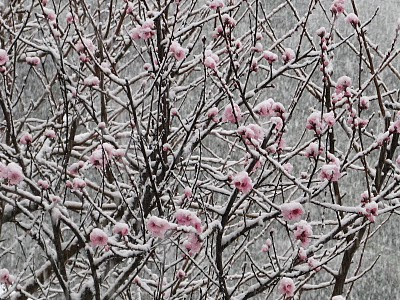 It was supposed to rain all day yesterday. It didn’t. About 2:00 pm it began a light rain that quickly turned into snow. The pink blossoms of this apple tree are covered with the white stuff. Pretty! We can’t really complain when we compare to hard winter climes, I suppose. 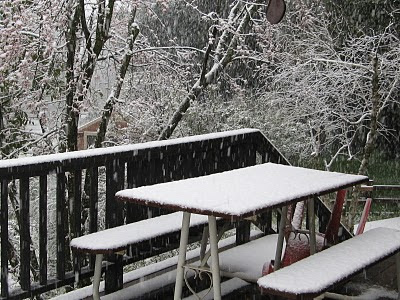 Snow here usually melts away before you can get out the shovel. I expect it’ll be gone sometime today. But, that isn’t a certainty. What we all look out for at oak elevation is tree damage since we are supposedly below the snow line and above the fog. Definitely above the fog. But, snow kind of wanders. Some oaks retain leaves, the live oaks. A heavy wet snow can break branches, and with saturated soil, topple huge trees. 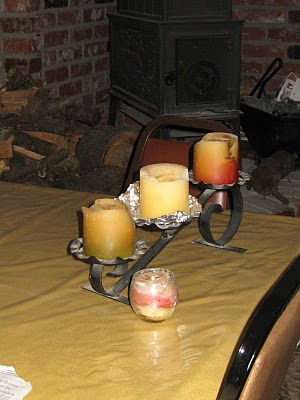 As evening commenced, while reading, the power went out. Without even a bit of ambient light from a clock, or an electronic device, it was like being trapped in Mercer Cavern. I carefully felt my way to my purse that I left in the dining room where I have a tiny flashlight.  I have  flashlights strategically placed near beds in the house. Kind of makes me think I need one next to my favorite chair. Got the matches, lit the candles then read by flashlight until 8:30.  It was, as Snoopy writes, “…a dark and stormy night.”  This morning, the snow is still on the ground. Not looking good for the celebration of Irish Days downtown later today. I’ll keep you posted on the Irish.