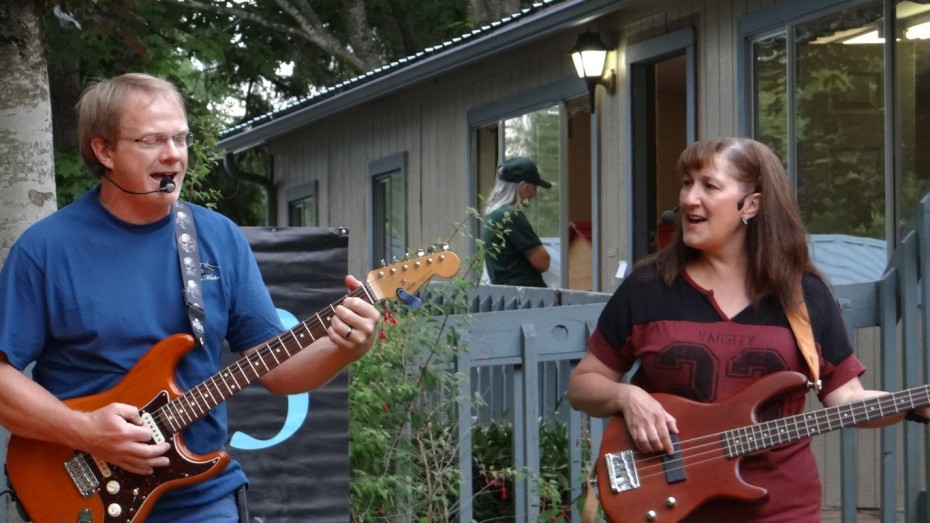 With the special effects of electronics they can sound like just about any musical group you have heard before. With a wide repertoire, they had something for everyone, from Jimmy Buffet’s Margaritaville, some country, Nancy Sinatra’s, Boots, Franks, Something Stupid Like I love You, to some hard rock numbers, and fast dance numbers like Big Wheels Keep On Turning, Rollin’ On The River. I don’t have a good enough memory to cover it all, except to say, it was very enjoyable. Last year at Thousand Trails Palm Desert we heard one of the worst musical couples where most people walked out at the intermission. So, it was a happy comparison.

T/3 stands for Troy, Tyra and their little dog Tinkerbell. She has a great, strong voice that can growl through the rock numbers and caress the softer music while Troy is a whiz with the special effects. We didn’t get to meet Tinkerbell.

It was light out when they started playing, but by 9:00, the sun put on a beautiful display over the roof of the lodge.

Yesterday and Friday, I worked several hours on projects unfinished from home, but I like being busy even if the biggest appeal of the road is relaxation, carefree time away from daily cares and chores.

We got out late in the day and visited Tongue Point and the Semihamoo salmon cannery, and enjoyed a museum that was closed for the season on our last visit to Birch Bay. We returned by a circuitous route home, catching the scenery and I found a spot we hope to revisit for some pictures on another day.  We spotted a ranch that sells fresh green peas after we’d gone to our grocery for major shopping. The little beach store we stopped in on Friday had only bare necessities.  We were up late, woke late, a busy morning and I have Yoga, so, as my son Doug often says in his emails….yakatcha later.

Yesterday, it was business as usual. A number of left over from home things to take care of in the AM.  I managed to attend a yoga class in the lodge at 10:00. Different from the yoga I do at home, I enjoyed it very much.

Later, in the afternoon, we decided to head to town, do a little grocery shopping and  join the clammers at low tide. We didn’t make it out of the park. The Bronco battery showed a caution light, not charging. We returned and read for the afternoon.

The park is beautiful and I remembered that on our visit in 2011, I saw many black squirrels. We didn’t spot one. Where did they go?  I went back and looked at my previous blog. I recognized photos from a camera not nearly as good as the one I have now. That the squirrels were very interesting and I’m still fighting an injured shoulder. And, a big black crow just walked on our roof.  THE OLD BLOG:

Today is moving day. Our time at Birch Bay has been uneventful, restful and a time to catch up on small projects.  We walked the park, enjoyed the mature trees, and pure black squirrels. This is the only place I’ve seen black squirrels in the many places we’ve traveled. 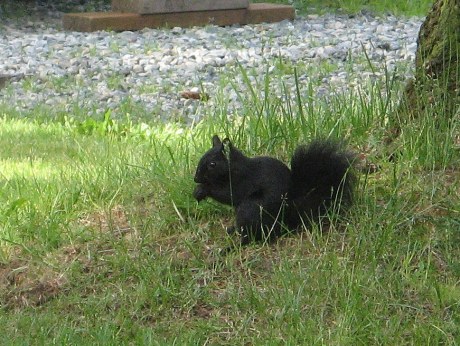 I looked them up in wikipedia and found they have an interesting background that you can read about at this link:  http://en.wikipedia.org/wiki/Black_squirrel

A woods loving plant prolific here.  I’m bothered by how few plants I can remember  names for. There was a time when I made it a point to know the names of everything that grew within my sight. I was heavily into gardening in another life.

For what reason the park managers cut this mature fir is anybody’s guess. It shows no signs of rot or damage.  Fir trees predominate and they are beautiful at this time of year with light green tips on darker old growth.

The next three days we’ll be boondocking and I’ll miss this pretty park and a friendly bird that walks on our roof every morning.
But most of all I’ll miss my daily swim. The pool is wonderful therapy for my injured shoulder.  But, the magic of RVing is looking to what’s next? What will I see?  Who will I meet?
Categories: Uncategorized | Tags: bad battery, Birch Bay Resort, black squirrels, business, home tasks | Leave a comment