A doctor’s appointment in Stockton with a cardiologist took five hours with driving time. As my leaving date gets closer, time seems to shrink. The whole week is devoted to medical necessities before I leave so my blog will be sporadic in the days ahead. The bright spot in yesterday was a birthday dinner with friends. Stuart Mast, his wife Delores Quyle, Margot Osborn and Pamela Quyle, friends I missed my last two visits home.

Margot’s birthday was January 1st. She is known through out wine country as a wine expert, mistress, extraordinaire. She has that same cache when she visits Sonoma, Napa wine country and everybody loves her.

Stuart and Delores are owners of Bryce Station Winery. They grow and bottle their own estate grapes.  Bryce Station is a young Winery. I’m not sure of the years, maybe  seven or eight, ten? Their wines are wonderful for such young grapes.  I’ve known them for a long time and didn’t think about who makes the wine?  As I was sipping and commenting on how good the wine,  Pamela said, “Of course, Stuart and Delores make their own wines. They sell out quickly.” I take them for granted. I always expect the best because this family is talented in so many ways. Delores and Pamela both paint and pot. Art is in the blood. Stuart’s, too.

On the opposite side of the table Marlene and Dick Bradford and  Heidi and Malcom. Heidi was also celebrating a January birthday. It was fun to try out the newest restaurant in town, Tortuga, billing itself as serving  Mediterranean specialties.

Marlene sculpts and pots and teaches classes at Quyle Kiln. Her work  adds a different spectrum of clay products at Quyle. She does figures and hands on sculpture that Pamela never attempts,  she readily admits. There is always something new and interesting going on at Quyle, either a wine event with food and music. Always potting and art shows. Wine and art, what a wonderful life. All they need is a bakery and cheese making to have what the poets insist is the best things in life. Well, along with love and friendship. 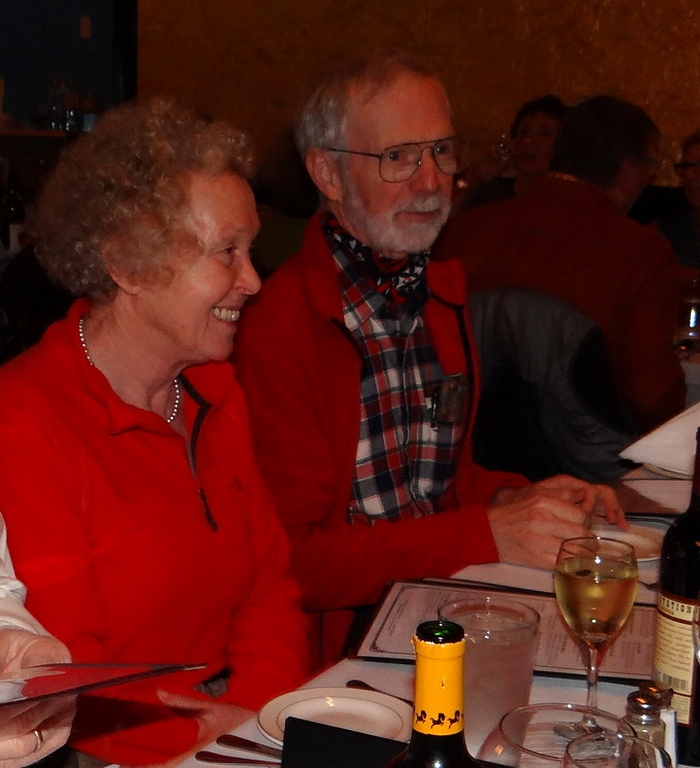 Heidi was the other January birthday. I believe I met her once before. We were both unsure. She lives part-time U.S. and part-time Germany. She is allergic to cats but inherited one from a neighbor who moved and simply abandoned the cat. She is being very thoroughly trained by this cat and isn’t quite aware of it yet as she seeks to comfort its every need. Oh, my! Such fun. The local cupcakes for desert complete with candles? Wonderful.

It was a lovely dinner with lovely people, and when you bring good wine to the table? It is a celebration.

WHY DO WE CELEBRATE AGING?

In 1982, when I first met Paul Moeller, I gave him a cat my daughter hauled home from a goat show. He didn’t want to take the cat without his wife seeing it first, but he did. Then he kept me informed and sent pictures of the cat’s antics for the rest of its life. He lost his wife two years ago, and at lunch yesterday, he told me, “I reach for Martha’s hand each morning before I’m fully awake. But our cat likes to sleep where she slept and I touch fur instead. It comforts me.”

In 1983, he talked me into joining a Public Access group. Happiness for Paul is producing video of what goes on in the community. He loves to find raw talent, put a camera in someones hands and send them out to do video with minimal instruction. Learning comes later. I reluctantly at first, and then enthusiastically helped him produce around 80 videos. Paul has done thousands, so my part was very small.

Paul has suffered a stroke, a car accident, a broken femur and he can no longer drive. He is still happiest when producing videos for the Public, so he hires a driver to take him to the shoot, and at 86 years old, he still produces video. His driver is my housemate, Karen.

I learned a great deal from this man, and I treasure him as one of my best friends. It doesn’t take much to realize that life is a journey and keeping active, no matter how hard, is what we do to make it all worthwhile.

Later in the evening, Karen and I drove to the Pizza Factory and joined my two brothers to celebrate my birthday. Theresa and Clark, me, Bill and Karen.

The same photo with Jan.  Some friends are as much a part of the family as family.  I’m fortunate to have three brothers out of five still living. So, we count our blessings and say, life is good, and then we make it so. Stay as healthy as we can, do for others, overcome adversity, smile and be happy.

Cleverly set up, this photo of Bill Foster, commanding a table with drink in hand, was so life-like I called to him from the street thinking he was set to greet his guests for his seventy-fifth birthday.  Bill is from  Angels Camp and is a medical miracle. He has spent more time in hospitals trying to kick the bucket than anyone I know. It’s no fun being a medical miracle, but what I admire about him most is his irrepressible sense of humor through it all.

He was actually greeting his guests inside the front door and I caught him with two of his grandsons.

There were a number of his good neighbors there as well, and I have no clue who was who by their names, but they and he  knew, and that is what was important. I heard some joking about his days with State Farm and more about his medical adventures.  Bill is a generous, helpful friend and neighbor and I treasure our friendship because he is intelligent, knowledgeable and mentored me many times through my insurance decisions.

This fellow told me if you take a picture, do it right. I took it twice so I hope it meets his approval.

His son Steve with Linda Strangio a close friend of Bill’s who helped bring the party together. We who were not with State Farm, were in the minority.

Another very special person in his life is “Mama Sue”, a local woman who has lived in Angels Camp for 51 years. She cooked for him, and kept his house during most of his medical problems.  He calls her his angel.

Bill’s daughter Pam avoided the camera, but I did manage to catch her before she  completely turned away. I’ve never understood why people do that, because then they guarantee that you will get a poor picture of them. She was the major mover behind this party and shed a tear as she verbally applauded her dad.

Bill’s good friends, Tom and Gail Crawford are from the Bay Area where Tom was insured by State Farm. Bill referred to Tom as a Nascar Racer. He always drove fast cars and was noted for speeding…and I guess he got a few tickets in his life. 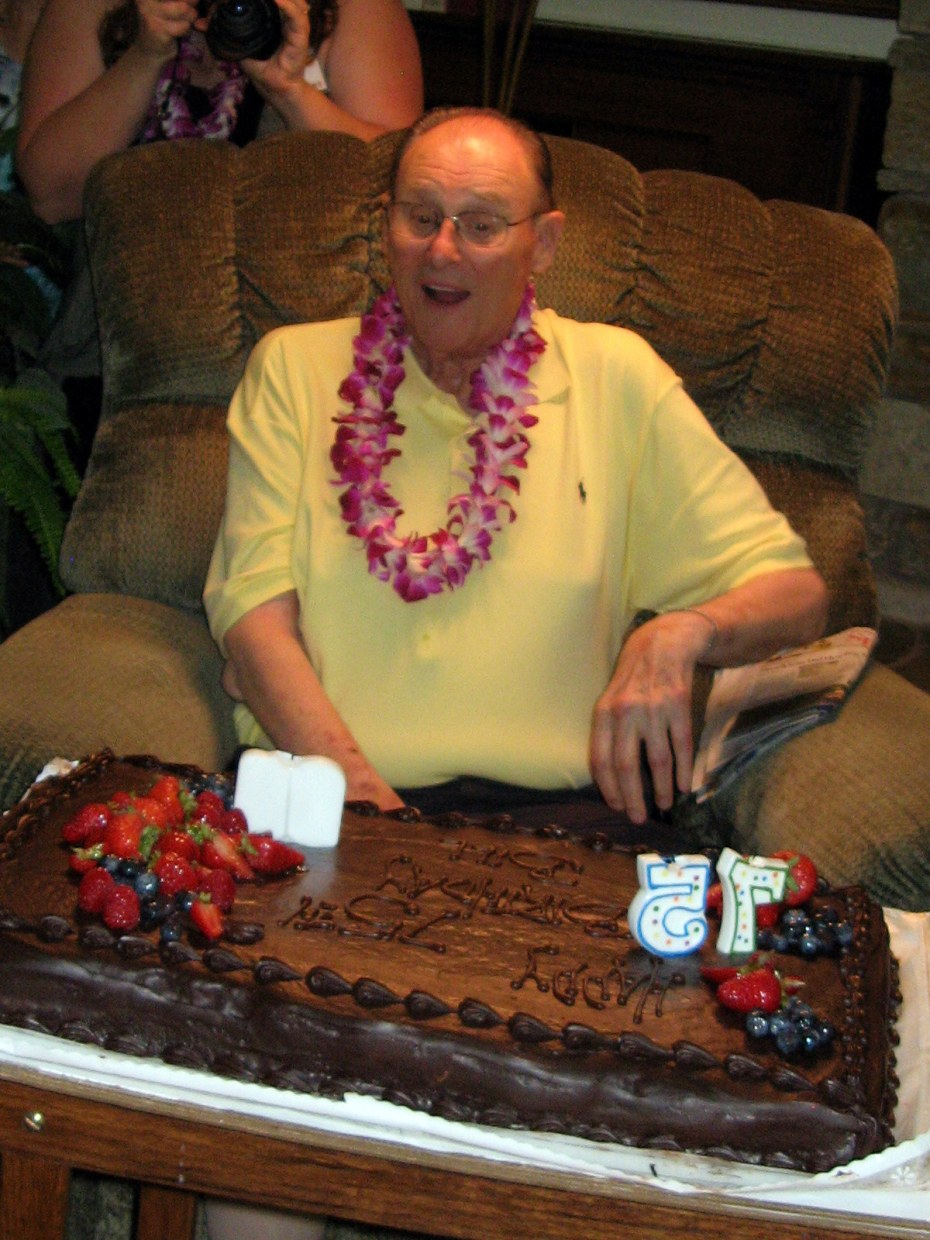 When the cake arrived, Bill gave a very short speech, thanking his approximately 70 guests for coming and told them he was glad to have finally gotten “leied.”  But the best quip came from a woman who piped up and said “I think Mae West said it best when she returned from Hawaii . ‘I’m glad to be back home where you can get laid and they don’t get it mixed up with a  bunch of flowers around your neck.’

You could not pee.

You have no enemies to meet,

Unless you stumble over your own big feet.

But sin is forgiven.

So the doctor can’t win. 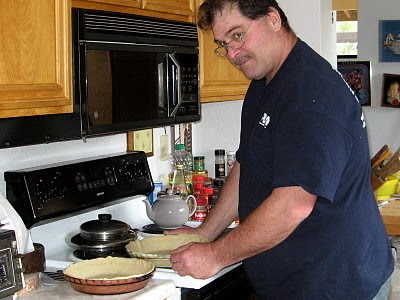 When I returned from the grocers yesterday, son Doug was cutting up my fallen tree. He cleared the driveway and piled the brush. Since I managed to celebrate Ken’s and Kristanne’s birthdays with them, his older siblings, I invited him up for his favorite dinner to celebrate his birthday.  The next thing I knew he was busy in my kitchen making blackberry apple pie. 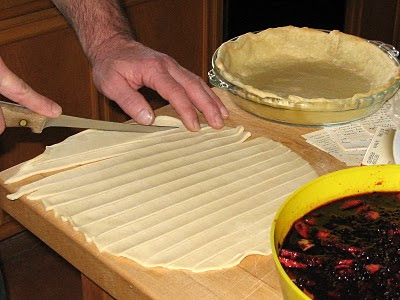 I like to cook, but baking has never been a talent to which I could lay claim. Its really kind of annoying that my son makes a better pie crust than mine. He pre-bakes the bottom crust so the filling won’t make it soggy. He picked the blackberries last September and stored them in my freezer. He likes to put on a dainty lattice top. 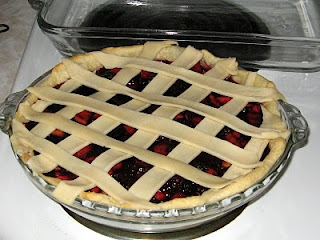 HIS pies NEVER bubble over in the oven. Cooked to perfection, beautiful,  and, he is quick  besides. He can chit chat while working and never miss a step. I mean, I CAN make a pie, but cut up a tree? No! Two of my brothers and a sister came out for the celebration. I was having so much fun, I forgot to take pictures—except for that pie. After a certain age, birthdays are kind of meaningless if inevitable, but throw in a home-made  pie and its an occasion to remember.

TIME TO MOVE ON

Last night was a multiple celebration of sorts. For Jim and I, our last get-together with family before hitting the road. Son, Ken made his favorite brew, an imitation of Mirrorpond, one of his favorite commercial beers; good company while manning the Sunday barbequed chicken. It was a good copy, but for me, his pumpkin beer will always be the best.

Also, on this occasion, a family temporarily united. Kristanne’s husband, Richard came with the help of his friend, Mike, and brought their household goods to the new place in Las Vegas, two loads over the mountains in the snow. The economy has leveled their former life in the same community. Now, Richard works in Irvine and Kristanne works in Las Vegas. Austin was excited to see his dad.

And Alec, giving his best vampire imitation, was happy to see his little brother and Kristanne.

It also happened to be Kristanne’s birthday, so Laurie made a cake for the occasion.

We helped Kristanne celebrate her turn to be 49 for a year. 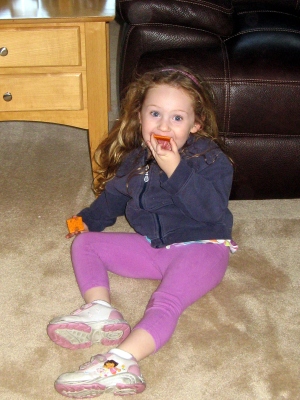 The kids played. (Their parents are friends of Ken and Laurie’s) 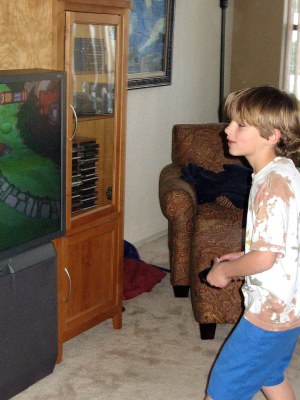 We enjoyed good food and conversation with Kelly and Jeff, the parents, and,Mike.  Everybody had a good time with good eats.

And, we said our goodbyes.  Jeff, wrote and played a song about Walmart, and their 39 hour work week so they don’t have to pay any benefits to their employees while buying all their shoddy goods from China,  including produce, in some cases.

Unfortunately, my battery went out before the video was complete, so this is but a short sample.
It was a great to be able to spend several weeks in Las Vegas, spend time with family, and get my new computer off the ground. Today, we are headed for Palm Springs.