We left the Leavenworth area Thousand Trails headed for Stevens Pass. We got our first glimpse of a snow-covered peak.

A second, sharper peak hove into view. But, a pass, is a pass. We will avoid those lofty, snow-covered heights. 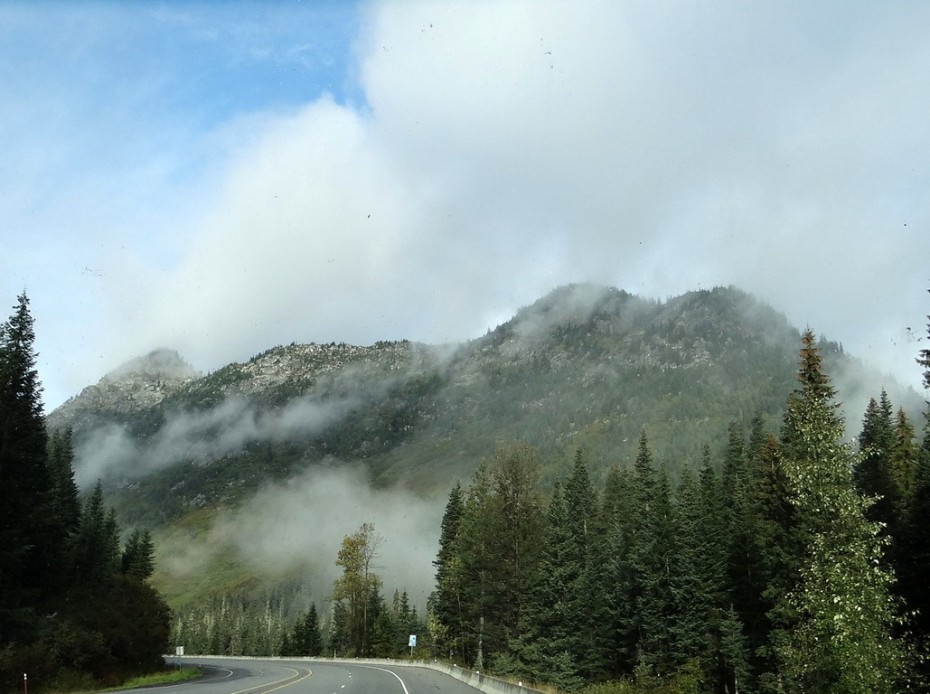 As we climbed fog rolled around the hill sides.

Moving wisps and billows made everything beautiful.

It teased and played with us and seemed to drop lower. In fact, it was we who were getting higher into the fog belt.

We crossed the summit at 4,111 feet and descended into a solid bank of fog. 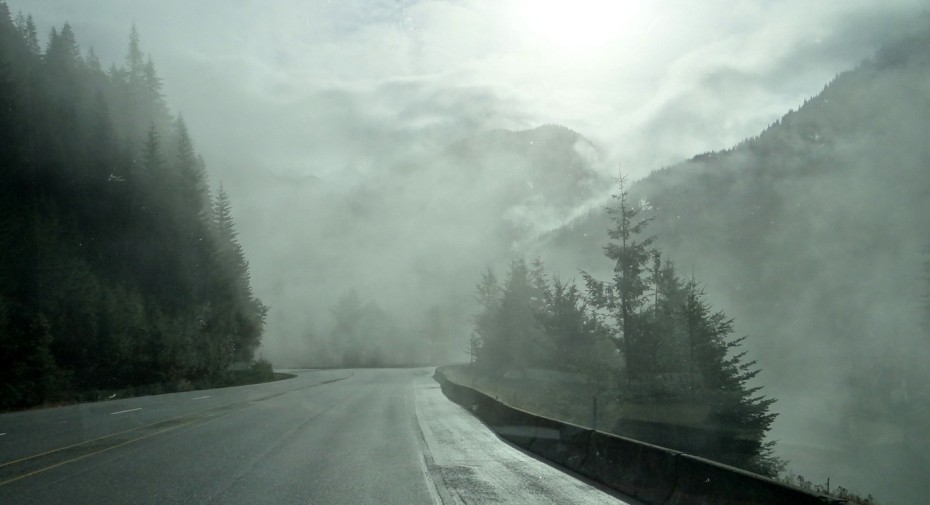 Luckily, not as dense as it appeared. We drove out of it in minutes and arrived safely and happily in Western Washington.

We are camped at Thunderbird Thousand Trails near Monroe Washington, which sits on the Snohomish River. We walked down to the river and watched the salmon spawn and jump. 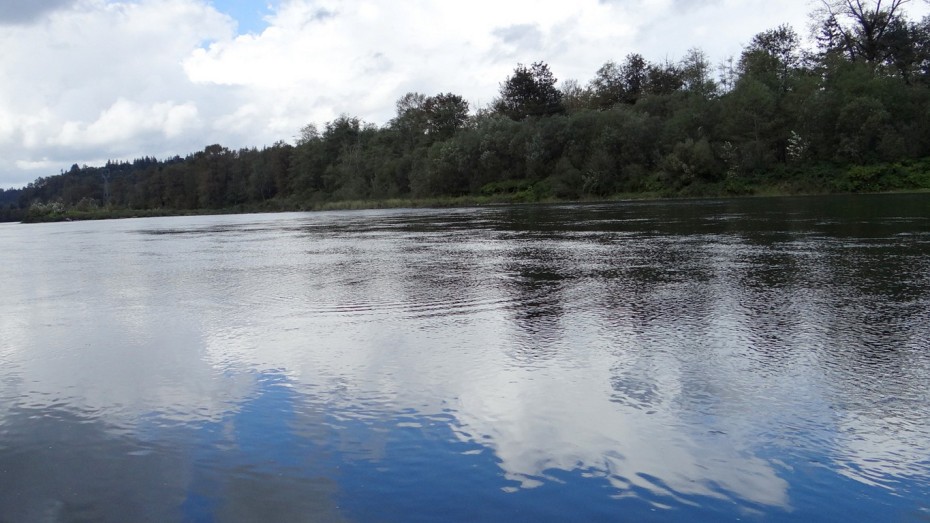 As hard as we tried we never could get a picture of one breaking the water in one of those beautiful, twisting jumps.

About 3:00 p.m. Jim’s good friend Al Penta stopped by. An avid bicker, since we last saw him, he’s ridden bike events in Vermont, Quebec, Florida and many closer to home. His bike is his main means of transportation. His next trip will be to Cuba, by way of Cancun with a U.S. group of vets.  It was raining lightly, but avid bikers are undaunted by a bit of rain.

Al’s girlfriend, Kim, works weekdays and lives in Seattle, so I will miss her this trip. I fly back to Murphys tomorrow.  Jim has known Al for 62 years and he told me Al knows the words to all the songs we grew up with. He got him to sing for me. Thanks Al, I never understood half the words Fats Domino said in that song Saturday Morning, until you sang it for me.

Since I refuse to shop at Wal-Mart, Jim went to pick up some items he wanted while I stayed in the Motor Home. He was wearing shorts and a T-shirt, the sun was shining , and then…it started to pour. He raced through the parking lot to the Bronco with water swirling around him. He inadvertently left his  fanny pack unzipped, and when he got back to the Bronco, his money was gone. He retraced his steps and found it floating in a puddle.

I never thought I’d see the day he would launder money, but here is the proof!  Drenched to the skin, it took  24 hours  to dry his shoes. 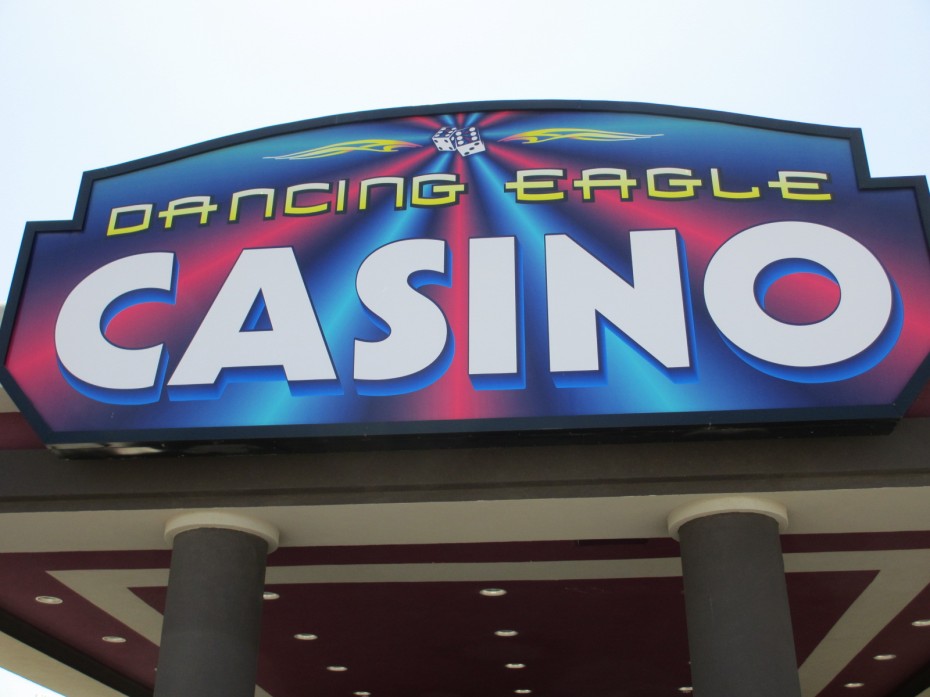 We drove to Casa Blanca, where we will visit a pueblo on top of a plateau today, Mother’s Day. Settled into the Dancing Eagle Casino, owned by the Laguna Indians,  is a comfortable place to stay.

Their food is very fresh and delicious. A vast menu, reasonable prices. Nice. 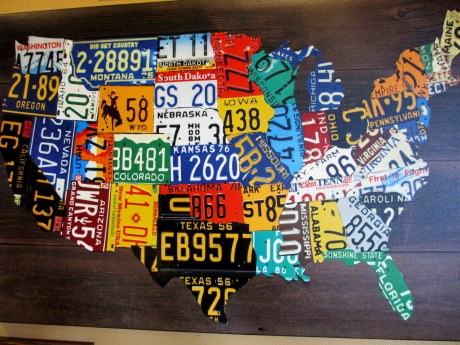 I admired this clever map of the United States done in license plate pieces. It seemed impossible to me, but the artist managed to  get tiny  Delaware and Rhode Island pieces on this map. If you enlarge it, you can see the full name of almost every state.

We  meet a lot of full-time RVers on the road, but not many that live on their bicycles. This guy was doing the best he could in a bad economy.  Well rigged out; he had a sign, a money box for donations, a flag, a tent, blankets, a neon vest so he can be easily seen,  and a duct taped sign. Hey, you gotta do whatcha gotta do.

To all the mother’s in my life, and those I don’t know, may you have a Happy Mother’s Day!  Remember, The hand that rocks the cradle is the hand that rules the world.  Well, William Ross Wallace  could be wrong about that,  hmmm!

My dog sleeps about 20 hours a day.
He has his food prepared for him. He can eat whenever he wants.
His meals are provided at no cost to him.
He visits the Dr. once a year for his checkup, and again during the year if any medical needs arise.
For this he pays nothing, and nothing is required of him.
He lives in a nice neighborhood in a house that is much larger than he needs, but he is not required to do any upkeep.
If he makes a mess, someone else cleans it up.
He has his choice of luxurious places to sleep.
He receives these accommodations absolutely free.
He is living like a King, and has absolutely no expenses whatsoever.
All of his costs are picked up by others who go out and earn a living every day.
I was just thinking about all this, and suddenly it hit me like a brick in the head…….   My dog is a member of Congress!
(Don’t know who wrote this. It came in my email.)
Ciao