We’re still at the Golden Sun RV Resort in Apache Junction, Arizona where we will remain hanging out and visiting with friends. See my Blog entry for more information about this place… http://wp.me/pDCku-3wM

The day before yesterday Mary and I went to this museum for an enjoyable two-hour visit.. The Superstition Mountains lie east of our current location in Apache Junction, Arizona. This is what they look like… 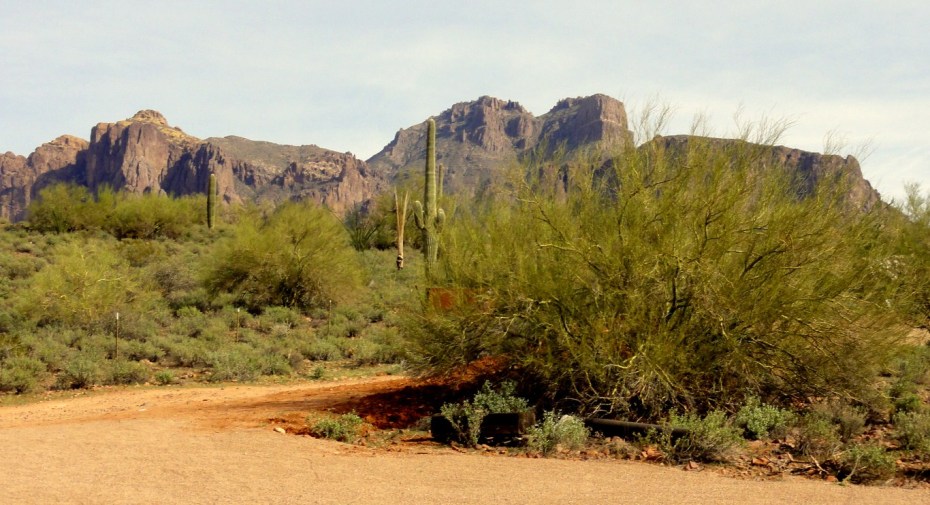 The legend of the Lost Dutchman’s Gold Mine centers around the Superstition Mountains. Click the link to read about the legend.

The museum presents historical details about the Superstition Mountains. Here are some photos I took while there… 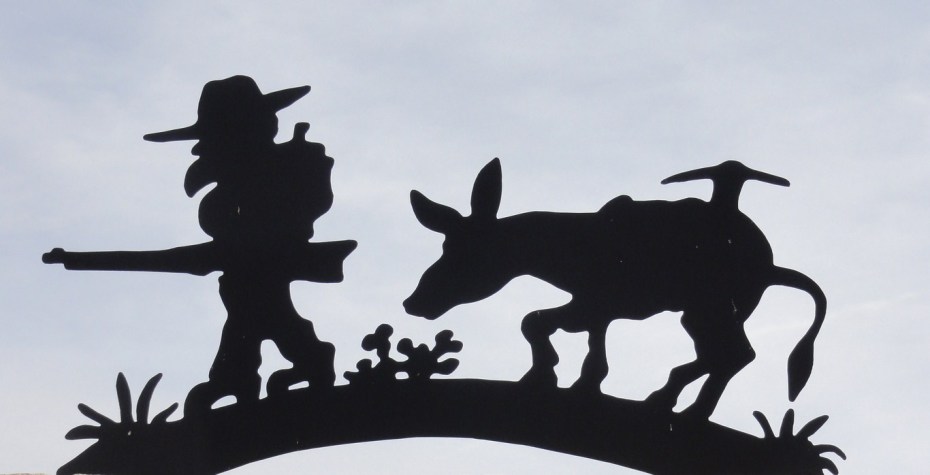 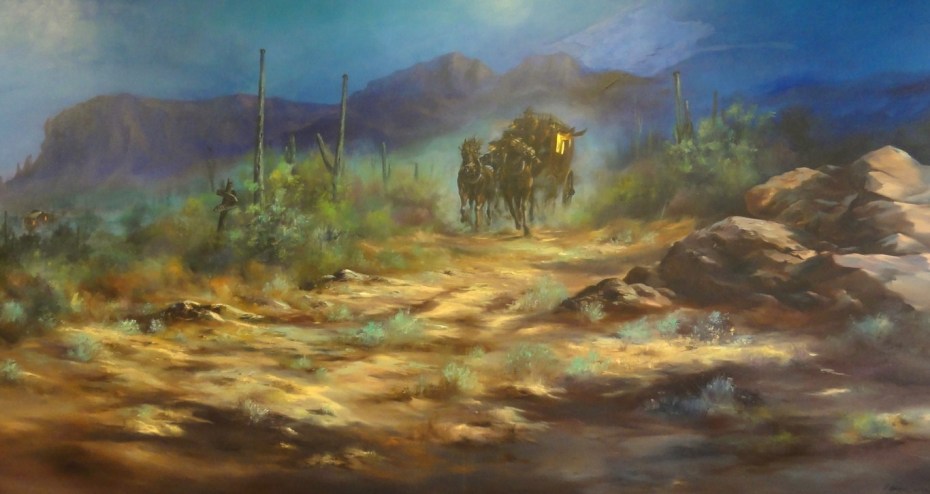 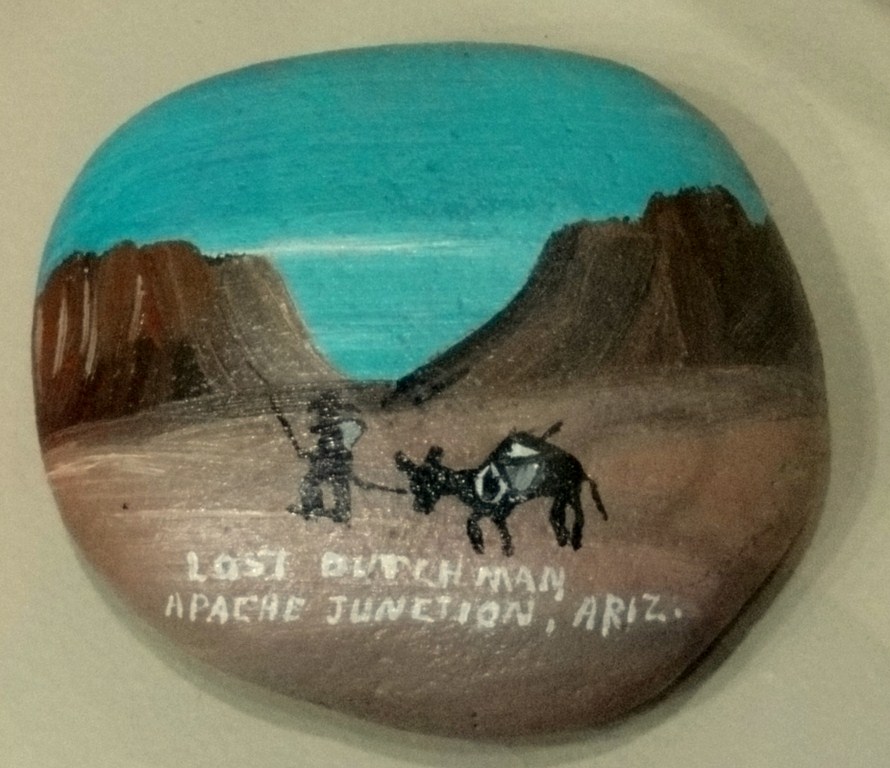 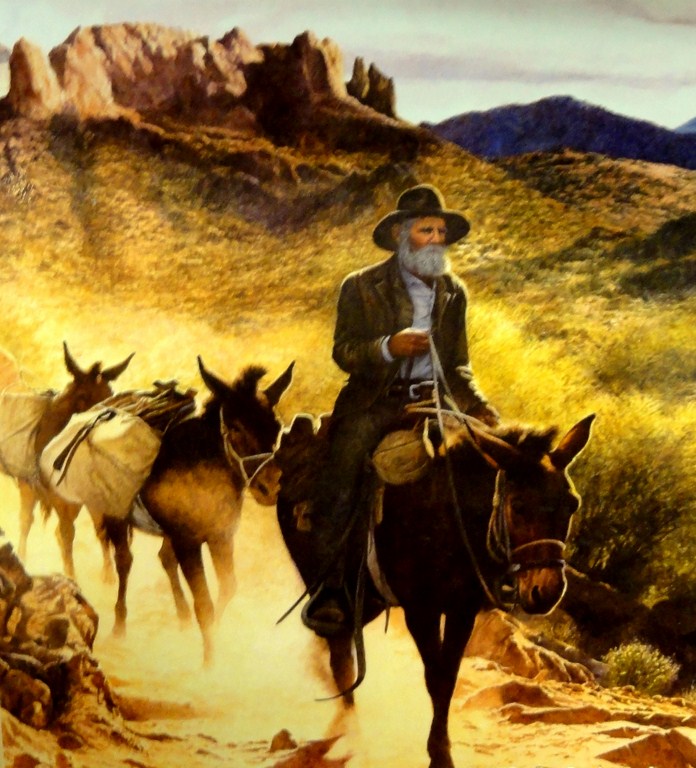 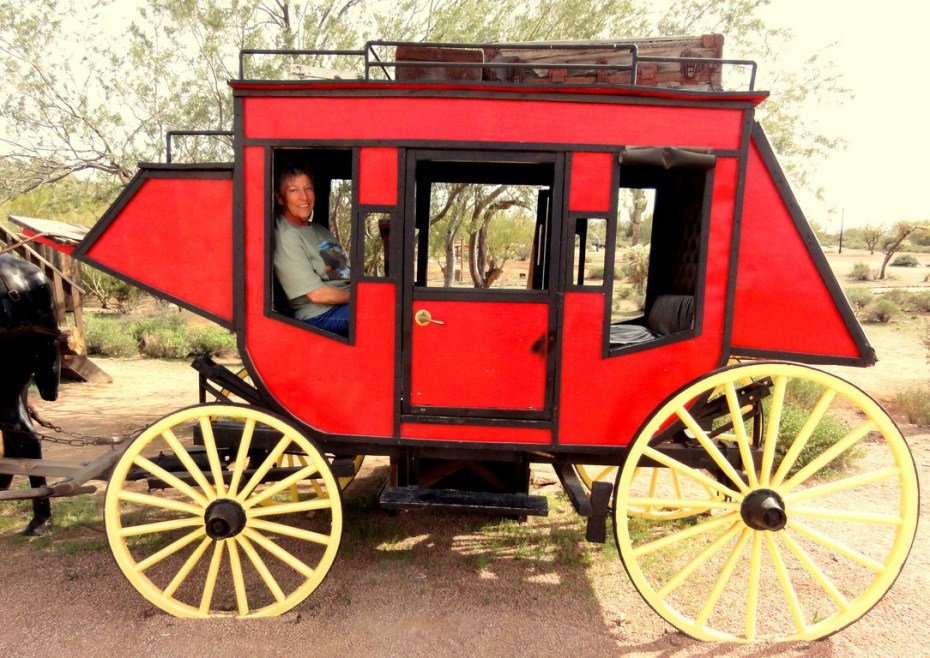 Going to museums and understanding the history of the areas we visit is one of our very favorite things to do in our RVing lifestyle.

Yesterday Mary visited a friend from the area. I spent two hours on the cellphone with Verizon troubleshooting our intermittent Internet signal, got the Bronco washed and spent a good part of the day reading.

We’re still at the Golden Sun RV Resort in Apache Junction, Arizona where we will remain hanging out and visiting with friends. See my Blog entry for more information about this place…
http://wp.me/pDCku-3wM

Yesterday my good friends Aaron and Cheryl came to visit us. We had an enjoyable three-hour visit during which time we shared a nice breakfast at a local restaurant. They are avid dancers and come to Mesa, Arizona because there’s lot’s of dancing here during the Winter season. They qualify as my “most unusual” friends which means an abundance of laughter. 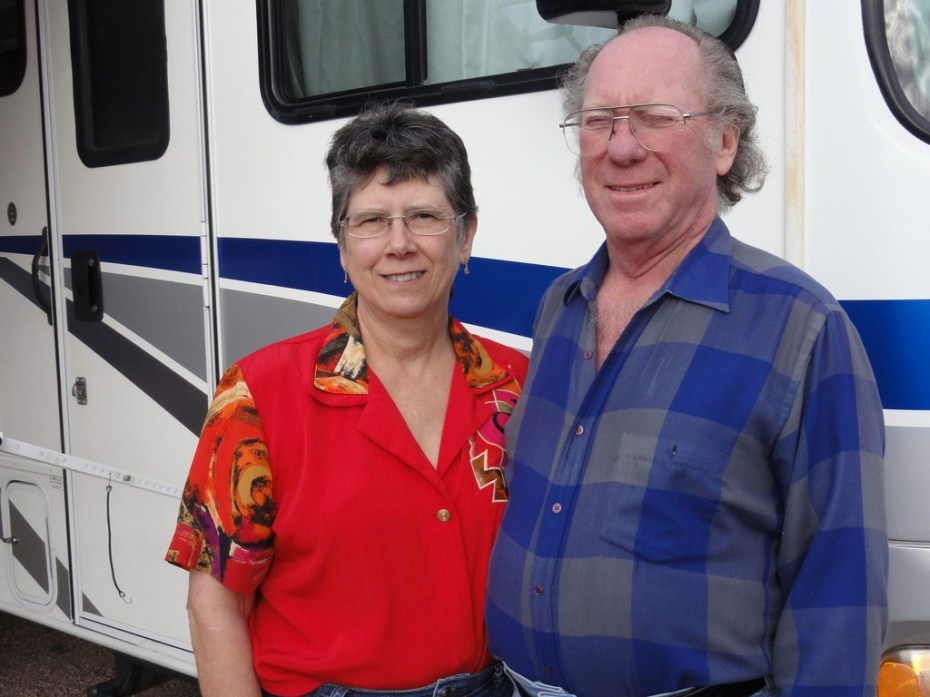 We last saw them at their home in Oregon last October. Because the RVing lifestyle is a mobile society, based on our current plans, we will not cross paths with them again until 2014. RVers never say “Good-Bye”, instead when we part company we say “See you down the road!”

If you are not familiar with our current travel plans for 2012-2013…you can click this link to find out…
http://wp.me/pDCku-3pp

A Small Modulator Valve Was The Problem…

We’re still at the Golden Sun RV Resort in Apache Junction, Arizona where we will remain hanging out and visiting with friends. See my Blog entry for more information about this place…
http://wp.me/pDCku-3wM

A couple of days ago our towed Ford Bronco II started having transmission shifting problems. I called my friend and Cracker-Jack mechanic Mike in Washington and he diagnosed it as a bad modulator valve. This small valve fits into the side of the transmission and regulates the shifting process.

It was quite a tricky job getting the faulty valve out and the new one in place. A couple of hours and a little over $100 and all was well once again.

Soon we will be heading out into the toolies for about one month and I needed and wanted this problem resolved before that time. We just do not need to unnecessarily  break down in the middle of nowhere.

We’re still at the Golden Sun RV Resort in Apache Junction, Arizona where we will remain hanging out and visiting with friends.. See my Blog entry for more information about this place…
http://wp.me/pDCku-3wM

In the meantime…here’s an interesting story.

As a person who travels extensively with a debit card…I found this article most interesting. Perhaps you will also.

You’ve probably heard that saying before. Well it also applies the life of one who writes a daily Blog. Most of the time we’re going and doing lots of places and things…so writing a daily Blog entry is a fairly simple task. But yesterday wasn’t that kind of a day. So, here’s an example of a Dust Blog day!

Yesterday was our second day at the Golden Sun RV Resort in Apache Junction, Arizona. See yesterday’s Blog entry for more information about this place…
http://wp.me/pDCku-3wM

I spent the morning doing odds and ends things, like cleaning up computer files, replacing a contaminated water hose, emptying our waste tanks, cleaning our solar panels, troubleshooting our tv antenna system, contacting friends to set up visiting times…those sorts of things. So what to write about today?

When I got up this morning it stuck me! In numerous previous Blogs I’ve mentioned how much Mary makes me laugh…so I thought I’d give you a couple of examples. A few days back in one of Mary’s Blog entries she wrote about a pack rat midden,

Here’s the link where Mary wrote about the pack rat midden… http://wp.me/pDCku-3w5

Being an ex-military guy and ex-engineer…I tend to be somewhat neat and organized. Mary…on the other hand…hmmm. Let’s just say she’s a “collector”. At her home in California she has lots of “stuff”. I’ve told her many times all she needs to do is put up a sign and she could open her own museum. She’s trying hard to break this habit…but she’s not there yet!

Here’s a photo of what our table looked like first thing this morning. Can you guess which side of the table is hers?  🙂 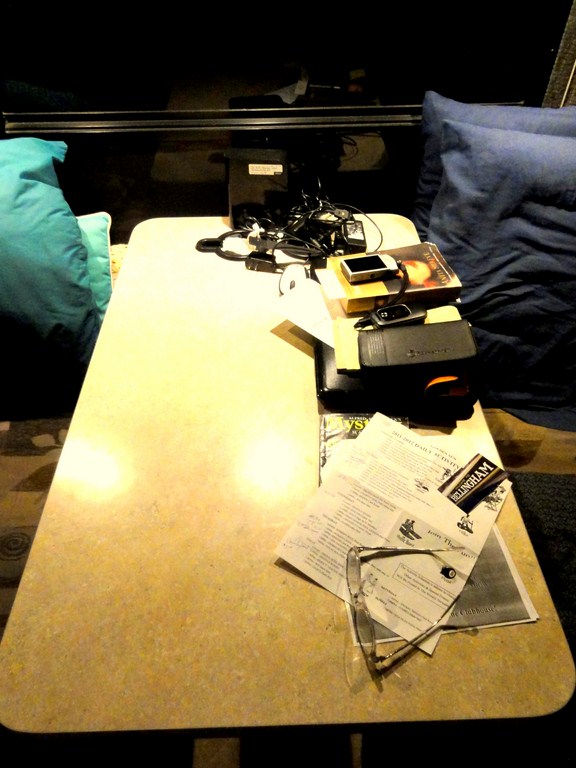 Today it wasn’t too bad…it’s been worse! For whatever reason it reminded me of a pack rat’s midden. She also has several other “stashes” in our motorhome that I haven’t shown you. She’s really trying to get better. In the past she’s had my side of the table covered with her stuff. Since I’ve threatened to draw a line down the middle of the table…she’s gotten somewhat better.

Mary’s slogan is…”Bite off more than you can chew and chew it!” That can also be translated into…”Put ten pounds of stuff into a five-pound sack”. She just has a tendency to load things to their capacity and more. Here’s an example…

A photo of our refrigerator the day before she rejoined me about 2,5 weeks ago… 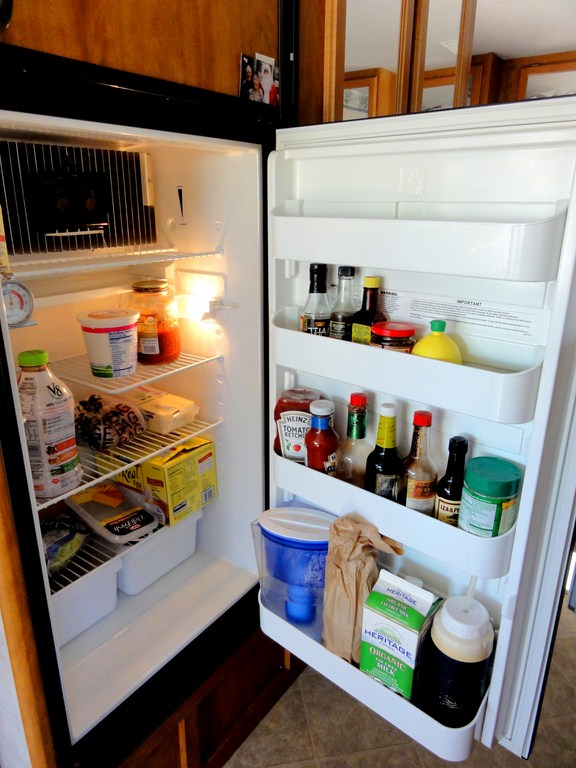 Here’s what it looked like a few days later… 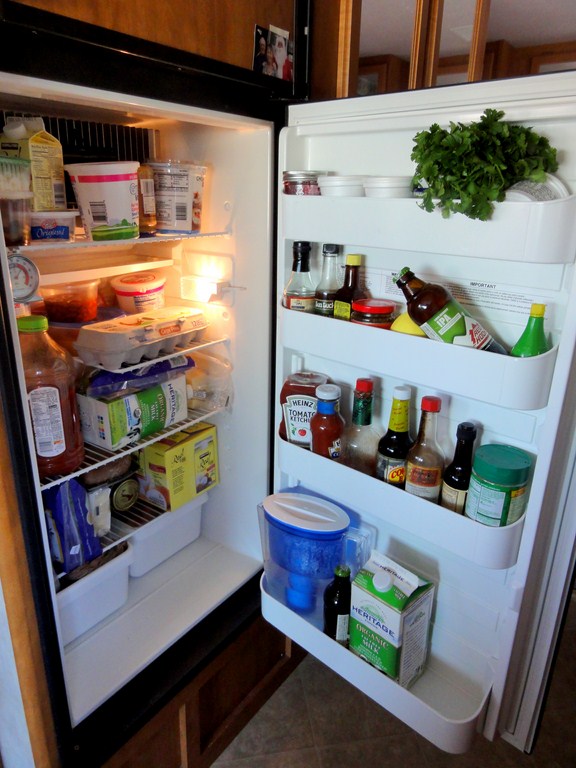 She’s really trying to curb her stuffing tendencies…it’s been crammed tighter than this in the past.

Like I said earlier…she brings lots of laughter into my life. I wouldn’t trade her for the world!  🙂

We arrived here yesterday for a ten-day stay, during which time we’ll visit friends in the area.

Here’s a Google Earth image of the resort…

This is not a real-time image. If you look closely on the lower left you can see the image was made June 24, 1992, The units on the left and center are permanent mobile homes. Streets H, I and J are vacant because it’s June. Right now they are mostly full of RV’s like ours. We’re in site I-23 as indicated by the red “X”.

Here’s a photo of our site… 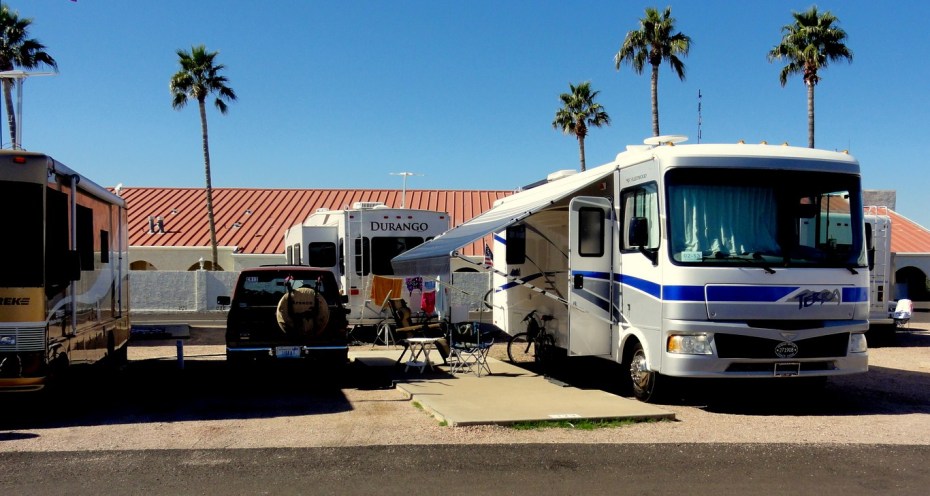 After we got settled in, we took a walk around the park to acquaint ourselves with the place. They have a nice book-exchange library so we spent some time finding new books to read. Which then led us to inventorying our current book stash. Mary and I are both avid readers so we have a lot of books ready for exchanging as well as waiting to be read. Mary out-stashes me by a factor of 2 to 1.

Later in the afternoon we went to the post office to pick up the tabs for the motorhome which had been forwarded to us. Then a visit to my home VFW Post #7968 for a cool beer. In the evening we went to my home Moose Lodge #2039 for a meal.

The park is nice and clean with lots of amenities and activities. It’s also very conveniently located only about one mile from downtown Apache Junction. There are many parks like this one in the Apache Junction area. Many folks spend their entire winter in one warm and sunny location.

To read all about this resort, you can click this link…
https://www.thousandtrails.com/getaways/arizona/goldensun.asp

The normal daily rate here is $34 a day. Because it is owned by Encore which also owns Thousand Trails RV Resorts of which we are members…we get to stay here for only $3.00 a day. Such a deal!