Jim says: As you might imagine, Pensacola, Florida being a major seaport on the Gulf of Mexico has an interesting and colorful history. It’s known as the City of Five Flags. Since its founding in 1523, the flags of Spain, France, Great Britain, The Confederacy and The United States have flown over it. Old Hickory” Andrew Jackson accepted Pensacola from Spain on February 22, 1820.

Yesterday I spent an enjoyable hour in this smaller, but very well done museum.

Like most seapots, Pensacola had a Red Light District.

To see the other 22 photos I took, click this link…
http://picasaweb.google.com/jimjrver/PensacolaHistoricalMuseumFL041410#

The Battle of New Orleans led by Maj. General Andrew Jackson against the British Maj. General Sir Edward Pakenham took place on  the Chalmette Plantation just 6 miles south of New Orleans. The “real” war was far removed from New Orleans and was instigated by impressment of sailors,  the British fomenting the Indians,  and the desire for some Americans to annex parts of British held Canada. The war was moving half-heartedly because Britain was also fighting Napoleon. Once they defeated Napoleon,  the British moved battle hardened troops to finish the job and wipe up the Americans. One aim was to take the Port of New Orleans and control access to the interior.   In fact a treaty was signed before the battle of New Orleans took place but Pakenham was ordered to keep on fighting until the Treaty was ratified.

Pakenham had encountered and won several skirmishes leading up to Chalmette, his troops were tired and he proposed to rest. When Jackson found his troops were nearby, they decided to engage them immediately, as night was falling. They stationed themselves behind this small levee formed the Rodriquez Canal from which the plantation watered their crops.  Every manuever Pakenham tried was met with heavy fire from American embattlements and in the morning, the American troops were aghast at a sea of red bodies on the opposite side of the canal. 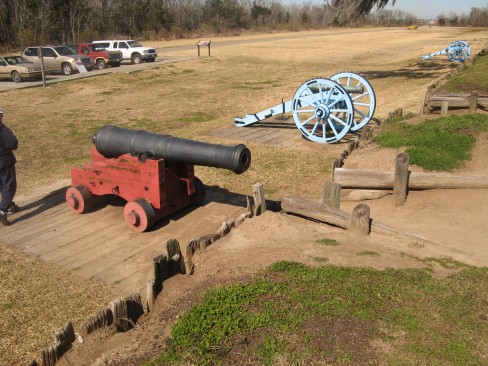 The British dead exceeded 2000, the Americans 18. The battle was a turning point in the war. Britain finally recognized that Americans were a serious challenge and couldn’t be fought so far from home.

A National Cemetery was dedicated on this battlefield in 1864 for the reinterment of Union Soldiers who died in Civil War Hospitals and were buried in nearby locations. Ultimately, 15,000 veterans and some dependents of wars on American soil were placed here, over 6,000 of them unknown.

The gravestones reflect the company, infantry, cavalry or other designations of rank and place as in the stone above, hospital steward and below, volunteer infantry from the Spanish American war.

The battlefield was flooded during Katrina and the visitor center destroyed. It is just now being rebuilt as so many places in Louisiana still wait even after five years.