MARIGNY AND THE FRENCH MARKET

My partner Jim wanted to visit the French Market.  We walked through the old area of Marigny and found everything French, signs, a Frenchmen Hotel, a Paris fountain, a statue of Joan Of Arc, and Frenchmen Street,  which made Jim very happy. 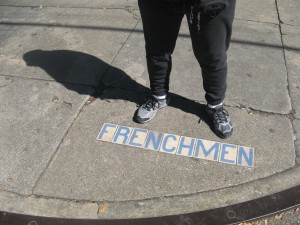 The street scenes here are San Francisco,  Haight-Ashbury,  University Ave.,  Berkeley, 1960’s.  Street musicians, laid back, friendly people, artists, dogs to pet.  Shops with opium pipes and cigarette rollers;  a strong gay and lesbian population. Homey, ragtag eating places, tacos on the street, everybody has to make a living, man!  (I found a  another endangered species- a working telephone booth.) 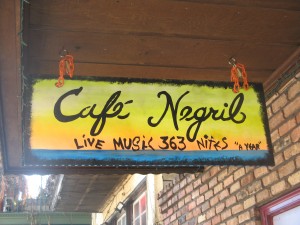 The music never stops. Everywhere, people are having a good time. Everyone knows everyone’s business and they like it that way. One shop keeper told us that Marigny was just chosen the best neighborhood in the United States. He didn’t have much in the way of detail, who judged it, or what criterion. 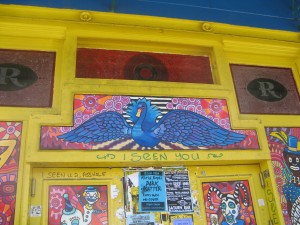 This  graffitied building even had its windows painted over, but it was open for some kind of business. I opened the door and peeked and got a glimpse of a billiard table. 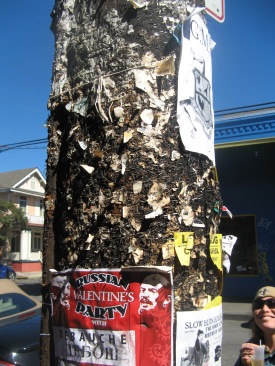 This clinched the Haight with this well used telephone pole.

The Spotted Cat piano player was hammering out tunes. The joint was small and cozy. At night, I’m guessing it is a very friendly place. I want to come back here. 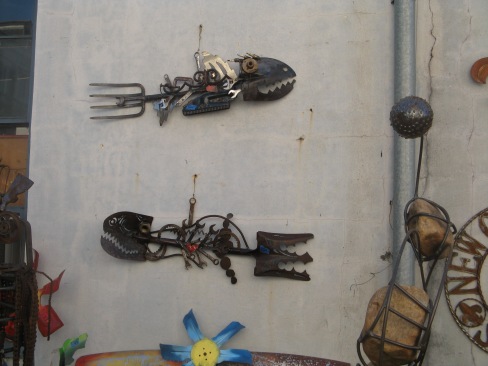 A woman told me she lives next door to this “found junk” artist. Her comment, “You should see his yard!” I laughed because I would have loved to see his yard.

When we reached the French Market, music was in full swing. This costumed fellow jumped off the stage and played with the crowd. Oh, the costume, to die for. 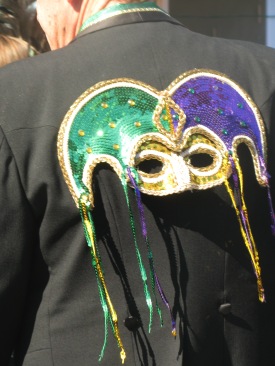 As you might guess, characters abound here. And this gent decided you don’t have to wear your mask on your face.

Boiled peanuts were a new food to me. Though salty, they were quite good. We enjoyed Creole chicken with dirty rice and peas; and alligator sausage stew from a market booth.  Both choices were delicious, plentiful and cheap. We saw people waiting in line 20 deep to get into buy a muffaletto sandwich. 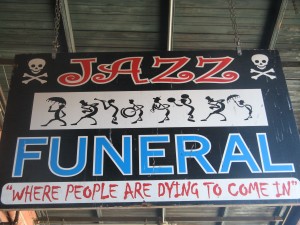 If you don’t have jazz musician friends, you can still have a jazz funeral.  A mime told me and I quote: “You only have to do three things. Die. In order to die you have to live. In order to live you have to take a good shit once in awhile.”   Street wisdom!

We wondered back to “The Quarter” , stopped for real brews at Crescent City Brewhouse and watched the kid shuck oysters. He told us he sometimes does this for 13 hours straight. He makes it look pretty easy, but you have to have the right tools because it isn’t easy. 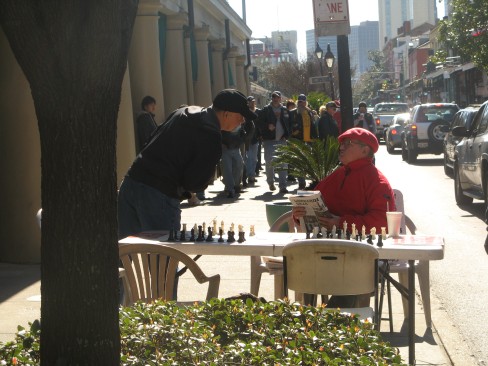 Around Jackson square the proselytizers were in full sway. The gentleman above challenged passersby to a chess match for $5 a game. Fortune tellers, tarot dealers, face painters, portrait painters, street musicians, artists and tourists crowded the square.

We visited a jillion souvenir shops trying to find a frog hat for Jim. Alligators? Plenty.  But no frogs.

I took a lot of pictures. You can check them out with this link.