From Khajuraho, we took a 40 minute plane ride to Varanasi and checked into our hotel. Because we leave before dawn to see the religious festival that attracts thousands of pilgrims to the sacred River Ganges, Ranvir asked to host our farewell dinner a night early. First a concert by two excellent musicians. The drum sounds like a deep throated bull frog between taps with hands and sticks.The stringed instrument emits high pitched notes our ear is not used too. Not easy to play, both men worked up a sweat while playing. 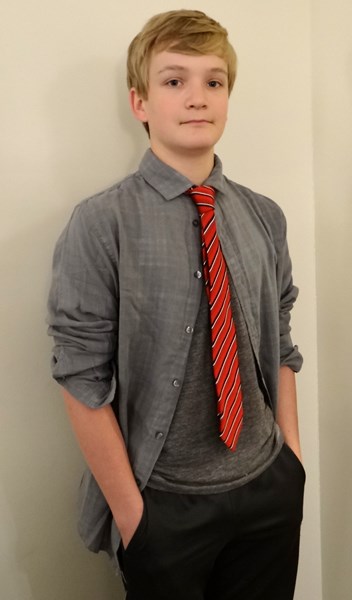 We dress up for dinner. Theo has a nice tie and a shirt with a collar. 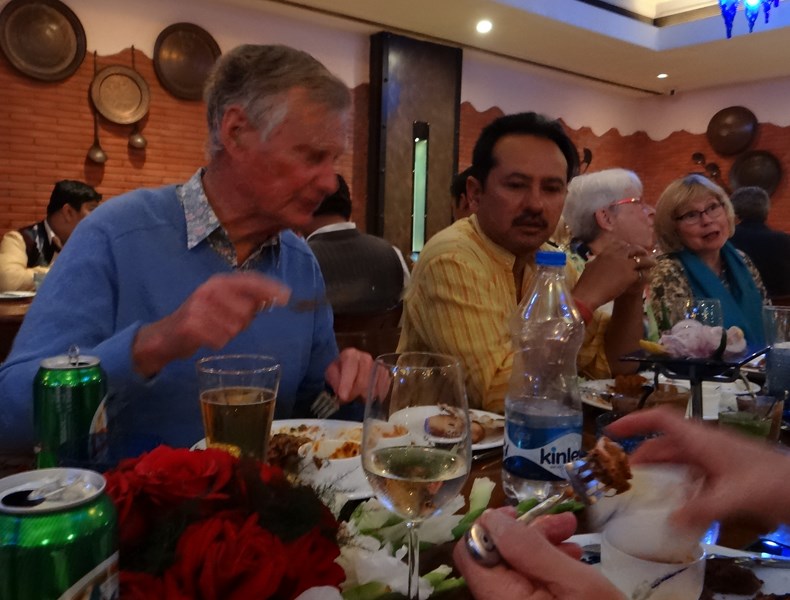 Dinner is fast paced with food coming at you in waves of various smoked meats and vegetable dishes, sauces and exotic combinations.  Adam told this great story of his college days at Cambridge. He would enter a pub and have a drink, then challenge anyone to eat three boiled eggs, without liquid to wash them down, faster than he could drink a flagon of beer. The loser paid for his  beer for the evening. He always won. My son Doug would pull a similar trick. As a carpenter, his challenge was that he could pound 10 3-penny nails into the end of a piece of 2 x 4 in ten seconds. He always drank free. 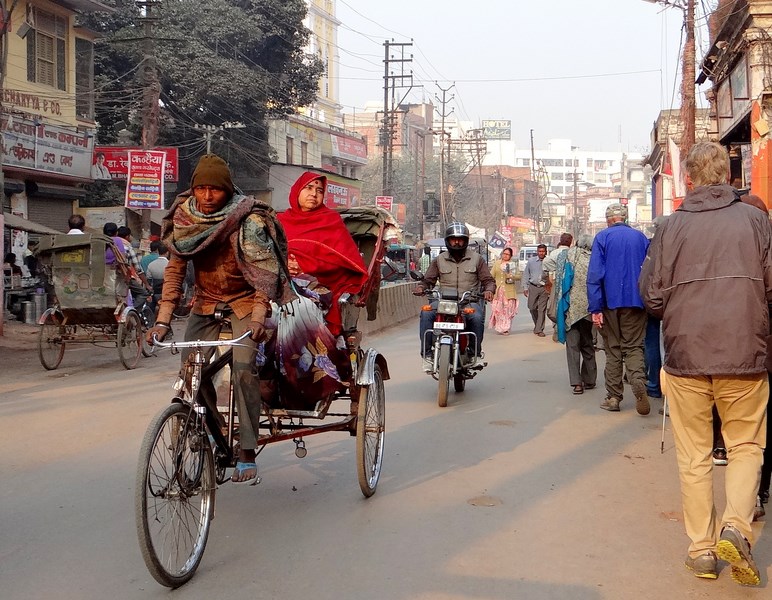 Before dawn, the bus takes us where permitted and then we walk to the river. Everyone is bundled up and we take in the ever changing panoply of street people.

Beggars hoping for a handout. 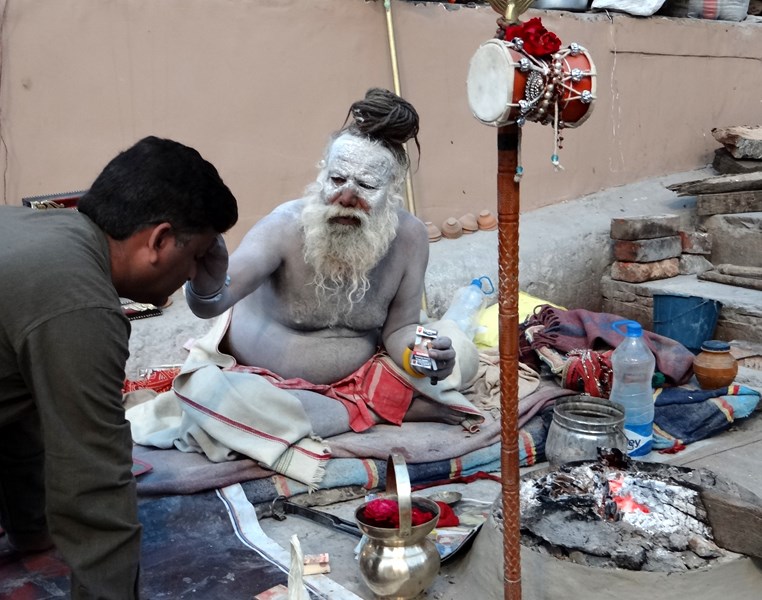 This is our guide hailed by a holy man with white paint who anoints him with a red dot on his forehead. Our guide took us through a narrow alleyway shortcut.  Motors and walkers in tight quarters squeeze  past each other. He warned, stick together like glue. Theo wasn’t feeling well and stayed in.

We load into boats and view everything from the river. They cremate 150 to 200 bodies a day on the Ganges River.

We watch the sun come up and view the bank where the cremations take place, from the boat.

It takes 200 to 300  kilograms of wood for one traditional cremation. The body is placed in the middle,  covered in branches of sweet smelling herbs, then covered the rest of the way. It costs the equivalent of $6000 American for a traditional burial. Most people must use the electric, or in some communities, gas crematoriums, which are cheap.

In this picture, the man in white with a shaved head is the one who lights the fire for his father. (Or, brother, or wife, or son.) He walks around the funeral pyre three times clockwise, and three times counter clockwise before he torches. Notice the man, lower right corner, carrying a huge pan full of ashes on his head. The untouchables will go through the ashes and collect anything of value like gold fillings, or gold fibers before delivering the ashes to the river.

Here you see the body coming in under the red plastic. Under that is the body covered in a saffron robe with gold fibers. It is removed and along with the pallet thrown into a separate fire. Taking pictures of a cremation is forbidden, our guides tells us.

This body is getting a dip in the Sacred River before cremation. Pregnant women, infants, people who died of snake bite, people who have leprosy or anyone who renounces faith will not be cremated. Women are no longer allowed to attend cremations because they would often throw themselves into the fire to go to a better place with a loved one. The government forbids that now. 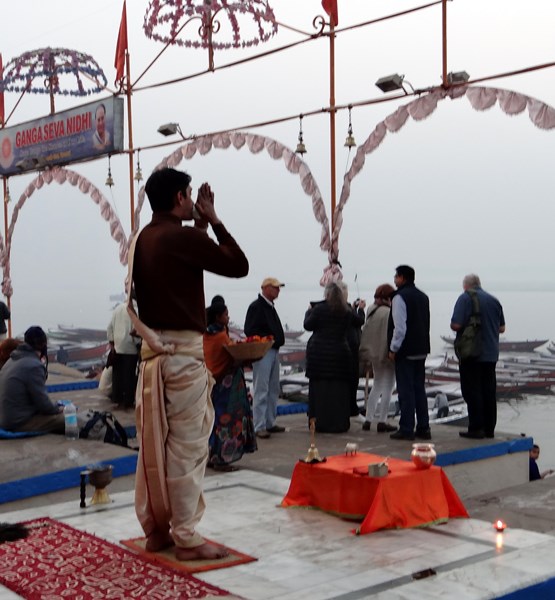 The festival is very spiritual. It isn’t only about cremation. On the riverside are ghats where people register their dead, and arrange for prayers and a proper entrance into the hereafter.

This man is performing his own ritual with the candles, flowers, fire and bells.

The participants sometimes get into a state of ecstasy or trance.

Each ghat has a priest who records the death for the government and performs the ritual for his customer. The government records births and deaths now. Ranvir tells us that at one time, a person could go to his village priest and he would have the records of your father, your grandfather and whoever died before them, handed down from a former priest. This city is 4,000 years old and death is a cause for celebration.

The Ganges is a mecca for pilgrims to come and take a ritual dip and cleansing in the sacred waters.

Some may travel across the country and make it once in a lifetime to the Ganges. Others come every year.

Bathers are everywhere. Some bring vessels to take the precious water home with them. 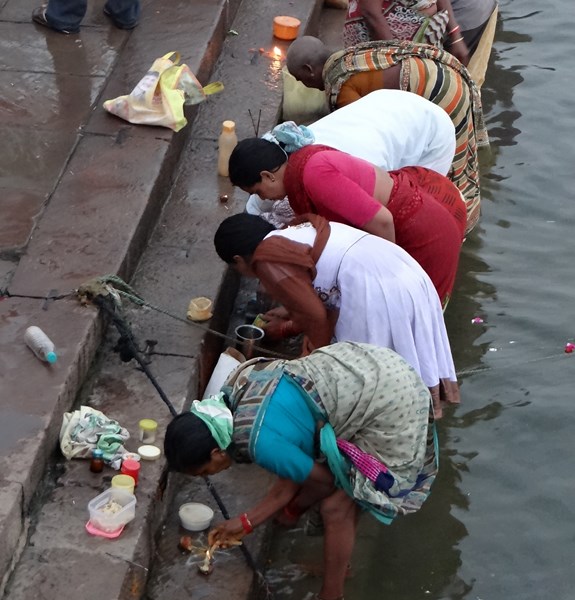 Bathing and lighting a ceremonial fire for a loved one departed.

The process is fascinating. 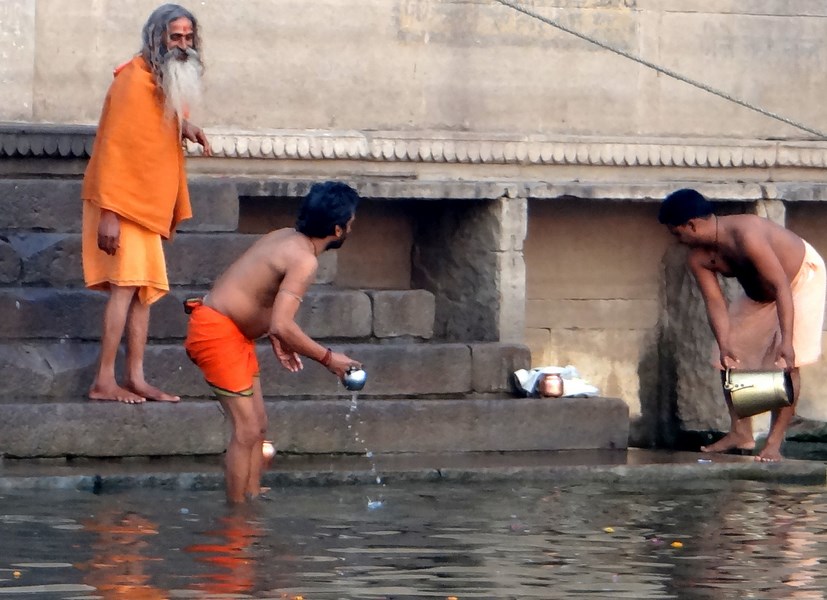 Men and women bath together. 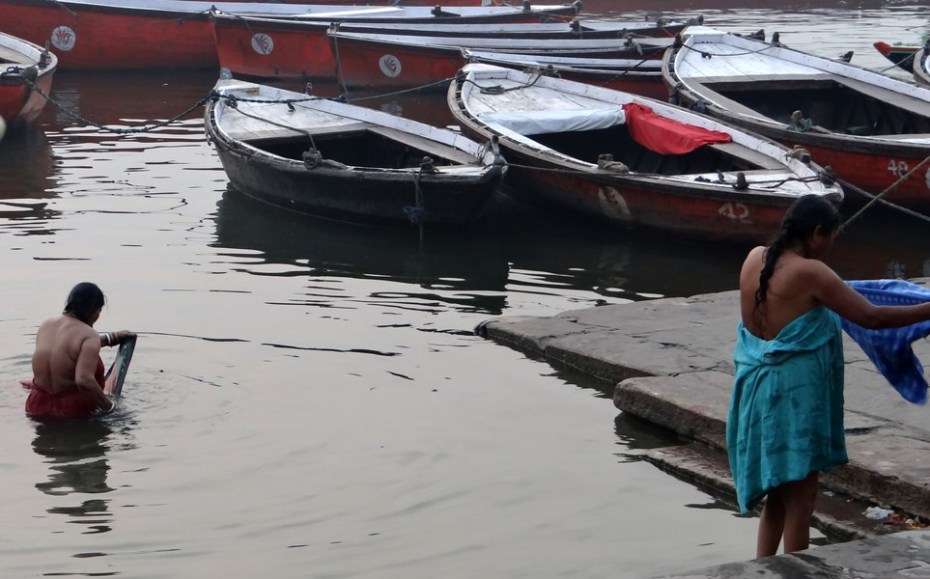 These women sought a bit of privacy among the boats.