TOURIST IN YOUR OWN TOWN.

I feel fortunate that I have a friend who not only brings me brownies, but will, at the merest suggestion, drive me downtown Murphys where we pretend to be tourists. That is Jan Stewart. Always ready to seize the day.

I hadn’t been to Hovey’s tasting room in ages, nor had I seen this clever sign. 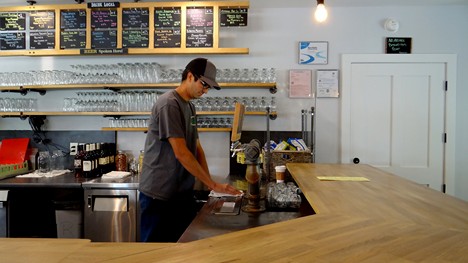 Inside I was pleased and surprised by the variety of craft beers they support. The public likes wine but they also like good beer.

Another sign drew us into Frog’s Tooth, a wine I’d never sampled.

Of course, because of Mark Twain, frogs are a prominent feature in Calaveras County, but what I liked here is the warmth and friendliness of the staff. A very inviting atmosphere. 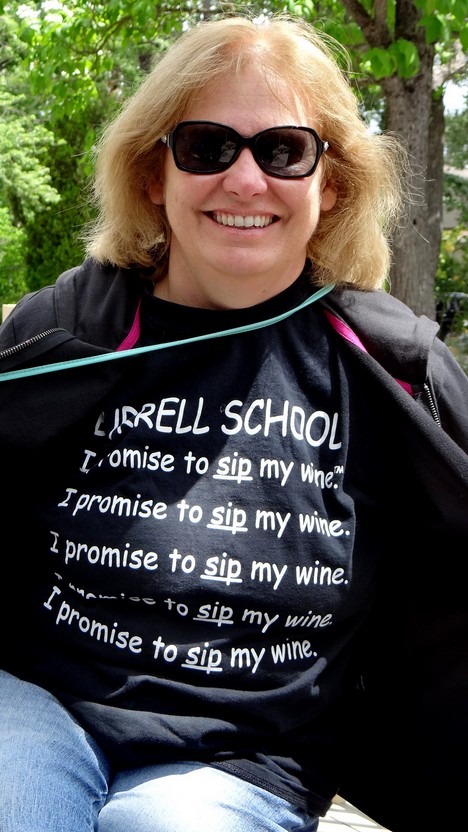 This customer is wearing a shirt from a tasting room in  an old school-house, I believe she said in Grass Valley. It reflects the grammar school punishment of writing on the black board over and over again, I Promise Not To Hit Tommy, or some such. Cute.

Town was loaded with motorcycles, all coming for the “Jumps”, as they relate to the Calaveras Fair and Frog Jumping Jubilee. Nationally famous after its small beginnings. I remember a picture of Little Flower, Governor LaGuardia who attended the Jumps as fascination with jumping a frog spread far and wide.

Both bikers, the guy on the left hugged Jan and said,”I know you!”  He is her chimney sweep. His buddy said, “If anybody had told me I’d be a biker with multiple tattoos on my body, I’d have said yer crazy.” I had to laugh to find they are locals from Murphys. Tourists just like us.

I liked this gal’s leathers and took a picture and she said, “No, no. You caught me with a phone and I’m constantly pushing people I know to put their damned phone away and look up.”  So, she posed for me on her bike.

Creative. Guess we can call her Spider Woman, and, by the way, she is from Murphys.

She looked askance at the big hogs lining the street and said, “If one of these guys tips his bike over, he will not be able to pick it up by himself.”  We concluded they are for show and pride of ownership as well as performance. 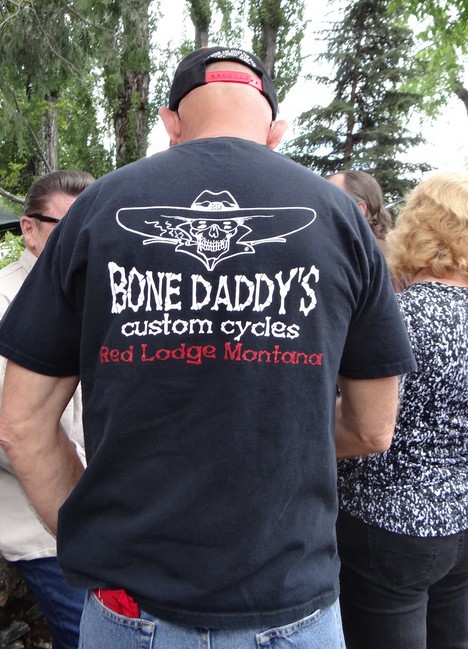 There were some out-of-towners.

I wanted a picture of this guy’s curled mustache because it reminded me of Joe Cardoza, a former neighbor and local character who grew his curled and waxed mustache about seven inches long for the local Whiskerino Contest. He had too much to drink and went for a haircut. Jack, the barber was a known prankster and cut half of his mustache off, I expect with Joe’s consent. I thought it was cruel, even so. 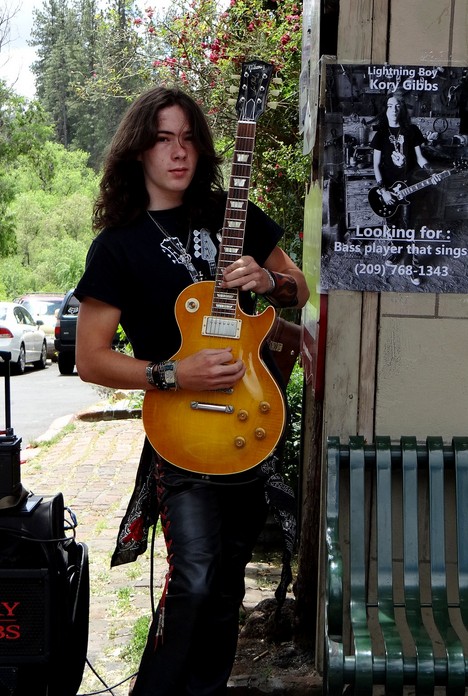 There were street musicians.

The Murphys Hotel hired a band. The courtyard was packed with people eating, enjoying the music and even getting up to dance in the tight space around the musicians.

A couple local vets told us they placed 400 flags on veteran graves with Memorial Day coming up. They do it every year.

Among  those who served I knew Norm Tanner and a couple others. Norm was a good friend to my husband. I’ll be sure to remember those close to me who were vets; I may not get to a grave, but there will be a knot in my heart has I put out the flag on my deck.

2 thoughts on “TOURIST IN YOUR OWN TOWN.”