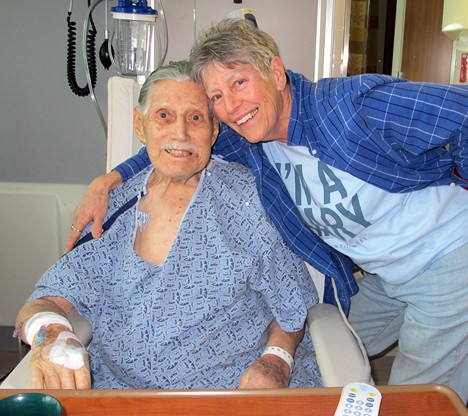 My friend, Paul, fell and broke his hip. He is 88 years old and crawled from his garage into his house and called his housekeeper. She asked him if he needed 911 and he said “NO!”  He is a very determined person and didn’t want to go to the hospital.

He was trying to eat his first meal after three days in the hospital, when I visited with him yesterday. His coordination was such that he couldn’t control the spoon, nor his waxed carton of milk, so I fed him.  A helper came in and took his tray away which still held half of his food. She didn’t ask, would you like to keep your applesauce to snack on later? I think to myself, he could slowly starve if left alone and no one would even blink an eye. No candy striper to help him eat. The local hospital uses volunteer help in the gift shop and receiving area, but none on the wards.

They will be putting him in a rest home, but my experience with that is, they are understaffed and the same thing happens. They put food in front of a person, but not much gets to where it belongs. My friend Betty, was a case in point. I’d visit her regularly and feed her because she had difficulty chewing and would take a long time to eat. Unless I stopped them, they’d whisk her food away because “lunchtime” was over, or the food was cold.

The answer is, more staff. It is expensive and cuts into profits. Medical care should not be a for profit operation. One reason I bought my property in Oregon when I did was because they had right to die laws. They now have them in California, too. I’m determined to never spend time in a rest home.  And, I’ll stay away from hospitals if it is in any way possible. And, I’ll support progressive, social reforms.