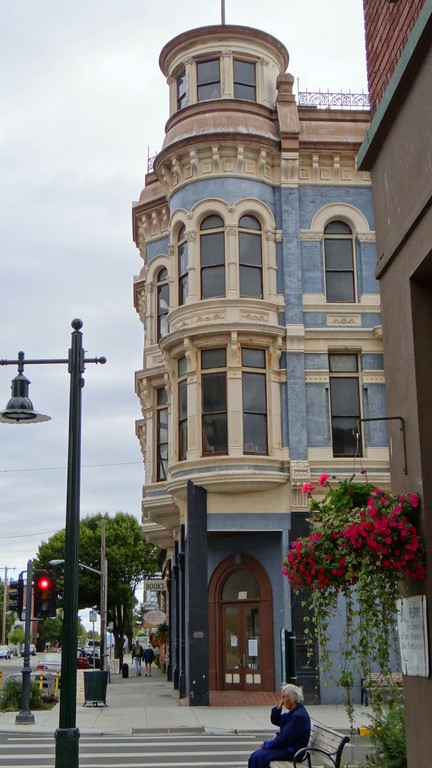 In yesterday’s blog, I kind of jumped around because I walked the waterfront then doubled back with cousin Bob. He is fun to be with, very talkative, and he likes to learn everything about a subject before he goes on to another. 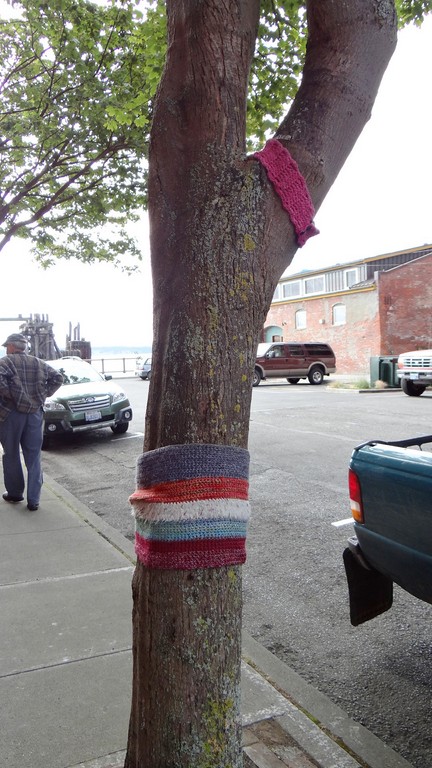 For instance, I spotted a yarn tree in its early stages; intrigued because I’d run into the original yarn tree in Turkey, so we stopped. 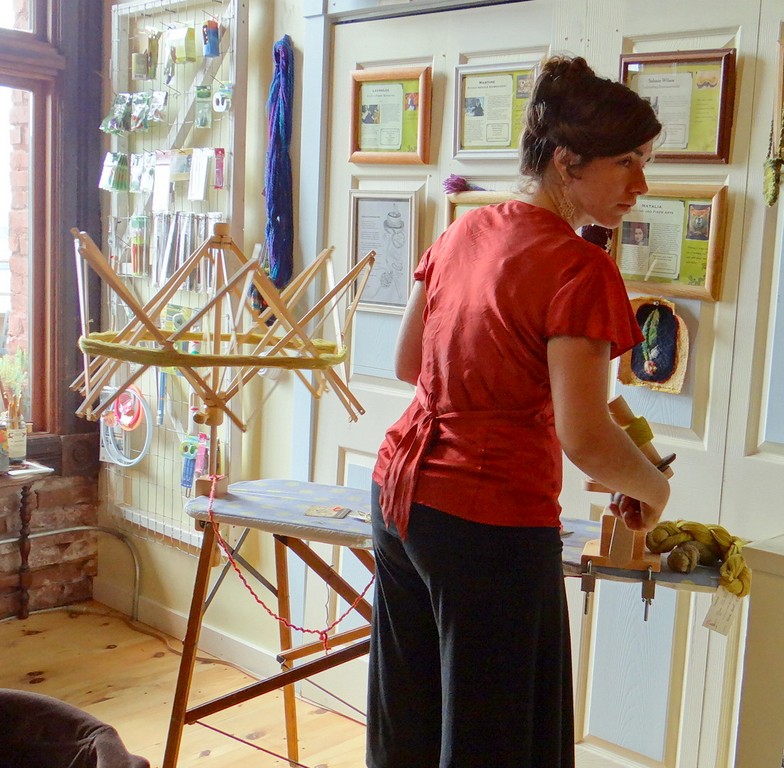 By the time we left the yarn shop, I could have taught a class in natural dyes. I tried dying wool for rugs in the early 1970’s and found out what I did wrong. Naturally dyed yarns are really big now according to this proprietor.

At a yacht riggers, I expected to see them with a yacht in the warehouse and rigging the sails. Nope!  You take classes here and learn to rig your sales yourself. Christian Toss and her husband Brian have books and videos and classes. They were beastly busy with the upcoming boat show. And since we’d already had lunch and we wanted to see a museum and a bit of an art fix for me, Bob left for his house and we continued around town.

Jim often says I make my pictures tell a story. So I’m going to let them do that.

On the waterfront is a huge patio of concrete with many panels. We guess the panels were set in as a fundraiser. No information about them. 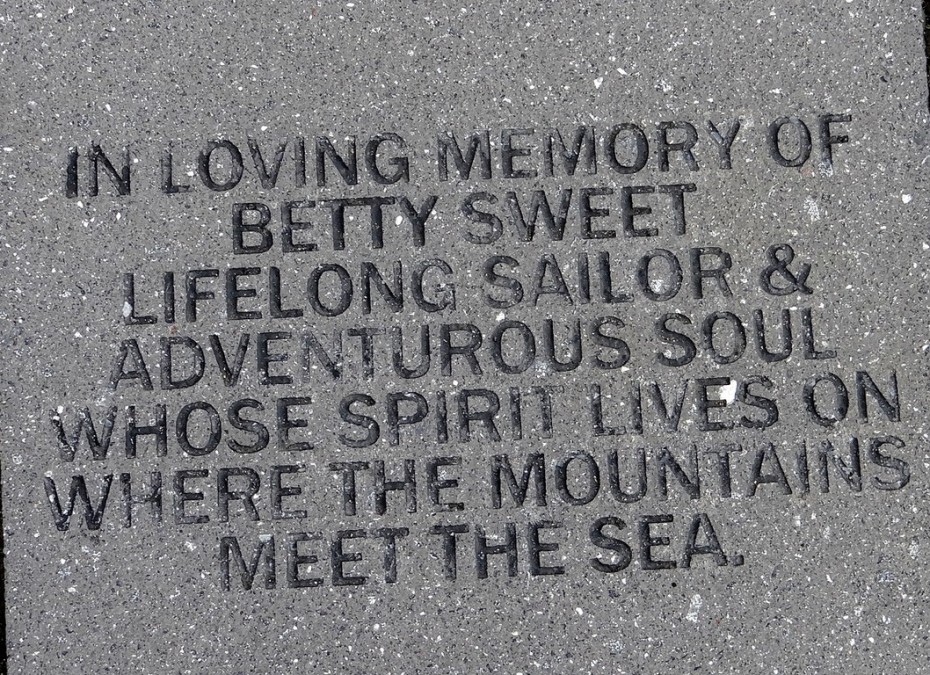 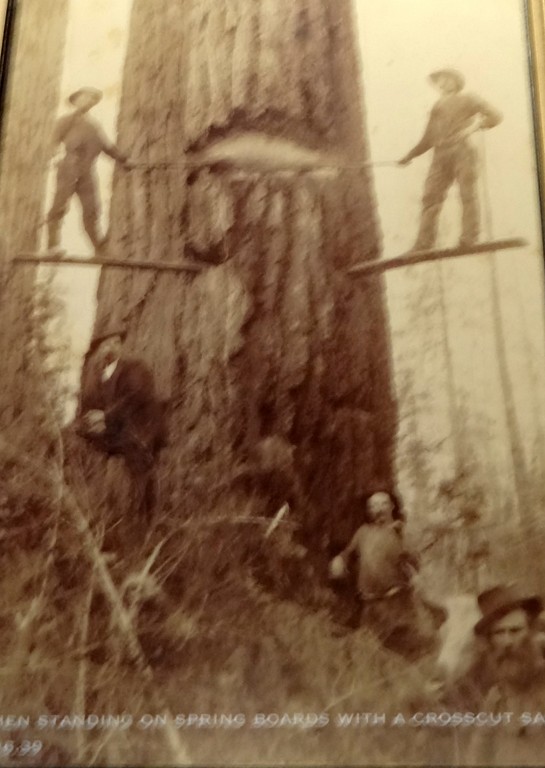 I’m going to let the museum tell a story, too. This picture of a poor original picture I include because it shows what I was seeing in the huge red cedar stumps at cousin Davids get-away camp a couple of blogs back. Wood boards inserted into the tree allowed them to cut the tree with a cross-cut saw. 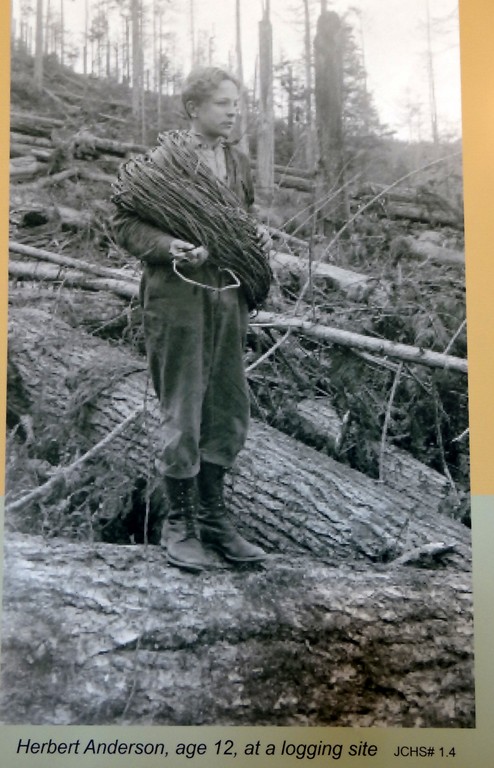 There was child labor, prostitution and men shanghaied in this community. All under the knowing eye of the powers that be.

You can double click on any of these pictures to get an enlarged view. Then back arrow to the blog again.

Prostitution was a dead-end street. Few walked away with a grand new life or pocketfuls of money except a madam and she didn’t have a free ride either.

The “good old days” were full of horror and hardship for many. But, we got from there to here and no one can change history. It helps to know where we come from and to learn from the past.

But, back to the waterfront. I got a kick out of this little boy and his dog being helpful to dad in the boat.

I laughed at this shirt. 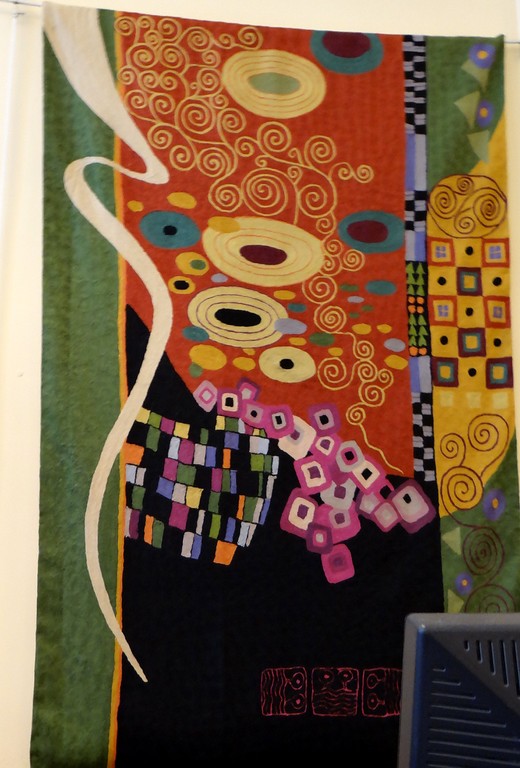 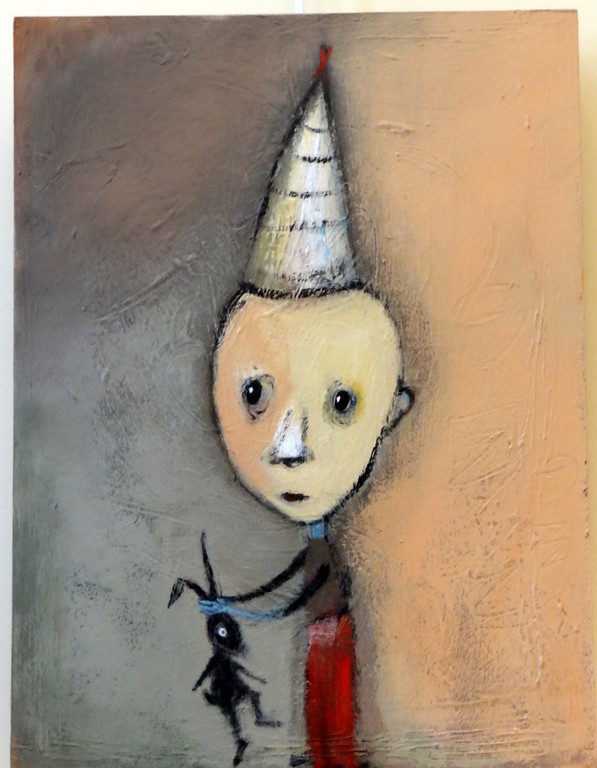 A bit of an art fix at the Williams Gallery.

This painting was in the museum. So typical here, the windblown trees. Winds can be fierce her.

My cousin told us John Steinbeck’s boat was at the other Marina. We couldn’t find out much about it, except that a guy from Salinas was willing to pay 700 thousand dollars to fix it up so he could put it in his men’s clothing store in Salinas. Why it is here?  Don’t know. Men on the dock said it was underwater for 90 days. Online, it claims 30 days. Who knows.

We drove to Cousin Bob’s house. He has let loose his farmer instincts and has a huge garden. He claims the vegetables just jump out of the ground.

He is building higher boxes for his garden out of beautiful red cedar.

I picked the last of his french beans, he picked me some tomatoes and a kohlrabi. One apple on the ground was ripe, out of three types. A nice little taste of home.