WHAT TO DO ABOUT THE HOMELESS? 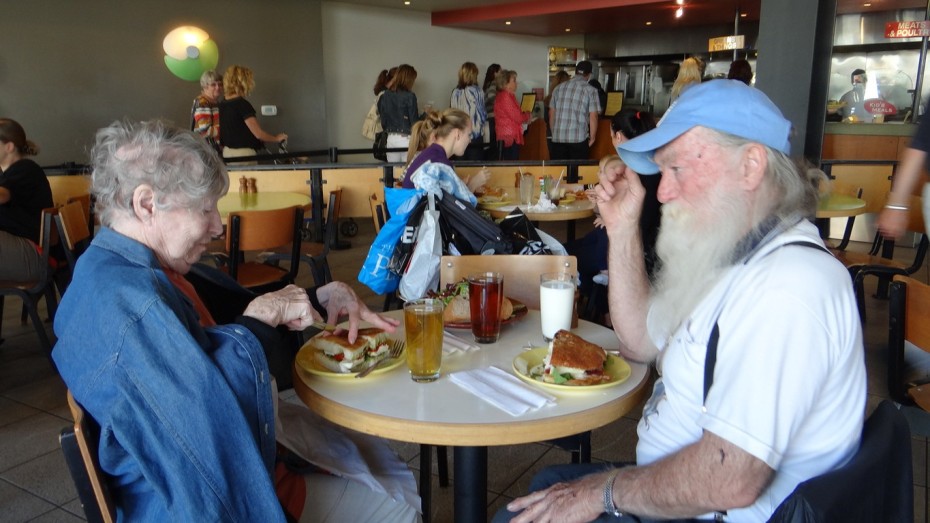 On Thursday,  I took my homeless brother to see our sister who is receiving treatment for brain cancer.  For the last three years, he got  himself onto Amtrak and my  brother Bill  picked him up at the station and he stayed  with me for a week or so,  right after Christmas.

This time, he decides  he would take a bus to Roseville, I’d meet him there, take him to visit her and he’d return the same day. I couldn’t talk him out of it. Realize he is mentally ill, alcoholic, non-violent, he’s had a stroke and can only walk about two or three blocks, then he has to sit down.  He had a huge tumor on his head removed, that is now growing back. He is very intelligent and not quite impaired enough to be committed to an institution.  Technically, he is no longer homeless. He now has a home he maintains for a property owner for permission to live there, for how long it will last is  anybody’s  guess.  He has been homeless for 17 years, but for 14 of those years, he worked for several different guys off and on. They were willing to put up with the drinking, for cheap labor, under minimum wage, but enough for him to buy food and drink. His skills were valuable enough for them to bail him out when he’d get arrested for drunkenness. Between times, he lived in the bushes, or under freeway overpasses, in a canyon by a river and so on.

Here is what happens to a guy like this.  He buys a round-trip ticket. He gets confused and arrives at the station a day early on the 9th.  He calls me on his cheapie cell phone, just a press of the button.  I tell him, go back home which is somewhere in Oakland,   and I’ll pay for a second ticket for you to arrive on the 10th. He declines and says, I’ll stay here. He has no extra clothing, toothbrush, or anything more than the clothing he is wearing. He buys his “drink” and sits on a bus bench and gets a ticket from a Roseville cop for drinking in public. I don’t know why they didn’t haul him in.  He borrowed a sleeping bag from a nearby hostel in Roseville near the bus station and slept out behind a fast food restaurant with his six pack of beer or pint of vodka,  and made it through the night.

I arrived on the 10th to pick him up, as planned. He is still pretty clean. He bought  breath mints in place of a toothbrush. He had returned the sleeping bag.

After a very pleasant visit, I drop him off at the bus station at 2:30. His bus doesn’t leave until 5:00. When he gets on the bus, the driver tells him:  “This ticket is for yesterday, you’ll have to buy a new one, but the  Roseville station is closed. We have a 40 minute layover in Sacramento, you can buy a ticket there.”

He sizzles about the  injustice of this,  (in his mind) probably sipping on a pint, and when he gets to Sacramento he tells them, I don’t have the money. He argues he paid round trip he is entitled to a round trip. Finally, after a shouting match, he walks somewhere nearby, he buys more drink. Just before the bus is set to leave,  he changes his mind and goes back to the station master and prepares to pay for the ticket but he warns them they will hear from his attorney, etc. etc. He is now drunk and foul mouthed is my guess. He has never been violent, according to his long rap sheet.  The station master refuses to sell him  the ticket and they kick him out of the station. He calls me to keep me posted and claims it is because he sinned and lied to the stationmaster about not having the money. He is a “Jesus Freak” and  practically knows the bible by heart.

Of course, I know they kicked him out  because he is drunk and obnoxious. He can’t go very far. He has to urinate and sleep somewhere. He will certainly be hungry.  I realize his cell phone will soon lose battery power. He has no place to charge it. He has no extra clothing with him. It is a cold night. He doesn’t ask for me to come and get him, he just wants to tell me what happened. I  wouldn’t go anyway, because you can’t reason with a mentally impaired drunk. I’m hoping by morning,  he hasn’t been  attacked by young punks, or stabbed and left to die in the bushes, and that he has enough money left to get a ticket home.

He didn’t get home. His cell phone is by this time dead.  He doesn’t know my number by memory, or anyone else’s in the family, only from the cell. His funds are pretty limited. He doesn’t know how to program an answering machine for his land line. He hates cops because he has been arrested so many times.  The system cannot take into account that he is impaired. In Oakland,  he has been knocked over by street punks, and his bicycle stolen. The kid was arrested, Norman went to court, got his bike back and restitution. He wrote the boy a letter of forgiveness. He has been victimized by gangs who steal what meagre funds he has. All very typical.

He worked all of his life as a very competent carpenter. He should be entitled to his carpenter’s pension, but they require you to work a certain number of quarters during the year you are entitled to retire, which he did not, so his funds,  that he contributed to all of his working years, are out of reach to him.

When he first got his social security, he presented himself to a trailer park where a for rent sign board stood at the entrance. He doesn’t shave or get haircuts. He is scruffy looking. He wasn’t very clean at that point.  He asks about the rental and the woman immediately, in his presence, takes down the sign board and says, “Sorry, we are full.”

My last call to his house was at 8:30 last night.   I called again at 4 a.m. this morning and he told me he returned home at 9:30 p.m. .  I don’t know how he got there, nor what happened to him. He said it was a long story and he’ll call me later today.  I worry about him when he is disconnected to familiar territory.

I think what a waste of human potential. There was a time when he was a valued citizen of society. He owned a 280 acre farm, and a pizza parlor in South Dakota. His clinical depression and alcoholism spiraled out of control.   It is now too late. He will never be anything but a sober, polite, kindly person during the day preaching the word of Jesus.  And a mentally impaired, foul mouthed drunk after 4 P.M.

Of course, he created his own problems.  At one time family members and friends tried to help him before it got this bad. But, he wore us out too. We refused to enable him and he doesn’t expect it. We had no contact with him for about 12 years. But, for those of you who think he doesn’t deserve help and we should have no social programs to help people like Norman, studies show that helping would be cheaper than not helping. Check out this link, if you are interested. The information was gleaned from several responsible sources if you read to the bottom of the page.

A few paragraphs from their web page.

The cost of homelessness can be quite high. Hospitalization, medical treatment, incarceration, police intervention, and emergency shelter expenses can add up quickly, making homelessness surprisingly expensive for municipalities and taxpayers.

People who are homeless spend more time in jail or prison, which is tremendously costly to the state and locality. Often, time served is a result of laws specifically targeting the homeless population, including regulations against loitering, sleeping in cars, and begging.

Now, it is unlikely Norman  would submit to being sheltered by the state or city. He too much enjoys going to court and tweaking with the system. He has an excellent understanding of the law. He spent a lot of time in the library studying the law whenever he came up against the system. He  usually  refuses a public defender and serves as his own attorney when he is arrested.   He  is not afraid of staying in jail. He will never plead or accept probation. He insists on a trial, which he always loses. But, the cost to the taxpayers for this crap is enormous. He simply serves his expensive time.

6 thoughts on “WHAT TO DO ABOUT THE HOMELESS?”