Yesterday, with the pall of the Peshtigo fire in my brain, I forgot to post we had found  my maternal grandmother’s house in Marinette. A frustrating search.  Again, one we made easily in 2006 and failed to record. (That was before I was a blogger and had a digital camera.) The house front had changed. I spoke to several neighbors but these old houses are now mostly cheap rentals for young people with kids. My grandmother, who had 12  children, moved here after my grandfather died. She bought the house with money she won from suing the company over his death. My mother was born in Marinette but never lived in this house. As the oldest, she and three sisters were married and gone by that time. I particularly cherish one family wedding at this house  when I was about 10 years old. My uncles pushed the couch and lamps against the wall and taught me how to polka and waltz on the smooth hardwood floor so I could dance at the wedding. My grandma carried her money in a pouch around her neck and when we were little, she would send us to the grocer for something and allow us to spend a penny of the change. 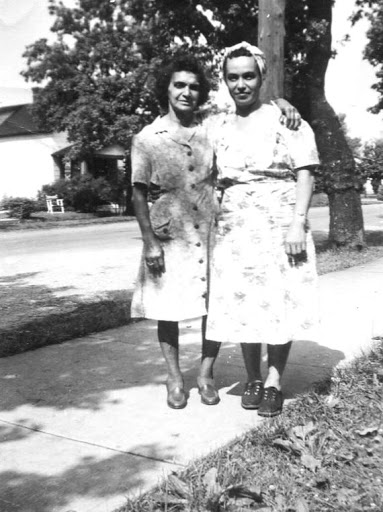 All those children.  It still boggles my mind. My grandmother was only 4 feet 9 and a half inches tall  with a tiny waist my dad would demonstrate by encircling her waist  with his  hands. My grandmother on the left with her daughter, my aunt Marietta on the right about 1950.

Our journey took us through farmland,  from Marinette & Menominee to Bark River, to visit a childhood friend. Marinette & Menominee are twin cities perched on opposite banks of the  Menominee River from each other. During the war, we had to color our margarine because the state of Wisconsin, a strong dairy state, refused to allow “colored” margarine to look like butter.  U.S. highway 41 is dotted with small towns  the names of which brought back more memories. Auggie Schultz’s bar in Shaefer where I tasted pop and potato chips for the first time. Stephenson, where an aunt and Uncle once lived. Powers, Wells, Ingolls, Wallace where once stood Lime Kilns my great grandfather buiilt.  Dagget, Carney, Spalding, all remind me of someone my dad bought piglets from or hunted with or peeled pulp with.  Nadeau where my paternal great-grandparents settled in the “Belgiantown” after coming here from Leige, Belgium  through Ellis Island. 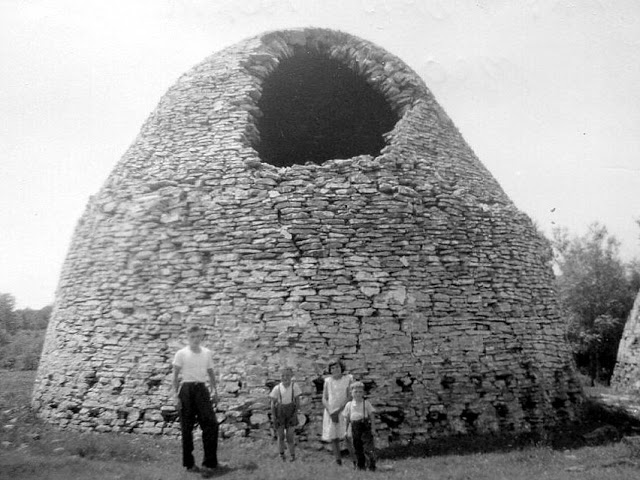 My brothers Bill, Dan, Norman and myself in front of one of the lime kilns my great-grandfather built. He came as a specialist in this type of kiln. My great-grandmother, who was pregnant made the trip alone after the baby was born.(It died.)  She traveled with trunks of household goods with four children, one of them blind. She spoke not a word of English, but she carried a sign that said Nadeau, Wisconsin on it. I would have been terrified to make such a journey.

We arrived at my friend Bernice Patrick’s farm in late afternoon. Bernice was widowed 7 years ago and her son runs the farm. She works at a local casino and we got there before she got off work. 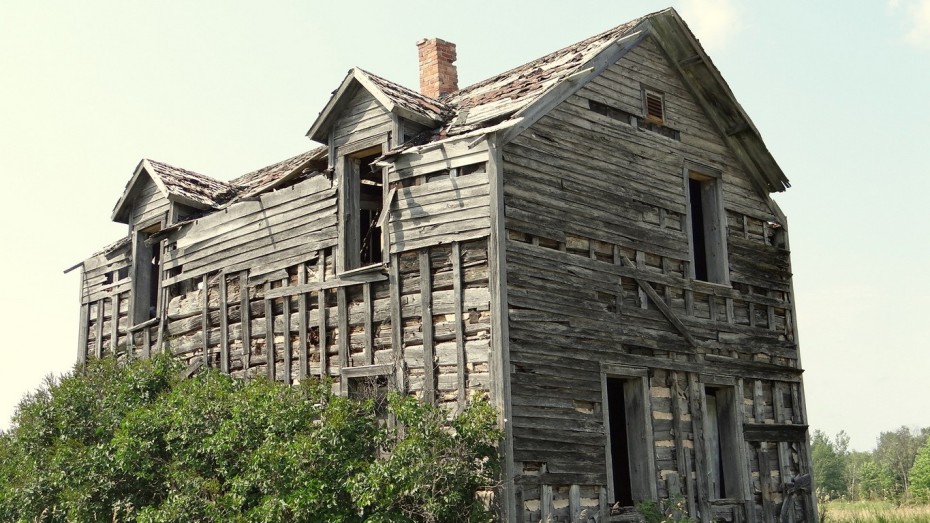 This interesting old house, a log house with chinking, was lathed over at one time. It stands on her property. Double click it for a better view. 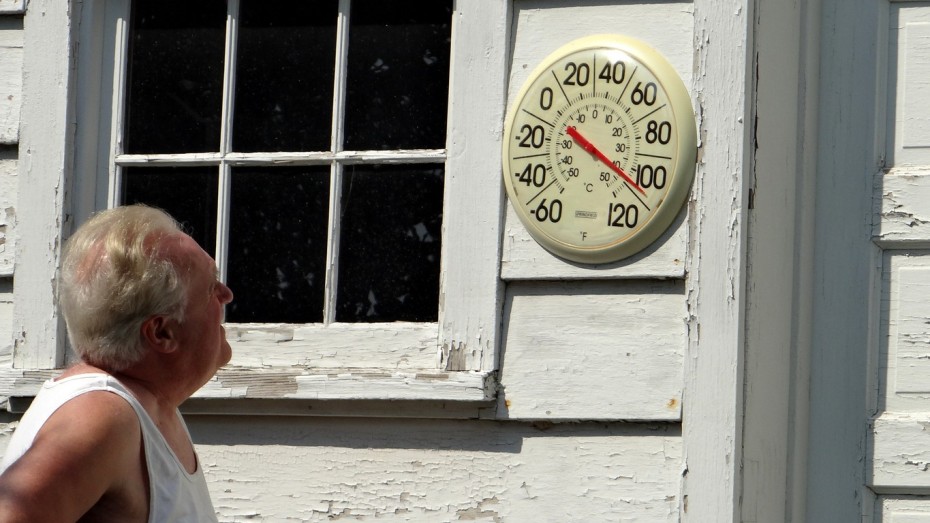 The weather wimp checks the thermometer. One of the hottest days of the year, it turned out. And, the humidity made it pretty miserable. We sat outside playing with the cat and eating apples from her orchard and watching the bulls in one pasture.

When Bernice got home from her job at the Island Indian Casino, about seven miles up the road, she likes to take off her shoes and relax. We took off our shoes and cooled off in the house and looked at pictures before dinner. 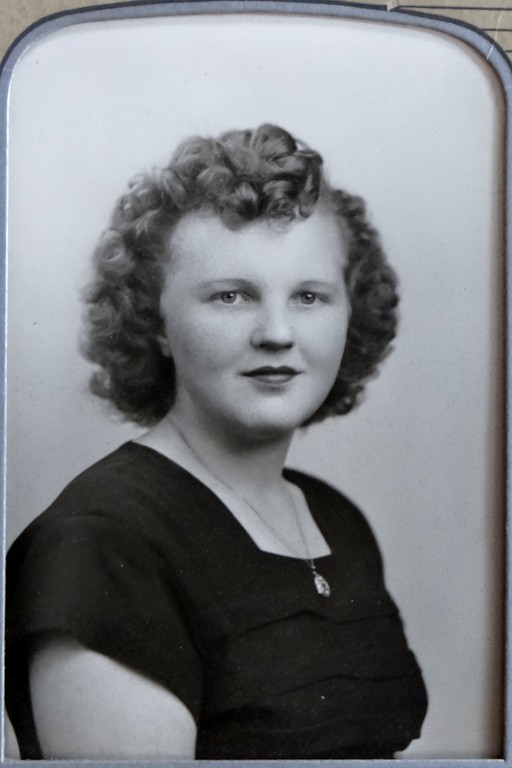 Her sister, Marie, who was my sister’s age. The Cousineau family were our neighbors and school chums when we burned out in 1948 or 1949. The bus dropped us off from school and this is what was left of or house: 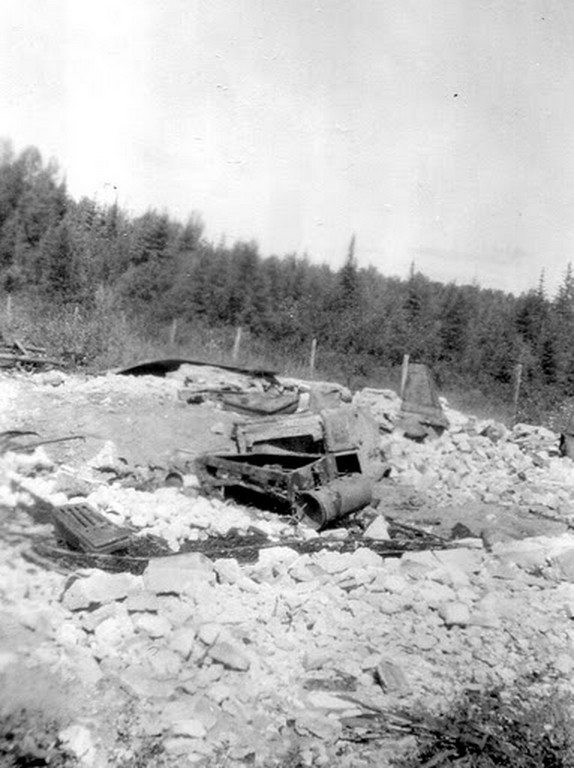 It was because of this fire that Bernice, Marie  and I met again at my home in Murphys, over 60 years later. More on that tomorrow.