Once in awhile I get a fun email from someone about products we used that kids of today have never seen nor heard of.  They are all in fun and include things like running boards, candy cigarettes, a vaporizer, penny postcards, an egg beater and so on.  What is more surprising is how many branded items we used that are still around from my own parents time such as Vicks Vaporub, Cloverine Salve, Teat Balm, Kelloggs Cereals, Kool Aid,  Henna,  Ivory Soap, Twenty Mule Team Borax to name a few.  And, then there is Arbuckles Coffee. I ran into it at Hubbell’s Trading Post several weeks back. 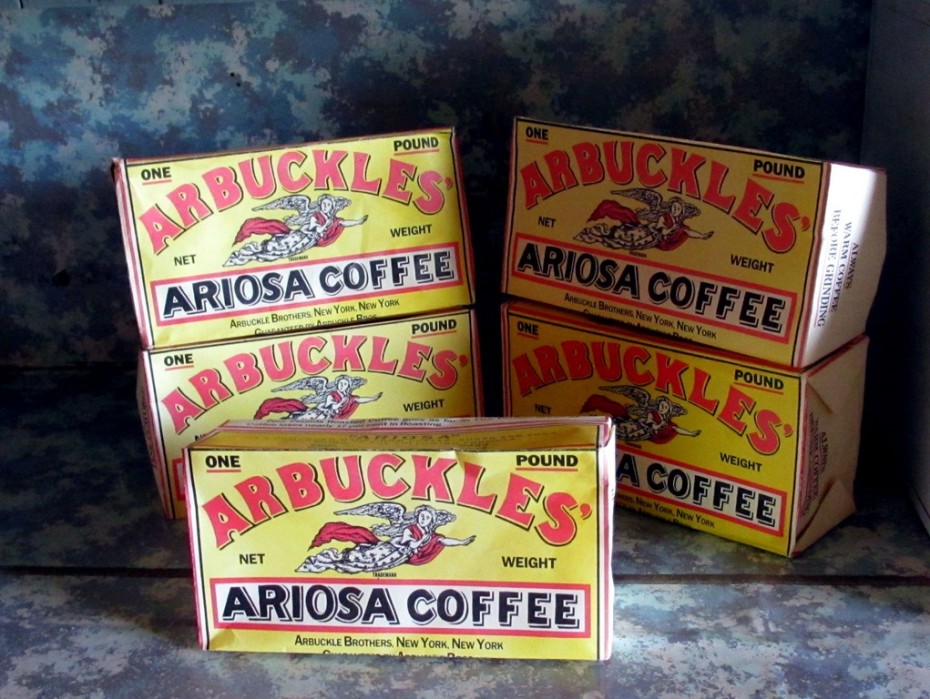 Up until the close of the Civil War, coffee was sold green. It had to be roasted on a wood stove or in a skillet over a campfire. One burned bean would ruin the whole batch. In 1865 the Arbuckle brothers patented a process for roasting coffee beans and coating them with an egg and sugar glaze to seal in the flavor and aroma.  An instant success, the coffee was shipped all over the country in wooden crates  one hundred, one pound packages,  to a crate. Especially appreciated by Western chuck wagon cooks faced with the task of keeping their hands supplied with plenty of hot coffee out on the range.  The Arbuckles, good marketers that they were, sweetened the deal by supplying coupons in each bag redeemable for razors, scissors,wedding rings and all manner of  desirable notions. And, each package of Arbuckles came with  a stick of peppermint candy.   When the cook would call  “Who wanta candy?”  Some of the toughest hands were known to vie for the opportunity of manning the coffee grinder in exchange for that little  sweet reward. I had never heard of Arbuckles coffee, but it was so popular in the Western United States, many people had no idea there was any other brand.

The docent at Hubble’s said she saw it the very first time in a western movie, Broken Trails.

To each generation is some memorable product.

And, I remember Super Suds from their radio ad.  A child who couldn’t pronounce his S’s sang the ditty:  “Tooper Tuds, Tooper Tuds, no better tuds than Tooper Tud-uh- uds.

Kinda crazy what we remember.