THE LONG HOUSE AT MESA VERDE

Mesa Verde means green table. And, for desert, this high mountain place is green.  The drive  Mesa Verde National Park at  7,500 feet was a challenging pull. The drive to the various ancient dwellings on a twisty hilly road provides you beautiful views of the valley below.

It takes 45 minutes to drive the 25 miles to the Long House. We stood in line to get tickets for our guided tour.  The tickets are only $3, affordable and young children can climb the ladders. No water or food in the canyon. When  you go, read all the rules before you start.

A panoramic view of this ancient  cluster of dwellings, set into a stone mountain suggests to me why it is called the Long House since it sits in a long crevice in the stone. ( Click on pictures to make them larger.)

The tour starts here, with these two ladders. They are easy to climb. The guide allows 90 minutes for the tour from start to finish. Plenty of time to look around and rest if you need to. 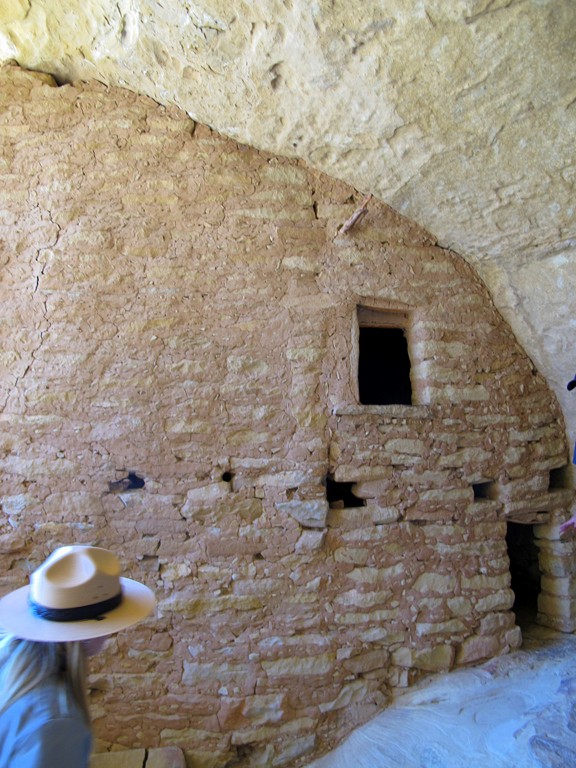 The first building we looked into was quite intact.  The Puebloan People crawled into their dwellings through a small door. Windows were often smaller than this one, and gave very little light.

This is what it looks like inside. Jim teased a little girl on the tram ride back and asked her if she would like to live here if they would install a television set.  Of course,  she said no. The climate gets very cold and very hot here.  Archeologists believe the ancient ones  spent as little time inside as possible. Mostly to store goods, sleep and cook in winter months.

Looking down into one of the dwellings shows a fire pit with a deflector in front of it.  The chimney that brought in fresh air is behind the deflector, so not to blow embers or smoke around. Smoke went up through a hole in the roof.  It is amazing to think these people lived her around 568 BC.  Archeologists  know the dwellings were continually occupied for 200 years. Then abandoned and then lived in a second time.

No one knows how many people lived in this cluster of dwellings, but their middens show they hunted elk and the bones in the midden got smaller and smaller as the years passed, suggesting they had over hunted and game became scarce.  Knowledge had to be passed down to younger generations, and the average lifespan was 32 years for men and 36 for women. They were good architects; survivors; capable of eking out a living in a sparse environment.

Building here was no easy task, picking the stones, carrying them in, making the mud. This rock shelf had a small spring at the back wall that now grows moss and mosquitoes. Life giving to the Puebloans.

In the floor were grinding holes next to the water visible as a thin layer on the right.

And on the  floor, a moccasin footprint . 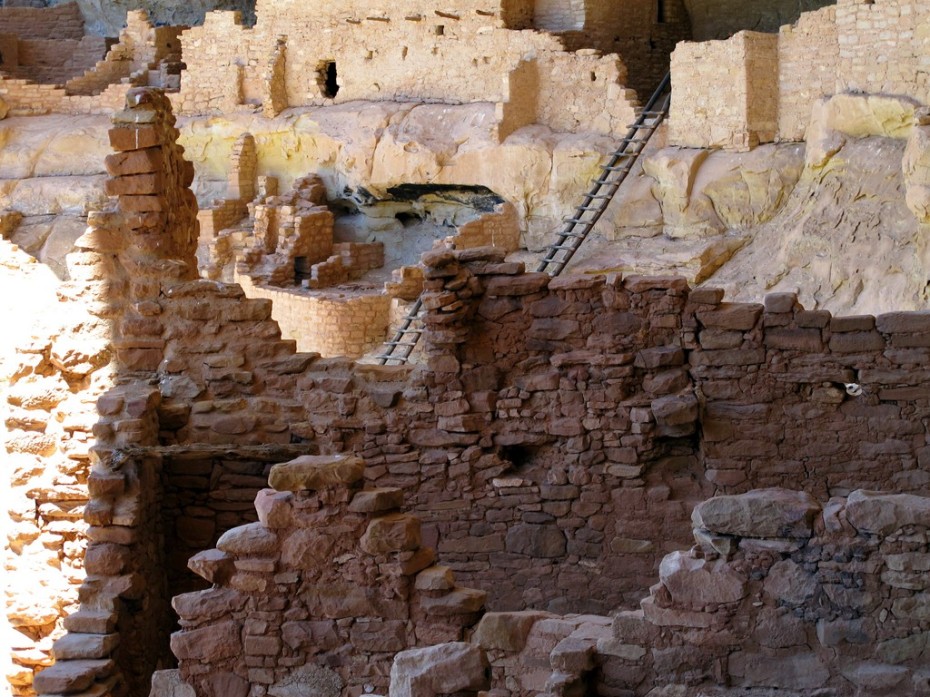 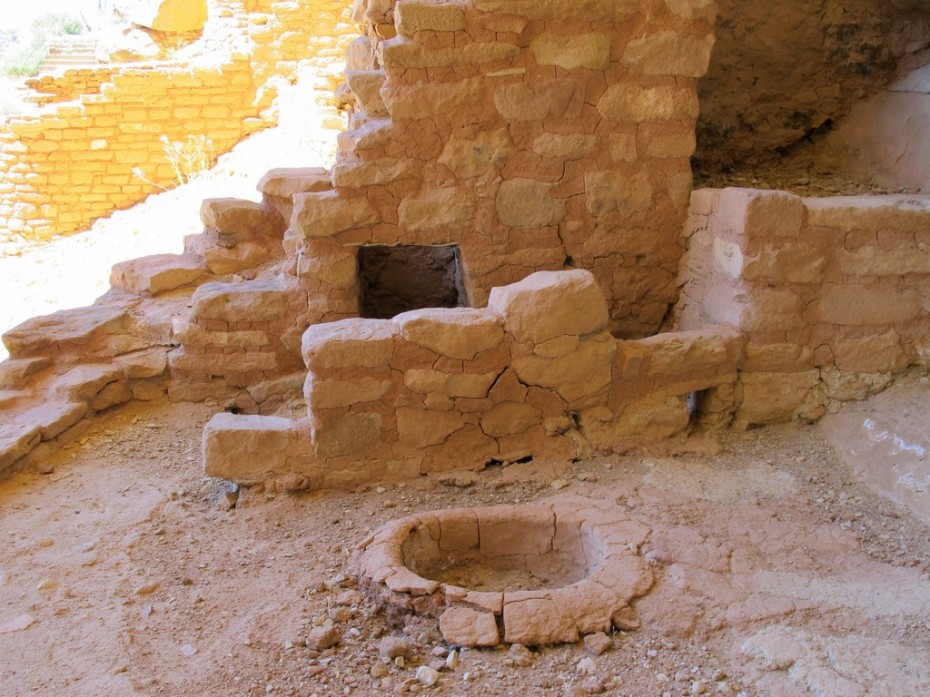 It is easy to romanticize and imagine the congenial families, children cavorting, enjoying story telling around a fire at night, women weaving, looking out over the beautiful canyon. But, the lifespan, the sparse living, suggest more work than play.

We hiked back up to our tram and got off at the Pit Houses. These ancient dwellings are covered for protection and precede the cliff dwellings.

This community of ancient peoples dug homes into the ground. We visited four covered sites  within easy walking distance of each other.

A large Kiva, where ceremonies and religious rituals  were held suggest a large community.  A drawing of what these dwellings looked like with a roof over is at one of the sites. 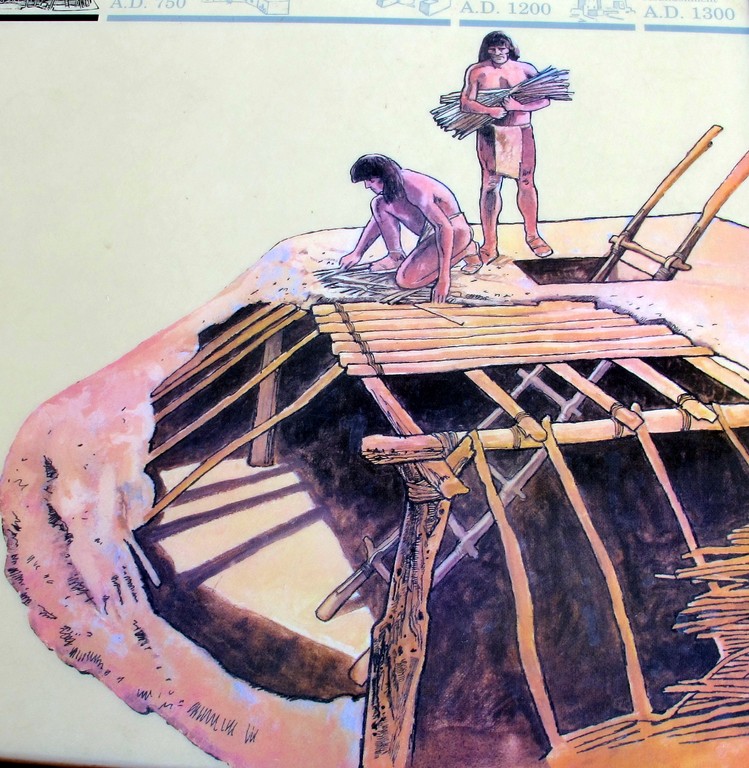 Why did they dig homes to live underground?  Why did they cease their formerly nomadic life style to live in “permanent” dwellings? One pit house had evidence of a fenced enclosure around it. Was it for protection?  To hold livestock, like turkeys?  No one knows. Archeologists suggest the planting of corn, changed their lives from nomads to farmers. They used practically every plant in the canyon for food and medicine.

I thoroughly enjoyed seeing how they lived and imagining being set down in this hostile climate and  being able to survive. For us, not possible.