Underneath An Upside Down 2.5 Ton Truck!

In the previous two Blog entries I’ve reported about a terrible accident Mary and I lived through three days ago. In case you missed those entries, here are the links…

We had reached the turnaround point in Canyon de Chelly National Monument where we stopped for a nice lunch break. Shortly after starting up again…is when the accident happened.

Now knowing that we were indeed going to go over the edge, I crouched down as fast as I could while hanging on to the metal seat handle. And then we were airborne! And rolling over! I remember thinking to myself…”this can’t be happening!” BUT IT WAS!!!

I would say, from the time I shouted my warning and the time we came crashing to the ground occurred in about five seconds.

We hit the earth with a resounding BANG as we continued to slide down the hill.

Finally, we came to a stop. Dust and dirt were everywhere…in my mouth and in my eyes.

Immediately, I started hearing others crying out in terror and obvious pain.

I immediately started hollering out for Mary. She was only a couple of feet from me. Her left arm was caught under the seat and another person was on top of her.

How do we get out of here??? All the while people are screaming and crying out for their loved ones.

After some effort Mary was able to free her arm.

Someone had finally managed to pull the person out from under the truck and off of Mary.

Shortly thereafter Mary was able to escape from under the truck via the same route.

A short distance away from me I could see a woman with anther person atop of her. The women on the bottom was screaming…”I cant breathe…I can’t breathe!” I said to her…:I can see your mouth, it is not in the dirt…you can breathe…BREATHE!”

All the while the person atop of her who was also pinned in place, in an attempt to escape, was kicking me in the face. I was wondering…how in the hell am I going to get out of here???

While considering the answer to that question, I realized my camera was in the right hand pocket of my sweat pants. I reached for the camera and managed to take this photo that shows the floor is now the ceiling!!! In the below photo you will notice two black areas, one on the lower left and one on the upper right. That’s, because, of all the dirt and dust, the camera lens protective shutters failed to open completely. Hidden below the lower left black are a couple of people wedged into place, screaming and yelling for help. In the middle of the aisle, you can see the body  of a man pinned between the collapsed seats… 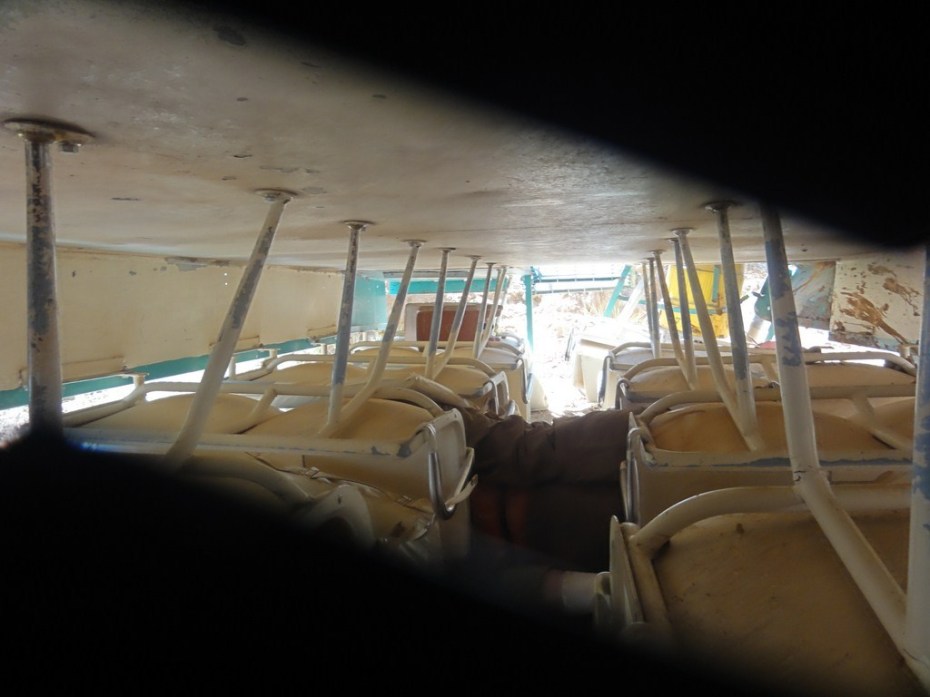 Once I was out, I took this photo of the rescuers trying to help those still under the vehicle… 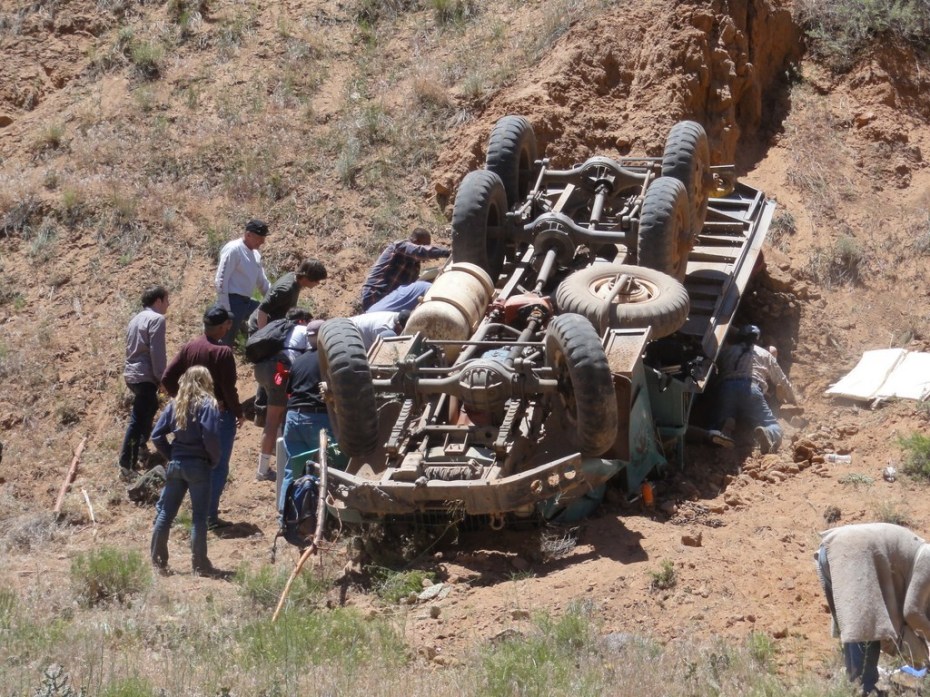 I now realize that because Mary and I were seated in the first seat behind the driver that the roof of the cab helped keep us from getting crushed and pinned to the bed of the truck like some of the others.

To say that this was a traumatic event is an understatement. I know I’ll never forget it. Memorial Day weekend will now have a new meaning for Mary and myself.

5 thoughts on “Underneath An Upside Down 2.5 Ton Truck!”