On the road to Nogales, we stopped at Tumacacori National Park, the oldest Mission in the State of Arizona, first established in 1691 by Father Kino.  The church building itself, dates from 1791. This was a huge settlement of 7,000 acres along the Santa Cruz River. The O’odham lived successfully for thousands of years along this river, but the Spanish brought them wheat and tree fruits. We think nothing of going to a Mexican restaurant and having our choice between flour tortillas or corn. The O’odham only had corn. Then figs, oranges, lemons, peaches, and pomegranates were added to their diets. Ground crops of spinach, lettuces, and a variety of beans and seeds. The river made it possible and the Spanish learned from the natives. A good exchange.

On site, this Mexican woman demonstrated the making of corn tortillas by hand, stretched very think,  and cooked in the traditional way. 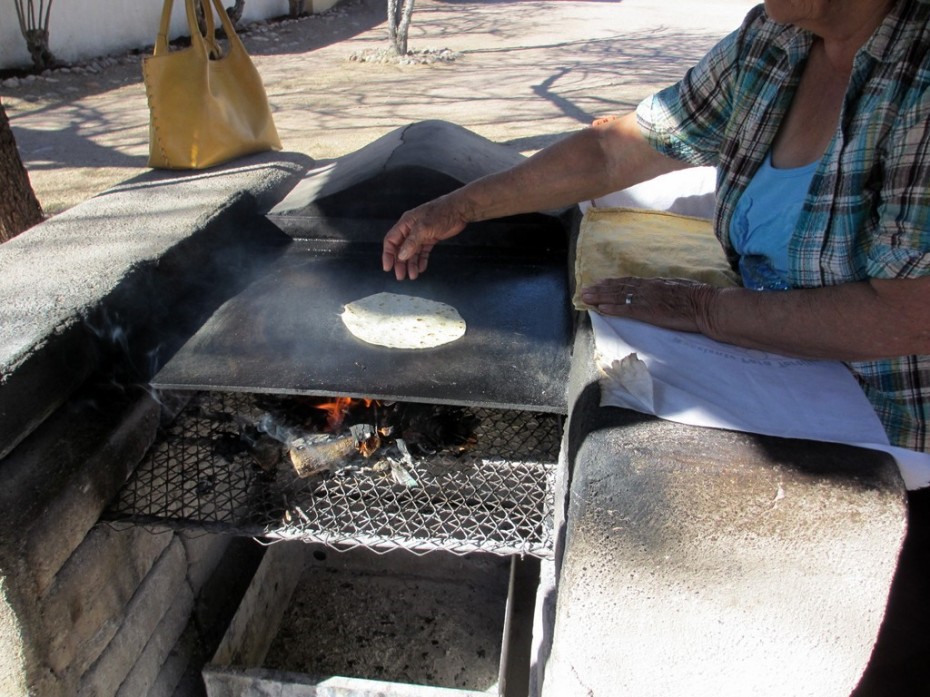 She folded in some cooked beans and gave me a tasty treat. 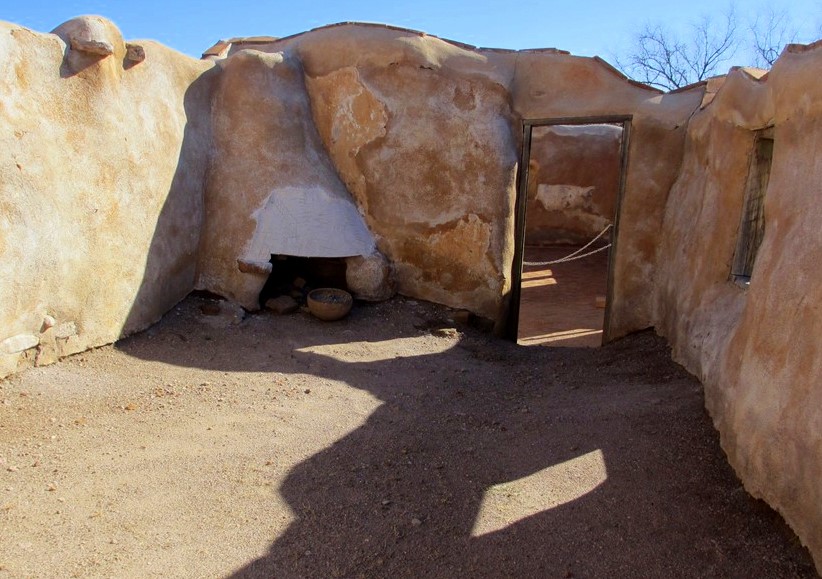 The place was abandoned in 1848 and most of the old adobe buildings eroded away or were vandalized. Cattle ran through the property and people disregarded it. The church held up quite well considering its age and lack of maintenance. 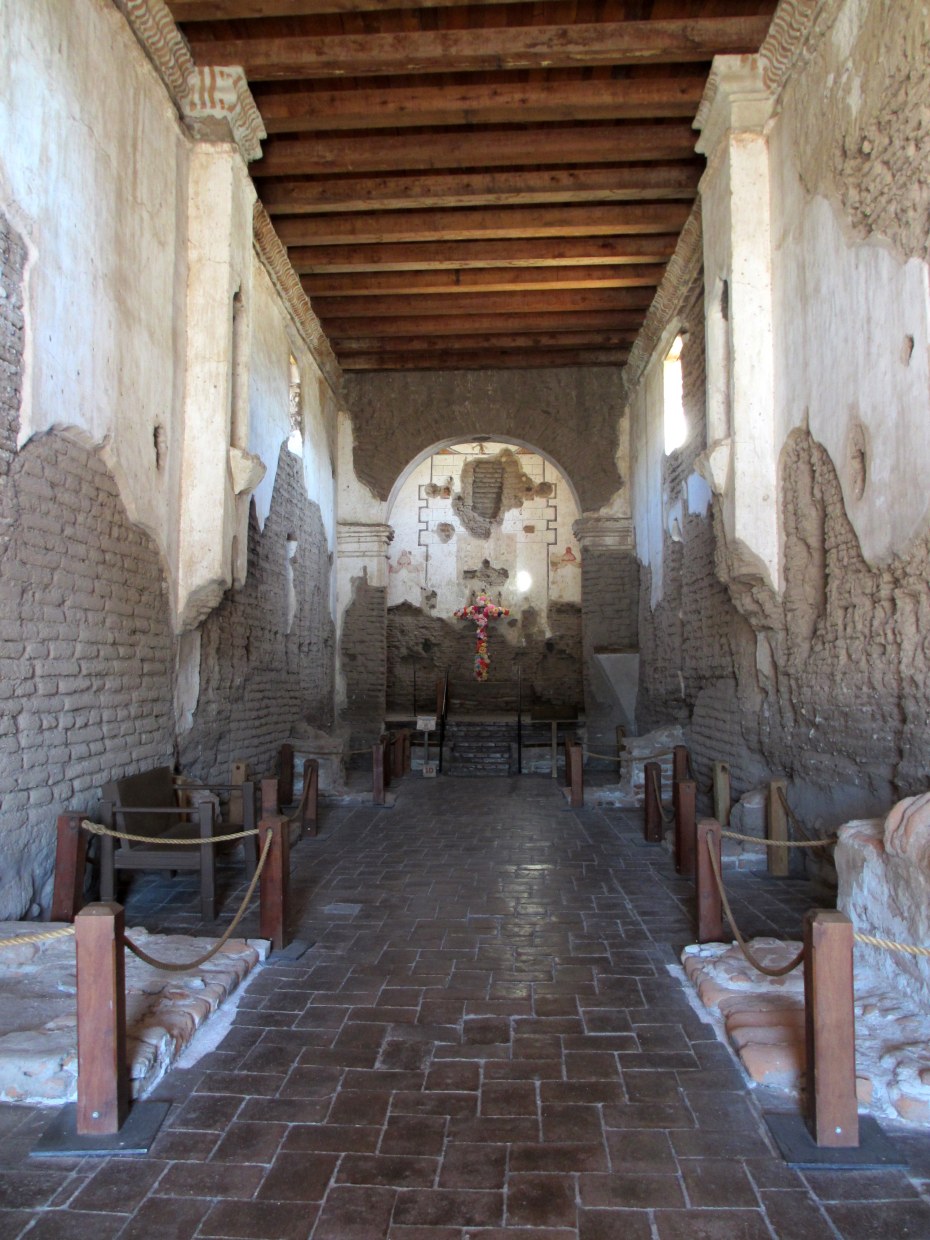 Attached to the back of the church, a store-room. The roof is gone but it survived. 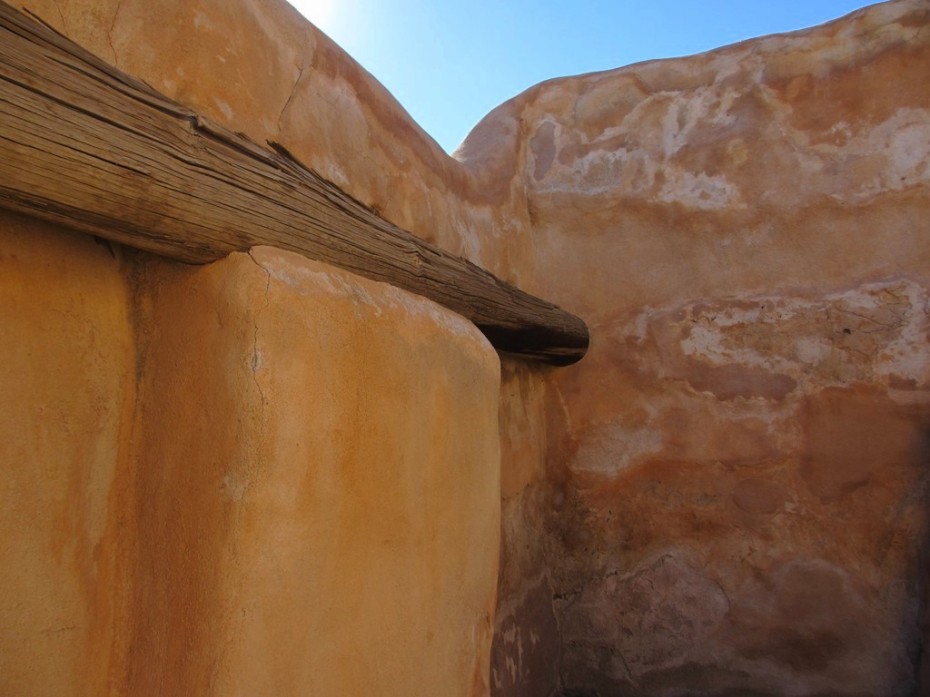 It gives you a rough idea of how the buildings were constructed. The operative word is strength. They were meant to last forever. 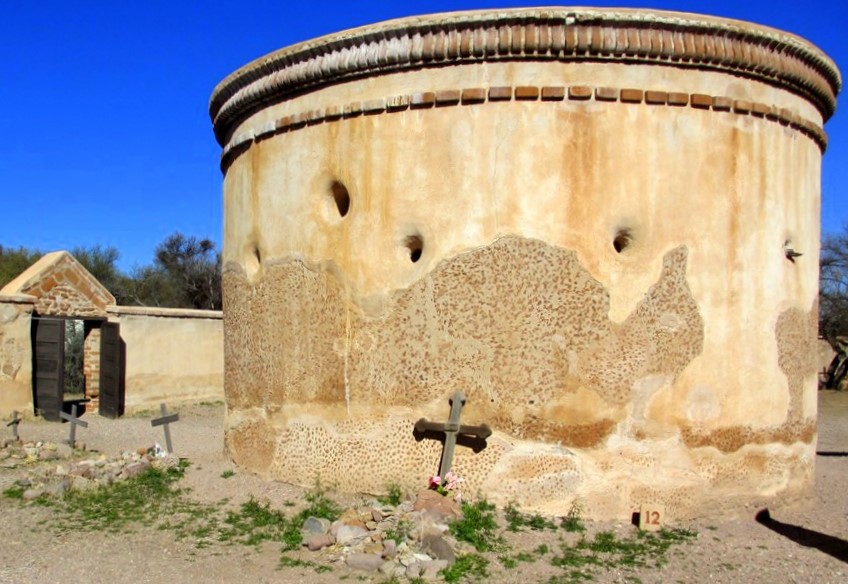 Another beautiful building was the cemetery chapel. It was meant to have a dome on it. Rain is scarce here, which certainly contributed to its survival.

The original walls surrounding the cemetery have niches for the Stations Of The Cross.

There are records of over 500 people buried here, but no one knows where they are located. Most of what was left were old wooden crosses and this one casket dating from 1916.

On site is an indian dwelling made of mud and ocotillo roofing. The area was home to O’odham, Apache and Yaqui Indians. The Jesuits had skirmishes with the Apache Indians. Spain abandoned the Jesuits and ordered all Spanish-born citizens in back to Spain in 1767.  Later the Franciscans tried to keep the mission going, but Apache hostilities, disease, lack of government support, and encroaching settlers, and finally the hard winter of 1848 doomed the effort.  It was used by locals as a church with Father Guitierrez in 1800, but poverty and the Mexican wars for independence forced the Spanish out and it again failed in 1828.

The museum is a modern adobe building and the displays are interesting and well done. 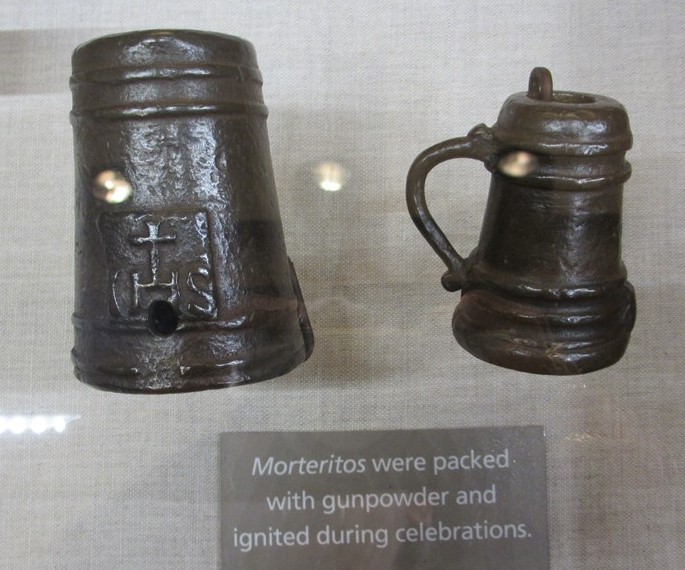 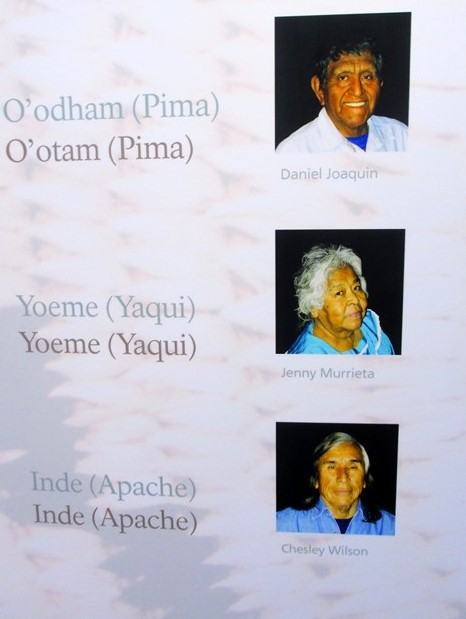 In this voice activated display,  the Apache Chesley Wilson says his grandfather spent much of his life in American prison after an Apache attack.  He wryly comments that American justice for indians was different than for others. His grandfather wasn’t part of the raiding party but the soldiers arrested a bunch of Indians in retaliation for the attack. To them it didn’t matter who attacked, just that some Apaches be  arrested in retaliation.

If you wander this way, be sure to stop. It is just north of Nogales on interstate 19.  We stopped, visited, and had our lunch in the parking area. Part of the park property protects  4.5 miles of the old Spanish Trail of Juan Bautista de Anza.  He passed through here and took 300 people to San Francisco and established a Presidio there. We walked it as far as the river.

There isn’t much left of this river. Not knowing the history of where all the water got diverted, we could see the remnants of the old high water banks.  And, the area is on a migration flyway and is now a bird sanctuary.  Those thankful bits of water still left on this planet for our birds.  We complain about government, but they have done some things right.