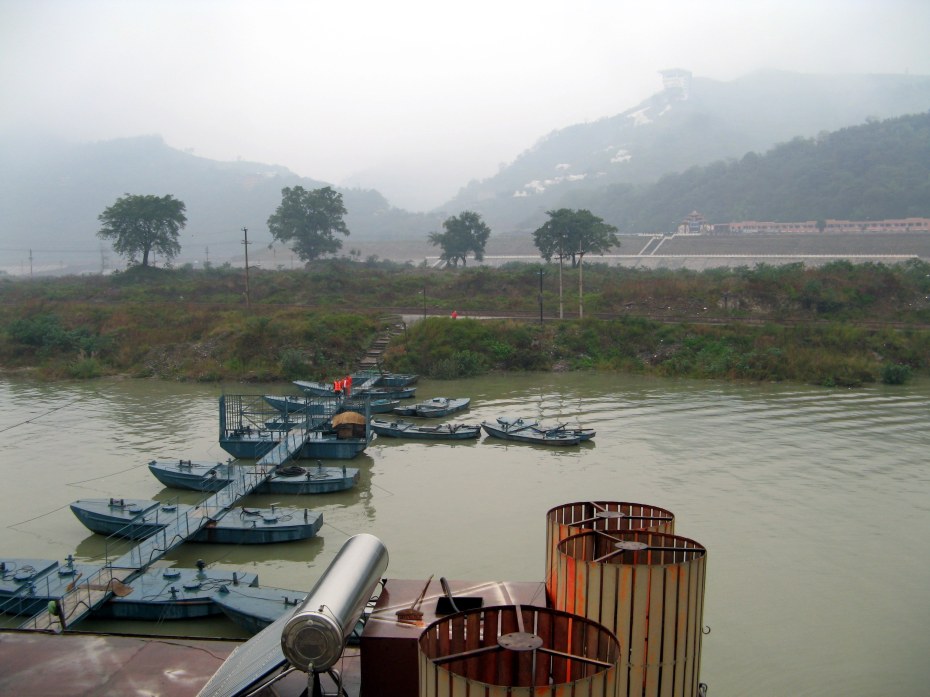 The second phase of our trip to China in October of 2006 began with an early morning flight to the industrial city of Chong Quing.  We walked from the landing (visible in the distance) across this pontoon bridge, settled our luggage aboard and then walked back across the pontoons to visit the Hell Pagoda from the Tang Dynasty.

First we climbed 200 stairs up the side of a mountain. The view of our landing below in the misty rain was exhilarating after our breathless climb. . 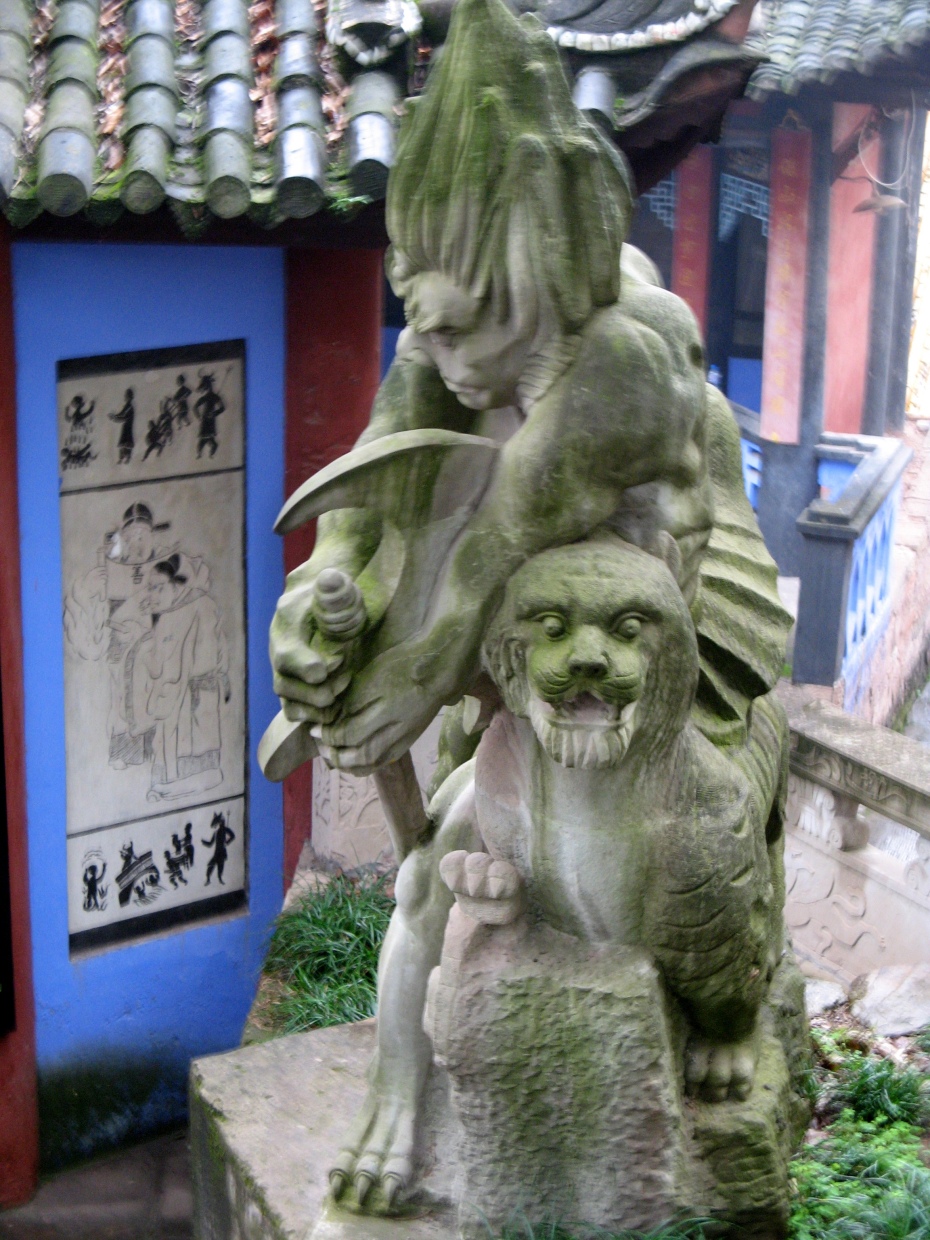 As we neared the temple, tortured statues lined the steps. 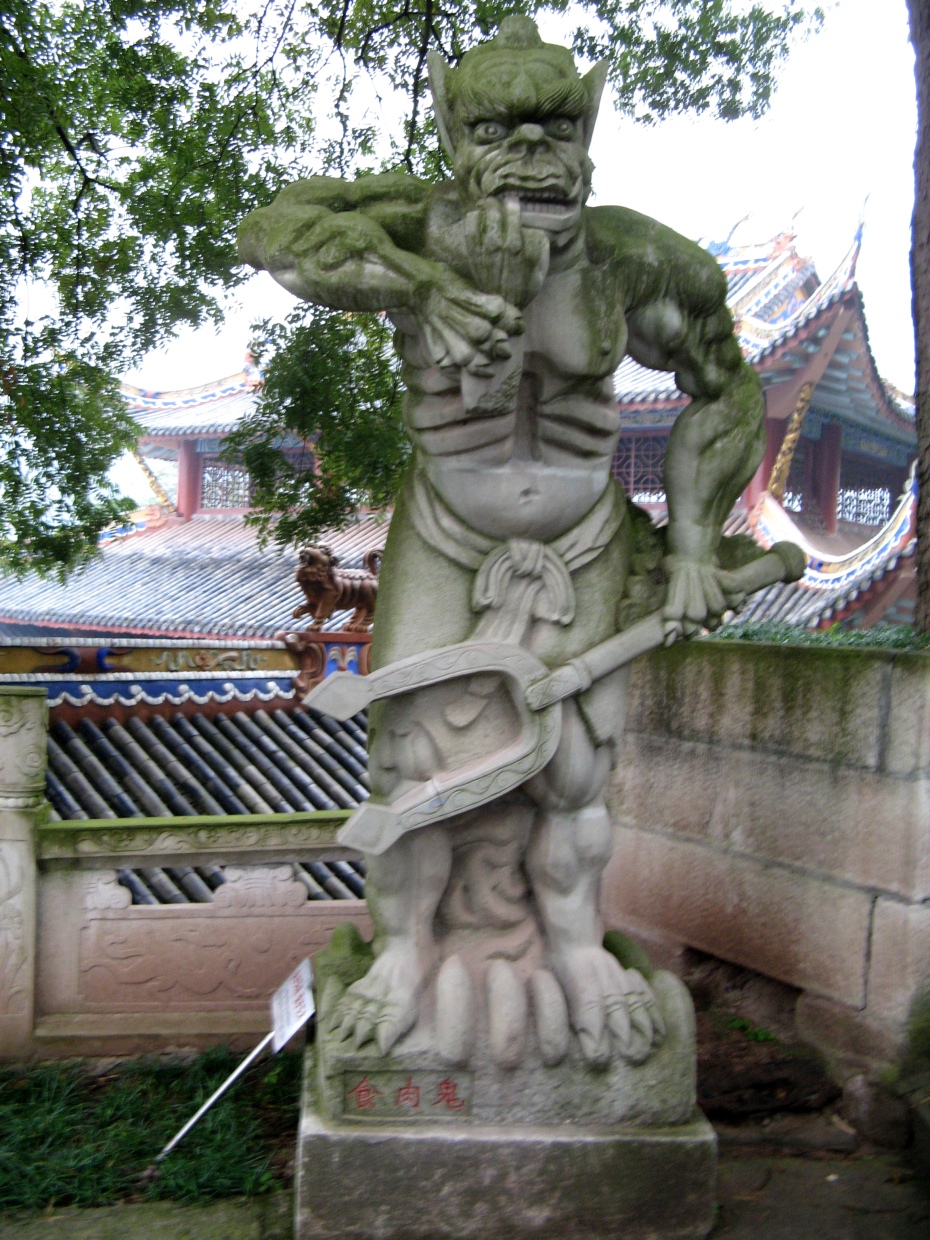 There was about  30 of them and their meaning was unclear. 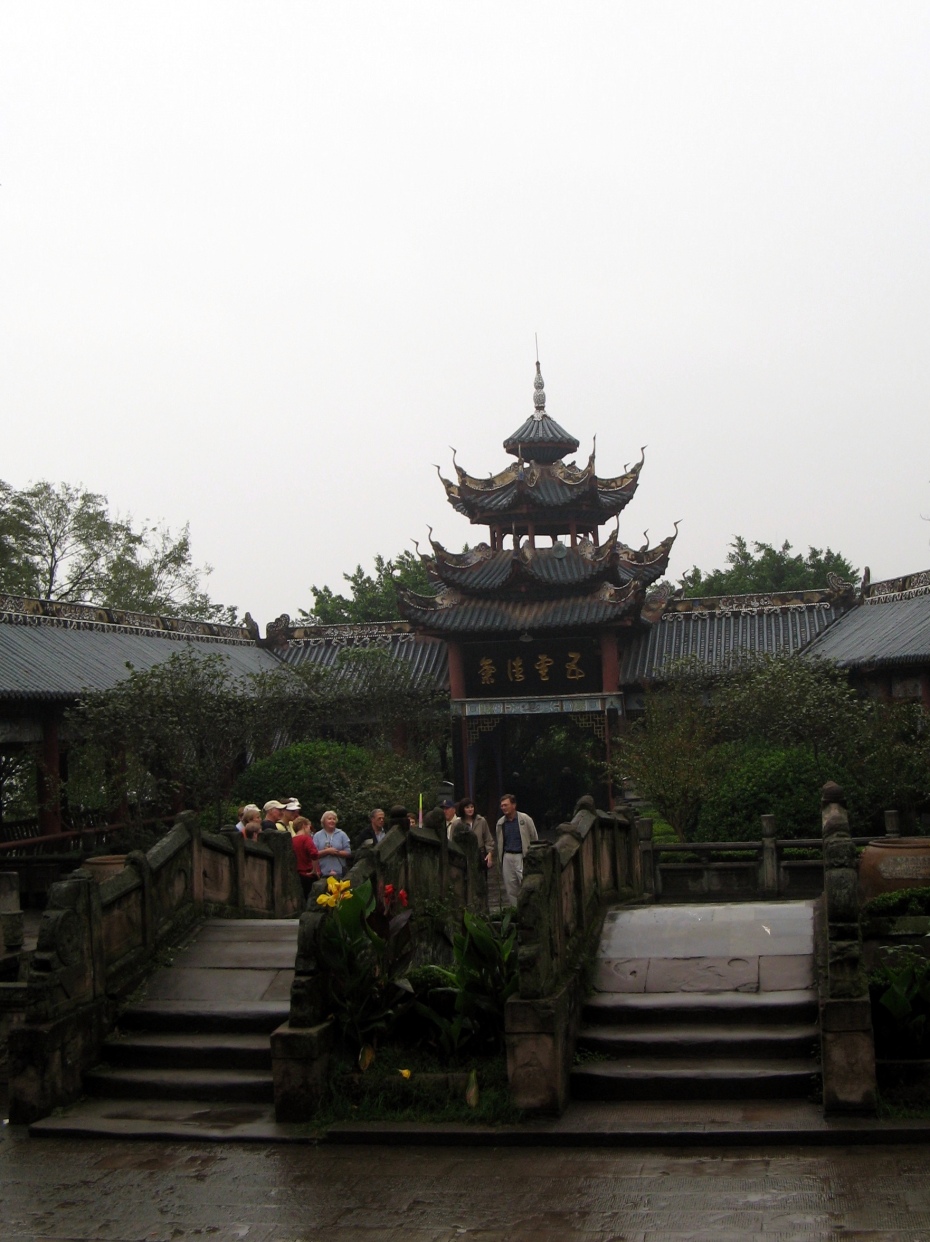 Our guide explained that this old Tang Temple is backwards from normal for modern Chinese. Almost like Christianity, you suffer for bad behavior and are re-incarnated to a higher plane for good behavior.  On our bridge to the temple grounds above, one side is for women, the other for men, unusual.

Even the colors here are different, blue and gold instead of the preferred and popular red and gold. The roof is guarded by a dragon, though.

The main pagoda has a wild geese  for the roof  decoration, in remembrance of the hungry monk at the Little Wildgoose Pagoda.   A couple of smaller pagodas had dragons. 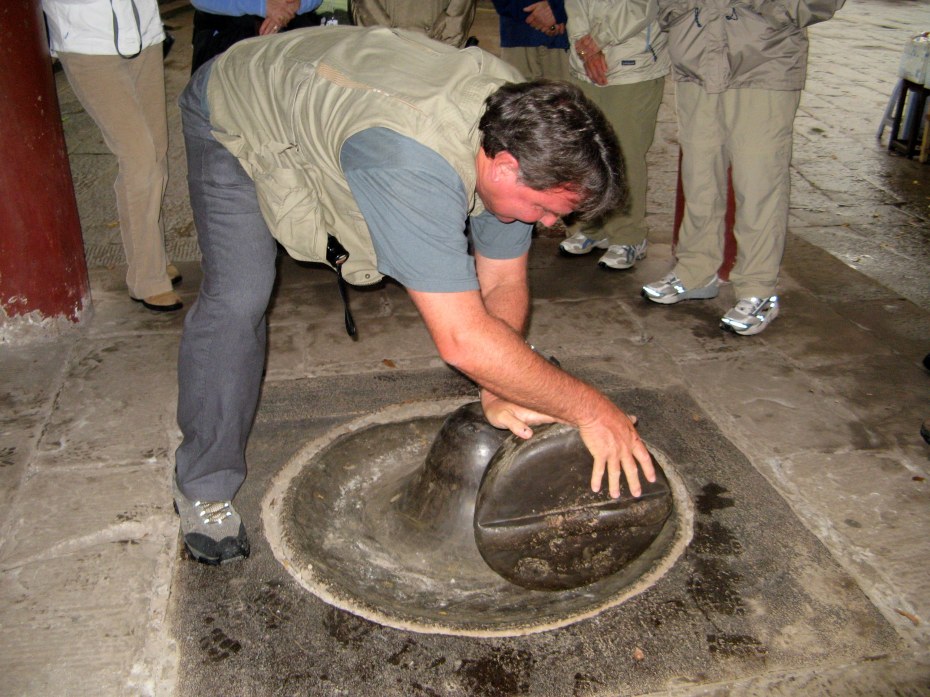 Mark Maurur from our group tried balancing the Xing Chen Stone. The bottom stone weighs about 200 pounds, the top stone about 90 pounds. If you are able to balance it, it will cure you of heart problems the legend claims. 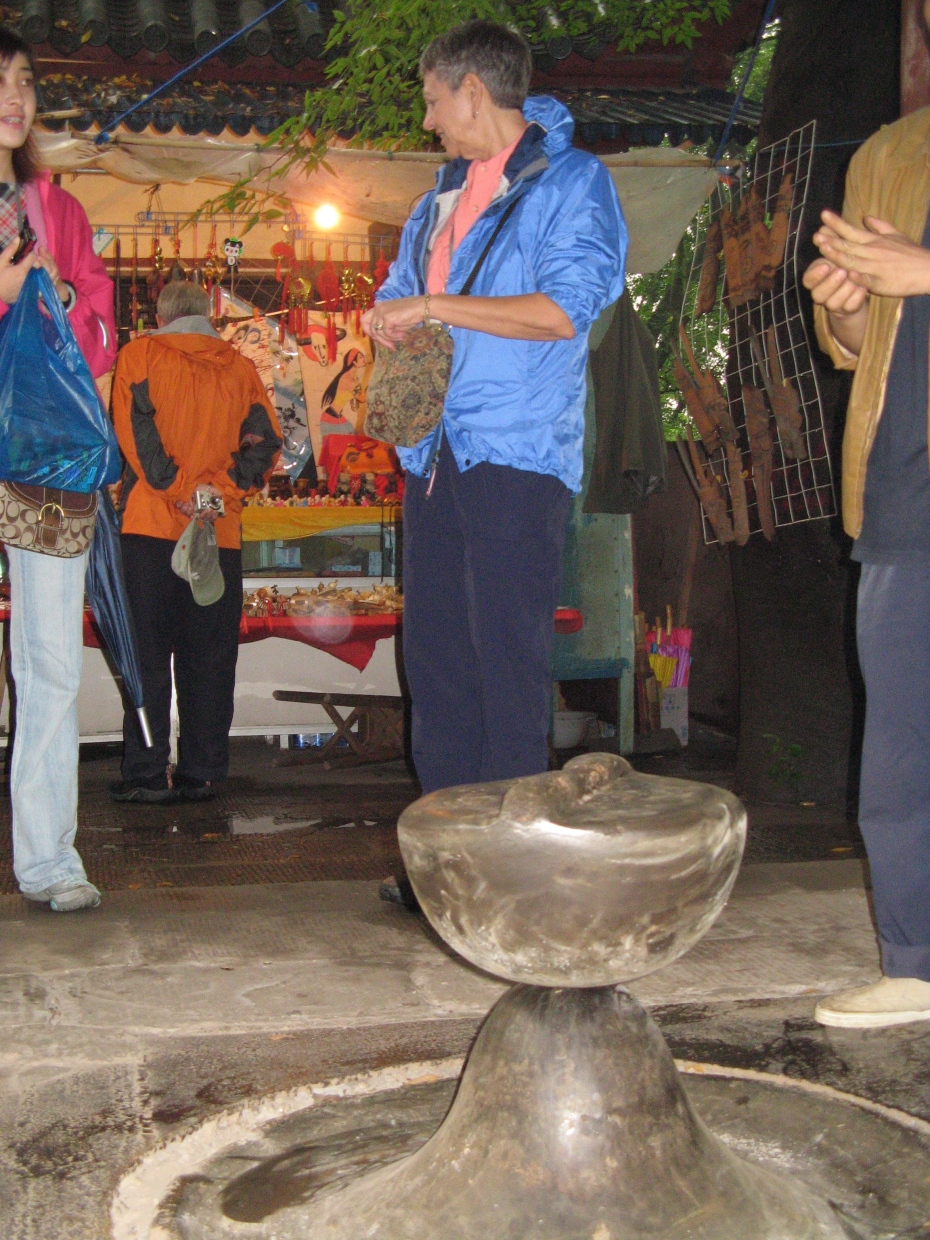 Mark  succeeded, but no one else attempted. I guess they weren’t worried about heart problems. The cure legend is unclear. Does it cure heart disease?  Or the misery of lost love? 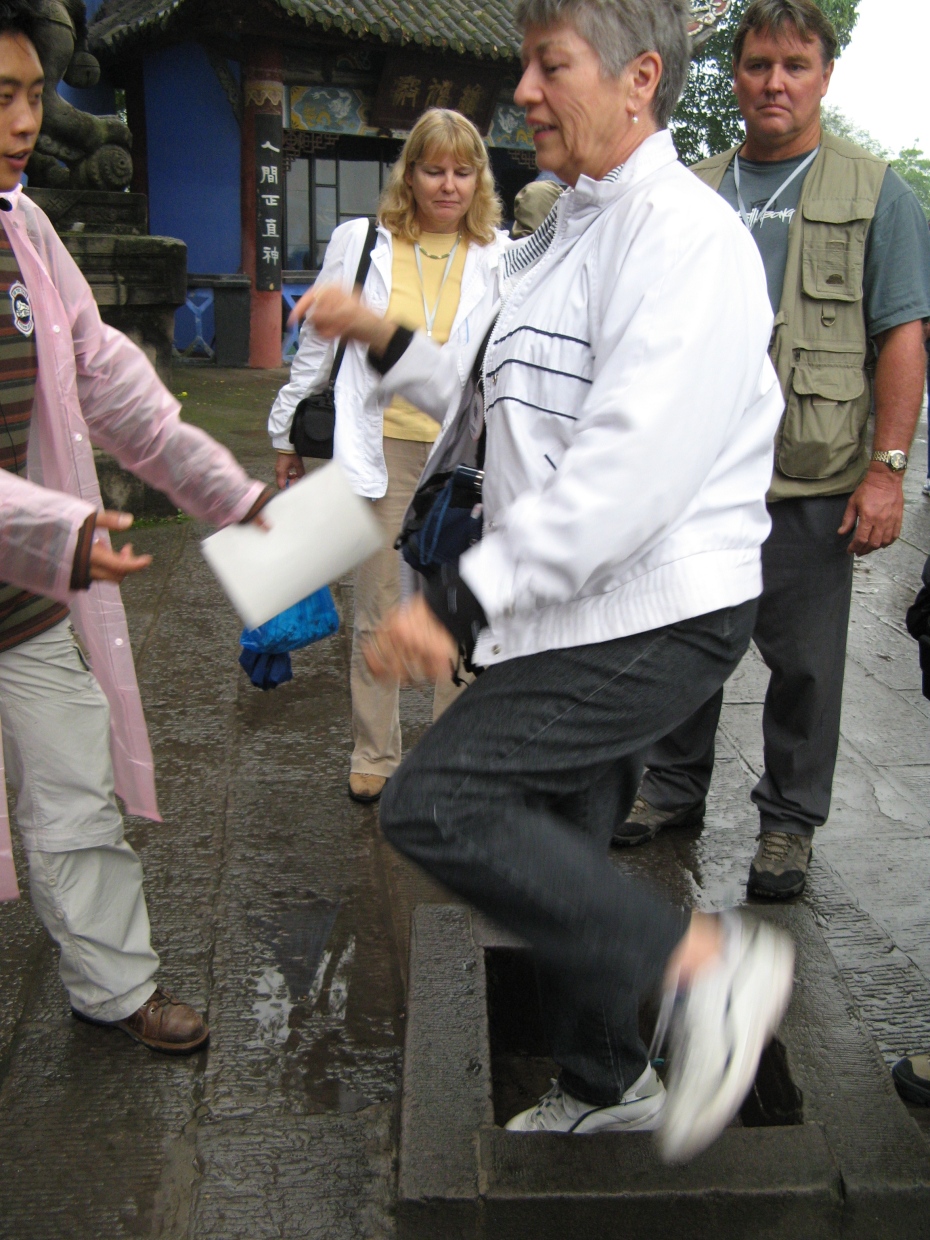 All of us attempted the balancing ball. A perfectly round ball on a perfectly flat surface. If you can maintain balance for nine seconds, you will have a long life. I guess we are all destined to die young.

In  the Hell Temple, you come across  things that are twisted and not uniform so different from the ying and yang of balance in Chinese culture.

In the temple dungeon was a ghastly parade of fearful statues behind bars, a warning to behave or else. The Tang Dynasty incorporated fear in their religion to elicit good behaviors, as most religions do. Modern Buddhism encourages good deeds while reminding you of your human weaknesses, rather than fear of punishment, if I understand it correctly.

On the way back down the hill, I was tempted to give this young child a pat.  It was the only friendly looking statue in the bunch.