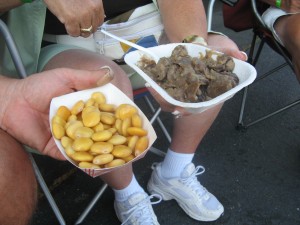 The Portuguese Festa has been a tradition in New Bedford for 96 years. Its the Feast Of The Blessed Sacrament, a celebration as old as the country from which they came. Its about celebrating life, friends, and joy in the things we share in common.
After we settled in a shaded place to listen to the music, beers in hand, Donna Parker got us started with tremoico, salty little yellow beans that people here eat like peanuts along with their beer. Also, a dish of fava beans with onions in a sauce.
Donna said, “…when I was young, I used to dance and go to the carnival. Now I come to listen to the music and eat.”  And dance, sometimes, she told me earlier. Its Donna’s goal to make sure I taste every Portuguese specialty they have to offer and the food choices are awesome.

We were located on a big square with buildings defining an L shape so that one stage had contemporary music, and another had Portuguese entertainments; music, a couple of comedians and later, Madeiren Folk Dancing. Kind of like Greek music, you want to keep clapping and tapping. 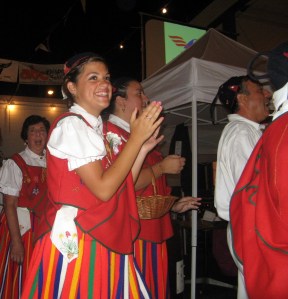 This troupe of dancers mixes young and old and is a tradition here at the fest. You discover through their comedy and music how very strong their family ties and cultural identity are. 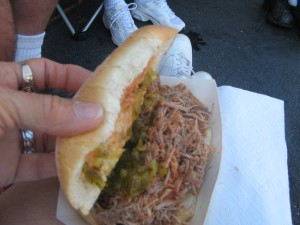 Jim had a linguisa sandwich while I had cacoila, a flavored, marinated pulled pork sandwich eaten with relish and hot sauce if you like. Its yummy but festival food isn’t necessarily the best example of the real thing, cautioned Bob. But, I thought it was great, along with a second marinated pork sandwich of a different type that  we shared. We paced ourselves and waited between tastings. Bob and I shared a cod sandwich, a salty cod with seasonings. Its made from salt dried cod, a staple  fishermen and travelers carried on their vessels when far out at sea in days of old.

We walked around to watch the people loading giant skewers for the traditional Portuguese Barbeque. It has a name that I cannot pronounce or spell, but I’ll know by the time we go to our second day of the Festa since we’ll be doing the same thing. Some people like green peppers and onions with the marinated meat that you buy by the pound along with the Stone Bread to eat with it.

Some people like to pour red wine or beer on their meat while it cooks. Everyone attends to their own cooking. 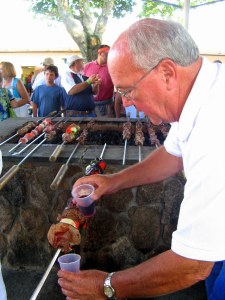 We enjoyed watching the people and families drifting by. Donna and Bob meet old friends each year. That is what its all about. 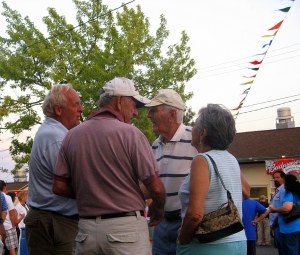 As it got dark, we could see the carnival rides, all lit up in the distance on the opposite street from the food pavilions and traditional stages.

Before we left we had a sweet treat called a marasala, a flat fried piece of dough sprinkled with sugar.  On the back stage a rock band played.

And like kids, Donna and I decided to try our luck at pop the balloon. You shoot a water gun into the clowns mouth, and the first balloon to pop wins the stuffed animal. It was worth every giggle. 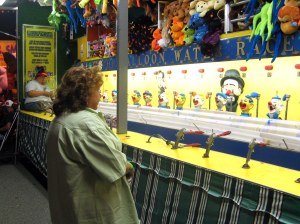 For more pictures of the festival, click on the link:
http://picasaweb.google.com/1579penn/73010PortugeseFesta#