A VISIT FROM A FOX BEFORE WE LEAVE 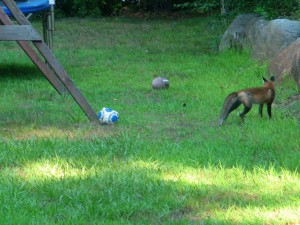 One treat while parking in son Jim’s yard was enjoying the foxes that cruise through in the early morning, usually with a mouth full of freshly killed squirrel. Moving quickly, we attempted several times to get pictures of them, without much luck. Normally, they arrive in the early half light after dawn. But, this little fellow above, treated us to a great display in the bright early morning son. We caught him on video, below:

I tried to load the 2 minute video of “foxy” but it was going to take 71 minutes and I gave it up. Here, instead is a very small snatch of the 2 minute video, a hint of the fun. He tossed his prey and played with it and danced, walked the wall,  cavorted and attempted to play with the kids half deflated soccer ball.We are on solar for several days right now at Rocky Neck State Park camping with Jim’s family. I’ll get it loaded into You Tube and provide a link to the full video some time down the line when I have full power. Its a rare sight. 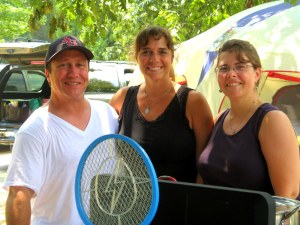 This is Jim, his sister-in-law, Kathy and wife Wendy. A family tradition for years, camping at Rocky Neck. 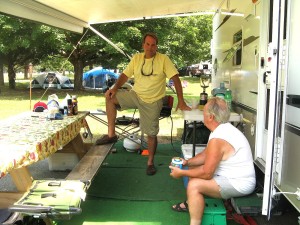 Father Jim visits with Kathy’s husband, Dave, next to their trailer where he is cooking the potatoes on a barbeque.

Jaime and cousins Sara and Ben have their own dining tent.

Stopping to talk to old friends on the road is common. The families have met other families here and meet them again and again from year to year. 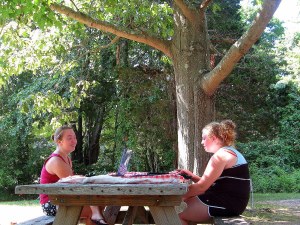 Joceylyn and Sara were able to catch a signal from the motor home and connect with friends via computer. They arrived at Rocky Neck several days ago. This camp ground does not have hook-ups. A real get-a-way for parents. 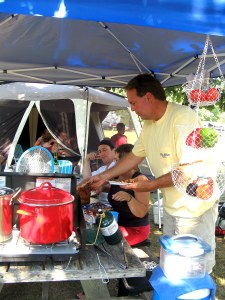 Dave seems to be chief cook, here. Later, during the evening, the moon came out and we enjoyed sitting around the fire. The kids spent part of the day at the beach or just running free with friends all over the grounds which are spacious and well treed.

2 thoughts on “A VISIT FROM A FOX BEFORE WE LEAVE”